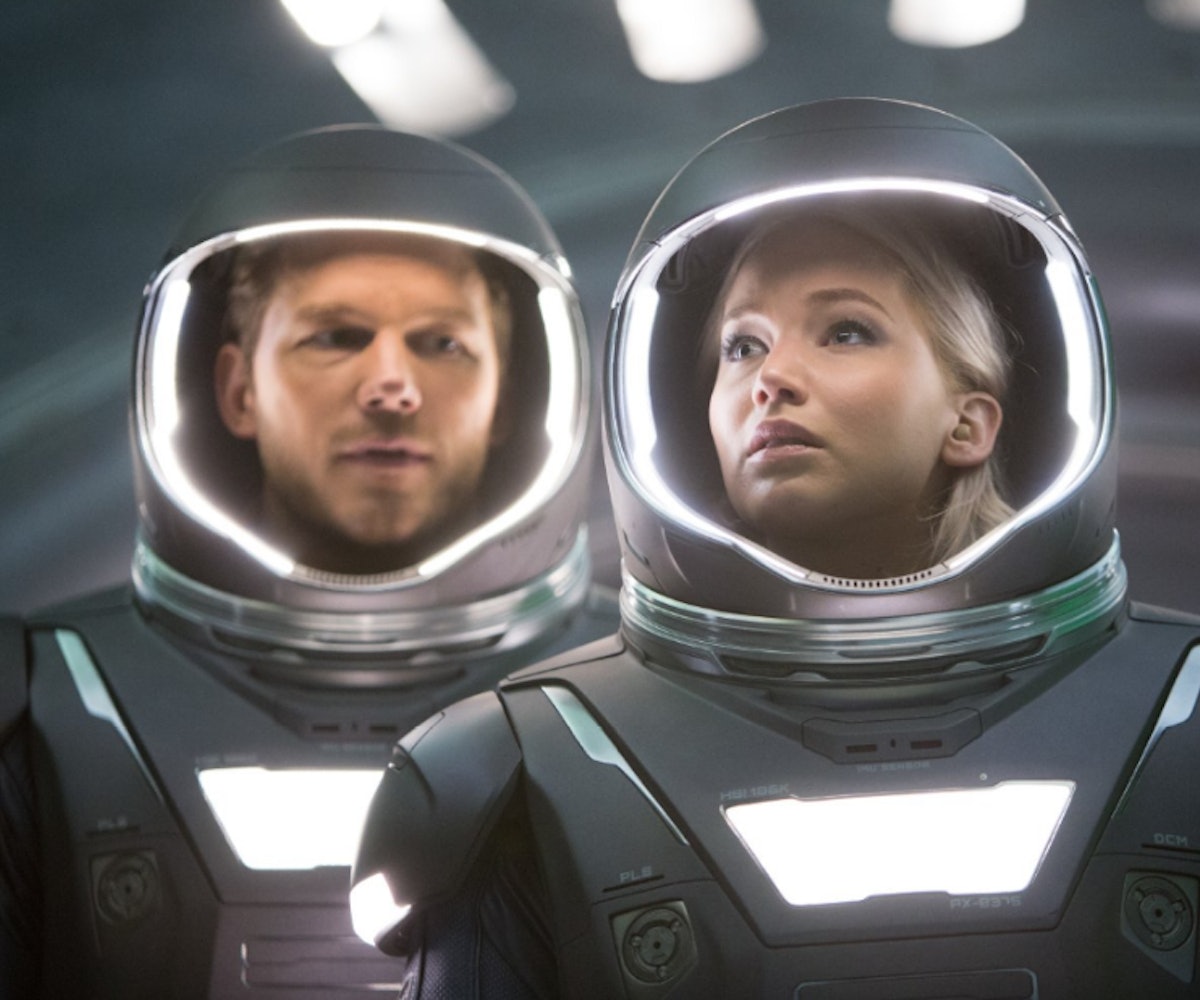 Today, Sony releases Passengers, a glossy space romance that stars Jennifer Lawrence and Chris Pratt as two Earthlings who wake up unexpectedly aboard a giant spacecraft, called the Avalon, during a 90-year trip meant to bring them and 5,000 other sleeping humans to a distant new colony so they can restart their lives. The movie has been earning less than (inter)stellar reviews, thanks mostly to a third act that devolves into an extended, formulaic action sequence and saps whatever intrigue and darkness the story had accumulated until that point (this is, after all, a movie about a man who wakes up a woman up against her will so she can live out the rest of her life with him in a giant floating mall).

But despite a market-tested climax meant to conform to audience expectations—this is a major Hollywood movie starring arguably its two biggest stars so t can’t be too risky—Passengers reflects a risk on the studio’s part that has become nearly extinct in the Franchise Age: spending a large sum of money (reports have the Passengers budget hovering near the $100 million mark) on an idea that isn’t a sequel or a comic book adaptation reboot or a live-action feature-length version of a toy. These days, that counts as a giant risk, even when you have Lawrence's and Pratt’s symmetrical faces on your poster. For all of its flaws, Passengers is essentially a sci-fi movie aimed at adults—a sub-genre that we can call “serious sci-fi”—and is the latest example of filmmakers and studios using the genre as a framework to tell (and to sell) sophisticated stories to grown-up audiences.

Lately, adults have been largely ignored by Hollywood, which chooses to spend most of its resources on dudes in capes. Earlier this fall, anyone unfamiliar with the cerebral filmmaking of Denis Villeneuve might have mistaken Arrival for a pyrotechnic alien invasion blowout in the vein of Independence Day. The movie’s marketing materials teased monolithic spacecrafts that hovered ominously over Earth, along with the tagline “Why are they here?” There is no doubt scores of ticket-buyers were surprised when, expecting to see a landmark or two blow up or a president deliver an inspirational speech, they got Amy Adams in a makeshift lab using linguistics to unpack mysterious alien code instead. Instead of a scrappy crew of fighter pilots storming the mothership, the climax of Arrival featured Adams making a breathless... phone call.

Many reviews called Arrival a sci-fi movie “for adults,” implying that usually when a UFO shows up in a movie, it’s to abduct cash from teenage boys. But Arrival, which only cost about $50 million to make, was a hit with both audiences and critics, earning $24 million on its opening weekend, and currently sitting at an enviable 94 percent on Rotten Tomatoes. It’s a strong contender for a Best Picture nomination at the Oscars and has made many critics' Top 10 lists. It is maybe the best example of serious science-fiction, an artful movie about memory and grief that just happens to involve aliens.

Arrival is adapted from Ted Chiang’s short story The Story of Us, which means it’s not a wholly original idea, but in a Hollywood wasteland littered with failed YA adaptations and sequels nobody asked for, a fairly obscure short story doesn’t exactly qualify as valuable IP. The same can be said for last year’s runaway hit, The Martian, Ridley Scott’s zippy space odyssey about an astronaut (Matt Damon) stranded on Mars. That movie, which did get nominated for Best Picture and grossed $630 million globally, was based on Andy Weir’s 2011 novella of the same name and was a risk for 20th Century Fox, the studio behind the movie. Before The Martian, Ridley Scott made the disastrous flop Exodus: Gods and Kings, and Matt Damon, movie star that he is, doesn’t always guarantee butts in seats (see: We Bought a Zoo). What audiences responded to was the movie’s space-age optimism and the pristine execution of its out-there concept.

Last year also introduced audiences to Ava, the alluring AI at the center of Alex Garland’s surprise hit Ex Machina. Garland, who wrote and directed the contained sci-fi thriller, packed his movie with big ideas about what it means to be human, while also delivering more traditional killer robot genre thrills. Ex Machina only grossed $37 million at the global box office, but with a budget of just $15 million was still considered a hit. Garland’s follow-up, next year’s Annihilation, is another original sci-fi idea that stars Natalie Portman as a biologist who heads an expedition into an environmental disaster zone where, if the title is any indication, things go horribly wrong.

You could argue that this trend toward serious sci-fi began in 2013 when Alfonso Cuaron’s Gravity became a success story on every level. The Mexican director’s uncompromising vision of an astronaut (Sandra Bullock) lost in space paid off in the form of more than $700 million at the global box office and 10 Oscar nominations. An original idea cleans up with both audiences and critics? Unless your name is James Cameron, this almost never happens. The following year, Christopher Nolan brought audiences back to the cosmos with Interstellar, a poignant family drama and heady metaphysical exploration disguised as a mass-audience space odyssey. It was another original sci-fi concept that catered to more serious-minded audiences and proved that movies asking Big Questions, ones that aren’t afraid to confound and challenge audiences, have a place at the multiplex, as long as they reach for the stars.