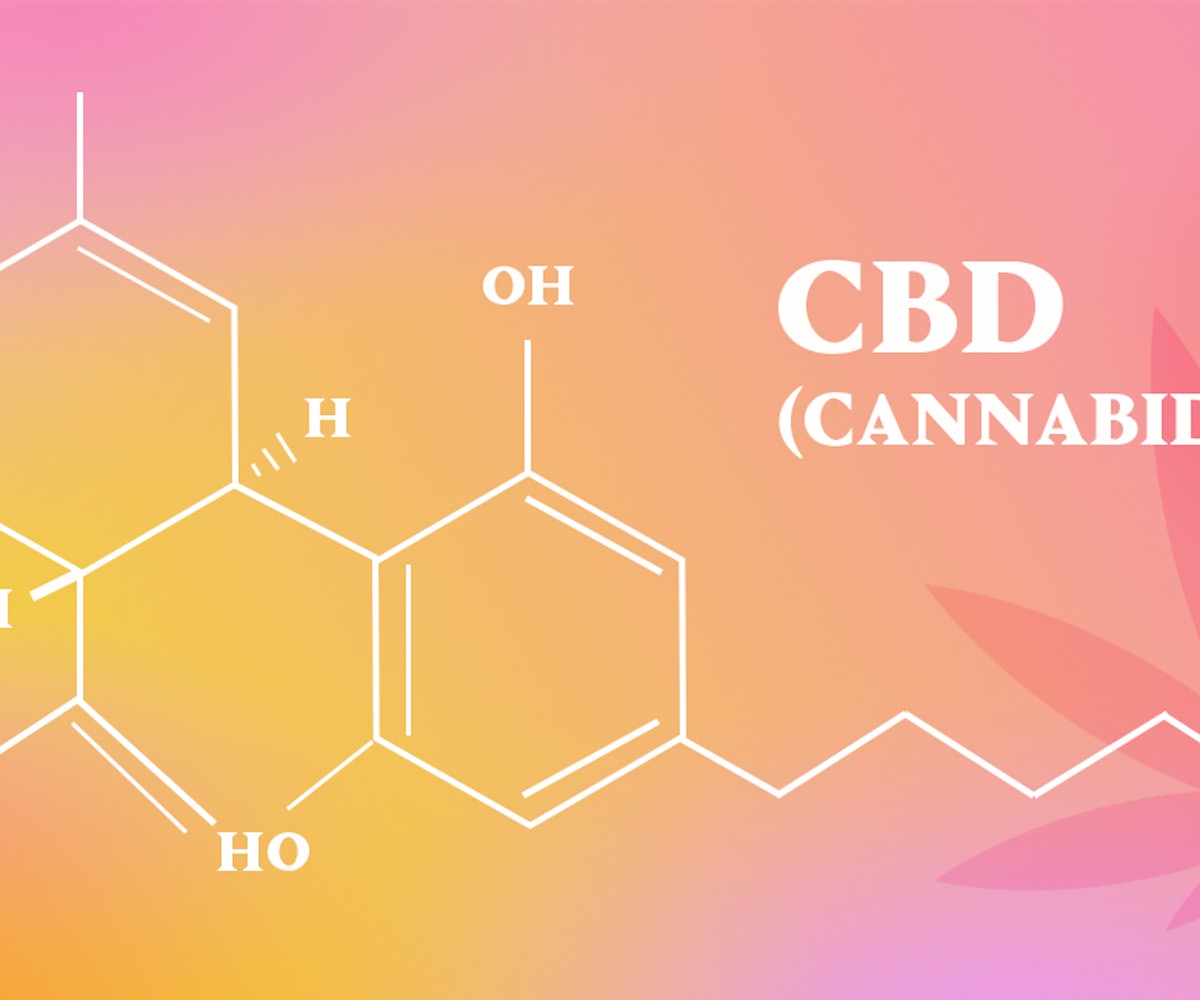 In case you haven’t noticed, CBD is having a moment.

Popping up in health food stores, beauty products, and even your local latte spot, CBD is quickly becoming the latest buzzy wellness trend, joining the ranks of adaptogens like turmeric or reishi mushroom.

However buzzy it may currently be, though, not everyone has a true understanding of what CBD is. Sure, it's known that it’s derived from cannabis plants, but is it anything like marijuana? Are we going to get high?

We had a lot of questions, and with 4/20 right around the corner, we figured why not dive in? We turned to the experts to get the full rundown on CBD and its many benefits.

First of all, what exactly is CBD, and what is it supposed to do? As Sean Akhavan, chief science officer of MedMen, explains, CBD, or cannabidiol, is one of the more well known of about 100 different phytochemicals found in the cannabis plant, known as phytocannabinoids. “It’s associated with some purported therapeutic effects—pain management, anxiety reduction, improved sleep, and decreased inflammation,” he explains. “CBD has been shown to increase levels of anandamide, a neurotransmitter and the main cannabinoid that is produced by the human body, which can reduce pain and inflammation through increased activation of endocannabinoid receptors. Additionally, it also increases levels of adenosine, another neurotransmitter that appears to reduce inflammation.”

In addition to reducing pain and inflammation in the body, it’s also known to have relaxing and anti-anxiety effects. A number of studies have proven that CBD is a promising treatment for many forms of anxiety, such as social anxiety disorder, panic disorder, obsessive-compulsive disorder, generalized anxiety disorder, and post-traumatic stress disorder.

CBD can be found in many forms, but most commonly tinctures to be taken sublingually and in vape form, but you can also smoke it, apply it topically, and even take it in capsule form. Though, in terms of effectiveness, it’s all about absorption. “Absorption, or bioavailability, is key to effectiveness,” says Ashley Grace of The H. Hemp Company. “Many hold the liquid products under their tongue before swallowing to increase absorption rates. Because of this, pills are generally less bioavailable. However, water soluble hemp CBD [such as the kind found in the brand’s Breath Spray] works more quickly in any form.”

And, because many forms of CBD don’t contain any THC, or only contain trace amounts, it won’t get you high.

Cannabis is only legal in a small number of states in the U.S. But is CBD legal? It gets a little tricky, but it all depends where it’s derived from.

As you may know, hemp and cannabis are basically the same plant. While cannabis is, for the most part, not legal in most states (especially for recreational use), hemp, which has no psychoactive qualities as it contains less than .3 percent THC, is legal in all 50 states. CBD can be derived from both plants, but hemp-based CBD is the only one that’s technically legal. Still, its legality can depend on the state you’re in.

“Hemp-based cannabidiol [CBD] is federally legal because of the exemption for hemp-based products from the Controlled Substances Act laid out by the Ninth Circuit’s HIA v. DEA ruling in 2004. Meanwhile, individual states are free to pass their own laws regarding cannabis products including hemp-based CBD; those should, of course, be respected as well,” says Jenelle Kim, founder of JBK Wellness Labs and formulator at HempMeds.

CBD also reaps many skin-care benefits, which is why you’ll notice it’s becoming quite the buzzy beauty ingredient in creams and oils of all sorts. As Kim explains, CBD oil is filled with vitamins A, D, and E and contains high levels of essential fatty acids, which all work to enhance skin health and overall youthfulness. It can soothe, calm, and hydrate the skin while helping to prevent damage, premature and fine lines, and puffy, sagging skin.

Sounds like a miracle skin ingredient, huh? Well, it gets better: It’s also known to be extremely effective in preventing acne breakouts. “A study conducted by the Journal of Investigative Dermatology revealed that the endocannabinoid system [a regulatory system found in our bodies—such as in the brain, organs, connective tissue, and more] is critical to the life cycle of basal cells, which make up around 90 percent of the cells in the skin’s epidermis. CBD can be used to affect the output of oils in the skin. Specifically, CBD inhibits the lipid production in skin cells, making it an effective preventative for acne,” says Kim.

And it’s not just acne. Kimberly Dillon, SVP of marketing at Papa & Barkley, explains that patients who have used CBD have found relief in a number of skin conditions, such as dermatitis, rashes, psoriasis, and hair growth disorders. “Of course, more research is needed, but the early studies are promising,” she says.

Additionally, when applied topically to the skin, it can result in relaxing muscles and joints, Grace explains.

So, are there any side effects of CBD? Well, as we mentioned earlier, it doesn’t have any psychoactive properties, therefore it won’t get you stoned. And, no, you can't OD on it. “CBD and other cannabinoids are known to be non-toxic, with no known fatal overdose levels ever reported,” says Dillon.

As Kim explains, there have been some reports of dry mouth, low blood pressure, and drowsiness. However, a research review investigating CBD side effects and safety found that CBD had no adverse physiological effect on heart rate, glucose levels, red blood cell count, vomiting action, body temperature, exchange of oxygen and carbon dioxide between the lungs and bloodstream and pH levels.

So, thinking of giving CBD a try for yourself? Not all forms or dosages are right for everyone, so you’ll want to start small to find what works best for you. “A consumer should start with the smallest amount possible to gauge their tolerance level,” says Akhavan. “Everyone reacts differently to cannabis and cannabis-infused products based on metabolism, tolerance levels, or even what you ate beforehand. It is best to go slow and try different products and different amounts to see what works best for you.”

As you would with any other product you’re ingesting or putting on your skin, you’ll want to research the product or brand beforehand. “The key is to make sure that you are buying from a reputable provider that is showing that they test their products for both heavy metals and pesticides, and are also showing the user how many milligrams of cannabinoids they are actually consuming. What’s tricky is that a number of brands tell you how many milligrams of hemp you’re getting, which is not the same thing as CBD—which is what you’re paying for!”

And finally, as Akhavan advises, you should always consult a doctor before adding any supplements or medicine to your diet, including cannabis.