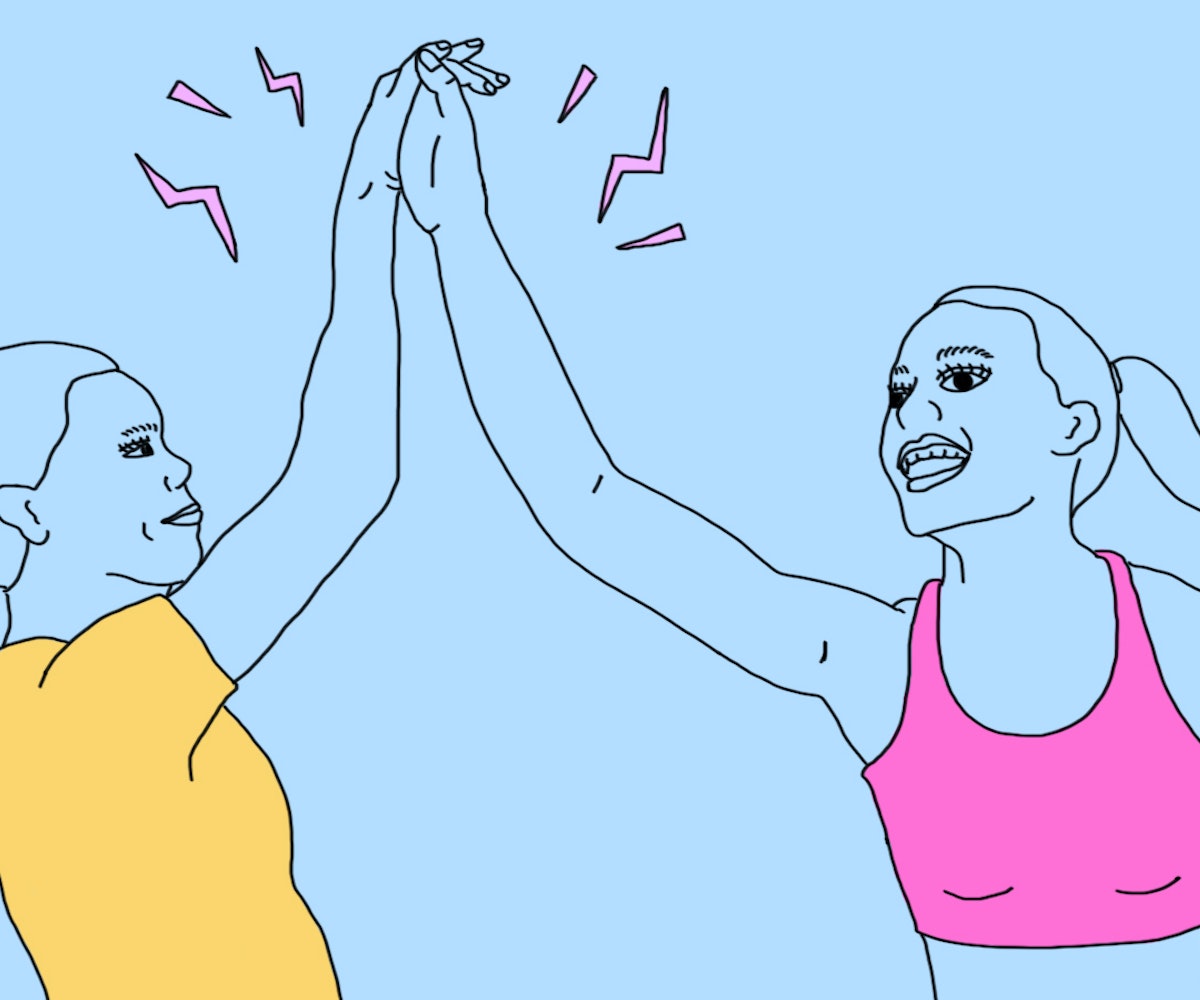 Walking into a CrossFit gym (sorry, a CrossFit “box”) can be super intimidating. You’ve got the clang of weights, grunting of indeterminate origin, and uber-fit, jacked guys sprinting past you, leaving you to catch a whiff of sweat and testosterone in their wake. But that’s not all you find in a CrossFit studio. You also find a community and the tools you need to build a killer body. That jacked guy that just sprinted past you? He’ll shake your hand later and ask you all about yourself (and not even in a creepy way!).

But before you go, there are a few ways to ease yourself into the craziness that is CrossFit.

As Nathan Doud, head coach and owner of Beachside CrossFit in Ventura, California, tells me, not all CrossFit gyms are created equal. Individual gym owners have bought into the franchise, but they can also do what you want with their gym. So when you’re looking for one, do some research. Are there classes at good times for you? Does the gym have an “on-ramp” program for beginners? You can even call and interview coaches since most towns have a few gyms within a 20-mile radius—you might want to know if there are more women in the gym, or if it’s all dudes. Consider spending even a few minutes chatting with a coach to give you a feel for whether or not you’ll get along with him or her in real life. Lastly, look for an instructor that actually asks about you before you get started. Doud says he wants to know a person’s background in sports as well as their current goals, and that’s what you want in a coach.

…Speaking of that on-ramp thing, do it

Good gyms have a series of “on-ramp” or “beginner” classes designed to bring you up to speed. Beginners will eventually move into the normal classes and lift alongside the advanced guys and gals, but the on-ramp classes are important for learning the different movements of which most workouts are comprised. You’ll learn how to properly do squats and snatches, and knowing how to lift correctly will help you avoid injury and progress faster. Plus, while it might seem silly, these on-ramp classes, especially when they’re done in group settings, let you meet some of the other newer people and make friends before you go to the more crowded classes.

Do a bit of research beforehand to familiarize yourself with some of the concepts and vernacular that CrossFit gyms use. For starters, a CrossFit gym is actually called a "box." The term WOD is constantly tossed around, and means Workout of the Day—that’ll be the hard part of the class. Typically, a class starts with an active warm up, some drills and often instruction, potentially a couple heavy lifts, and then the WOD followed by a cool-down. The hour goes by fast. As for snatches, squats, muscle-ups, and thrusters… it’s tempting to look them up online and fake knowledge about how to do each, but you’re actually better off admitting ignorance and getting extra tips from the trainers.

Don’t lift above your weight class

If you’re at all familiar with a gym environment, it’s easy to get swept away in the competitive nature of CrossFit classes, especially when times and reps are getting recorded on a chalkboard at the front of the room.  But don’t let the loud music and the girl next to you lifting three times the weight make you feel like you need to add another plate to your bar. Lift light to start—you’ve got plenty of time to add on more weight in a few weeks, rather than risk injury now.

Unfortunately, CrossFit comes at a cost: some seriously delayed onset muscle soreness (better known as DOMS—another term you’ll hear tossed around in class). So don’t be surprised if getting out of bed the morning after a class makes you whimper a little bit. Try to keep the OTC pain relievers to a minimum and instead, stock up on natural anti-inflammatories like turmeric juice, tea, or powder. A bath in some Epsom salts should also help calm angry muscles. And don’t forget to take plenty of time to stretch and cool down after class, even if you’re finishing long after everyone else has headed home.

Add in some (gentle) cardio

Between classes—and for beginners, this might be a few days, because classes can leave you pretty freaking sore—do some light cardio. If you’re already a runner, keep on logging miles. If you’re new to the whole “athletic” thing altogether, just go for a few longer walks and maybe jump into a gentle yoga class. Keep activities outside of CrossFit low-impact while your muscles adapt.

You don’t have to be Paleo to do CrossFit

CrossFitters can have a bad rep as being overly muscled jocks who eat raw meat on the regular and say things like, “Is this Paleo?” But don’t worry: Not all CrossFitters subscribe to a caveman lifestyle and/or diet. There might be a few that eat more beef than your average American male, but you’ll also find plenty of soccer moms, older guys sporting beer guts, and, lately, younger women with a desire to get ripped and gain confidence. Doud is a Precision Nutrition certified coach, so he’s always up for chatting with clients about their food choices, but it’s not a mandatory part of going to CrossFit classes. If you do seek advice from a coach, make sure he or she has some kind of nutrition certification before religiously following their advice.

It seems hard at first, but know that it gets easier… and that it doesn’t have to be so hard. No one is judging if you can only make five rounds of a workout instead of eight, and no one is thinking less of you for dropping your dumbbell size. Ask your instructor to help you figure out the right loads and weights to lift if you’re not sure—everything is "scaleable," says Doud. That means a pull-up set can involve a band that helps propel you toward the bar, weight can be lowered, and positions can be modified to what works best for you.

You won’t get swole

The misconception that lifting heavy will make you huge has largely been put to rest (it’s about time!), but for those who haven’t heard: Lifting heavy things is not going to make you bulk up to epic proportions. Doud is emphatic on this; he wants to let women know that CrossFit isn’t synonymous with getting super jacked. It’s hard for women to pack on enough muscle to look bulky, he explains. You’re more likely to end up toned and decreasing your body fat percentage while getting stronger, not bigger.

When I hit up Beachside CrossFit for a trial class after interviewing Doud, I was immediately part of the crew despite my extremely introverted nature. The women chatted with me and complained next to me as we all added weight during squats, and we suffered through the WOD—burpees, of course, paired with squats and overhead presses. We had 10 sets of them to do and there were tally marks on the board. Thankfully, when Doud walked away after seven sets, when we hit nine, one of the guys in the class smashed his weights to the floor, declared it was the 10th set and we were done… And we all giggled and sneakily agreed we had definitely done 10. And since the camaraderie came at the expense of skipping a set of burpees, I felt like this was my kind of crew.