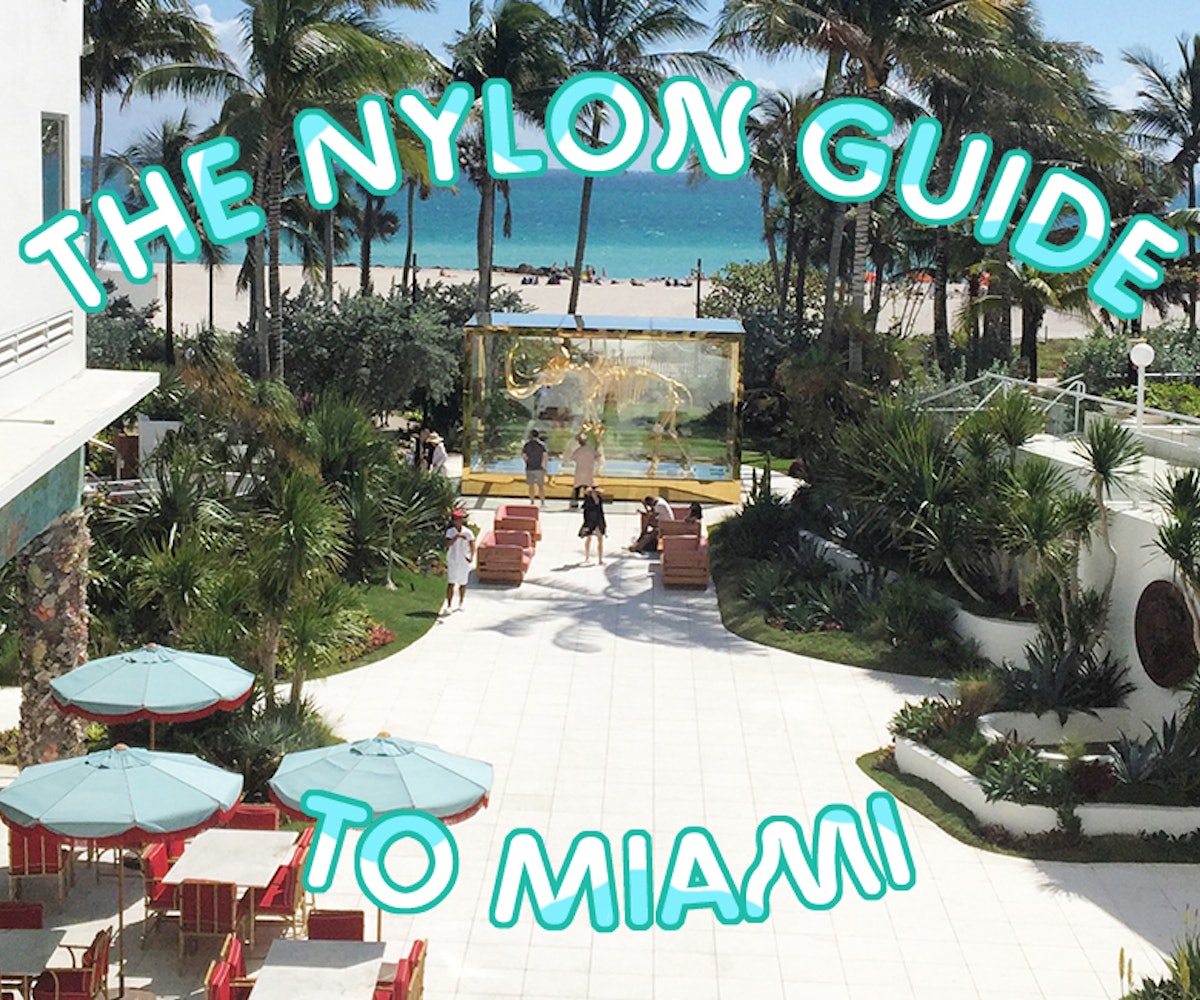 The Magic City has come a long way from its Miami Vice days. Sure, depending on which restaurant’s boat dock you stop at, you’ll likely see some neon muscle tees and ‘90s-style spring break sunglasses. But head inland from South Beach, and you’ll be just as likely to spot street artists and hipsters with sleeve tattoos. There’s a reason the city is sometimes called New York’s sixth borough—today’s Miami is a thriving cultural hub, a foodie’s paradise, a nightlife destination, and a melting pot of cultures. I typically go to Miami once a year and always find something new. You can still party ‘til the break of dawn—just don’t stay in Neverland too long.

The Miami Beach Edition: If there’s one place that exemplifies Miami’s glammed-out identity, this is it. Hospitality legend Ian Schrager masterminded the revamp of a Deco-era hotel, keeping the curvaceous white-and-gold lobby with its huge tiled columns. As at the other Edition Hotels, it’s all about over-the-top amenities, including the sultry Matador Room restaurant by Jean Georges, two pools, a luxurious spa, subterranean nightclub, ice skating rink, and bowling alley.

The Betsy South Beach: Located right in the heart of the Art Deco district, this boutique hotel is a bit of an anomaly. The only structure on Ocean Drive built in the Colonial style, it recently merged with the former Carlton Hotel on Collins Avenue, adding a new wing. It now has 130 rooms in a modern beachy style, two restaurants by acclaimed chef Laurent Tourondel, a library, and a large rooftop pool and spa with views of the beach. Guests can also post up on the beach under the hotel’s signature blue-and-white umbrellas.

1 Hotel South Beach: When the 1 Hotels brand debuted its first property on South Beach, it became the standard bearer for eco-chic accommodations that don’t skimp on style or service. Think: driftwood and a living wall decorating the lobby, organic cotton sheets in the rooms, a tranquil pool deck with cabanas overlooking the ocean, and four restaurants and bars by award-winning chef Tom Colicchio. Sustainability isn’t just a buzzword here—you’ll find recycled glass and filtered water in lieu of bottles.

Plymouth Miami Beach: Located mere blocks from the beach, this cozy boutique hotel provides just the right amount of luxury and intimacy. Lay out by the art deco pool, head over to the exclusive beach area two blocks away, and end your day with a drink at the hotel's bar. Miami done right.

Los Fuegos by Francis Mallmann: If you can’t shell out the $700 room rate to spend a night at the over-the-top Faena Hotel, then dining at Los Fuegos is the next best thing—if only to spend a bit of time in Faena’s fantastical world. Argentine hotelier Alan Faena managed to lure elusive chef Francis Mallmann of Chef’s Table fame to Miami to open a restaurant where open-fire cooking is de rigueur. The four-course Sunday Asado gets great bang for your buck, but to see the place in full swing, come by for dinner when stilettoed glamazons sulk around the lounge and Damien Hirst’s golden wooly mammoth gleams in the moonlight.

Cleo: For a more down-to-earth dinner, stop by this rustic-chic restaurant inside the Redbury Hotel. Chef Danny Elmaleh’s menu of Middle Eastern and Mediterranean mezze is meant for sharing and local ingredients add some Floridian flair.

Blue Ribbon Sushi: Located in the aforementioned Plymouth hotel and run by sushi master Toshu Ueki, Blue Ribbon provides enough sushi and sashimi options for each and every lover of fresh fish. Insider tip: the restaurant's signature fried chicken is also worth an order.

The Broken Shaker: There may be outposts of this award-winning cocktail bar in Chicago and L.A. now, but this one in Miami’s Freehand Hostel was the original, and it’s largely responsible for the city’s cocktail renaissance. What started as a pop-up by bartending gurus Gabe Orta and Elad Zvi became so popular it stayed put, and today it’s a must-stop spot on the city’s nightlife circuit. Less party playground than hip poolside hang, this is a great place to start your night—when you’ll still be able to appreciate quirky, creative cocktails like the blueberry Negroni.

Bodega Taqueria y Tequila: Hidden behind a garage that serves tacos out of an airstream trailer, this speakeasy may have a refined look with wood paneling and Chesterfield banquettes, but the DJ keeps people dancing until the wee hours of the morning. Given its front, it should come as no surprise that this place stocks a wide variety of tequilas and mezcals to keep the party going.

Pérez Art Museum Miami: Opened in 2013, this massive museum dedicated to modern and contemporary art from the Americas, Western Europe, and Africa heralded the city’s cultural renaissance. It’s worth a visit to admire the sleek architecture by Herzog & de Meuron alone; a pavilion with hammock-esque hanging chairs is a tranquil spot for a bit of repose. Currently on view is the first chapter of the three-chapter show, "On the Horizon," which explores Cuban identity with a collection of works by Cuban artists like Yoan Capote, Enrique Martinez Celaya, José Ángel Vincenh Barrera, and Glenda Léon.

Wynwood Walls: In downtown Miami, 20 minutes from South Beach, murals by a who’s who of renowned street artists adorn the walls of former warehouses in a sort of open-air museum. Don’t miss the extremely Instagrammable murals by Brooklyn-based artist Maya Hayuk, Shepherd Fairey, Swoon, Os Gemeos, and Beau Stanton. Despite being in a fenced-in area, the walls are free to visit and the street art extends out to the surrounding shops, cafes, and bars.

Art Deco District: It wouldn’t be a proper trip to the Magic City without at least strolling through the Art Deco District in South Beach. After all, the city is home to the world’s largest concentration of Art Deco buildings. Rows of pastel hotels and restaurants in the distinctive architectural style of the 1930s and ‘40s are a lovely reminder of this coastal city’s history. You might even feel like you’re walking onto the set of The Birdcage starring Nathan Lane and Robin Williams.

Runway Swimwear: Locals swear by this shop for the best bikinis and swimsuits. They carry a selection of hard-to-find international brands, plus you can mix and match tops and bottoms for added variety.

Miami Flea: The most interesting pop-ups are here, at the Miami Flea in the Arts and Entertainment District. You can find cool creations by local artisans, vintage goods, vinyl, and one-of-a-kind gifts. Just check the calendar in advance to confirm the dates.

NEXT UP
Culture
6 Shows To Binge Once You've Finished 'The White Lotus'
Culture
For The Girls Of Forever Magazine, What's Forever Is Friendship
Culture
Who Won At The 2023 Grammys
Culture
The Cutest Couples At The 2023 Grammys
Style + Culture, delivered straight to your inbox.