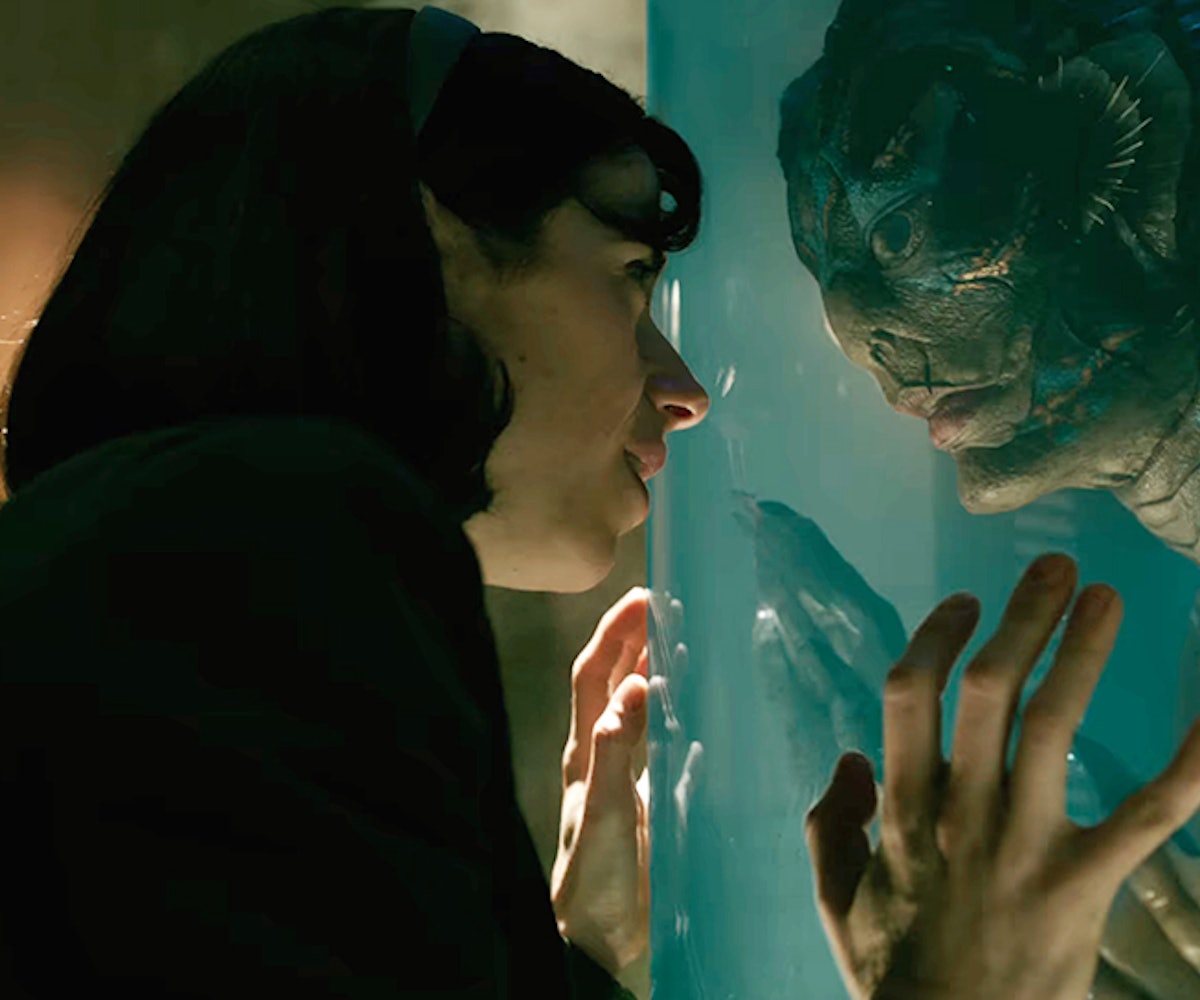 Photo from 'The Shape of Water'

There’s a scene in 2015’s Crimson Peak where the film’s protagonist, Edith Cushing (Mia Wasikowska), is being pursued by her vengeful, murderous sister-in-law, Lucille Sharpe (Jessica Chastain). Bloodied, poisoned, and limping from her seemingly mortal wounds, the sickly young woman presses on through the red-soaked snow outside the movie’s creepy titular mansion, actively seeking out her tormentor. In a moment of strength, wit, and resolve, Edith prevails, reclaiming her power and rescuing her male friend in a way that pointedly flips the script on the traditional damsel-in-distress trope.

In this Victorian era-set Gothic tale, director Guillermo del Toro draws a line between his autonomous heroine and the distressed damsels of classic romance-horror films like Mario Bava’s Black Sunday (1960) and Francis Ford Coppola’s adaptation of Bram Stoker’s Dracula (1992), the very same types of films that inspired Crimson Peak. In those stories, female characters like Barbara Steele’s delicate fainting princess, Katia, and Winona Ryder’s fragile, wistful Mina are reduced to objects of desire for their heroic male counterparts. Capable Edith, however, never wavers or requires gallant rescue during her harrowing ordeal—not when confronted by her father’s corpse, or mangled ghosts, or the twisted revelation of her husband and his sister’s incest.

Instead, Edith is a determined, savvy Mary Shelley-esque novelist, more concerned with sitting in on her father’s business meetings and tapping away on her typewriter—a tool she employs after realizing her manuscripts are getting rejected due to her “feminine” handwriting—than attending to frivolity. Within del Toro’s nearly three decades of filmmaking, the auteur has paid careful attention to crafting interesting, complex, and empowered women characters who defy sexist tropes, like badass warrior Mako from 2013’s Pacific Rim. He’s also subverted the patriarchal paradigm, criticizing toxic masculinity and the model of masculine fascism in films like Pan’s Labyrinth (2006) and The Devil’s Backbone (2001).

In his latest film, 2017’s enchanting romance-fantasy The Shape of Water, del Toro introduces yet another complex, powerful heroine to his lineup of fantastic female characters. Elisa Esposito (Sally Hawkins), a janitor who works the night shift at a government facility run largely by men in suits, challenges all viewer expectations. Mute since childhood, Elisa is the loudest character in the film; an undaunted, curious, compassionate force who rails against both system and law by falling in love with and freeing an intelligent amphibious humanoid (“The Asset”) that’s being held in a secret lab.

Subverting stigmas and taboos about women’s sexual autonomy, within the first five minutes of the film Elisa disrobes and masturbates in her bathtub. The scene is incorporated so naturally that it feels absurd that so many other pearl-clutching filmmakers have shied away from the topic of women’s self-pleasure. While she is technically the “Beauty” in her own Beauty and the Beast story, the average woman can relate to Elisa, who, in her 40s, is no teenage ingenue. That is, of course, not to say she isn’t beautiful or sexual, she simply defies our outdated, narrow cultural standards of what an onscreen romantic female lead is supposed to be or look like. She is “extraordinary and luminous,” the director shares, but, also, “a woman that you could easily find sitting next to you on the bus,” and that’s refreshing.

“I chose to make sure that the audience understands that [Elisa] is not a Disney princess,” del Toro explains. “She makes her breakfast, shines her shoes, and masturbates in the first three minutes of the film. We’re not gonna have some number about purity or hopes. She lives her own complete life, and she is the driving engine of the movie... Most of the crucial decisions are in her hands from the very beginning.”

In stark contrast to Elisa and her self-worth, her misogynistic, protocol-obsessed superior, Colonel Strickland, sees her as beneath him due to both her gender and job and views her disability as a weakness. His archaic beliefs, however, come back to bite him when Elisa and her colleagues—each a marginalized outsider during the Cold War—smuggle the creature away. Naturally, Strickland fails to suspect Elisa could possibly achieve such a feat on his watch, and he is later rendered inept and clueless during a particularly triumphant moment when Elisa curses him out in American Sign Language (ASL).

Of course, The Shape of Water is a fairy tale, but while del Toro’s films blend feminist ideals and concepts with fantastical setups, his heroines are very much grounded in the realities and systemic structures of our very real, very flawed world. In his political ghost story, The Devil’s Backbone, the film’s most compelling character is arguably Carmen (Marisa Paredes), the weathered headmistress of an orphanage located in Civil War-torn Spain. A complicated, tragic figure, Carmen is many things: hardened, heartbroken, sexual, lonely, vulnerable, powerful. She’s also a fighter, much like Mercedes, the housekeeper-turned-revolutionary spy from Pan’s Labyrinth, the woman who triumphs over Captain Vidal, the film’s brutal Fascist villain.

“Mercedes holds [Vidal] in contempt because he cannot see her, because, for him, women are invisible,” del Toro shares. “She’s able to do all this counter-espionage because he doesn’t have her on his radar.” But Mercedes isn’t the only powerful female player in Pan’s Labyrinth: Ofelia, Vidal’s prepubescent stepdaughter and the film’s central character, is the ultimate hero of this fairy tale. Freedom—though tragic in her case—is achieved only after Ofelia obtains agency as a self-realized young woman. She is ultimately freed when she rejects the orders of her patriarchal oppressor (himself a subversion of the wicked stepmother trope), as well as the male faun, who has, through the course of the film, demanded her obedience in exchange for passage through the story’s literal and figurative maze.

Even in 2010’s Gothic horror throwback Don’t Be Afraid of the Dark, which del Toro co-wrote and produced, the film centers on the strength (physical, emotional, and otherwise) and budding friendship between its two female leads: young, perceptive Sally (Bailee Madison) and her father’s intuitive girlfriend, Kim (Katie Holmes). While the film’s male protagonist neglects and brushes aside their fears—a theme that intersects with 2017’s better-late-than-never media revelation about believing and listening to women—the two form a complicated, impenetrable bond amidst the phantasmagoric terrors unfurling around them.

More so than building multiplex relationships between his diverse roster of fictional women, however, there is one steadfast personal rule del Toro enforces across his filmography: “I am interested in making female characters as complex as I can,” he admits. “With Pacific Rim’s Mako, for instance, or with the characters in Crimson Peak, who exhibit many flaws and many traits that can be less than ideal, I tried to give them room to breathe and be as multidimensional as much as I could.”

“I fully embrace feminist values, without claiming the mantle as my own, and I think that it is important, in creating a hero, that you don’t put that hero on a pedestal,” the filmmaker adds. “I think that there are two things that are very destructive in creating a female character: One is making her abide by ideals of purity or beauty the same way that society makes women conform to a certain stereotype [and] the other is to demonize her. Those two extremes... make the air around the character unbreathable.”

While The Shape of Water’s multidimensional Elisa reflects a certain high point for onscreen representation, especially within the fairy tale genre, del Toro’s vow to write interesting, progressive female film characters is nothing new. Even while working on his first movie, 1993’s Cronos, the director was already laying the foundations for wonderfully distinctive heroines.

In Cronos, Aurora, a quiet, unflinching little girl, saves her male protagonist grandfather’s life at more than one point in the film. Whether cleverly storing the vampire in her toy box, to save him from daylight’s fatal glare, or resiliently incapacitating his assailant with a cane, Aurora spends the film making her own decisions, acting upon them for better or worse, and pushing the narrative forward in unexpected ways, similar to Elisa’s interactions within The Shape of Water.

Coincidentally, the parallels are not lost on del Toro. “If you trace the through line from the girl in Cronos—who I think is the strongest character in that movie, and the one with the most unwavering fortitude, faith, and strength—all the way to Sally Hawkins’ character in The Shape of Water, I think there is an important connection there.”

For longtime fans of del Toro, however, that through line represents an ongoing legacy for creating some of the most interesting, complex, and wonderful women on film.