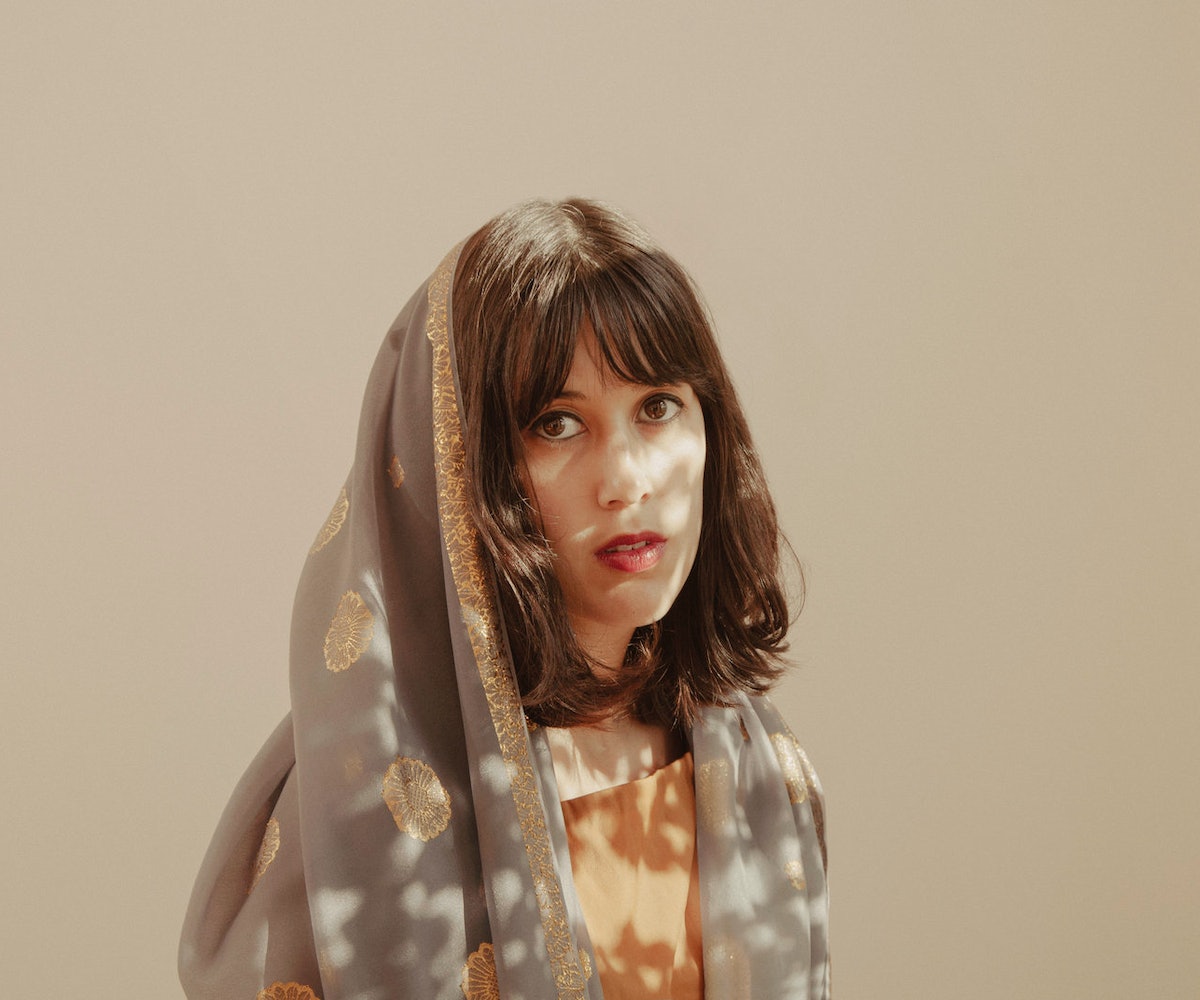 It’s the final day of Sled Island Music Festival, and a man is hovering awkwardly over Nandi Rose Plunkett. He’s only come to offer us a cupcake (which she happily accepts), but the image of a man standing over two women—and all the sinister things it could mean—isn’t lost on Plunkett.

“This man just gave us a cupcake!” she laughs. “That was a really cool thing that just happened. Let’s talk about how the first thing I think when I see a man hovering over two women is that it’s going to be something weird. I need to open my mind up and not immediately revert to those stereotypes.”

Plunkett is big on keeping an open mind. You can hear it in the music she performs as Half Waif and last year’s release, Probable Depths. (The singer-songwriter and her Half Waif bandmates, Zack Levine and Adan Carlo, are also members of rock band Pinegrove.) Her lavish pop compositions, filled with layers of piano, strings, and percussion characters, don’t merely fall in love, heal or die—they trip headfirst through several emotional phases. Music is the place she goes when she’s sad, lonely, or confused. So Plunkett’s narratives are often personal—reminding herself on “Frost Burn” that she wasn’t the cause of her parent’s divorce (“I was 14 when I had to learn what it means to be an adult/ It wasn’t my fault”), falling into obsessive love in “Night Heat” (I'll follow you forever so you'll never go/ Breaking up is out of the question), and wrestling with tiger-like emotions across single “Turn Me Around;” “I’m tired of my own breath,” she moans in an indelible soprano across the percussive track, giving voice to anyone who has spent a bit too long lost in their own thoughts.

But in June, she was given the opportunity to speak for a larger group of women when Esquire ran her essay, “Don’t Call Me the Girl in the Band.” In it, she recounts how she played Pinegrove’s recent Tiny Desk performance for her grandmother, only to find a comment under it singling her—the only woman in the band—out for her beauty and disparaging her musical talent. Obviously, the discovery hurt.

Someone tweeted "Why is the girl in the band? She doesn’t do anything." I’m playing three instruments! I’m doing just as much as my other bandmates. We’re all in rehearsals together. I’m in the band for the same reasons that they are. We love making music, and we have worked at this our whole lives. It felt really unfair to be singled out. To have my physical appearance commented on, and even to say, "The girl has a nice voice but doesn’t do anything.” How are you making that judgment? Why do you feel the need to voice it? They feel blameless saying these things. Maybe this guy doesn’t understand—I want to give him the benefit of the doubt that he didn’t understand the deeper context of what he was saying.

Plunkett’s aware that the “hysterical woman” and “angry feminist” tropes are real, and that some who read her carefully crafted article will focus on the politics and less on the takeaway message—that she really loves music and being a musician. (So much, in fact, that when she became a full-time musician she celebrated by branding herself with a soundwave tattoo that captured her voice saying music in Hindi.) She just wants the same opportunities as everyone else—to perform and share her art with other people. (“What are we doing on this planet if not finding meaning through our interactions with people?” she asks.)

Plunkett sees articles like hers as a small drop in the ocean. Progress has historically been slow. But the musician is optimistic that the tides will change the more the subject is discussed.

“The best outcome of this conversation would be my bandmates and male friends and people in the industry saying, ‘I want to see this,’” she muses. “Maybe I don’t see this because it happens to you or happens when I’m not around. Or I’m just blind to it and don’t understand it. Let me open my eyes and see more of these interactions.”