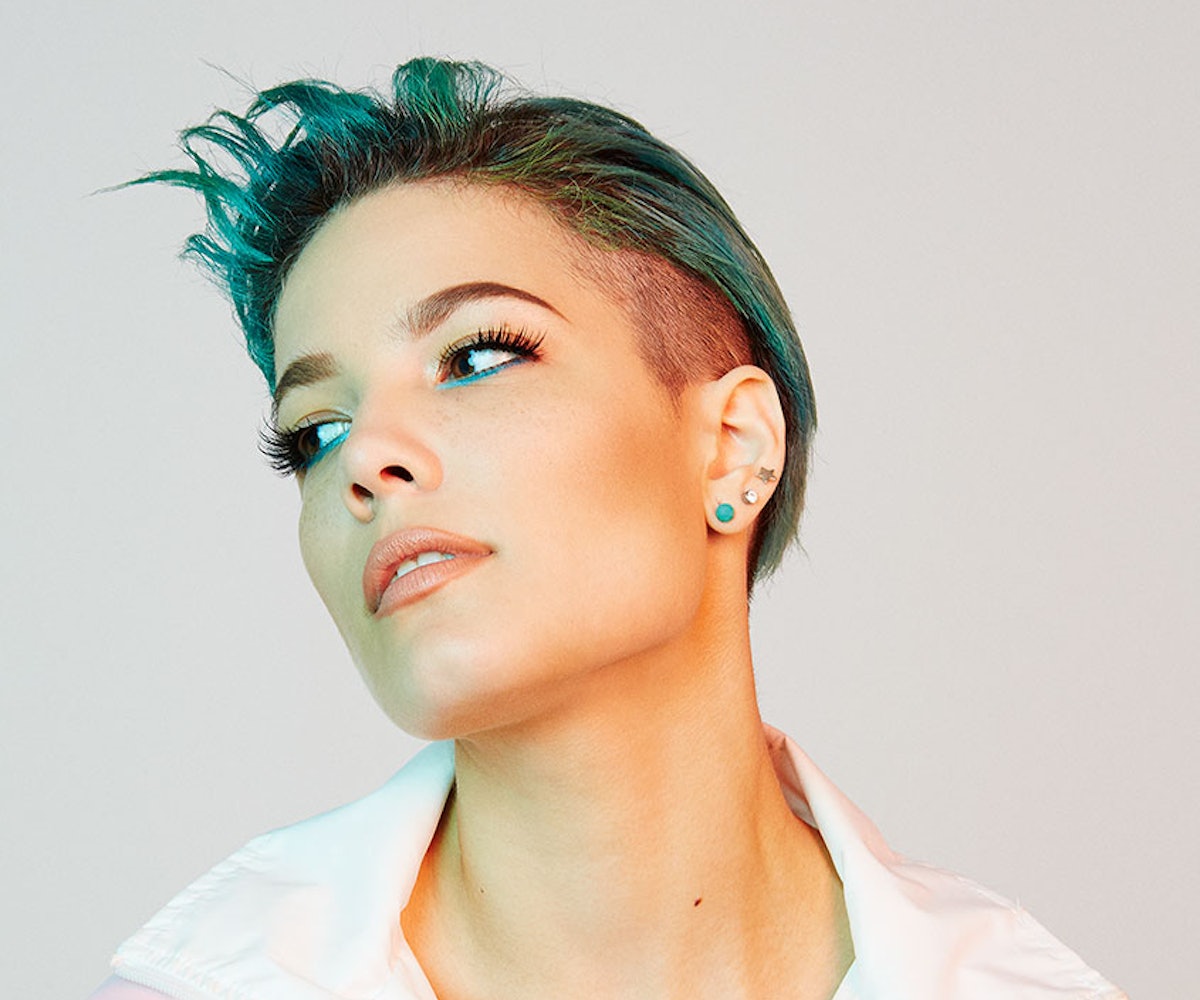 Three years ago, while most of her 17-year-old peers were gearing up for prom and filling out 600-page SAT study guides, Halsey was sneaking out of her Friday Night Lights-style New Jersey suburb to hang out at the Eldert Lofts in Brooklyn’s Bushwick neighborhood. “I was dating this guy and I fell in love with him,” says the turquoise-haired singer-songwriter, née Ashley Frangipane. “And then I found out he was using heroin. I was a normal kid, and it rocked my world and changed everything for me.”

At the lofts, she met artists, holistic healers, and spent an inordinate amount of time “babysitting people who were having ego deaths on LSD,” she says. As Halsey puts it, the lofts were her own little Chelsea Hotel. “I was dealing with real-life shit; my friends were doing drugs and dying. At home, my friends’ moms were leaving $10 bills on the counter so they could go to Starbucks on their way to community college. That wasn’t my life. I crafted my adulthood and nearly skipped my adolescence, in a weird way.”

To cope with these intense experiences, she came up with a persona she called “Halsey”—which is both the name of the subway stop near the lofts and an anagram of her given name. “I needed a thick skin to keep up with everyone,” she says. “I didn’t even know how to open a beer, and I had to be able to tell someone, ‘No, thanks, I don’t shoot up.’ I needed to know how to get around on the subway and how to get into a bar underage.” Before she even started making music, “Halsey” served as a buffer, and not, as many describe the project, as an alter ego.

A few months after embracing this duality, Halsey was diagnosed with bipolar disorder. Suddenly, on top of coming-of-age insecurities came bigger uncertainties: “You wonder things like, ‘Am I ever going to be able to be a mom?’” she says, her voice cracking. “I never wanted to be a cop, but now that’s something I can never be. I can’t carry a weapon.... Knowing that I couldn’t do something because of this, even though it wasn’t directly crippling me, was horrifying.”

For the past several months, Halsey has expressed such consternations through her music. Her debut full- length album, Badlands, is chock-full of booming choruses and synth- skimmed undertones, which will undoubtedly lead many to categorize it as electro-pop, but the feelings evoked give the project a distinct anti-pop feel. The songs explore what happens when you confront—and get caught up in—your darkest thoughts.

What manifested was an obsession with the Badlands themselves, those harsh yet beautiful, almost otherworldly geographic formations found in America’s arid midsection, as well as her own constructed image of a post-apocalyptic society confined by its own fears. “Halfway through writing the record, I realized the whole thing was a metaphor for my mental state,” she says, “for living in this place of gluttony, materialism, and sin—neon lights and fucking revolving doors—being trapped in this mentality.”

Eventually, she decided to explore another mind-set, or, as she poetically puts it, “to venture out into the wasteland—scared, optimistic, and hopeful.” And for the first time in her adult life, she found a positive headspace. Perhaps by convenience, or maybe fate, her realizations surfaced chronologically on the album. The turning point: “Drive,” the fourth track, which Halsey says is the first happy song she has ever written.

But like any 20-year-old, Halsey knows that nothing lasts for long. “My brain feels like a fucking buzzing fluorescent light in a gas station bathroom...all the time,” she says. “I’m sure I’ll be back to the Badlands. Still, this whole journey has taught me that it is possible to leave.”