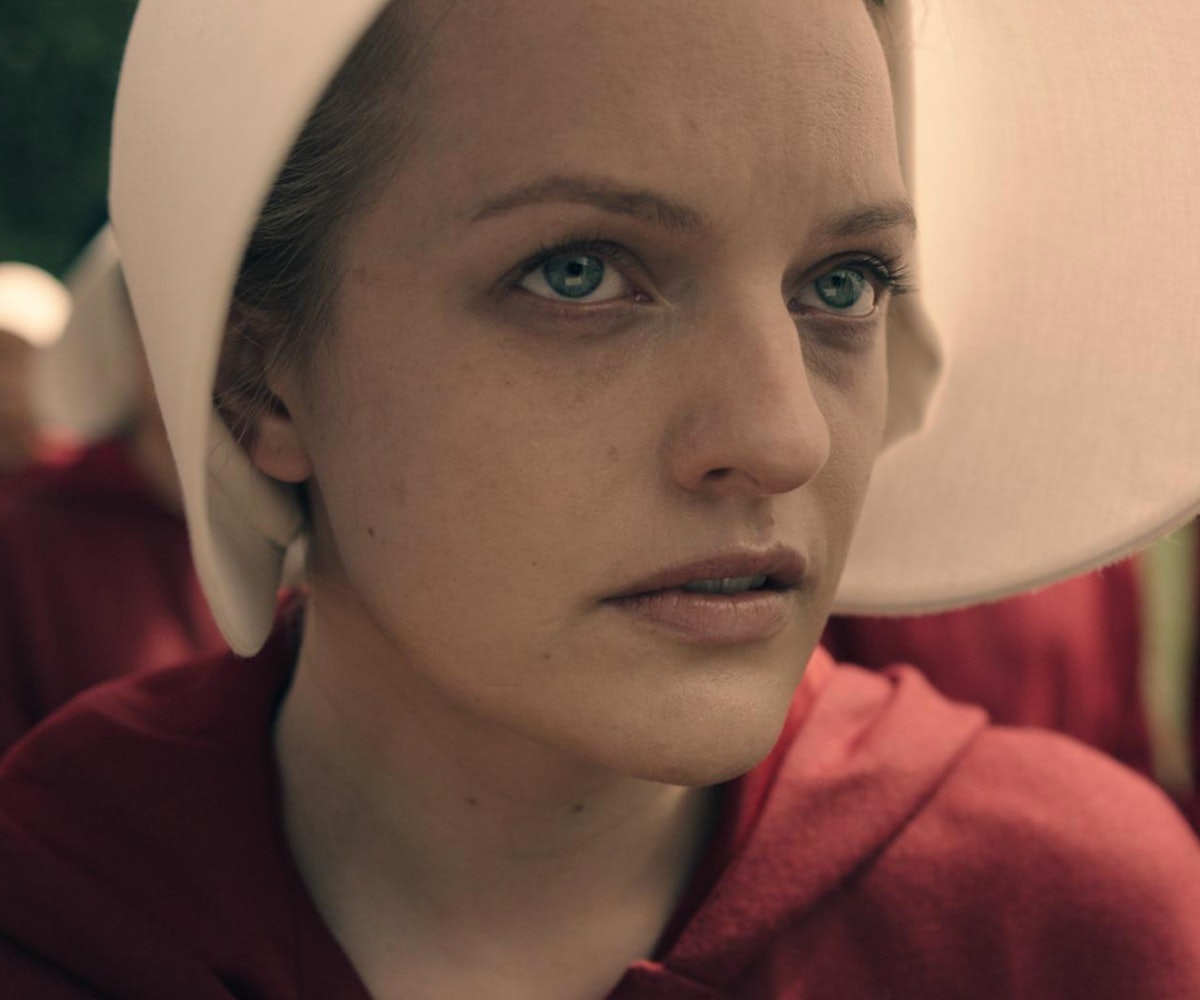 For a story whose premise relies so heavily on stringent categorization, on society's need to put people and places and ideas within recognizable boundaries in order to better understand them, The Handmaid's Tale defies—mocks, even—any attempt to put a tidy label on it. And it is precisely this resistance that makes this work so revolutionary, first in its novel form, and now, in Hulu's stunning, provocative adaptation of Margaret Atwood's source material.

When it was first released, in 1985, The Handmaid's Tale was instantly praised for its dystopian universe, in which America has become Gilead, a country governed by a religious, patriarchal system. The novel was lauded as a revolutionary form of science fiction, a label that has stuck, even though it's one that Atwood rejected, preferring instead to call her work "speculative fiction," because, as she said in an interview with the BBC, sci-fi was little more than "talking squids in outer space," whereas her fictional world was something that could, theoretically, become a reality.

While Atwood is hardly the first artist (in any medium) to attempt to unburden her work of genre specificity, her rejection of labels extends beyond a discomfort with the often (and unfairly) maligned category of "science fiction;" Atwood has frequently refused to call her work—including The Handmaid's Tale, which revolves around the subjugation of the female body in order to perpetuate a fascistic patriarchy—by another highly controversial name: feminist.

Atwood has a long and complicated history of being asked by journalists about the "feminist" agenda behind her work; her stance on the word has evolved from an early disavowal of the term (one made understandable by her unwillingness to claim an intimate knowledge of a political ideology, rather than some sort of rejection of the concept of equal rights) to her recent position, which is an acceptance of feminism as meaning that women's rights are human rights. It's still an altogether too muted endorsement for some people, but, as Atwood recently said in a profile in the New Yorker, she never wanted "to become a megaphone for any one particular set of beliefs."

Of course, Atwood's desire to steer clear of dogmatic pronouncements, no matter how worthy they are, stands in pretty stark contrast to today's embrace of what can best be called performative wokeness, i.e. the need to wear your empowerment on your sleeve—and then walk around saying to everyone, "Hey, look at my sleeve! Did you see my sleeve? Also, here's where I bought this sleeve, and you should buy one, too, because it's empowering." The feminist revolution, in other words, is not just being televised, it's being thoroughly commercialized. And it is via its commercialization that its message has been flattened and perhaps even lost some of its initial meaning, which is, namely, that it is essential not only to look beyond the binary of male versus female, but also to reject reductive philosophies—even those born out of lofty and admirable ideals—and to refuse to put on blinders, so that all you see is your singular goal, rather than the complicated reality that exists just outside of your limited vantage point.

This isn't to say, of course, that the widespread (though, unfortunately, by no means total) acceptance of the term "feminist" by young women today and the demand that equal rights be a collective goal is a bad thing. On the contrary, the normalization of feminism is an important step toward actually achieving anything resembling equality. But the wielding of the term as a weapon is counterintuitive; the insistence that actors, painters, and writers all agree to categorize themselves according to the current definition of feminism is a strange phenomenon; and particularly wrong-headed when it comes to artists. Because the question isn't: Is Margaret Atwood a feminist? It's: Is her work feminist? (The question is also maybe: Why, if you are getting to talk to Margaret Atwood, are you asking her such a simplistic question? Anyway.)

And Atwood's The Handmaid's Tale is a feminist work: It revolves around the subjugation and weaponization of a woman's body. It warns of a society in which women's rights and access to health care are all but eliminated, only doled out on occasion to the few elite. It depicts a world in which the patriarchy is virtually unassailable, where women aren't even allowed to read. Yet despite being decidedly feminist, the novel isn't perfectly so: The patriarchy of Atwood's book is a white one; the narrative mentions the expulsion of blacks and Jews from the country of Gilead, but it's a mere aside, almost more dismissive than if there'd been no explanation. And while there are mentions of gay men and women and their persecution, the story is still centered around the experience of Offred, an educated, white, heterosexual woman, who has been forced to take on the role of a surrogate womb for the sterile wife of a powerful commander of Gilead. And when it comes to feminists themselves? In the novel, Offred's mother is remembered as being the kind of anti-pornography, anti-makeup feminist of the 1970s which Atwood was once so hesitant to identify with; in the novel, it is women like this who implicitly share some of the blame for the anti-pornography, anti-makeup fanaticism of the ultra-religious, patriarchal government in Gilead.

These aspects of The Handmaid's Tale have been amended in the Hulu series, which represents an explicitly intersectional feminism and features a diverse cast of characters, rather than the lily-white roster in Atwood's novel. It also plays around with some of the more reductive dynamics in the novel, like with the character of Serena Joy, who is the wife of Offred's master, and one of the few women to wield any power, however illusory, in the world of Gilead. In the novel, Serena Joy is far older than Offred; her age is simultaneously something that hardens her and makes her an object of pity. In the TV show, Serena is of a similar age to Offred, which makes their power dynamic all the more fraught. Serena was also one of the female architects of Gilead's regime, but she is now a captive in a prison of her own making. (Paging Ivanka Trump.)

These changes in The Handmaid's Tale are not rejections of the source material, nor should they be seen as correctives to its original message. Rather what they prove is the importance of moving beyond the constrictive borders of labels and ideology, because labels fade away and ideologies change. The Handmaid's Tale in itself is a cautionary look at a society which is so in love with its own ability to categorize things as being right and wrong that it loses any ability to accept nuance. It's a supreme irony, then, that one of the primary focal points of critics and reviewers, of both the book and now the TV show, is to try and fit the work into a singular box, as if there were something triumphant about being able to say, "Look at this! It's feminist! This is what feminism is!"

Because, while, undoubtedly, The Handmaid's Tale has a feminist message, by simply repeating over and over again that that is what feminism looks like, we risk not only pigeonholing the art but also limiting what feminism can mean. And as can easily be seen from the way in which both the feminism in The Handmaid's Tale and feminism, in general, have evolved over the last 30 years, our ideologies develop over time, and reducing art to the current philosophies of the time is one way to make art eventually feel irrelevant. And that would be a shame—a real-life example of letting the bastards grind you down.

The Handmaid's Tale begins airing on Hulu on Wednesday, April 26.