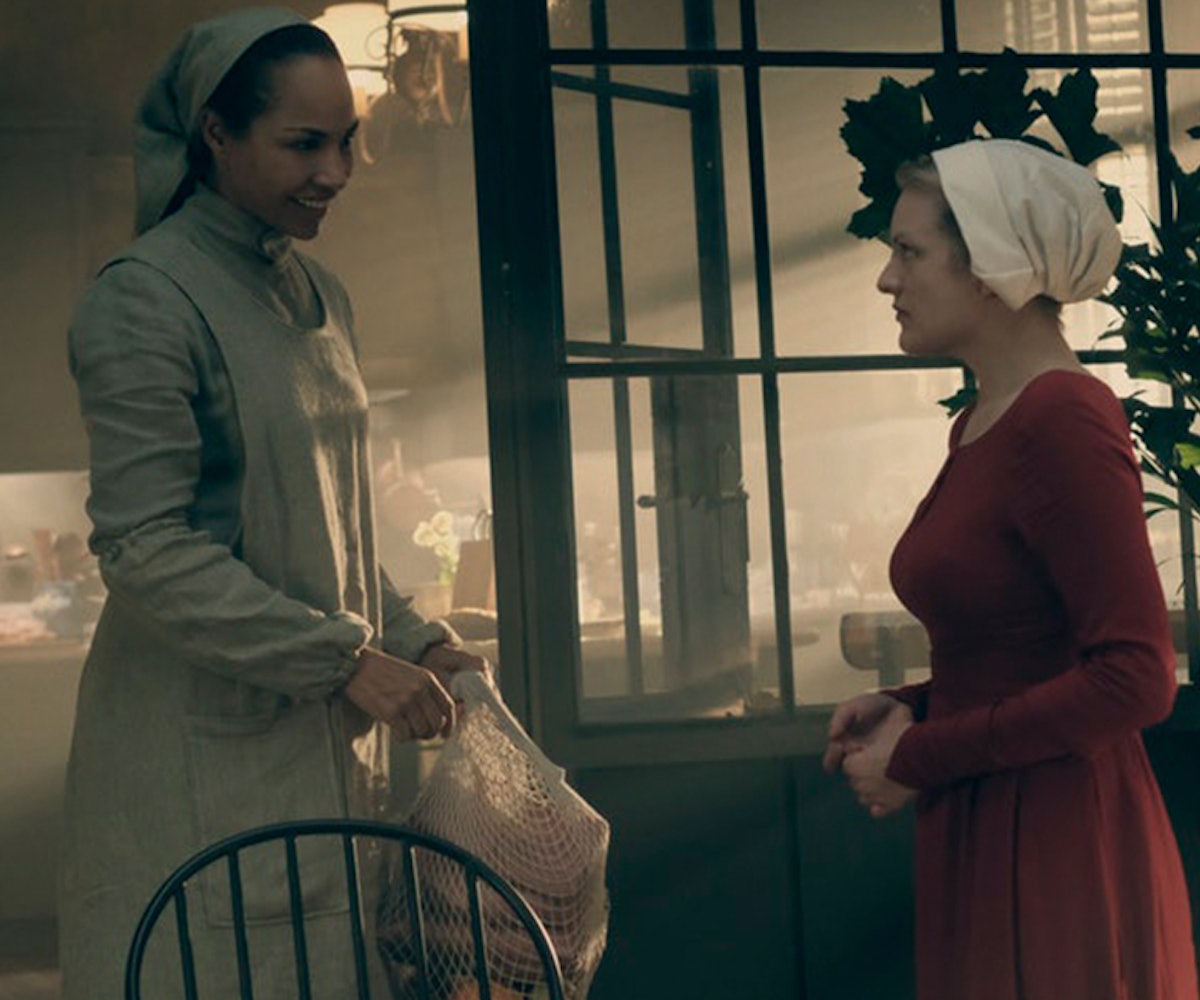 Warning: Spoilers for Season 2 of The Handmaid's Tale, below.

There are many things that are difficult to swallow about Hulu's adaptation of Margaret Atwood's The Handmaid's Tale. While brilliantly acted and meticulously crafted, the show's narrative has so many world-building holes that it can be difficult to get through. Despite assurances by showrunner Bruce Miller that Season 2 would tackle race in a more meaningful way than did the first, its recent conclusion has left that promise unfulfilled. With a hyperfocus on its white protagonist June as she concludes her pregnancy and delivers her child, The Handmaid’s Tale left little room for any explorations of the complication of race. But despite this failure, the show still managed to demonstrate the vast potential it has to open up its narrative to the women on the margins, and its continued use of black women as Marthas is a perfect example of how to plumb the depths of a world filled with terrifying possibilities.

In the Season 2 finale, June is escorted out of Commander Waterford’s home with her newborn baby girl and into the care of various Marthas who are helping her escape Gilead. Risking death, the brave women of what is essentially Gilead’s slave class whisk June outside the city limits and into a waiting van that will take her to safety in Canada. But despite several aborted escape attempts, June turns back when freedom is finally a real possibility. She gives her baby to another escaping Handmaid and turns back to find her firstborn daughter Hannah. Depicted as a triumphant moment of strength, June’s actions were a baffling moment that undid much of the narrative work of the season; an unearned decision that flies in the face of June's stated goals. It was also a selfish choice that spat in the face of the risks the Marthas undertook to save her. That dismissal is made all the more complicated by the fact that the vast majority of the Marthas appear to be black.

Largely on the margins of the main narrative, Marthas have mostly been seen on the margins of the action, usually observing the Wives and Handmaids. Very few of them have lines or names. Instead, their presence often felt like a way to score easy diversity points by casting the roles with non-white women. But a small number of the Marthas have made significant enough appearances that they reveal how many stories are being erased by the show’s stated race-blindness.

Rita, the Martha serving the Waterfords and a sometimes friend to June, is the Martha with whom we are most familiar. In the first season, she tells Serena about her young son who was killed during the coup, but we know very little else about her life before Gilead. Instead, her primary function appears to be to help June navigate life in the household, reassure her and assuage her fears. She takes possession of the letters from Gilead when June is taken away in the first episode of the second season and promises to look after June’s child as her godmother when she is gone. She is also the one who helps June make her escape in the season finale. Over the two seasons, Rita is shown to be warm, perceptive, and kind. She is the rock of the household, allowing June to fall apart. But there is very little concern for her feelings, her worries and anxieties, or her desire for a life outside Gilead. Her participation in MayDay and her role in June’s escape demonstrates that, in addition to everything else, she is also a radical bent on undermining Gilead’s oppressive patriarchal state. She is a woman of great depth whose multitudes are being pushed aside in favor of despair porn about the futility of June’s escape.

In the eighth episode, we’re introduced to Dr. Hodgson, a black Martha who was one of the top neonatologists in the world prior to her enslavement in Gilead. Brought in by Serena to give her medical opinion on an ailing baby, we see her don her white coat for the first time since Gilead’s takeover, in a scene imbued with deep meaning. Dr. Hodgson quietly sobs while the male doctor supervising the case mentions his admiration of her previous career. Clearly her junior, this man is free to practice his trade while she has been relegated to housework. Even before the rise of Gilead, it would not have been easy in America to be a dark-skinned black woman in medicine and make it to the top of her field while also dealing with the racism and casual misogyny black women face. It’s a profound moment, but also one that passes quickly and isn't referenced again, giving it far less weight than the trauma suffered by June and other white Handmaids.

The season’s tenth episode also hints at the inner life of a black Martha. Credited as “Martha Frances,” the woman who brings June’s daughter Hannah to the abandoned house to see June is shown to have a tender and trusting relationship with the child in her care. Initially afraid of the mother she hasn’t seen since their attempted escape to Canada, Hannah hides behind Frances’ robes in a gesture of safety. June asks after her daughter and dotes on her, and it is Frances who is able to fill her in on the life Hannah has been living. When they are again separated, Frances promises June that she will love and protect Hannah in June’s absence. What must it feel like to be tasked with the care of a small black girl in a society that hates women? What obligation did Frances feel to protect her and shield her from the inevitability of her oppression as a young black woman? How did Frances navigate being made the caretaker of a small child she didn’t know? These are reasonable questions that the show has rendered itself incapable of addressing by excluding race from the narrative.

The Marthas' elaborate escape plan should not have come as a surprise. As the women in the wings, they are seen and not heard; they are uniquely positioned to absorb critical information about how Gilead functions and figure out how to overthrow its leaders. A clear reference to the house slaves working in the “Big House” during slavery, these women are tasked with the unending labor of catering to the mostly white Wives by cooking their food, minding their children, and being their maids. That they have formed a vast network of resistance should be foregone conclusion; that those in power are too blind to see what is happening in their own homes is a testament to the oblivious weakness of the corrupt. Black women have long been considered the Cassandras of social justice; a recognition of this racial disparity would make their mobilization against an encroaching oppressive state an inevitability rather than a surprise. Because the Marthas spend most of their time quietly serving the Commanders and their Wives, it’s easy to forget that like the Handmaids, they are equally enslaved by the Gilead regime and stripped of their lives, their past, and their agency. They have just as much incentive as the Handmaids to resist the world that has been forced upon them. But more time in the show has been spent trying to redeem Serena, despite her culpability in upholding Gilead’s oppressive structure, than acknowledging that there are countless women suffering because of Serena's—and countless other women's—actions. The show has unintentionally hinted at rich histories for these women and owes it to the story they are telling to explore them.

Having moved past its initial source material, Hulu’s The Handmaid’s Tale has a unique opportunity to make itself even more relevant to the current times by course-correcting on the ideological missteps of the novel. Widening the show’s perspective to include black and brown women in a meaningful way would create new story possibilities and validate the ways race can complicate the oppression that women face under patriarchy. The show’s continued insistence on race-blindness has hobbled its ability to tell nuanced stories about the very women whose experiences were mined to created the abuses of Gilead, even as the showrunners have promised to do just that. But it seems we'll have to wait until Season 3 to see if any of that will change.