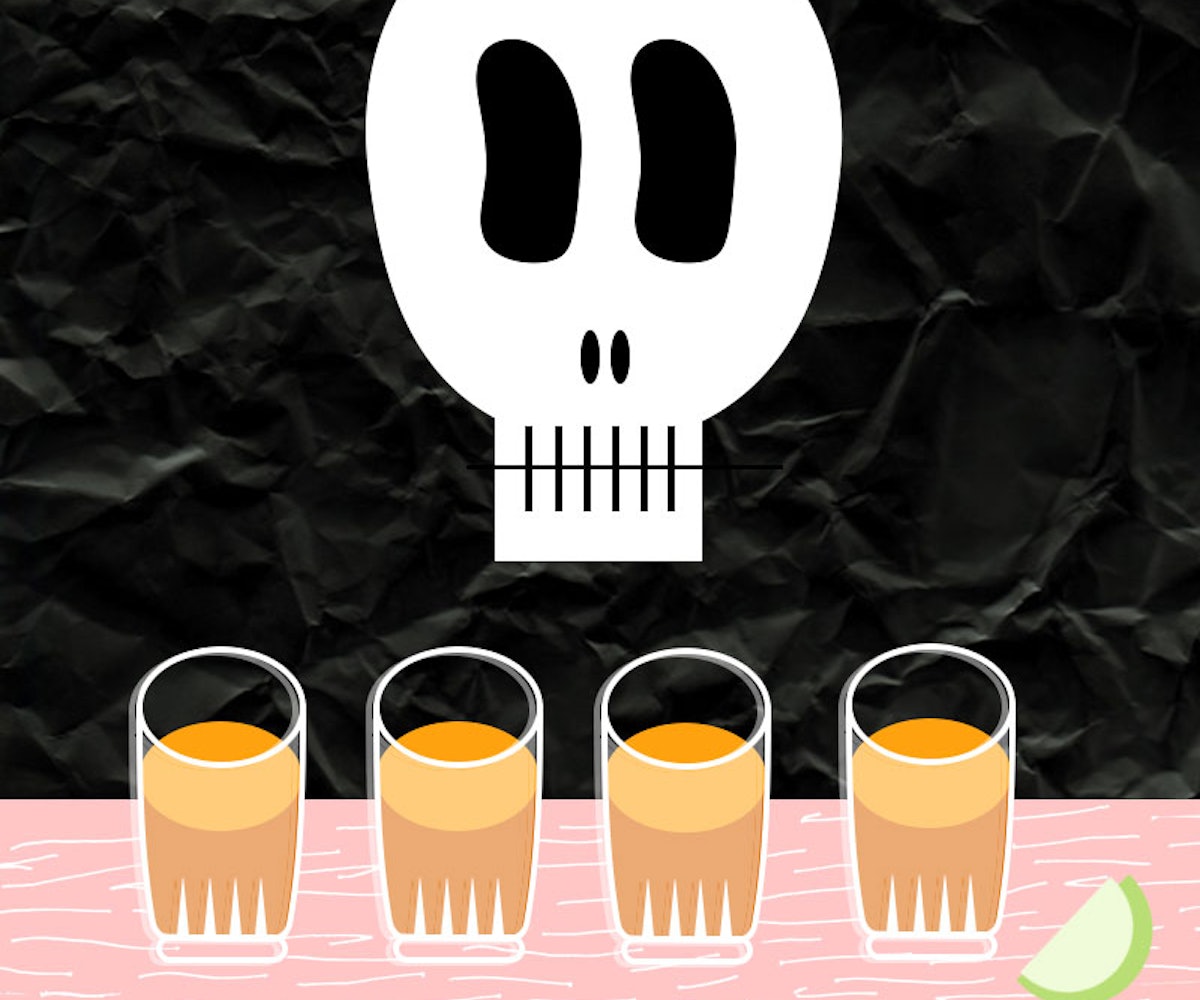 Hangovers. If you're one of the more than two thirds of drinkers who've had one, you know the feeling: the searing headache, the nausea, the malaise—barf. One would imagine—or, on those hungover days, pray—that, after all these years, science could have devised a cure. Turns out it's not so simple.

The problem with hangovers is that researchers haven't definitively determined what causes them. While in the past, dehydration was deemed by many to be the main culprit behind those hazy mornings-after, that's just a small piece of the puzzle as experts continue to study the phenomenon. Mayo Clinic, for one, says alcohol's effect on your blood sugar, vessels, stomach lining, and inflammatory responses may all be contributors to your hangover. Others, according to Adam Rogers at Wired, say the key to unlocking how alcohol affects our bodies might actually be a neurotransmitter.

Adding to the confusion is that a hangover is largely subjective, not only in definition but in effect: While I (a former career bartender) may be able to go several rounds of cocktails and beers, followed by shots, and feel right as rain in the morning, my drinking buddy who's gone toe-to-toe with me might wake up still worse for wear. A night of tequila shots leads to my swift downfall, while a friend can practically pirouette out of bed the following day.

So, while the art of hangover avoidance may be an imperfect one—truly, the only reliable way to prevent one is to nix the hooch altogether—there is one group that seems well on its way to cracking the code: bartenders. Ahead, we've gleaned their tips and tricks for avoiding those next-day spins, migraines, and aches and pains.

Hydrate, hydrate, and hydrate some more. (And then maybe take an aspirin.)

Take a seat at any good cocktail bar, and the first thing they'll set in front of you is a glass of water. It's not just hospitality—it's necessary. Even though science hasn't pinpointed dehydration as the only cause of your hangover, there's no denying that alcohol is a diuretic. Meaning: It makes you pee, so replenishing fluids throughout your night is key for avoiding any Saharan morning-mouth situations. Beyond that, bar-industry pros say it's a good idea to cap off your bedtime routine with another pint of water as well as an aspirin or Ibuprofen for good measure. Which makes sense: Since hangovers may be a reaction to the body's inflammatory response, an anti-inflammatory could go a long way toward staving off—or at least lessening the effects of—that hangover.

Conventional wisdom has long said that drinking on an empty stomach is a bad idea—and it is—though that won't necessarily affect your hangover (some claim eating greasy foods will prevent them, however). Food instead comes into play the next morning: Bar pros say having a morning nosh seems to at least lessen the severity of hangover symptoms, as a snack may replenish your body's lost electrolytes—important if you got a little, er, sick the night before. So, wake up, have a piece of toast and some fruit, and then maybe go back to bed.

Low-alcohol beverages may not scare a hangover away—especially if you've had ten of them—but opting for drinks with a lower alcohol by volume (ABV) will keep you from getting drunk faster than if you've had, say, gin-and-tonics all night. Words like "session" will indicate if a cocktail or beer has a lower alcohol content, and spirits like sherries, ports, or aperitif wines like Lillet have a lower ABV (around 15 to 20 percent—still higher than most wines) than those of traditional liquors (around 40 percent). When it comes to beer, the word imperial means your brew has an ABV ranging from 8 to 12 percent, which is high when you're potentially getting 16 ounces of that liquid. As for booze, keep an eye out for cask-strength, navy-strength, or overproof spirits—they're delicious but have exceptionally high ABVs.

This tip admittedly doesn't come from industry pros, but we'd be remiss not to mention what has become the newest reported hangover-prevention tactic: Asian pear juice. According to researchers at CSIRO, certain properties of the Korean pear may interfere with alcohol absorption and also offer anti-inflammatory properties for individuals who drink the juice before a night of boozing—a double win.

We may roll our eyes at the friend who insists on getting top-shelf gin in her Negroni, but she might be on to something: Some claim that certain higher-quality spirits could be the secret to keeping hangovers at bay. The reason might have to do with distillation: During this process, impurities, called congeners, are stripped from the liquid, though not all are removed—which is why many high-end brands will distill their product repeatedly. This process, of course, takes time and money, so lower-end brands might distill only a few times, leaving behind more congeners, which some scientists say affect the severity of our hangovers. Fan of dark spirits? Sorry, whiskey, brandy, and aged-rum fans, but some studies, noting that brown liquids typically contain higher levels of congeners for desired flavor, indicate that dark hooch may also cause more intense hangovers than their clear shelf-mates. That's not to say you have to cut them out completely: Have your Old Fashioned or Manhattan, then throw a whiskey-seltzer into your libation lineup for added hydration. And the same for you, winos—sort of. The study also notes that red wines (also higher in congeners) specifically produced stronger hangover symptoms. Opt for—gasp!—a glass of white every now and then.

Just say no to sugar—or at least have it only in moderation. While it seems the dehydration factor might be the reason to stray from sweet, the interaction between ethanol and glucose can raise the levels of lactate in your system, according to Wired, which studies have found makes hangovers worse. So maybe don't have that third piña colada.