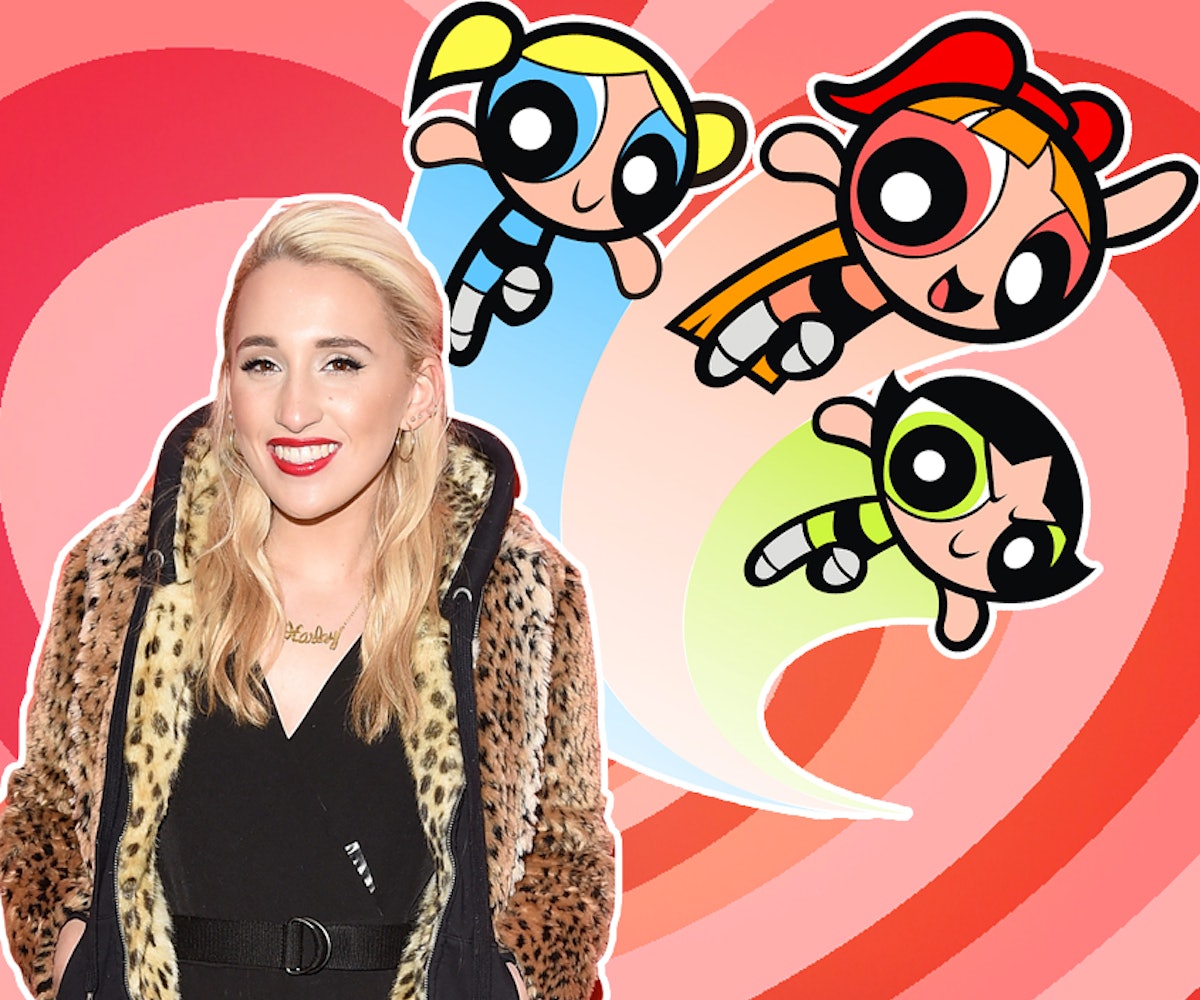 Growing up, The Powerpuff Girls was one of my favorite "vices." No matter how many times my mother implored me to peel myself away from the television, there was no argument that could keep me from watching the wonderful magical beings that were Blossom, Bubbles, and Buttercup kick ass and save Townsville from all of its maniacal enemies. Looking back, the show didn't, as I was told it would, "rot my brain." Rather, it taught me to be secure in myself and stand up for what I believed in. As was probably the case with most young girls, they were some of the first female role models.

When I heard that budding actress and all-in-all badass Harley Quinn Smith also felt the same way about the show, and had some theories about it, I knew I had to call her up. Here, Smith talks The Powerpuff Girls, and the impact it had on her.

I heard you have an interesting theory about The Powerpuff Girls and how it pertains to different people. Can you tell me about it?

Well, basically, I love The Powerpuff Girls, and I’ve always thought that they represented such unique and individual personalities. From the exterior, it seems that they’re just these innocent little girls, but underneath, there’s so much more. So whenever I meet people in real life, and get to talking with them and get to know them, I gauge them on a scale: Are you giving off more of a sweet and sensitive vibe like Bubbles (who I love the most), are you kind of edgy like Buttercup, or are you just a very charismatic individual like Blossom? I’ve come to find that a lot of people actually fit into one of the three options. It seems a little weird to think that everyone—boys and girls—could fall into one of the three, but it’s very true. I find that a lot of the time, I can match a person I meet to a Powerpuff Girl.

What I love about The Powerpuff Girls, too, is that, like you said, it's three really young girls just kind of doing their thing and they put on this facade where they don’t want you to know how kick-ass they are. It’s this whole internalized notion of being secure and confident in yourself without having to outwardly show it.

Exactly! I’ve always been so enamored with them because I felt that they were just so relatable. And I feel like the message of the show is so much more than. Professor Utonium intended to create these three perfect little girls made out of sugar, spice, and everything nice, but when he mixed in chemical X, it gave the girls these superpowers. It parallels how society is trying to change and manipulate girls into acting some sort of way or fitting into one persona. And the whole message of the show is that there just really isn’t one. Chemical X gave the Powerpuff Girls these insane abilities; to me, that’s representative of everyone’s individuality and uniqueness. For that reason, I’ve always looked up to the Powerpuff Girls because they solidify the fact that you don’t have to conform to what society wants you to be. You can be whoever you want to be and still kick ass.

When did you first start watching the show?

Honestly, I can’t remember I time when I didn’t watch it. I feel like that is the show that has had the biggest impact on my life throughout my childhood. I had posters all over my walls and dressed up as them for Halloween. They just put it on Netflix, so I watch that all the time now. With the new reboot coming out, all of the clips look so good and I already know I'm going to watch it all of the time. No matter how old you are, it's always relatable and it's always so good.

That would be so dope if it was a real-life version. I relate to Bubbles more than I do to most people I meet in real life. She’s super-sweet and sensitive and she loves animals, and I love animals so much. But underneath that, when you piss her off, she’s not afraid to go all out on you and make you face some consequences. I view that as a super-valuable lesson. I feel like, for the other two, it should be someone that you wouldn’t expect. I think Kiernan Shipka would be a good Blossom because she’s awesome. For Buttercup, Zendaya would be great. I love both of them.

What’s the biggest lesson that you’ve learned from the show?

I’m a huge believer of standing up for yourself in a non-aggressive way. I don’t believe in fighting fire with fire, but I do believe that if someone is harassing you or bullying you, you should always utilize your voice. You shouldn’t let anybody get you down continuously without saying something. Although humans don’t necessarily have the superpowers and abilities that the girls have, we do have the power of our voice, which is also extremely powerful.

Is there another cartoon that you've recently seen that's affected you?

I saw Zootopia, and at first, I went to see it because I was so pumped to see a movie about a world in which only animals exist, but as the movie progressed, my friend and I kept seeing all these parallels to racial, gender, and equality issues. By the time the movie was done, we were left speechless because they did it so beautifully. There are a lot of points to it, but one of the biggest points is that there’s a gray bunny that wants to be a police officer, but everybody says that she can't be one because she’s a bunny and very innocent-looking and unintimidating, but she goes on and becomes one. My friend and I, who are both 16, were just crying in the theater. That was just really special to watch because a lot of things in entertainment today and movies and TV don’t necessarily represent females in a very empowering and positive way. Even though we’ve progressed so much, it still seems that a lot of films are not representing females in a good way.