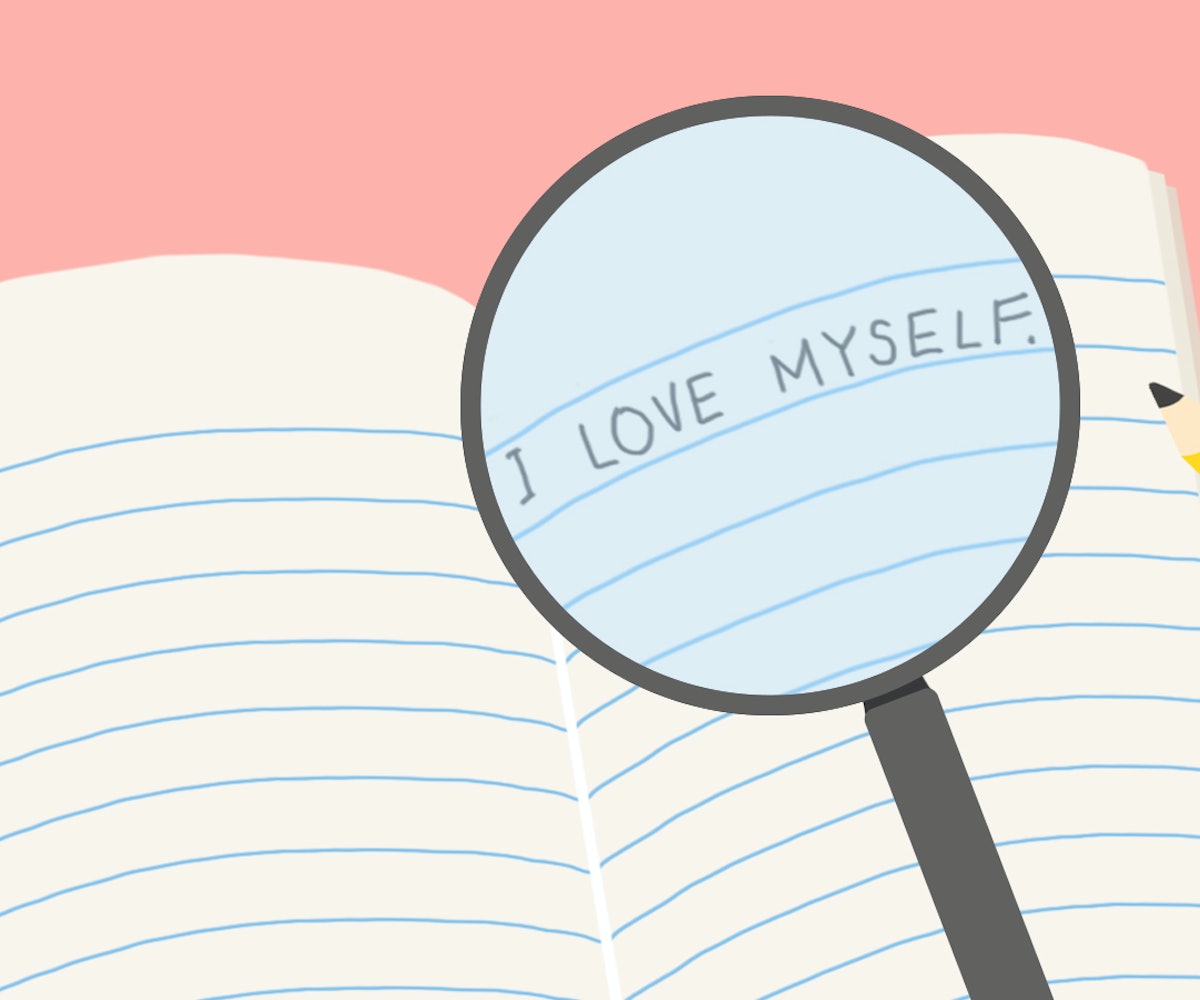 There is a hazy memory I’ve held onto which I know, having had some distance from it now, must be an amalgam of similar moments, distorted by my returning to them. Still, it remains. I’m sitting in the back seat of my family’s station wagon, parked right in front of the grocery store, while my mom has run in to grab some things. I am young, probably around eight—don’t worry, this happened a lot in the '90s—and I’m watching a woman transferring bags of groceries from her cart to her car, which is parked next to us. In the back seat of the car is a little boy, staring down at his lap. I am bored and restless and indignant, like I always am when dragged along on errands with my mom, and I wonder if that boy is, too. And I’m struck by a realization: Every one of the cars in that lot belongs to a person, who belongs to a family, which exists outside this brief moment of my observation and contains all sorts of drama I will never know. Suddenly I’m overwhelmed by the fact of millions of stories brushing past me every day; the only way to hedge the anxiety this breeds in me is to vow that I will do my best to learn them all.

For a child who prefers watching over doing, whose ideal version of participation is observation, few role models exist. Ours can be a quiet, necessarily solitary kind of existence, not exactly fodder for the most exciting movies, books, or television. That was the realm of kids like the Pevensie siblings, fighting valiantly in The Chronicles of Narnia; the neighborhood gang causing trouble on Hey, Arnold; the real-kid competitors on GUTS. I wasn’t athletic or especially brave; the idea of being in a spotlight made me sweat. In 1995, I found someone who finally made sense to me: Harriet M. Welsch.

For those unfamiliar, Harriet M. Welsch is the hero of Harriet the Spy, whom I met first through the Nickelodeon movie and then through Louise Fitzhugh’s 1964 novel, on which the movie was loyally based. Harriet is 11 years old, an aspiring writer, and a diligent spy. Her subjects are wide-ranging—neighbors, parents, classmates, friends—and she watches them quietly, tracking her observations in her beloved notebook. She is self-assured, independent, and endlessly curious. And, of course, this gets her into trouble, when her classmates discover and read her notebook (despite the big and bold “PRIVATE” on its cover) and shun her not only for what she’s written about them but also for living a life they find unusual. For the latter, she is unapologetic. She has one mission, to which she is resolutely dedicated: “I learn everything I can,” she says, “and I write down everything I see.”

When I was nine years old, this seemed like a goal I could really get behind. I’d already been keeping journals, but I liked the idea of using the space to explore the world around me. Details, like the weather on the day I fought with my best friend or the brand of candy I decided was a new favorite, seemed meaningful but delicate; writing them down was a way of guaranteeing their survival.

On my next door neighbors: “Tim and Dave put their underwear on the clothesline and leave them out for TWO WEEKS. Dave has a stupid hat. Tim always says, ‘Hi neighbor!’”

On my guinea pig: “Noel is her name. She has a pink ear and a brown one. She is Dark Brown, Light Brown, and White. She squeks [sic] very loudly and is very cute.”

On my classmates: “The nicest boy is Michael. He has curly brown hair. By accident I whacked him in the face in gym, but he didn’t mind. I used to like-like him but not anymore.”

Reading those entries now is almost unbearably boring, but I’m grateful for them. Mine was a surface level sort of archiving, misunderstanding the distinction between recording and learning, remembering and understanding, but it served the same purpose as Harriet’s. In the novel, when her notebook is taken away, she realizes how much she needs it—and not just for spying. Without a notebook, “it was hard for her to think. The thoughts came slowly, as though they had to squeeze through a tiny door to get to her, whereas when she wrote, they flowed out faster than she could put them down.” My notebook gave, and gives, me space to process the world, which, in turn, allows me to exist within it.

Which is to say the significance of keeping a notebook might be more in the practice than in the entries themselves. Writing requires aloneness, both in the moments of actually sitting in front of a laptop (or, in Harriet’s case, putting pencil to notebook) and in gathering intel. The aloneness doesn’t have to be literal—Harriet often writes while others are around, and her spy time relies on present subjects—but it needs a level of remove, an ability to cordon off some brain space when everything else is asking for attention. To some, this might seem like a barrier to truly living, as it does to Harriet’s father when he tells her, “You’re going to find that sometimes just experiencing things can be enough.” But young Harriet is unmoved, insisting, “That’s how I experience things. With my notebook.”

Certainly, Harriet invigorated my desire to be a writer, but she also normalized my desire to be alone, to observe, to remember. Though this is a story about her being judged, and even punished, for writing, it’s always clear it is the other characters condemning her and not Fitzhugh. That Harriet is treated gently by Fitzhugh and, within the text and film, by her nanny Ole Golly, delivers a clear message: Living like Harriet isn’t bad, it just might have bad consequences. It isn’t easy to prioritize oneself, but it is important—especially for a writer. Harriet isn’t a loner, but she does cherish time spent alone. She prioritizes it with a discipline I’ve not yet mastered. When Harriet’s best friends ask her to come along to play with them after school, her answer is simple: “Sorry. Spy time.” And her friends are disappointed but unsurprised. This is a boundary Harriet has drawn again and again. It is one I struggle with, still.

It might sound hyperbolic to say this fictional 11-year-old gave me permission to cultivate the aspects of my personality that would turn me into not just a writer but a good writer, but the values I still see in Harriet the Spy have been echoed in the reading I’ve done throughout my life. An especially resonant idea is that of the importance of maintaining close correspondence with oneself, put forth as well in Joan Didion’s, “On Keeping a Notebook.” And though I’m sure Didion didn’t expect to be compared to Harriet M. Welsch, bear with me while I do just that.

In writing about the notes Didion has kept throughout her life—those observations on strangers and friends—she says that, while writing, she “imagine[s] the notebook is about other people.” But she knows she is wrong. “Of course it is not,” she continues. “I have no real business with what one stranger said to another at the hat-check counter in Pavillon [...] nor is my concern with a woman in a dirty crepe-de-Chine wrapper in a Wilmington bar. My stake is always, of course, in the unmentioned girl in the plaid silk dress. Remember what it was to be me: that is always the point.”

Didion—like Harriet (and, I’d bet, Fitzhugh), like me, like all notebook-keepers—understands that any attempts at knowing the world are masked attempts at knowing oneself. Harriet’s notebook is the physical manifestation of her relationship with herself; it is the venue of her self-education and growth. When she is abandoned by her classmates and friends, betrayed by her parents, she says, “I will always have my notebook,” but what she means is, “I will always have myself.”

And she does. We see it when she walks through the front doors of her school, her head held high despite jeers. We see it in her stubborn refusal to abandon the pursuits others found unusual. We see it most explicitly in the book, when she consoles herself after a bad day by opening up her notebook and writing, “I LOVE MYSELF.” To write constantly in a notebook is to allow that notebook to become a proxy for oneself, a vessel for nurturing. Harriet is young enough that she hasn’t started consciously examining herself, but, by aggressively protecting time with her thoughts, she’s solidified a sense of self. She understands, vaguely, the value in recording the world around her. Those who’ve kept notebooks of their own will know those archives reveal more about young Harriet than anything else.

In 1995, at age nine, I was on my fourth notebook. In between entries about my neighbors and other minutiae is a page about my family. Specifically, about my mother’s miscarriage:

I’m really mad. I don’t really know what I’m mad at, but I am. This is a very private page that nobody can know about exept [sic] me and you. Today mom lost the baby. I was sad, and I still am, but everyone is acting like [my sister] Nena is the only one who’s sad. Today is the worst day of my life. I’m mad at Mom, Jordan, and NENA. I’m not talking to any of them. I’m being in a very bad mood.

Here is the value of the notebook, using it as a place not necessarily to explore emotions but simply to state them, turning it into a much-needed friend in a moment of feeling very alone. This is the basis of my continued love for Harriet, and for all the little girls writing furiously in the diaries and blogs and notebooks of their own. I switched quickly back to the normal fare, entries about some homemade purple frosted cake my mom made (“delicious”) or movies coming out soon (The Babysitters Club Movie, Toy Story). Each note is an equally valid moment in a continued mission of learning everything I could—including what it meant to be me.

Ariana Rebolini is the author with Katie Heaney of Public Relations, out now.