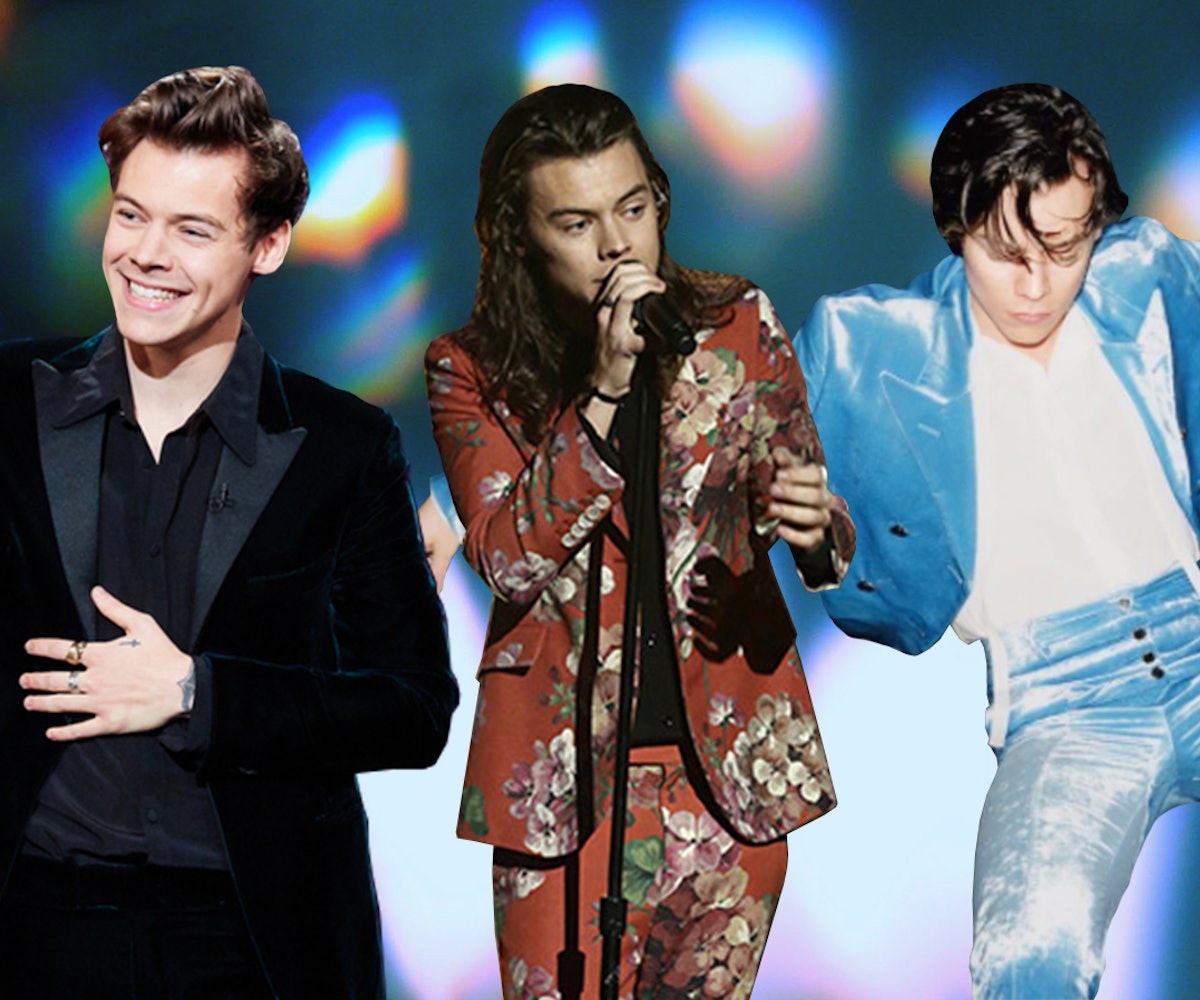 I never thought, at the ripe age of 27, I’d find myself admiring the style of a 23-year-old former boy band member. But, then again, the happenings of 2017 have caught a lot of us off guard. And so, here we are, and here I am to talk to you about Harry Styles' pantsuits.

Are you familiar? If you've been following the young star since his even younger One Direction days, I'm going to assume, yes. But maybe, like me, you're only just now becoming privy to his sartorial excellence and finding yourself spending more time than any one person should spend going through his outfit archives. Either way, I think we can all agree that Styles', um, style, is surpassed by few, if any, other celebrities right now.

Two people who would be quick to agree with us are Canadian sisters Michelle and Simone DeFacendis, the brains behind the Twitter and Instagram accounts Harry Wore What. There, the duo identifies Styles' many, many outfits for their 36K and 20K followers respectively. There are a lot of reasons why the singer's style deserves a spotlight. The sisters, for instance, were drawn to his ability to pull off daring looks. "He’s great at balancing bold prints and loves to experiment with different patterns, cuts, and textures," they tell us. "Also, he’s able to take his own spin on runway looks." They point out the fact that he's turned to not only major brands like Gucci but also lesser known designer such as Charles Jeffrey lately, to make him custom suits. "His unique sense of style keeps us excited and eager to see what he’s going to wear next."

Ditto! This week, in particular, I've found myself checking YouTube every morning to see what the singer's managed to pull together the night before for his residency on the James Corden's The Late Late Show. And, boy, has he been pulling out all of the suit stops. What's perhaps most intriguing about Styles is, as a coworker of mine points out, he doesn't have to dress as impeccably as he does. With looks, charm, and notoriety alone, he's already a star in every teenage (and maybe 20-something) girl's heart. Rather, he does so because it seems like he genuinely cares about not just the fashion industry but his own personal style a great deal. Which, then, begs the question, "Which brand is going to be the first to give this boy a campaign?"

Until that happens, scroll through to see some of our favorite suit moments from Styles. Do so while streaming his very impressive new solo album. Which is another thing we didn't anticipate enjoying in 2017. Life comes at you fast.

Styles' residency on The Late Late Show this week brought us gems like this green velvet number.

Our favorite from the past couple of days, though, has to be this incredible embroidered Gucci suit.

Of course, to know Styles is to know his affinity for a good, strong print. Like this checkered Vivienne Westwood waistcoat jacket and trousers that he styled with heeled Gucci loafers.

Even in his One Direction days, he was a standout. Reflecting on how Styles' style has changed over the years, the DeFacendis sisters tell us, "During his boy band days, he always wore what he wanted, but now his style has become an illustration for the music he’s making. Harry is making his mark as a solo artist by standing out and wearing looks that are tailored to him."

Baby blue was the color of choice—and what a good choice it was—for this shoot with Rolling Stone.

We don't know where to start: That pussy bow blouse! That McQueen paisley suit! Those rainbow Gucci loafers! His smoldering gaze!

What appears to be a simple mahogany suit from the front is detailed with a mustard side stripe.

The DeFacendis sisters list this pink bespoke suit from Edward Sexton, that Styles wore recently while performing on the Today Show, as one of their favorite style (Styles) moments. "It was simple yet bold with flared trousers and bright pink color," they tell us. "It was a perfect suit to commemorate the debut of his very pink album!"

Please take a moment to notice the dragon detailing. It's the little things.

So grateful that Styles invented the pinstripe suit. Bless.