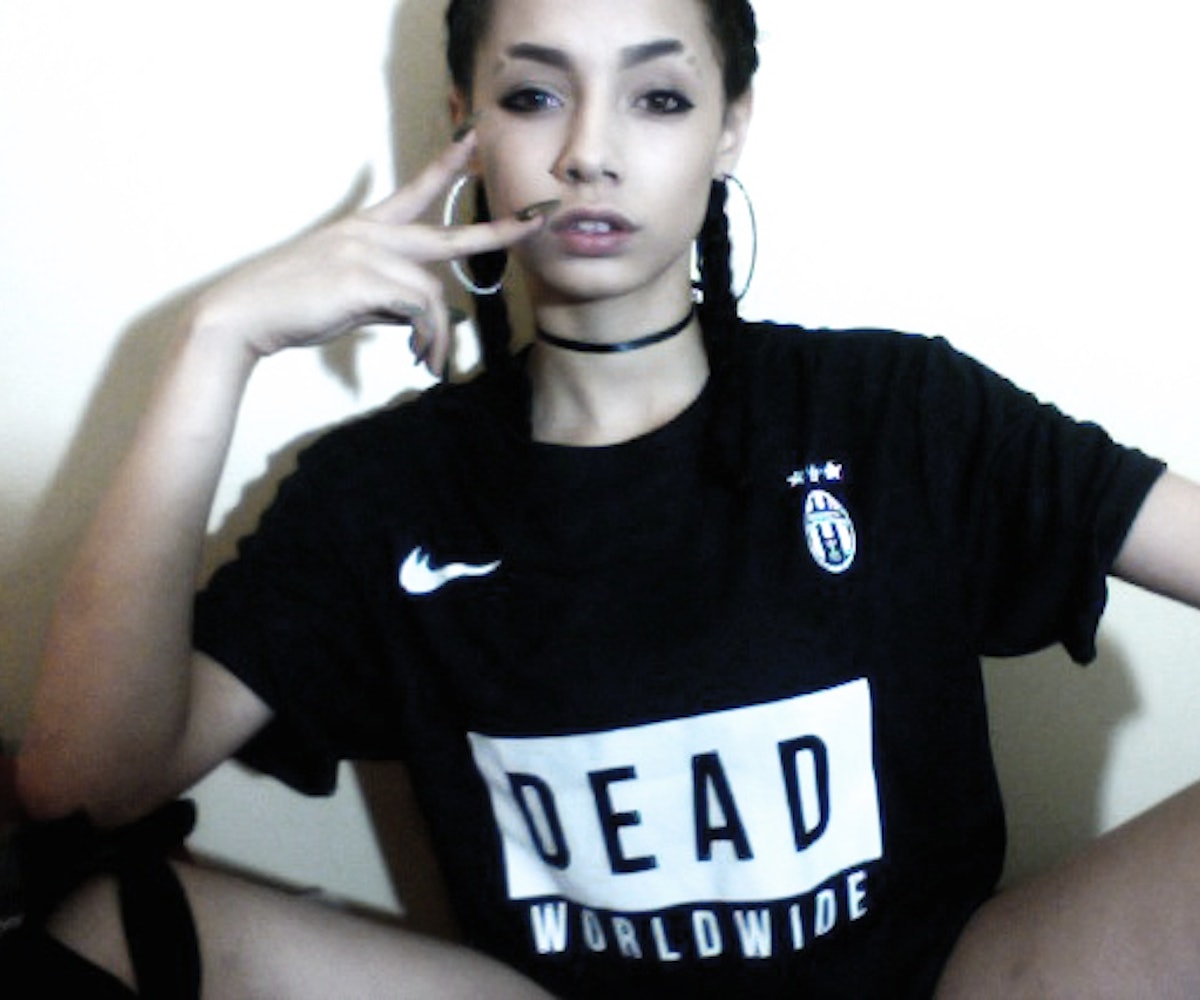 Deep in the heart of Tumblr, seeing athletic clothes paired with dyed hair and runny eyeliner isn't abnormal. In fact, it makes complete sense with the context of the '90s revival: a fascination with technology, labels a-plenty, and tons of lycra. Basically, it the Tumblr crowd has been embracing the rollerblading scene from Hackers for some time now.

Yet, in the last few weeks, the mainstream has become aware of the health goth (or #healthgoth) movement, which takes this aesthetic and ascribes an entire lifestyle. While the original Facebook, created by two musicians, seemed to be more concerned with the aesthetic, but the movement took off when DJ Johnny Love — an internet rabblerouser with long black hair and a hearty love of dark electronica, hailing from the southside of Chicago— took the idea of futuristic sportswear and helped put a real movement behind it. Kind of.

The essence of Health Goth is that it welcomes those who don't feel at home amidst testosterone-fueled, judgmental gym culture. Thinking about eating right or exercising regularly shouldn't feel like, in the eyes of Love, joining some sort of clean-cut fitness club. Instead, listen to industrial and wear your NIN t-shirt, and embrace the dark side of fitness. Love isn't the only person picking up on the fact that the Rick Owens-clad gang wants to get in shape: The dark, technology-obsessed offering from Alexander Wang for H&M demonstrates that workout gear isn't all muscle tees and Lululemon. In other words, you don't have to sacrifice edge in order to get in shape, and being into exercise doesn't mean one is image-obsessed. Gym, tan, and laundry has found its paler, moodier counterpart.

Of course, the problem here is that Love is just a knowledgable dude who makes interesting clothes that invert familiar labels, like ADIDAS or Nike. In order for an actual thesis to emerge, Love knows he's got to deliver a true manifesto for some cred. Which is what he is doing currently. Even if this is another health fad, the fact that it came from the internet and aims help the gym-shy pump up, is pretty exciting.

First of all, why is health goth so bro'd out? It's super great to see an alternative narrative of gym culture but I feel like that might be something that would really appeal to women, as well?

It's the opposite of bro-y. Most of the entire concept of healthgoth is to show people that you dont have to be a bro to go to the gym, you dont have to have a "suns out ,guns out" neon yellow tank top or Lululemon pants to exercise. The health goth fitness bible is fundamental basics that applies to both men and women, like the often-heard from women "I'd use weights but i dont want to get muscle-y," and the fact that what you eat effects 80% of what your body looks like, more than how much running or lifting you do.

So, racked.com kinda took down the "self-harm" aspect of the movement. Aside from implying that self-harm equals goth (it doesn't), are you worried that people are going to take that seriously? Do you ever want to espouse healthy over extremism?

There was never a self-harm aspect to the movement. That's a lazy association by people with preconceived notions. The only mentions to self harm I've ever made are very tongue-in-cheek references to doing every exercise properly, so as to NOT harm yourself, which is a critique that has been leveled at the OTHER fitness trend, Cross Fit, where you see all these ridiculous things with terrible form.

What do you think of Alexander Wang for H&M?

Can't wait to wear a hat that says WANG on my head and become a figurative dickhead.

How do you see health goth evolving?

It's only beginning to become something that is fully fleshed out. I'm working on a more in-depth guide than the fitness bible that is up now, but its definitely come a long way from being a Tumblr meme already.

Check out Johnny's picks for the ultimate health goth playlist.