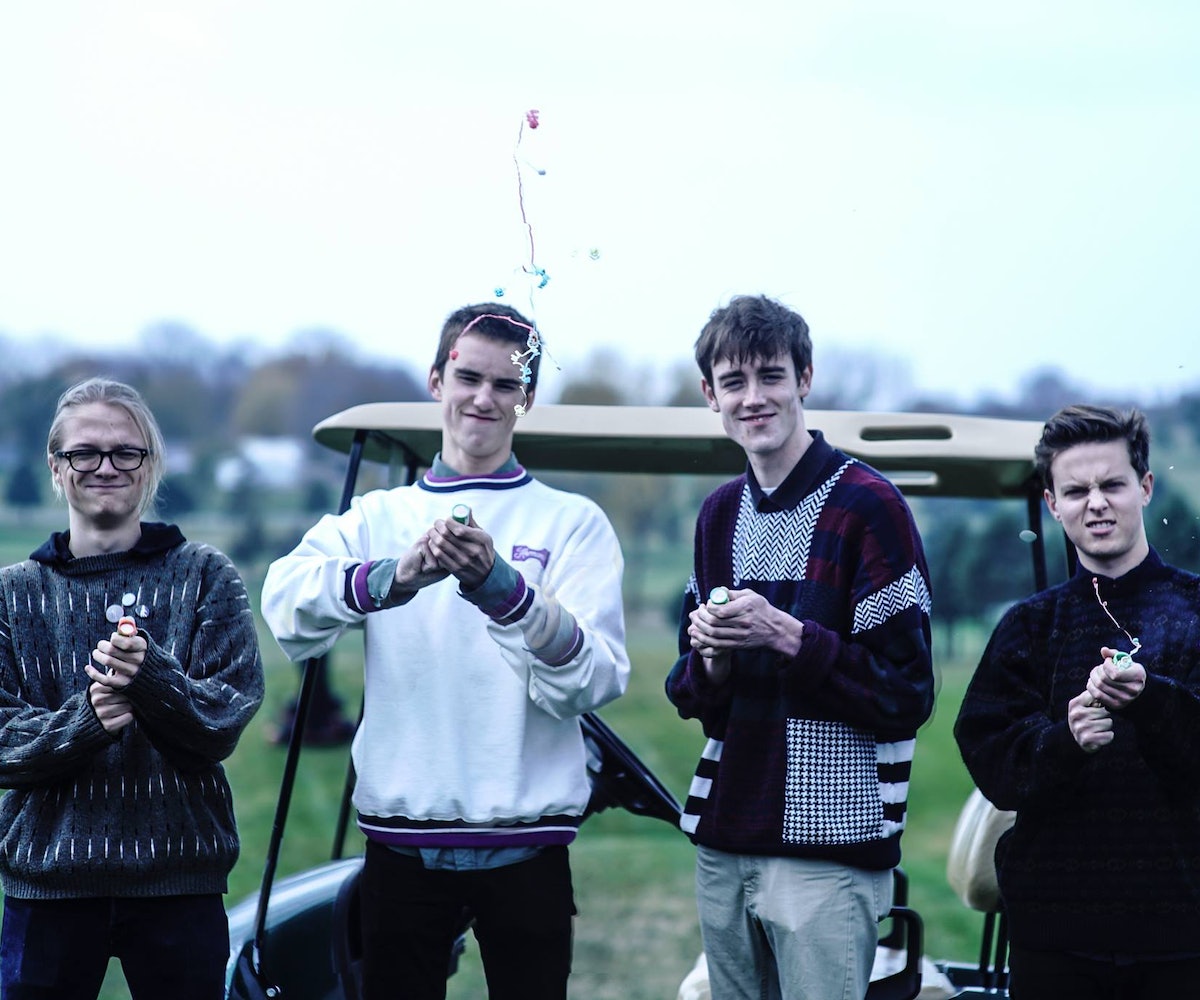 Two years ago, four young guys from a suburb of St. Paul, Minnesota set out to make music their friends could dance to. Little did they know they would end up creating something much bigger. Whistler Allen, Jake Luppen, Nathan Stocker, and Zach Sutton—or, rather, Beans, the Turntan, Stitches, and Espo—are the young geniuses behind Hippo Campus, the indie alternative pop band making its first appearance at SXSW this year. After starting out as an underground high school band, they’re now signed to a label, slated to play in Austin's SXSW, and are headed across North America to open for The Mowgli’s during their Kids in Love Tour. Pretty impressive for a band that still practices in their parents’ basements.

Even though they're just 19 and 20 years old, these guys are doing it and they’re doing it right, making their dreams become reality at a rapid pace. “We were like, we’re going to form this band because we just want to have a good time and that’s what we’ve been lucky enough to do,” says drummer Beans. Hippo Campus has been very lucky, if luck is what you want to call it. They released their first EP Bashful Creatures last November, signed to independent record label Grand Jury in February, and are prepping to play a major music festival and tour. They’re basically living every garage band’s dream. “It’s almost like it’s going over our heads too quickly for us, but we’re still there,” continues Beans.

Hippo Campus can likely attribute their rapid success to their genuine efforts and boyish style. Their use of clean guitar sounds, drum rims, seductive vocals, and witty, thoughtful lyrics surely helps, too; dancing shoes are a must at their live shows because it’s hard not to jive to Hippo Campus’ fun, unique sound. Their songs carry a common theme of the frivolous, yet valued freedom of youth. Says Turntan: “We’re at a point in our lives where we’re growing into young men. We made it through adolescence [so] it’s something really familiar to us. I think we can write about it really honestly.” And they’re definitely not too eager to grow up. According to guitarist Stitches, people never really do grow up–they just get good at pretending. Beans agrees: “I’d like to say that we know we won’t necessarily get rid of the kid in us.” This attitude has allowed them to forge a genuine friendship with their young fan base. Unlike most bands, Hippo Campus hangs out with their fans after shows, tweets at them, and sends them personal Snapchats. “We do what we can to pay them back for what they’ve given us,” says Turntan.

Even though they're underage and have even younger fans, it’s not uncommon for Hippo Campus to get put on the lineups for 21-plus shows. “It’s kind of nice because we get to feel better about ourselves. Like, oh, we’re playing 21-plus shows and we’re not 21? We must be fucking cool,” says Stitches. “We’re getting a lot of attention from the older crowd more and more, which is good,” says Beans. As Hippo Campus heads out on tour this spring, though, anyone will be able to dance along with the group, regardless of age.

From the tour, Hippo Campus is on to even bigger things. Based on their recent Instagram posts and Snapchat stories, they’ve been putting in work in the studio, and will soon be opening up for Walk the Moon and Milky Chance at the Red Rock Amphitheatre in Colorado. So if you’re in Austin for SXSW, be sure to vibe out with Hippo Campus because this is just the beginning of their exciting ride.