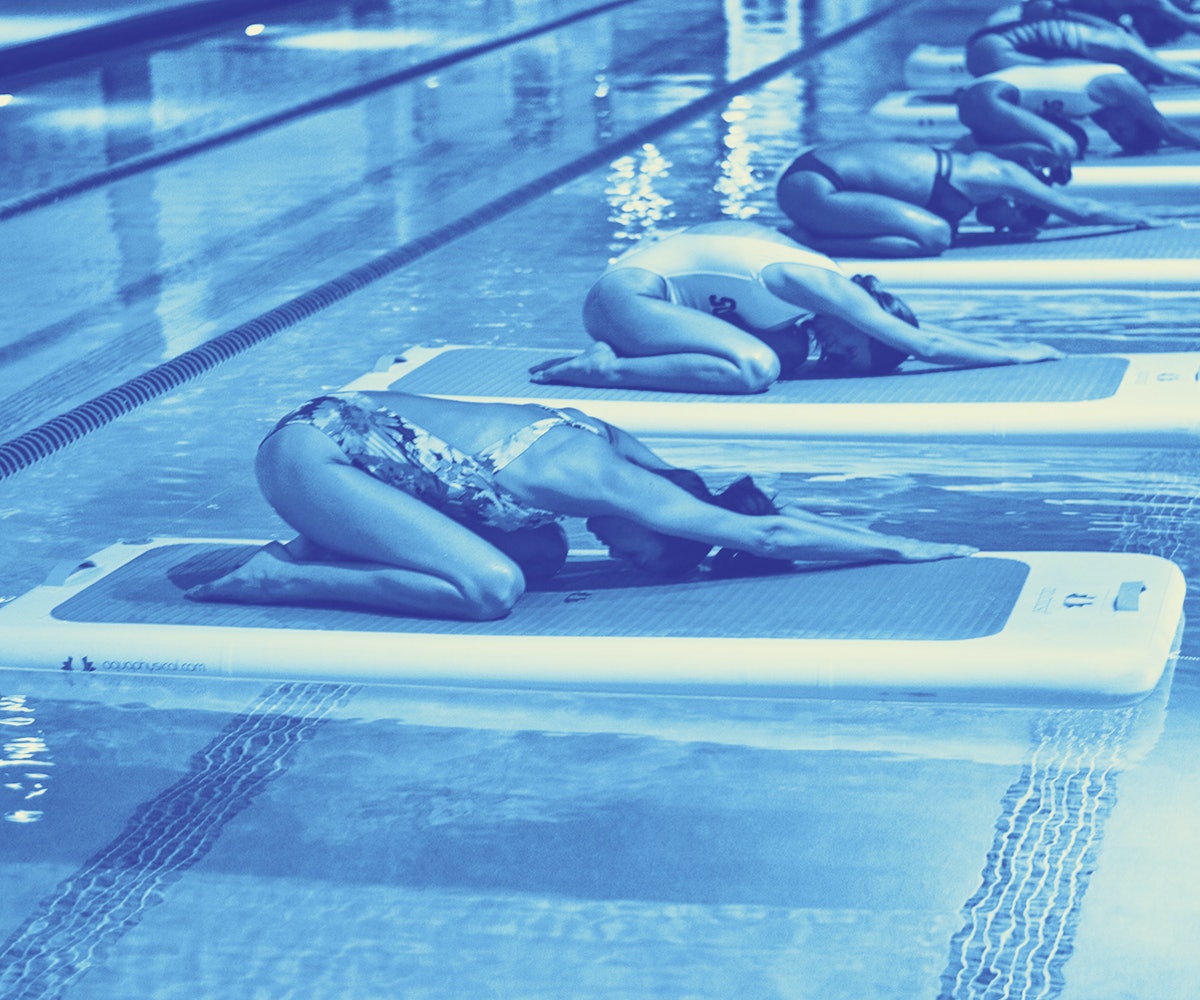 Let the record show: I do not like yoga, and it's not from lack of trying. Over the years of writing about fitness and reviewing the latest and greatest workouts, I've tried Bikram yoga (I threw up after each of the three classes I took; I didn't drink enough water, I wasn't prepared for what's coming—no matter what anyone says, it was the only workout that had ever prompted me to feel ill), aerial yoga (which admittedly was very fun, but felt more like an extended stretch followed by a cooling nap than a workout), and even hip-hop yoga (I am an awful dancer, so let's just leave the rest to your imagination), among other iterations of vinyasa, hatha, and ashtanga. And while for some of the unsatisfactory post-workout feelings, I have only myself to blame (why bother signing up for hip hop yoga when I have trouble finding even the beat of my own breathing, let alone a melody?), other less novelty practices have simply proved too slow or unstimulating for my personality.

And yet, when presented with a chance to try a brand-new yoga on a floating mat yoga called Holy Water, I was intrigued, if only to expand my yoga roster. Available exclusively at David Barton's uber-hip Manhattan TMPL Gym—which already boasts some of the innovative classes around, including virtual reality spin rides against a 30-foot video wall and aquatic fitness workouts—in the U.S., Holy Water takes yoga up a notch and then some by adding low-intensity strengthening exercises on top of having the class take place on... water. Yes, you'll be able to boast to anyone who'll listen that you walked on water.

After first seeing a video of a class on AquaBase boards, the first floating exercise mat, Barton immediately knew that he needed to bring the boards stateside to the TMPL pool and create a class around them. He contacted the U.K.-based creators of the mat to get his on the boards and launched the Holy Water class in the beginning of 2017. Unsurprisingly, the one-of-a-kind workout immediately skyrocketed in popularity, with all spots being claimed within the first three minutes of every sign-up opening. In fact, before my class begins, it is announced that the sign-up process will change to allow for more people who want to attend to actually have a chance to do so (those wanting to sign up will need to call in person or stop by the front desk 24 hours in advance to book their spot). And while it may seem at first like a fitness fad of the day, the floating mat serves more of a purpose than just to keep the easily bored motivated; it puts the user's balance and core to the test through a combination of yoga, Pilates, and strength exercises, meaning you will do both downward dog and push-ups while floating on a saltwater pool and listening to music.

The 45-minute class begins with students lining up on floating mats, that are tied on one end of the mat so not to float away entirely, and an introduction from the instructor Joana Meneses, who has taught similar classes for years before joining TMPL, in which she explains the different points of the board and where one should be looking for ideal balance (the front of the mat is your friend). And while form might seem like the last thing that would be on your mind (hello, you are trying to balance on a shaky mat in the middle of the water), it is actually the most important, with Meneses constantly correcting the students from the pool's edge. The board itself feels much sturdier than a surfboard and a lot more stable thanks to a rubber surface that prevents any obvious slipping. With every exercise, ranging from squats and burpees to warrior poses, there are at least three modification options, allowing everyone from beginners to devoted followers to continue to improve and be challenged. Since every move is done on water and requires balance and stability, every and any muscles that you may tout will engage twofold if not tenfold, whether you want it or not, while you carry out even the simplest moves.

But I know what you're thinking: What if you fall in? Rest assured, if you think it would unpleasant and cold experience, you couldn't be more off. The pool boats salt water and, as such, is warm. Therefore, it's in no way unpleasant to either fall into or get out from and continue with class even if you're wet. Before the class begins, Meneses says that it's actually good for first-timers to fall early on as that will reduce their anxiety of hitting the water and allow them to fully engage and challenge themselves without fear of falling, This should please any metropolitan city resident who has toyed with the idea of doing stand-up paddleboard yoga but ultimately rejected it in fear of a mutant disease taking over their body post-fall in the Hudson River.

At one point, students actually have to try and knock each other off the mats, with one-half of the class jumping on their mats causing waves while the other half tries to balance on one knee and hand as part of the exercise. While it might seem too cutthroat for your approach to fitness—it sure would have seemed to me if I heard about it first rather than experienced firsthand—it actually is the funnest part of the class. And as much as people want to push you off (because, like, it's Wipeout fun), they cheer you on when you manage to make it through the entire 30 seconds without falling off (I don't think I've ever held for dear life to anything as I did to that board on my first attempt; I was sad to discover that trying to make one fall isn't as easy as it looks, either). Similarly, after I was done with the class, which ended with a heavenly silent floating meditation session on the boards and some happy baby poses, a regular praised me and excitedly asked me what I thought of the class. My response? I drank the Kool-Aid... erm, holy water. Not only was the class incredibly fun, it flew by without me realizing how much of a workout I've done, which is a dream for anyone who works out more for their health than for enjoyment (how I envy the people that do); only a slight shake in my arms following a set of push-ups done by hoisting myself on the board from the water over and over again for a minute revealed how I would feel the workout later.

If I had any doubts even after that, that Holy Water is a full-body workout, they vanished the next day when I felt muscles I didn't know I had. In fact, my amused coworker watched me as I struggled to fit my arms, which were doing a dance routine unknown to me, into my coat sleeves. And that's the thing: While the novelty of this class may eventually wear off for some, the intensity won't. If this is yoga, you can consider me a convert; but while you're Namaste'ing, I will be concentrating on making some innocent fellow yogi fall into the water. Splash.

Holy Water class is currently only available to TMPL Gym members and to those who purchase gym day passes ($50).