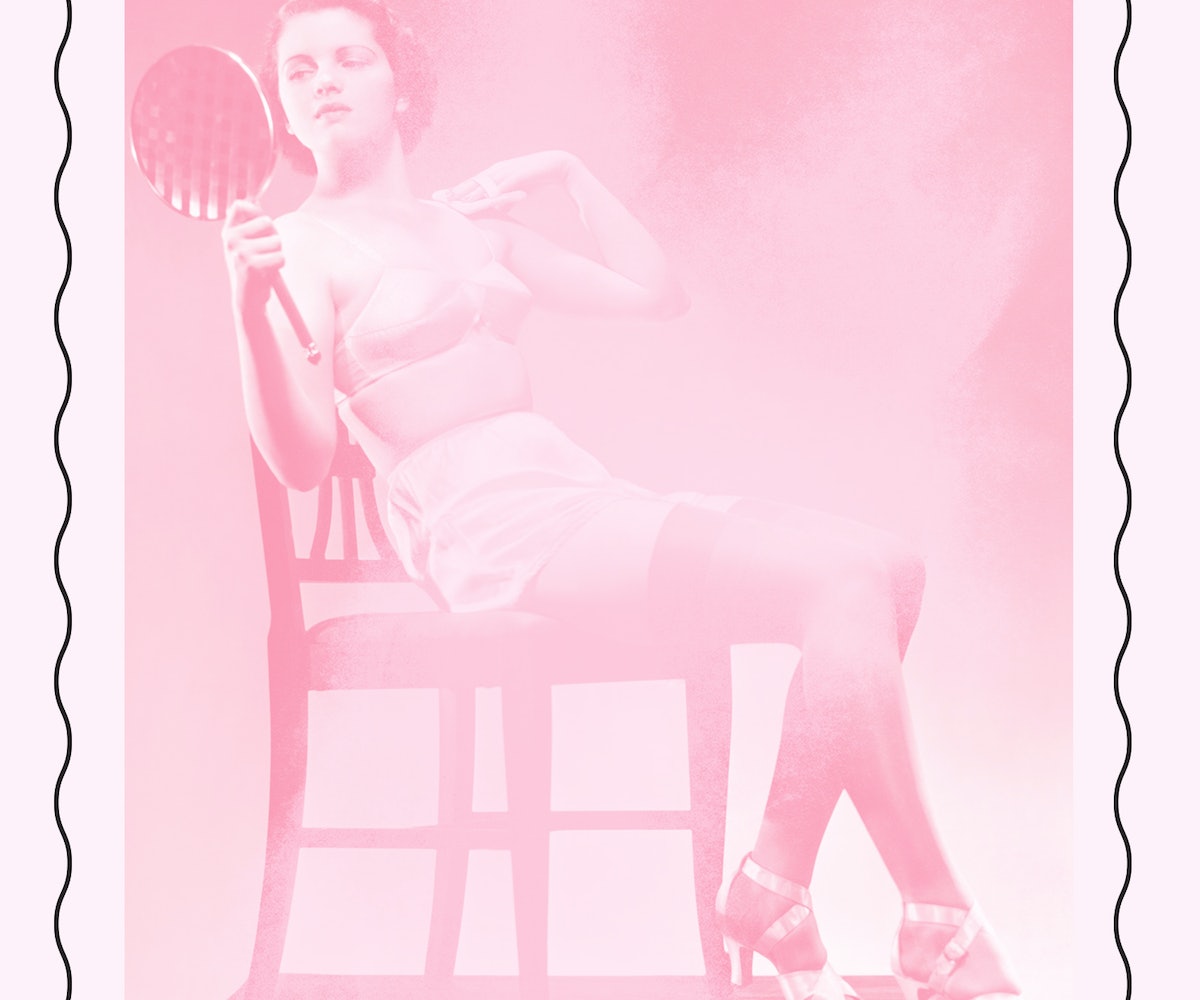 The time has come to accept the inevitable: You're growing up. Embrace it! Becoming an adult can be daunting, but not when you have guides as easy (and, let's face it, as cool) as the ones in our Adultify series. Now, you won't ever have to utter that cringe-worthy term “adulting" when you accomplish something, like doing your laundry—you know, basic, responsible grown-up activities—because you'll know these truths to be self-evident.

Confidence isn't something exclusively associated with adulthood. It's one of those convoluted terms people have been using willy nilly your whole life when they have nothing more thoughtful to say. Like, “Don't worry, just be confident." Oh, is it that easy? Okay, let me just do that then. Thanks for the grand advice.

Being confident can be extremely difficult, and something we have to build one tiny piece at a time over the course of years. True inner peace and confidence—unlike that cheap imitation of confidence you spend your youth fronting because you're smart enough to know that confidence is sexy, and you definitely want to be sexy—is really a never-ending battle, and, as you may have noticed, some people never quite get there. Which is such a pity, because some of the best things in life—from careers we truly enjoy to fulfilling romantic relationship—are much, much easier to obtain when you believe in yourself.

However, in 2016 confidence is more complex and harder to grasp than ever. A culture obsessed with perfection has led to one of our generation's biggest plagues: imposter syndrome. Imposter syndrome is the mindset that we don't deserve to be where we are. We fear that we're not good enough, smart enough, that we somehow actually lucked into success rather than earning it. It's the little voice in your head that tells you not to speak up in a meeting or the one that says the project you've been working on for months still isn't good enough to show anyone. It can be debilitating and, when left unchecked, grind our forward motion to a halt. But when you can start to shed that self-doubt and focus on owning your shit? Now that's real adulting. We tapped two experts in the field—Sarah Kaler, executive leadership coach behind Soul Powered, and Claire Shipman, journalist and author of The Confidence Code—for some advice on growing and stabilizing your confidence for long-term happiness.

1. Set realistic goals for yourself with a specific timeline

You might think goals are a no-brainer place to start. Which, like, yeah, they are because “the heart of creating confidence is about taking action,” according to Shipman. But there are some subtle but important parts of setting goals that can either work for or against your confidence. First of all, are you just setting goals for the sake of setting goals, or do the goals have a larger purpose? “I would start with a clear vision,” says Kaler. “I think if you start with, ‘What do I want? What do I want to create in my life or career and what do I ultimately want for myself?’ that sort of sense of vision then starts to create goals from that place, so the goals actually ladder up to where you want to be.” So goals shouldn’t just be these big concepts without immediate realistic actions that work up to them, but also they shouldn’t be too easy either. “You have to think of it like, 'What's the one thing I'm going to do today that's going to force me to get a little bit uncomfortable?’” says Shipman. “It absolutely helps to build confidence because, ultimately, once you start doing things, the sense of your ability builds upon itself.”

You have to know what you stand for, what you believe in, what is important to you, and what is worth fighting for. Kaler suggests making a list of your top three to five core values and thinking about their roles in your life. Is it honesty? Working hard? Family? Equality? Are you conservative or progressive—why? Religious, agnostic, atheist—why? Your values can really be anything you believe is important on a philosophical level, but knowing what you believe is key. “It’s a great filter for how you make choices, decisions, how you take actions,” says Kaler. “And are you in alignment with your actions? Or are you not? Are you compromising or are you not?” Also, Shipman makes the point that if you know what you stand for, you’re much less likely to let others push their beliefs on you, which can really steal your confidence and ignite that fear of being an imposter.

In recent years, there’s been scientific research that suggests self-control is kind of like a muscle. Every time you actively exercise that muscle, it gets stronger, and it makes invoking that control and creating habits easier the more you do it. What feels better than checking something off of your to-do list or saying you’re going to do something and then actually doing it? It’s the best feeling! You could force yourself to do something as simple as writing every day for 15 minutes or going to the gym every Sunday. The more you repeat those habits, the more it fuels your confidence and makes you feel efficient. Shipman also suggests starting off the process by building mental habits:

I think figuring out how you make something a habit can be hard. It seems like it should be easy to do, but sometimes it requires a lot of thought about your own routines and what your preferences are. Start by building mental habits that combat rumination, over-thinking, and negative thoughts… I think that, to me, is the cornerstone of positive outlook. Negative thoughts are much stickier than positive thoughts.

4. Build a community you admire and be kind to them

Next time you stumble upon the Instagram of someone that is so cool and beautiful and successful that the jealousy starts to roll in like a thick fog and you start to beat yourself up for not having good enough eyebrows or for not creating enough art or for not having enough followers—just stop. Comparing ourselves to others is another confidence plague that rots your soul. I know this can be hard to overcome. As women, we are literally conditioned to see all other women as threats to our own value and as competition. For your own well-being and confidence, you have to break this cycle. “If you have that sense of envy, get curious about it instead of making yourself out to seem wrong or bad or not good enough,” says Kaler. “Get curious about how you can relate to that person or learn from that person or how you can be friends with that person. There is potentially so much to gain by building community versus seeing it as 'I'm not enough.’” Surround yourself with people that inspire you, that motivate you, that are fun and challenge you, people that you think are extraordinary—these are the people who will help you grow. And, perhaps most importantly, come to them from a kind, generous place. You can’t just take and take from them and build yourself up; there has to be reciprocity.

5. Reflect, but don’t dwell on the past

You definitely don’t want to be constantly beating yourself up and bombarding yourself with doubt about your choices—because, as you know, there’s no changing the past. These are the choices you’ve made, and you have to be at peace with them. However, it’s so important to be able to reflect on your choices and their impact and find ways to grow from them. According to Kaler, there are three main elements you need for confidence: clarity, courage, and some forward action. “You don't really build confidence by just sitting behind your computer. You actually have to do something and you have to be something,” Kaler says. “It's an interactive process being confident. What's interesting about the self-reflection is admitting or accepting where you have been in the past that wasn't working. Part of this is taking the responsibility for what's not working in your life. I think that can be uncomfortable for a lot of people.”

Your voice is a tool, a weapon, and a window into your soul. It is everything, and if you keep it bottled up inside you, it will strangle your confidence. “Your voice as a woman is crucial to life as the air you breath. That's how I feel about it,” says Kaler. Not using your voice can cause everything from missed opportunities to being left out of decision-making to silently condoning things you fundamentally disagree with. But also, speaking helps you find your own truth. Have you ever been in a free-flowing conversation where you’ve said something so deep and smart and thought, Wow, I didn’t know I felt that way before I said it, but I really do. It’s so enlightening and reminds us that, yes, in fact, we do have important things to say. Feed your confidence with your voice.

7. Be kind to yourself

Please do not forget about yourself. We have to put on our boxing gloves and fight against the urge to let imposter syndrome eat up our insides and make us hate ourselves. “Here is the tricky part when it comes to imposter syndrome,” says Kaler. “Everything is so externally validated. That's where this whole thing comes from, so what is actually required of people is that they have to stop focusing so much on the external and they actively have to trust themselves. So be patient with yourself and actually trust yourself and your own timing and stop focussing so much on that external validation.”

According to Shipman, having patience with yourself is just as important as having patience with others.” They're doing a lot of really interesting research on how much it affects a positive outlook and our brain,” says Shipman. “It's interesting because that's the cornerstone of self-compassion, giving yourself the same break that you'd give a friend or treating yourself the same way as if you were having a conversation with a friend who has screwed up or making too much of something. Why can't we treat ourselves at least as well as we would treat a good friend?”

8. A pinch of nihilism

Sometimes, when you’re feeling your confidence in short supply and that self-doubt is tightening its grip, I find it can be helpful to just be a little bit nihilistic. Like, if you’re questioning whether you should pitch an idea to your boss or whether you should text back someone you went on a date with, ask yourself, What does it even matter anyway? What if I fail? What if they say no? It doesn’t matter! Fuck it! Just do it! Most of the jobs and phases and people in your life are fleeting, so why let your lack of confidence hold you back? Even if you fail this time, what does it actually matter in the grand scheme of things? Nothing! Kaler agrees:

I tend to think of it as, "What's the worst case scenario here?" You get a no? Great! Or your project fails? Great! Because you're going to have massive learning. And you get so much life experience from this. Then, next time, you’re going to knock it out of the park. I think it comes back to people being so afraid to look bad or being so afraid of what others are going to think. Let's try something. Let's fail. The breakdown leads to the breakthrough. A few bad sketches lead to a good one, or five pitches that don't get accepted leads to, oh my god, a pitch that lands. Once people get into that momentum, they feel it, and they build a confidence around it.