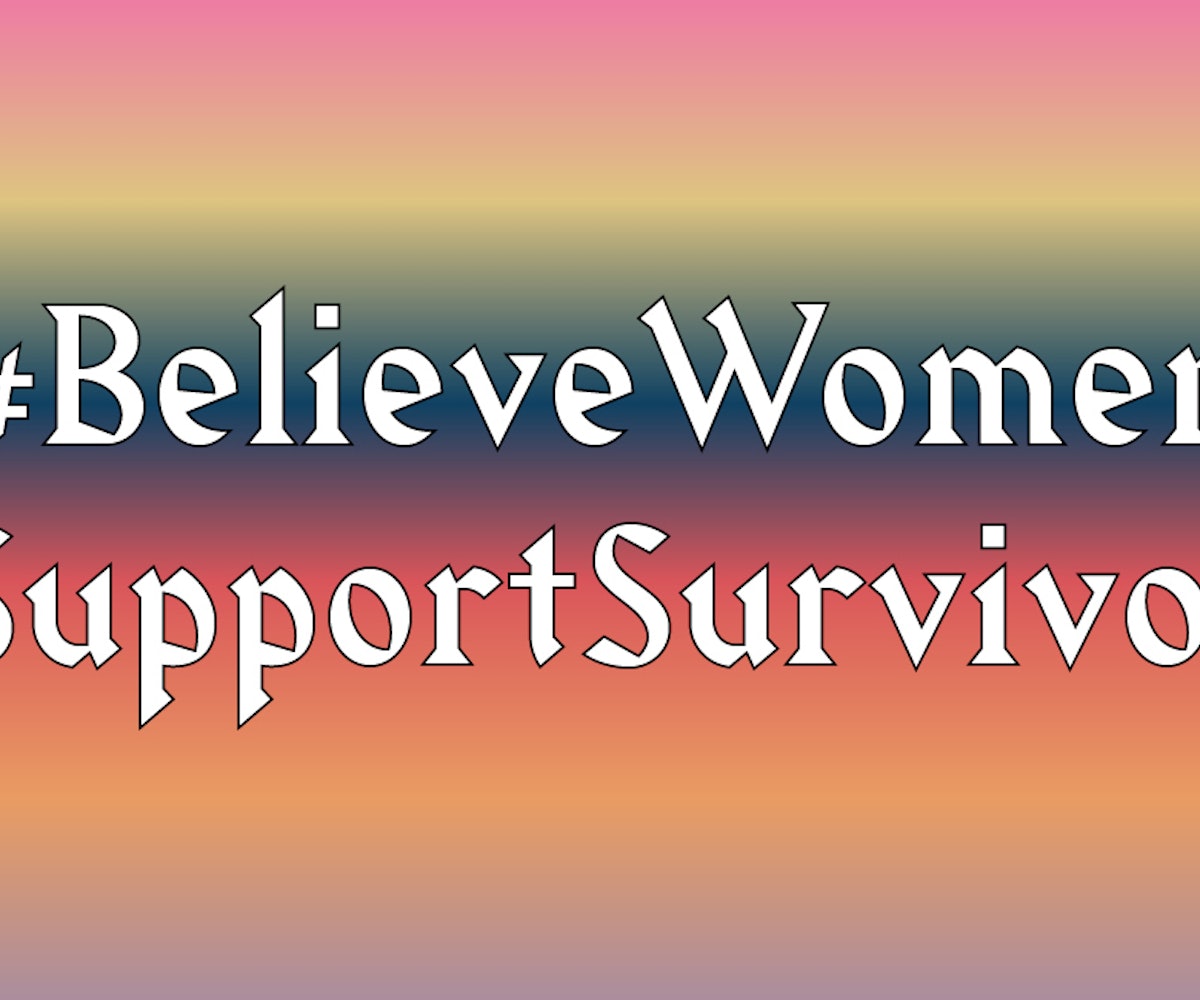 In the last couple of years, we’ve been inundated with political news about sexual harassment and assault, but this type of news has reached a new frequency with Brett Kavanaugh's nomination to the Supreme Court. Kavanaugh has been accused of sexual assault by multiple women, and his confirmation hearing and testimony have inspired tons of articles and reports, with sometimes graphic and thoroughly detailed accounts from victims.

Not only have I read these accounts, but also I’ve written many, as well as covered the horrific treatment his alleged victims have endured by Kavanaugh supporters—including the president. And it’s taken its toll on me, and likely on other survivors who are trying to stay informed without remembering some of their own trauma.

With a news cycle like this, it’s not hard to feel like you have to put your mental health at risk in order to stay in the know. But it doesn't have to be that way: There are actually tools to use and things to do to avoid these incredibly painful triggers. I spoke with Sara Frischer, a psychiatric nurse practitioner from Union Square Practice, who had some pointers on how to navigate this kind of news cycle.

There are a few key things that may trigger unwanted memories, Frischer told me. There is no denying the bravery of what women like Dr. Christine Blasey Ford, Deborah Ramirez, and Julie Swetnick have done in recalling their personal accounts of sexual assault, but, Frischer tells me, "For survivors, especially those that have not spoken about their trauma [or] done any work to process it… hearing the accounts of the detailed sexual assault can be very triggering.” Hearing such in-depth allegations can echo one’s own past experiences with sexual assault, and can force people to relive that trauma.

Then also, the fact that the accusers’ stories are being either ignored or demeaned by many people in positions of power, can make survivors even more susceptible to their own trauma being triggered. Frischer described the reaction to Dr. Ford’s testimony, saying, “The validity of her statement is being questioned, and I think that's really where survivors struggle.” Speaking on Dr. Ford’s loss of memory surrounding her assault, Frischer says, “One of our greatest survival methods in a trauma is dissociation, and it protects us. So because we disassociate, we can't remember all of the content.” Frischer notes that this dissociation is “more common than not,” and that there are survivors who have the same experience. So, then, “A survivor witnessing that will make them question their own recollection of their memory and how they're experiencing the memories of their trauma.”

Further, it's important to note that many of the people in power, who are praising Kavanaugh and deriding Ford, have been accused of sexual assault as well. “So many members of the Trump administration, past and present, have been charged with so many offenses, and it just devalues the experience for the victims who are speaking out,” Frischer notes. “Which, in turn, is extremely triggering for survivors.” When they are shown, repeatedly, that speaking up doesn’t seem to have an effect on the lives of the accused, victims are more likely to internalize their own shame, which can later rear its head in harmful ways.

So what can a survivor do? When trying to navigate these news stories which may have a negative effect on your mental health, Frischer says that staying informed may not be possible. “The honest truth is that, for some people, staying informed is too much right now.” It’s not a sign of weakness to forego the rabbit hole of articles and phone notifications telling you the latest terrible thing that has happened. “I think it's even an admirable option to choose self-preservation and not be informed right now,” she says. Don’t damage your well-being just to stay on top of the news.

Of course, if the news is triggering your own trauma, it could be a sign that you need to seek help from a mental health professional. This is not always readily available or affordable, though, so Frischer shared some tips to help people cope on their own. These aren’t a substitute for seeking professional counsel, but they might help in moments of distress, or allow you to circumvent those triggering thoughts.

First off, Frischer says, try your best to read the news instead of watching videos. “If the headline is something that's going to be triggering then just don't read the article,” she advises. “This also gives clients a little bit more control in getting their news information. So, if they're reading an article and something becomes triggering, before they get actively triggered, just stop reading.” Giving yourself more control over your news intake will allow you to have an easy way out if things become too much. Frischer also suggests having a close friend filter the news for you might help sideline the triggering effects. “Hopefully if it's a close confidant, they really know what would trigger you and could just give you information in a safer manner,” she notes.

Frischer provided some grounding techniques that she uses with her clients, and urges them to use at home. When seeing these news stories, she says, "Even if they didn't want the information, even if they weren't gathering it readily, then they can remind themselves of the positive things that have come out of this: All the people who have shared their stories, Dr. Ford's bravery." She encourages her clients to “place their feet on the floor, feel themselves in the chair, remind themselves that they're in the present moment.”

Frischer also tells me that, when people are triggered, it is because their sympathetic nervous system is activated, which results in a fight-or-flight reaction, causing things like increased heart rate and blood pressure. She suggests a couple of techniques that activate the parasympathetic nervous system, which "promotes a sense of calm and relaxation." One way to do this is by applying cold water to the face. "It's actually best for clients to put their face in a bowl of ice cold water," she says, "but this can be adapted." She suggests putting an ice pack over the eyes, "making certain to cover [your] temporal regions" like the sides of the forehead. She notes that there are also towels that you can carry in your bag which can stay cool for 12 hours at a time.

She also suggests paced breathing, which she describes as "a breathing exercise where clients focus on their breath and make their exhalation longer than their inhalation." Breathing in for a count of five and out for a count of seven, for about five to 10 breathing cycles, can help tremendously. Frischer says to make sure you are seated comfortably while doing this, and "before starting the paced breathing, notice how [your] body is supported by the chair underneath [you], and how [your] feet are placed securely on the ground."

Other helpful resources Frischer suggests are RAINN, the Rape, Abuse, and Incest National Network, noting that “if someone is finding themselves triggered in the moment, they can actually call their 24-hour hotline.” There's also the Sidran Institute, which is actually a training institute but which has loads of resources on its website. "I send clients' family members there all the time," she says. The National Sexual Violence Resource Center also provides resources and guidance.

But also, Frischer encourages us to remember all of the positives that are coming out of this news cycle: "This is a hard time, but also people are speaking out, and people are being super-brave and courageous, and hopefully more people are going to get help because of it.”

NEXT UP
Culture
6 Shows To Binge Once You've Finished 'The White Lotus'
Culture
For The Girls Of Forever Magazine, What's Forever Is Friendship
Culture
An Ode To Stripperweb, The Beloved Sex Worker Forum
Culture
Who Won At The 2023 Grammys
Style + Culture, delivered straight to your inbox.