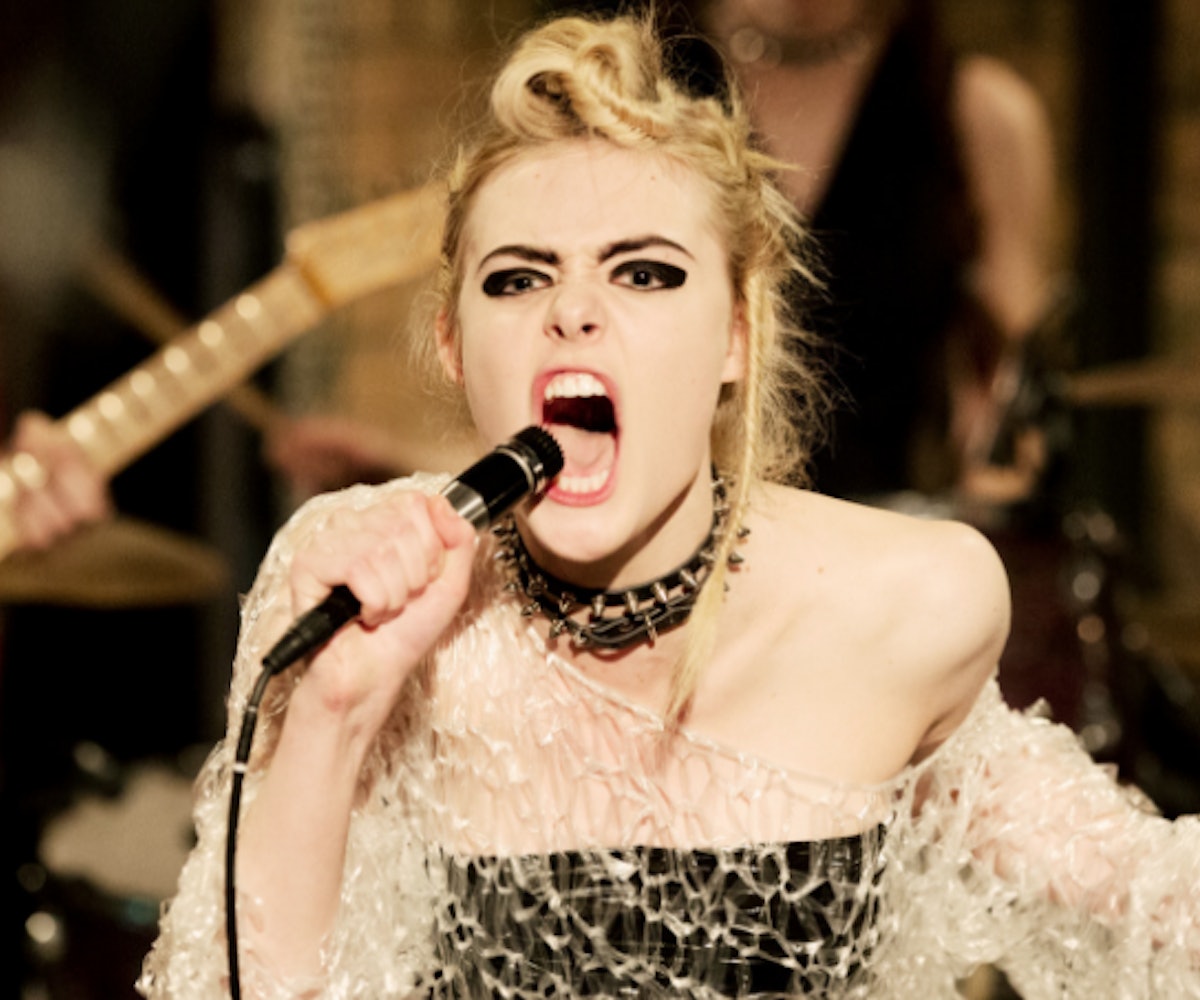 From kooky aesthetic choices to non sequitur plot twists, there’s a lot to unpack in John Cameron Mitchell’s punk-alien romance, How to Talk to Girls at Parties.

A deliriously batshit movie that probably requires several watches to fully understand, we turned to director Mitchell to help explain a few of the most bizarre bits of the film. Read his breakdown, below.

How To Talk To Girls At Parties is in theaters May 25.

Can we just start by talking about the fact that all the aliens have to be dressed in these garish Union Jack ponchos and travel in a group whenever they go out amongst humans?

They're trying to blend in... because that’s what humans do, right? The flag outfits are very garish, but it's also taking place during the Queen's Silver Jubilee in 1977, so the flag is everywhere. So Sandy Powell, who did the costumes, said, "Well, we don't have money for extra costumes for these aliens, so should they only have one alien outfit?" And I was like, "What about rain ponchos? I mean, it is England." And she's like, "Union Jack. British Flag." But what we ended up getting was an accidental Brexit metaphor, because there's a bunch of people walking off a building and wearing these flags to avoid human contamination. Which is really what Brexit and our own Mexican wall are about, isn't it? It's like, "Let's all die white together." And, that's what the end of the movie is.

So, we ended up having these absurd disguises that had some metaphoric weight. When it played at Cannes, the British critics were like, "Oh my god, this is really moving—people jumping off a building."

That moment also felt pretty Jonestown-y, to be honest.

Well, that's what the characters say, right? “I think she's in a cult...  suicide pacts.” And, cults were very au courant then in the '70s.

Yeah, they just are incorporated now. And, they're called Churches of Scientology.

All The Interpretative Dancing

I'm also wondering about the aliens’ interpretive dancing throughout the movie. Who choreographed them and why did you feel that was necessary to include?

Lea Thompson—who is a famous choreographer who came out of the punk era—was brought in [to help differentiate the different groups that made up the larger alien group]. She and I rehearsed each colony separately, and each colony is based on a chakra.

Each chakra has a whole ethos, a whole philosophy, and a corresponding color. The solar plexus is yellow, the heart is green, the voice is blue, the third eye is purple, and then this [at the top of your head] is white, the sex is orange, and the perineum is red. So, we had a palette, and we had an ethos to follow. So, of course, the sexual colony—the orange Stellas—they got to continue that tradition of alien abduction and probing, but in a spiritual way. They don’t have much emotion, and it’s only by being inside of a human that they feel human emotion. And they change [the humans they abduct]. Like, they changed the macho-punk misogynist [by probing around his anus]. Every straight boy needs to discover his asshole, after all.

I think the world would be a better place if that was a little more open for straight boys. If only just to have more fun!

Not [all of the groups actually dance]. The aliens each have their designations and also have [individual] ways of moving. So, we had the third eye colony, but they don’t really dance—they just kind of don’t blink and look straight at someone. The blue voice colony, they only make sounds they’re singing—so they also don’t do a lot of dancing. [The yellow solar plexus colony], they don’t speak at all, but they’re the best dancers. The orange sexual ones have these stiletto heels, and their movement is based on spiders’ legs. And, the red colony, which is the perineum, they’re an actual acrobatic troupe... they’re all about balance.

We spent time with the punks, too. You know, some of those were real punks. But punk at that time was different from now. Punk is a lot of things, it's different now than it was in the early '80s when it was more hard-core and sometimes right-wing. That’s why the character keeps saying, “What is punk?” because, like obscenity, you can’t define it, but you know it when you see it. Also, punk people don’t want to be told what punk is. If you define it too much, it’s not punk. They have a lot of rules. Which seems silly when you're supposed to be anti-conformist.

To me, I've always been a punk, but in my own definition of it, which is an outsider who doesn't necessarily want to smash things, but wants the stuff I make to be entertaining and accessible. But I also really want it to have underlying messages that are upsetting gender roles, political assumptions, assumptions of sexuality, and its place in the world. I want to break it up a little bit, but not to just shock, but to kind of make things better.

The Punks Vs. Aliens Battle

What about the final battle at the mansion? With the punks fighting with like boom boxes and the aliens wriggling and screaming around in retaliation.

We were going to have an actual fight scene, and we shot something, but it just didn't look good. That takes Game of Thrones type of schedules, you know? And we didn't have time for all that. But we had fun with the punks versus aliens sequence. Like, the singer aliens used their screaming power to repel them, right? But then Nicole [Kidman’s character is] like, "Get the new single! Play the new single." She uses punk music to fight back, and that's how the punks saw their music—as a weapon.

Nicole Kidman As Queen Of The Punks

Speaking of that, what was it like working with Nicole Kidman as Boadicea, Zan’s newfound human mentor?

She's not very punk, but she is a true punk in the sense that she doesn’t like to be tied down. She's a true feminist who seeks action. She wants to go where the point of most resistance in terms of the work, so she'll seek out weird directors to challenge her. You don’t usually get people [of her caliber]—Kate Winslet and such—seeking out Lars Von Trier, Park Chan Wook, and me, these oddballs [offering them] a small role like this.

She's, like, kind of a country music fan who loves horses, and she's like, "John, I'm not really in my comfort zone here." And then someone hit her in the head with a guitar, and I'm like, "Thank you, Nicole. We're almost done." Then she said, "John, someone just spit in my face!" And I’m like, "Can you use it?" So she smacked him across the face, and I kept it.

It's like, she's not used to the messiness because she's a regal, white woman on a horse, right? But she could lead you into battle.

She did come in on her first day though, and she had just finished a big play in London. But she was, like, vomiting on her way in and was like, "We're ready to go," and I'm like, “No!” She almost threw up on camera... But she was game, she was gonna do it.

We do have it in other scenes though—throwing up into peoples' mouths.

Oh right, who wrote the mouth-to-mouth throwup scene between Zan and Enn?

I did, of course!

I mean, we've all almost been there. We've all thrown up in our own mouths, right? Or just that kind of acid... oh god.

Is that true intimacy?

I think so, if you can accept that... I was also thinking of, like, the mother bird regurgitating the food into the child's mouth [with that scene]. So, there's a metaphor there, too. I mean, there's all these matriarchs, queen characters in this piece. Even though it's about a boy who's a virgin and doesn't know about girls on the outside, the movie is really more about the motherhood and parenthood. After all, in the middle of the song, [Elle Fanning’s character] gets pregnant. She doesn't even have sex... it's a cosmic fertilization.