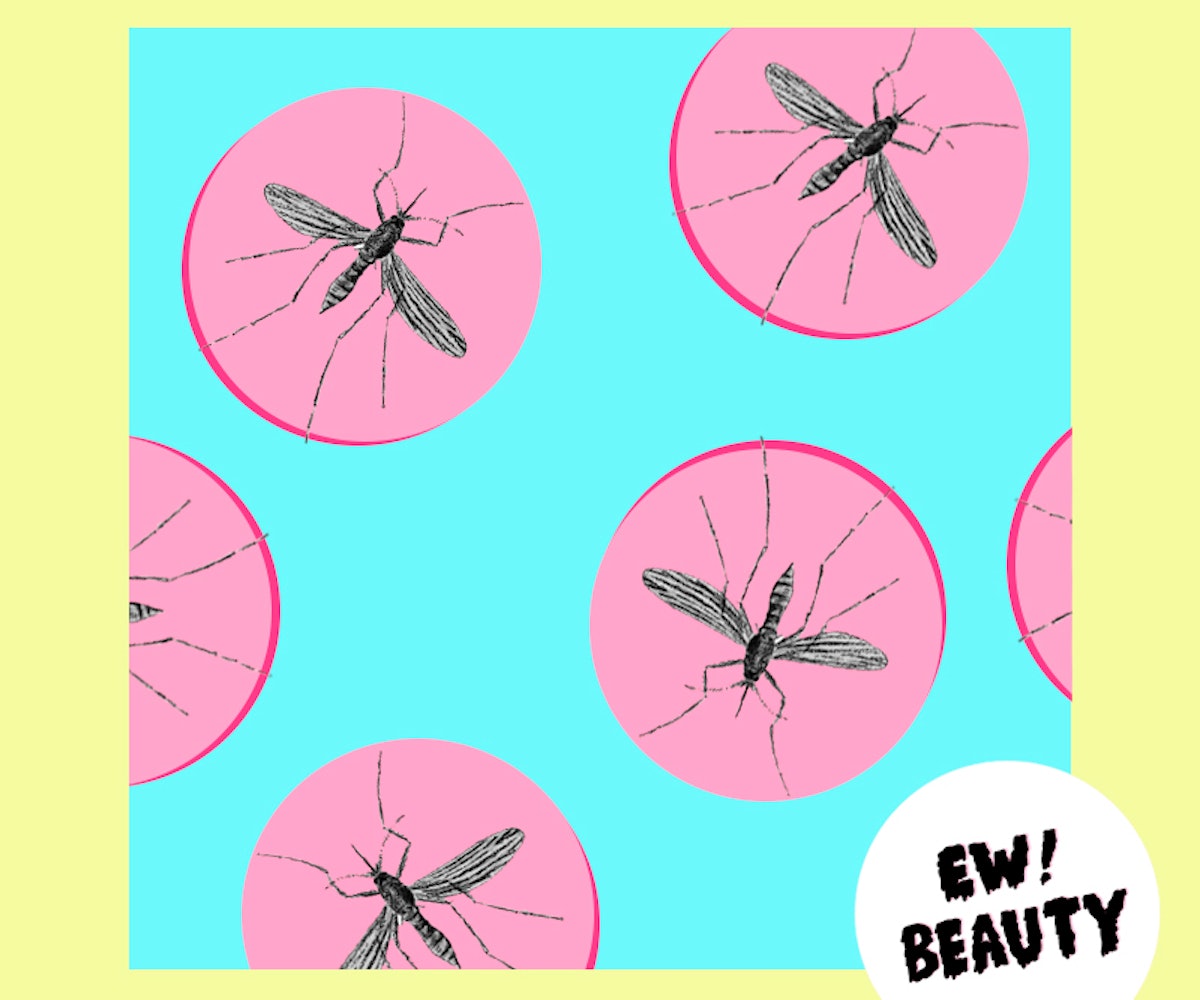 Let’s face it: Along with summer’s heat, humidity, and other sweat-inducing qualities comes a ton of gross beauty problems. From dry, cracked feet to ingrown hairs and chafing, there’s a lot that can hold you back from living the confident poolside life you’re destined to lead. But don’t worry—we’re talking to experts about how to fix them. Welcome to Ew! Beauty.

Even though we're already preparing for the end of summer's many beauty plagues, multiple elements are still working against us—and nothing wreaks havoc like a bug. It doesn't matter where you are, bugs will find you, and when they do, they're only thinking one thing: fast food. They see you when you're sleeping, they know when you're awake; they thrive in darkness and in light, and there's really no escape. When they're gone, you're inevitably left with itchy, swollen evidence of their presence, which is why the best thing for your skin is to make sure you don't get bitten in the first place.

Dr. Robert Buka, a board certified dermatologist based in New York, said that the most common bites he sees during this time of year come from mosquitos, gnats, and fleas. Sometimes, he'll even see what he classifies as exotic bites from spiders and smaller insects like bed bugs. No matter the type of bug, reactions to the bites (i.e. raised, red bumps) form about 12 to 24 hours after the immune system reacts to the venom.

Insects survive off carbon dioxide—it's their life source; it's what attracts them to us. Things like estradiol and lactic acid are secondary attractors, but they pale in comparison to good old-fashioned CO2. You know how we all have that one friend who claims that bugs can't get enough of them? Well, it turns out they're not just narcissists—some people are just more prone to bug bites. Dr. Jonathan Day, a professor of medical entomology at the University of Florida, says that some people are attractors because of their naturally high metabolic rate and resting heart rates (anything above 72). With those two things combined, these individuals produce more carbon dioxide than average.

There is also a level of sensitivity involved—some people are hyper-aware of the insects making contact with their skin while others are less irritated. Additionally, some insects use visual cues to help guide them to a host. Unfortunately, those of us who wouldn't be caught dead wearing anything that's not black are in for a rude awakening. Dark colors contrast with the horizon which makes you a more visible target for mosquitoes, whereas light colors will cause you to blend in with the background. In other words, goths might want to alter their wardrobe—at least for summer. Tight, breathable fabrics keep bugs out so it's also worth investing in athletic wear if you're not already riding the athleisure wave.

While there is an assortment of products to choose from that promise to repel insects, not all of them will actually get the job done. You know all of those ultra high frequency and sound-emitting devices that claim to repel bugs? Dr. Day says none of them work. Your best bets when it comes to warding off unwanted bites are products that contain DEET, picaridin, or oils from plants like citron, geranium, and eucalyptus. Natural ingredients work by irritating the bugs so they won't want to land on your skin to feed, but you'll constantly have to reapply because they won't last long. And, frankly, nothing beats DEET.

Since the 1950s, DEET, aka diethyltoluamide oil, has been used as an active ingredient in insect repellents. "There was some concern about the inhalation of DEET leading to throat cancers, which has since been disproven," says Dr. Buka. "There’s still a lot of stigma against DEET, and that’s too bad because it is a very safe agent, even down to infancy."

The most important thing to remember when you apply bug spray is to spritz it on your hands and then rub it into your skin. Dr. Day says that spraying it directly on your body from the can is a rookie mistake, despite what the commercials on television show you. As far as your skin-care routine is concerned, the spray should be the last step in the process. Dr. Buka instructs putting makeup on first and then sunscreen, which would be followed by bug spray. Buka prefers water-based pump sprays because they irritate the skin less than aerosol cans containing alcohol.

Both doctors recommend waiting until you know that you're in a setting where you are surrounded by bugs so the repellent won't wear off. (The strongest sprays last about 90 minutes.) To further help get the timing of your application just right, keep in mind that bugs are most active at sunrise and sunset, and this goes for both indoor and outdoor creatures.

We've rounded up some of the most effective DEET-free and DEET-filled bug repellents to help guide you toward an itchy bump-free summer. Check out the list below, because bug, bye!