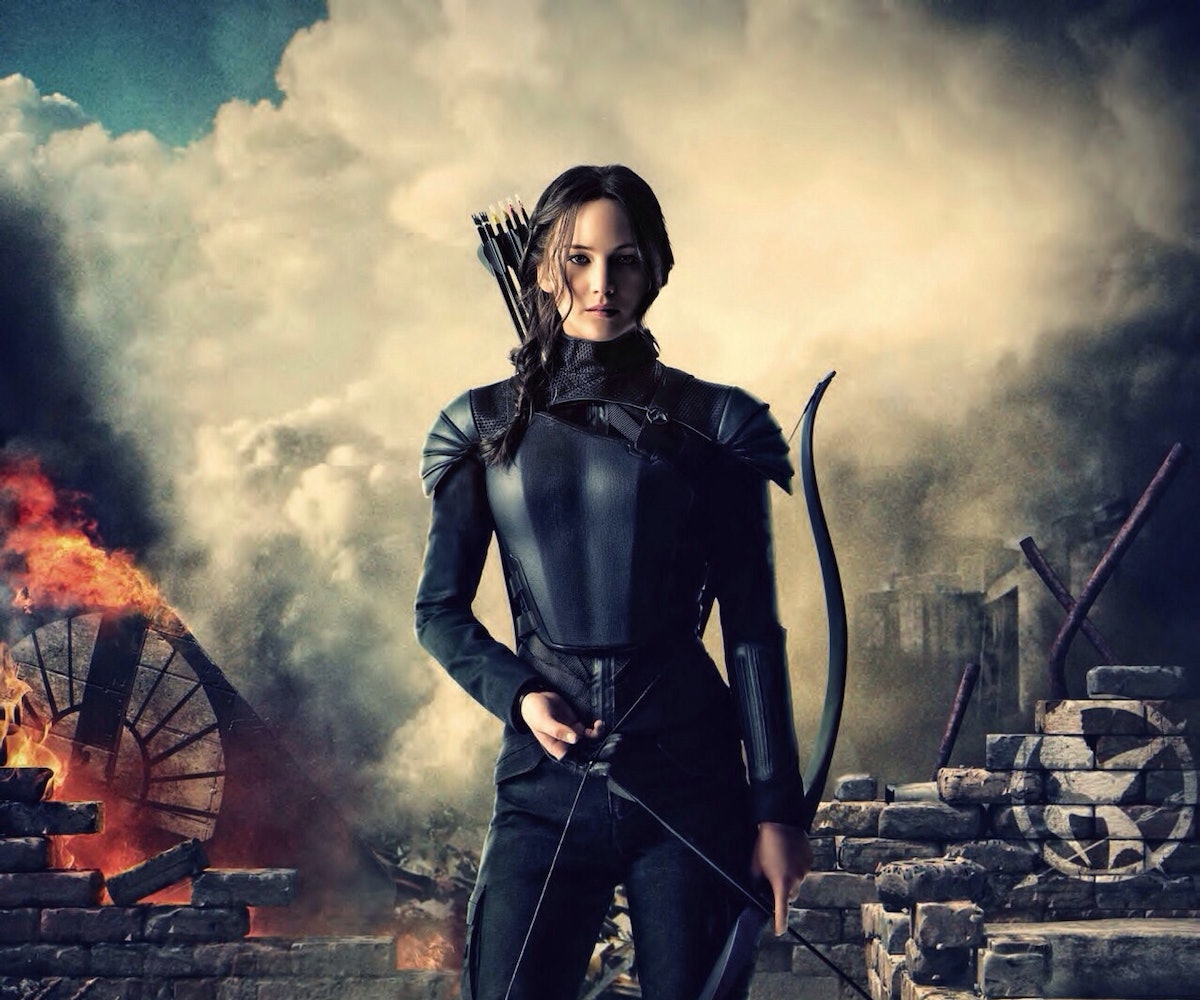 The narrative of Jennifer Lawrence-as-Katniss Everdeen is one that has accompanied nearly every single magazine cover story that Jennifer has ever landed. It goes something like this: “One of the oddities of Jennifer Lawrence’s life right now is that the character that she is most closely associated with— Katniss Everdeen from The Hunger Games—is on a trajectory that is, in many ways, similar to Lawrence’s own.” Or, perhaps: “Like that character, Lawrence went from obscurity to celebrity, and now she must travel far and wide promoting herself and the enterprises that support her.” Most familiarly, it is now, “And inevitably—though she’ll insist that she’s nothing like the film’s hard-done-by survivor—she is Katniss, a role, according to The Hunger Games’ director Gary Ross, that is about “inner strength, a fierce independence, a piece protectiveness—but ultimately a kind of vulnerability.”

Once again, it’s important to mention the similarity. Both came from unassuming backgrounds and rocketed to fame, becoming unwilling pawns who are pinched, preened, and paraded in front of the masses. Both shoot from the hip, doing excellent work unprompted because of their “realness,” and—as the last installment of The Hunger Games series constantly reminds the viewer—their magnetic, organic “effect” on those around them. So then, it’s impossible to watch The Hunger Games: Mockingjay—Part Two and divorce Katniss from Jennifer, the juggernaut star the franchise made into a true household name. Without the vehicle that created her, what’s next for Jennifer Lawrence? How will she fare?

Fortunately for her, Mockingjay—Part Two reminds us that, even surrounded by explosions, incredible costumes, and heavy-hitters like Julianne Moore, the late Phillip Seymour-Hoffman, and Woody Harrelson, Lawrence does just fine. In fact, this might be her best performance in the series since the first installment, where she delighted us all with her wide-eyed innocence. So, once again, the Katniss comparison arises: The first movie had Jen naively charming us all. The second, released alongside alongside the Oscar-winning Silver Linings confronted her with fame, expectations, and the artifice of Hollywood, which, like Katniss, Jennifer took delight in unmasking. The last film features a slightly traumatized Katniss while promoted by a deeply traumatized Lawrence—she had just had her privacy violated in a profound way with the private photo hack, exposing her to the dark underside of celebrity.

So this leads us to the last time we see Katniss, and Lawrence-as-Katniss. More confident, but also more broken than the girl who hit the Games in the first film, Katniss is simply out of fucks to give. Her revolution has so much less to do with her and so much more to do with freedom. Survival (and perhaps Lawrence’s own celebrity?) is just secondary. Katniss came to do what she had to do. But the difference here–and what makes the story compelling—is that, while Lawrence is doing her own victory lap, Katniss has stopped caring whether she lives or dies.

This darkness is what makes Katniss a compelling heroine: She is broken. The film takes out some of the more painful moments of the book, including the bitter, bile-filled relationship and rehab of Katniss and Johanna Mason (both become addicted to a morphine-like substance, and they become close through their shared disdain of, well, everything). And while the production does its best to cast the leading lady in a beautiful light (even moments after battle, her hair is glossy and rich), Lawrence refuses to let us forget that Katniss has endured some very nasty moments. (Katniss has one hell of an ugly, mucous-y cry face, and that’s awesome.)

There is not a lot of triumph at the end of The Hunger Games. This is a story of a war-torn country where children were told to kill each other to survive. The premise, at its core, is horrible. Which is why, for most of the movie, there is a true sense of dread. A shaky camera limits the audience’s perspective of what’s around the corner, there is a sequence that feels straight out of a horror movie, and death touches, well, just about everyone. No one—and this isn’t a sweeping statement—comes out unscathed.

Even the beauty of the original films, which include the robust world-building and pageantry of the Capitol, is dulled or highly suspicious. Fortunately, the film punishes viewers for focusing on the earlier #TeamPeeta vs. #TeamGale tension, for rooting for anyone with a gun, for delighting in the explosions and firefights of war. What was once beautiful, like Effie, and most notably new character Tigris—a disturbingly “altered” Capitol resident who has gotten a little cosmetic-surgery-heavy—is now perverse and strange.

The only place where this message doesn’t carry is in the leads themselves, which is a shame. At the end of the book, Katniss is a shell of herself. Her skin is burned and scarred. She is half deaf. Her shoulder doesn’t work like it once did. Peeta is frail and never fully recovers from his “hijacking,” and is also missing a leg (the film opted against this detail). Sadly, the camera still relished its leading lady, even though Lawrence is able to communicate Katniss’ weariness while her hair and eyeliner does not.

The movie ends sadly, without any sort of grand proclamation, no triumphant third act where the hero redeems the movement she started in a blaze of glory. The punctuation of The Hunger Games bleak message would have been appropriate—if it weren’t for the heavy-handed epilogue, which seems to defang the brutality and unapologetic, warrior-like nature of Miss Everdeen, back-tracking on so much of what we have come to know about her. Without delving into spoilers, the whole thing is visually and tonally askew from the rest of the film. Katniss deserved better—or worse, depending.