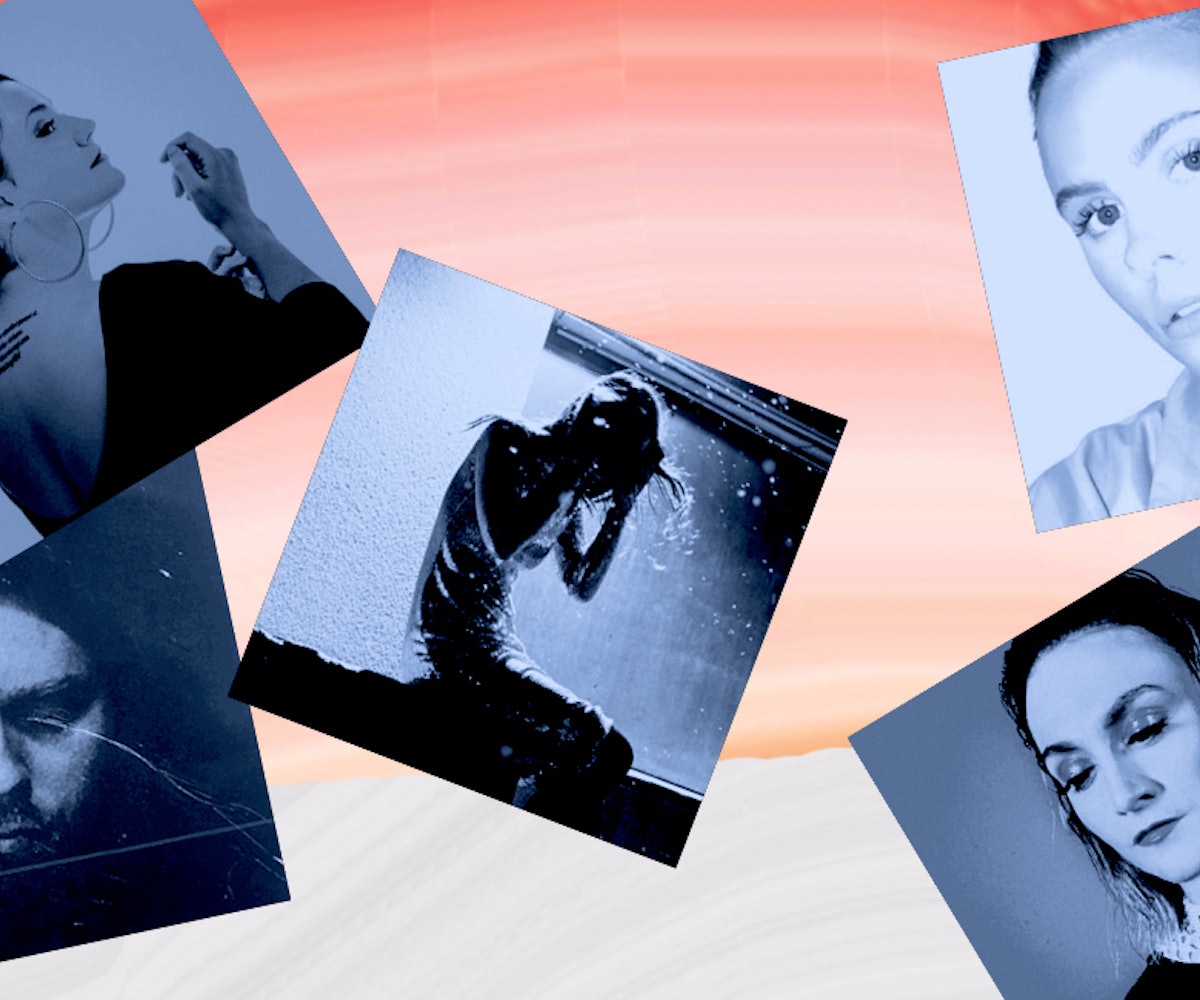 Over the last 18 years, Iceland Airwaves has become a must-see musical event. (Where else can you catch your favorite band, discover a new talent, and hang out in a hot spring on the same day?) It’s also become a major musical hub. What once was isolated to a single airplane hangar now spreads over nearly every bar, venue, and record shop in Reykjavík, and this year even spawned a satellite event in the northern city of Akureyri.

The lineup from year to year is uniformly strong. Notable musicians that graced the Airwaves stage in recent years include international favorites PJ Harvey, Hot Chip, Mumford & Sons, Sigrid, and Warpaint. But the festival also offers a unique look at the home team—including many artists who are not Sigur Rós or Björk, and many of whom have yet to tour extensively outside their native country. The talent runs deep, and the genres are legion. (Did you know that in addition to doing the dreamy ambient thing extremely well, Iceland is a budding hip-hop capital?)

With a slate of shows stretching from Wednesday afternoon to Sunday night, it was difficult to choose our favorites, but here are five of the most notable Icelandic artists we discovered at this year’s edition of Airwaves.

Hildur sings upbeat multilingual pop, effortlessly trilling the kind of choruses you’ll be humming days later. (See the Icelandic-language anthem “Bammbaramm.”) Like one of her heroes, Grimes (who Hildur name checks with glee), there’s a breezy quality to her electronic compositions that almost border on otherworldly. But there’s one superpower the former employee of Björk’s favorite swimming pool (“Tourists would be like, ‘Björk is in a swimming suit next to me!’” she laughs) has yet to unleash on the general public—her degree in Japanese. It has, however, led to more than a few memorable private gigs, playing music for international guests to her country.

“It’s really funny, and I love it because it’s the most niche gig,” she laughs. “For a few years, I was always performing at the Japanese embassy. They were always asking me to perform the Icelandic national anthem and the Japanese national anthem.”

Although early in her solo career (previously she was a member of Rökkurró), Hildur has become a protective force for other women in the industry. When the singer-songwriter’s heartfelt anthem to friendship, “I’ll Walk With You,” netted her an Icelandic Music Award for Best Pop song, she was quickly shot down by a local DJ, who claimed that men must have helped her write the song. But rather than get irrationally mad, the singer got constructive.

“I decided to write a letter to him, that I posted on my Facebook, explaining how wrong he was and basically that this is exactly what’s wrong with the music industry,” she says, calm despite the clearly infuriating memory. “It was such a weird thing to say on the radio! What if a girl who wants to be a musician was listening, and she hears this? Maybe she looks up to me, and then they’re talking like this about me. It crushes her idea that she can do it… This was the perfect opportunity to show people that guys don’t get comments like that. We always have to fight to prove that we are as good as them.”

EinarIndra is okay with contradictions. Then again, perhaps that’s not a surprising revelation coming from one of Iceland’s only didgeridoo players, a position he holds despite never having been to Australia. He’s also quite comfortable with change. When a dramatic shift fate changed the way the former guitar-instrumentalist looked at music, he surprisingly took it in stride.

“At one point, my computer crashed and over three years of songs got erased,” he recalls. “I went with the computer to different guys to try to fix it. One guy put it in his freezer, and I think the hard drive just ended up in his freezer. I never got it back. After that, I wanted to have the songs saved more in my head.”

With that in mind, EinarIndra shifted his music toward the large, dreamy soundscapes, hip-hop beats meeting with washes of melodic synths and his delicate soprano—a family trait that took a while to feel comfortable to him, he notes. His recent EP, Unravel, pushes that blend even further, his forlorn lyrics (a line or two which has been lingering in journals since he was a teenager) evoking loneliness, longing, and a sense of universal desire. It’s a division-free blend that the artist likes quite a bit. Even his creative pseudonym, given to him by a yogi when he first started practicing at the age of 15, evokes a mixed gender vibe.

“This yogi taught me mediation and gave me this name,” he reveals, noting that in Iceland Indra is a woman’s name. “I like the masculine and the feminine coming together. When I perform, I usually perform in a dress. It looks like a sweater. I’ve thought about going full dress because I like people who defy norms, but I haven’t done that yet.”

When Karin Sveinsdóttir entered her high school music competition, singing The xx’s “Shelter” with a friend on piano, she didn’t expect to be discovered. But even though she placed third, she got her Hollywood moment when judge and local legend Logi Pedro (Retro Stefson/Sturla Atlas) asked if she’d like to work with him.

“I was nervous,” she recalls. “I knew him a little bit because my brother is a musician. I went to the studio with him, and we recorded some songs.”

Released on Valentine’s Day, their appropriately named debut single, “Hearts,” features Sveinsdóttir’s sugar-sweet vocals and Pedro’s glitch-filled beats. The track garnered the duo a fair amount of local attention and even resulted in a handful of international gigs and their debut EP, n1. But still a teenager, who signed up to be a musician before she was even sure what that meant, Sveinsdóttir needed a break. She took a year off to work in a vintage shop and figure out what it meant to take care of herself.

“Sometimes when I was playing, I was very nervous,” she admits. “I was having anxiety attacks. I think, at the same time, the music helped me. I’m very shy talking to a big crowd by myself. But when I sing, it’s different. And when I put on another character, it’s different.”

Back making music as a producer and singer rather than a band, Young Karin’s sound has gotten tighter, their new single “Peakin” leaning hard on Iceland’s reputation as an emerging hip-hop capital while still maintaining a pop undercurrent. For the first time, Sveinsdóttir is writing (“little bits,” she says modestly), and in the future, she also hopes to learn more about producing.

“I want to influence younger girls,” she says. “I want them to know that they’re able to do music and stand-up on the stage. I was singing at this opening party of Iceland Airwaves. There were two eight-year-old girls standing in front of me. They were waving, and I was waving back. Even though there are a lot of Icelandic girls in the music industry, we could be more.”

Don’t get her wrong—Una Stef is proud of her debut album Songbook. But the jazz pianist wrinkles her nose slightly at the suggestion it’s an optimistic album.

“I was 15, so most of those songs are heartbreak and in love and heartbreak again,” she laughs, admitting it’s contrary to the way she sees the world. “I almost have ADHD. My mind doesn’t capture the negative things. Sometimes when bad things happen, I wish I could linger on it and get it out of my system. But then I’m on to the next thing. I have no concentration on anything.”

The singer-songwriter’s newer material leans hard on her past, both as the daughter of an Icelandic jazz icon and as someone with a lifelong devotion to Whitney Houston and The Beatles. (Among her collection of tattoos is a tribute to the band’s iconic “Blackbird.”) She’s also trying to explore different forms of music, from deconstructing Beyoncé and recreating parts of Lemonade as jazz music (which—for the record—brings down the house when performed) to singing mantras in yoga classes.

“It happens almost every day that I wonder, How did I get into this?” Stef laughs and offers up a comically half-mumbled mantra. “I had no idea what I was doing! But everyone was feeling it. So yes, I’m in the flow. It was a great experience, and I hope to do it again. But there was a moment when I was walking in, and they were all wearing white, and I wondered how I ended up here. I think, in general, if you’re open, life will take you somewhere. You just have to make your own path. But it’s never going to happen unless you make mistakes.”

So, what would 15-year-old Una think of this new direction?

”She probably would not listen to it,” Stef laughs. “Oh, this sucks! I listened to a lot of Celine Dion. If there wasn’t a high note, I’m wasn’t really interested in. I’m 26 now. It took 10 years, but I’m grown-up.”

In the past, Jófríður Ákadóttir has been Reykjavik’s musical MVP, performing as part of folk act Pascal Pinon (a band she shares with her twin sister), the hip-hop inspired GANGLY, and dream wave-leaning collective Samaris. But for the last two years, she’s been focusing almost exclusively on her solo project, JFDR. To hear the genre-skipping polymath explain it, being a solo artist wasn’t something she initially saw for herself. It was her producer, Shahzad Ismaily, who pushed her in that direction. She also has him to thank for her solo debut Brazil’s delicate, whispery quality, particularly in album opener “White Sun,” which features Ákadóttir singing about her “sins and troubles” and the “island’s intense wonder” over a barely-there synth line and drum machine.

“It was so organic, the whole process,” she recalls of their time in New York’s Figure 8 studios. “Shahzad really taught me to listen for a moment and not try to make something sound perfect. We spent a lot of time with little edits and mixing, but most of the recording happened quite fast. I guess I learned the hard way that perfection is not perfect.”

There’s a through line of restless sadness that runs through the release. Although a traveler at heart, who has to pause to consider where she calls home, Ákadóttir assures she’s in a good place emotionally. Although, like everyone, she has her moments of melancholy. It’s something she strives to be honest about.

“It just comes and goes,” she notes before further elaborating: Music and writing songs for me is about trying to pinpoint exactly what it is in your head and in your life. It’s very therapeutic in that sense. Actually, the songs that I have been writing recently have been touching more on that subject. But there’s definitely some of that on Brazil, and there’s a lot of that in Pascal Pinon. I think it’s an element I come back to for many different reasons… You find consolation in music. I know I’ve done that in the past, and I know that other people do that. That’s why you write something that’s true to you, but you keep it open, so that other people may find some truth in there, as well.