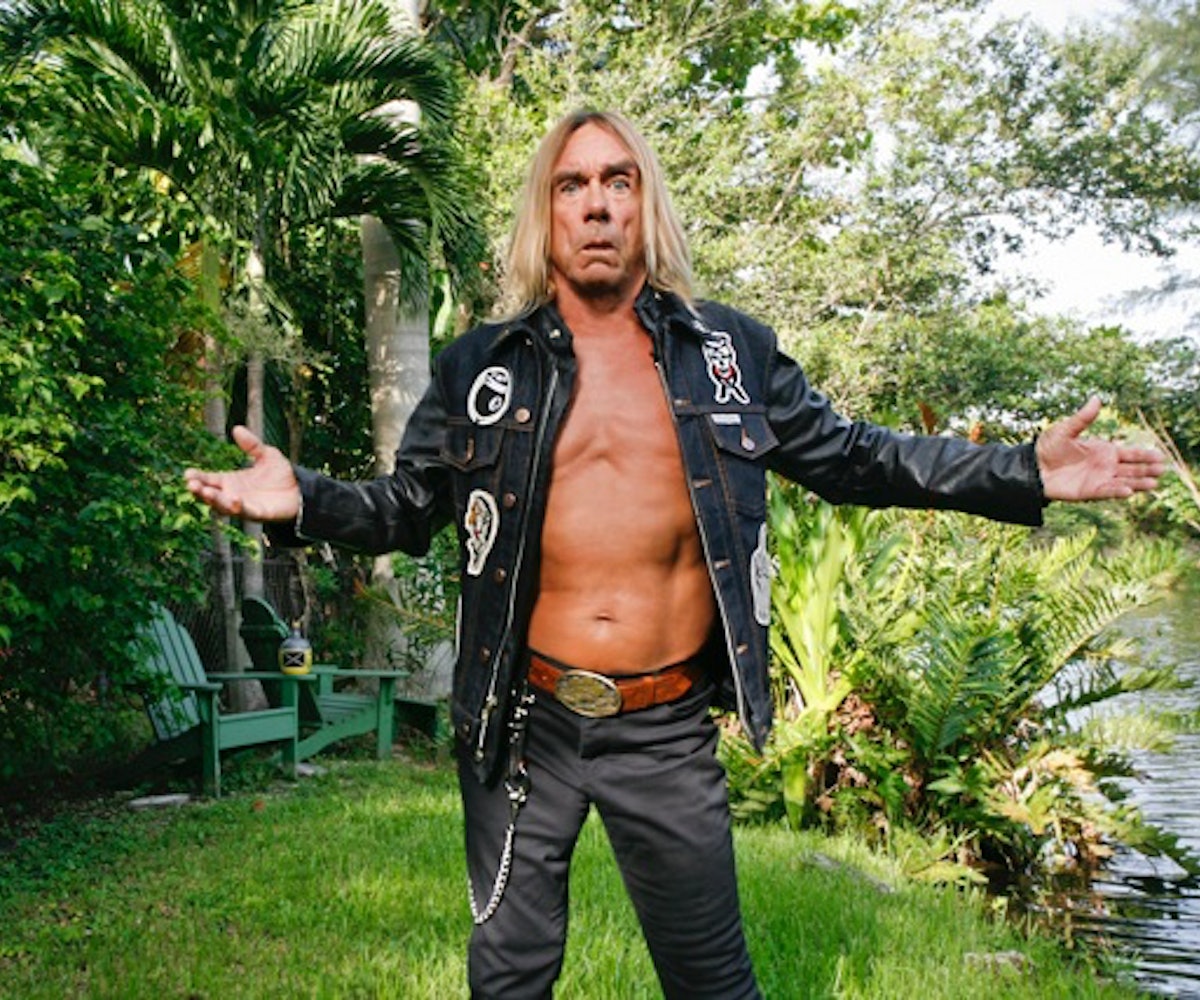 No one knows where proto-punk movement would have landed had it not been for Iggy Pop and his animalistic, infectious stage presence—and perhaps it's all for the best. Along with Joan Jett, The Sex Pistols, The Ramones, and his own band, The Stooges, Pop brought punk to a more mainstream audience, ushering in a time where Americans could veer from the '60s free-love culture to a more rebellious, youth-fueled period of expression. Even now, at 67 years young, his rock n' roll fervor hasn't dwindled throughout the years—along with his affinity for provocation, nudity, and loud music—he's still shirtless, he still has his trademark baritone voice and charm, and he still loves to party. As he approaches fashion design and synth-era music, nothing is off-limits.

"I look at terrible things, like everyone else," says Pop, of his internet use. He lets in a deep sigh. "And then I look at myself and I get really depressed. You know, like, 'You suck dude.'" A few weeks ago, Pop found himself at the forefront of the internet after he delivered the year's BBC Music John Peel lecture, centered around the viability of being an artist in a free music society. Headlines like "When Iggy Pop Can't Live Off His Art, What Chance Do The Rest Have?" and "Iggy Pop Attacks Music Industry" misconstrued the discussion and simultaneously created industry-contained panic and public outrage. "What I said was if I had to live off my record sales, I'd have to tend bar," he clarifies. "Meaning, if I had to live off my record sales, I'd have to do something else, which is true because most of my royalties come from [television, film, corporate licensing, covers, and Greatest Hit compilations]." The point of it all, he explains, is that if your music is special and attracts a certain fan base, other opportunities will come about, like brand sponsorships.

"If I’m gonna pull my pants down, I don’t want any underwear."

One particular venture Pop has his hands on is his new collaboration with Sailor Jerry—a rum/tattoo/clothing brand. “It kind of dripped in a weird way,” he says. “I got an email from Matt [Sorum], who was the drummer in Guns N’ Roses and he said, ‘Some guys are looking for you from something called Sailor Jerry.’” Originally, the lifestyle brand wanted to use The Stooges’ “T.V. Eye” to soundtrack a high-energy endorsement filled with “little savage beasties, tearing shit up.” Pop, impressed with the results, quickly agreed when the Sailor Jerry team asked him to design a capsule fashion collection.

“My big idea was to do underwear,” he winks. “But then I realized that they were going to want me to model everything that I did. I’m 67, I don’t feel like having you take a pic. If I’m gonna pull my pants down, I don’t want any underwear.” With that idea out the window, Pop decided to design a signed, limited-supply vest, patches from the Norman Collins' Flash collection, and a belt. "It was inspired by one particular groupie I used to go with," he smiles, referencing late '70s L.A. and the London punk movement. "The statement is really more social."

As for long-term fashion involvement, Pop admits, "I'm never going to be Karl Lagerfeld, no...But I've done some good things." Extreme ripped jeans, spray-on hair color, body glitter: all iconic trends that the former Stooges frontman helped make popular. "I'm just someone who doesn't mind dicking around with clothes a little bit, that's all," he says. "At the time, my idea was always to be like a casual youth gone wrong, and just let the whole thing melt a little."

After seeing The Doors perform on the University of Michigan campus, Pop founded The Stooges in 1967. The act quickly catapulted the 20-year-old and his bandmates—who, at the time, were Ron and Scott Asheton, plus Dave Alexander—to the forefront of the music scene and they were signed to Elektra Records the following year.

So, what are his thoughts on placing teenagers like Lorde on a high pedestal? "I don’t see any problem with it as long as it’s personally from her to the public," he says. "But the problem with her, what’s going to happen, is the fleas that it’s going to attract privately. She will be befriended and hounded by an amazing castle of celebrity leeches. Evil media weasels and all sorts of people who stir you up. And if she’s a very strong and smart young lady, she can survive and strengthen from that—but it tends to take the fun out of life and make everything really serious."

But, according to Pop, it's not just young artists who are vulnerable. "I notice the smart ones, like The xx, had a problem with their sophomore album. They’d done everything in secret and were really unknown to everybody and they released it and it was

great. But then they tried to duplicate that with their second album—they hid themselves away from everyone in an attic, with black sheets, and you know, wouldn’t communicate, and would just leave the food tray. But that’s not who they were anymore. So it gets to be a problem." The trick, Pop says, is in staying out of the spotlight. "Lana Del Rey," he says. "I think she’s quite good. I noticed that she communicates to a lot of people through the music and videos but you don’t see her around chattering much, so that’s pretty good. That’s smart."

"But the problem with [Lorde], what's going to happen, is the fleas that it's going to attract privately. She will be befriended and hounded by an amazing castle of celebrity leeches."

With 19 studio albums under his belt—the last being 2012's Après—Pop stands as a testament to how punk rock music can still resonate over time, even with the emergence of synth-infused and electronic music. "There’s always been guys stickin’ their chest out playing their big guitar, and they’re out there 20 years later, only it’s their tummy instead of their chest." One thing that will also never wane? The classicism of denim and leather—Pop's making sure of that.