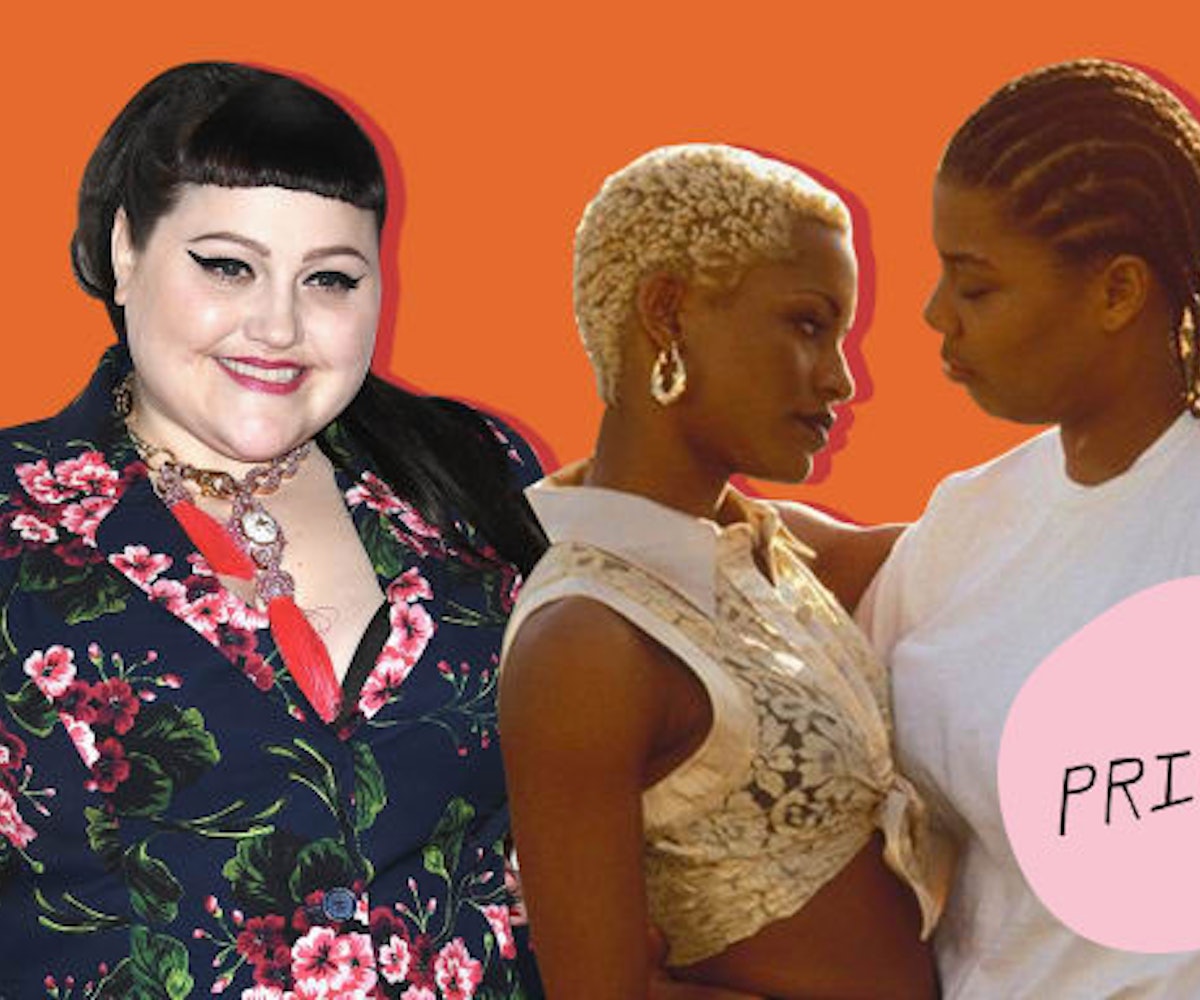 Being a femme can sometimes feel like wearing Harry Potter’s invisibility cloak. Living in a heteronormative world where the gender binary still very much exists, the general public makes a lot of assumptions about someone’s identity based on how they dress, the length of their hair, or the style of shoes on their feet. Femmes, queer women who primarily prefer to dress in a style deemed “feminine” by society, frequently bemoan being mistaken as straight by everyone from straight people to other LGBTQ people.

Growing up femme gave way to a lot of confusion for me, but also a lot of fun, because while there seemed to be very few visible femmes in popular culture or mainstream society, finding someone who represented something close to that idea was exhilarating. As a baby of the ‘80s, going through puberty and all kinds of posturing in the ‘90s, my femme icons weren’t even necessarily queer, but had a kind of different energy about them that resonated with me. While androgynous or more masculine-of-center girls had movie and TV tomboys to turn to, I didn’t necessarily find solidarity with them (just some swoon-worthy crushes; I’m looking at you, Just One of the Guys). And those more “obvious”-looking lesbians and bi women are often the poster children for How to Look Gay, which is exactly why I had an immediate identity crisis upon coming out at age 20. But after assuming the position and wearing band tees and baggy jeans, I slowly started to reintegrate skirts and dresses back into my wardrobe, namely because I realized that being queer and feminine is not mutually exclusive.

Even as a budding baby dyke who learned how to apply eye makeup from issues of YM and Sassy, finding a femme icon took some time. After I found the first one, I began to realize that there had been others. I just hadn’t been able to place the feeling I had about them—the instant kind of camaraderie I’d experienced in seeing them, envying them, sometimes obsessing over them. For me, those early icons were Jennifer Tilly in Bound and Angelina Jolie in Gia. What they have in common is very aesthetically clear—long dark hair, pale and poreless round faces, a penchant for black clothing, bright red lipstick, and, well, other women. But more than what they looked like, they asserted a kind of self-confidence that wasn’t masculine, but instead, completely feminine, dominating a room. It’s a vibe, a spirit, a way of inhabiting the world that is so decidedly femme that I knew I was destined to be one.

“I can always tell if a femme is a lesbian without anyone telling me,” says writer and self-professed femme Zara Barrie. “Queer girl energy is in the way a woman moves. She moves a little more freely, not in an apologetic way like she’s worried about attracting or intimating a man.”

Still, femme energy is totally enigmatic—something only other queer women (and allies privy to the details) can surmise.

“I once heard someone say that the difference between a fashionable person and a ‘fashion icon’ is an icon has a style so distinct you could dress up as her for Halloween,” Barrie says, who notes that out singer and designer Beth Ditto has long been her go-to femme icon. “With that winged eyeliner and porcelain skin and avant-garde goth-punk wardrobe, [Beth] is definitely someone you dress up as for Halloween. She’s what I like to call ‘bad girl chic’—my favorite look.”

Not unlike my icons, Ditto is “all about wild juxtaposition,” Barrie points out. “Ladylike pumps with wild tattoos. Sweet baby doll bangs with a bondage-inspired dress. Being traditionally sexy—but for women, not for men.”

Other queer women prefer a little more traditionally feminine elements in their icons, however, they have that same kind of “I’m dressing for me, other women, and not you, sir” swag. Chicago-based activist Cassandra Avenatti cites Dolly Parton as her fave femme: “She is unabashedly fierce, outspoken, and glamorous, with such an emanating warmth,” Avenatti says. “She champions sex workers, queers, and people experiencing homelessness, all while giving precisely zero fucks about what others think about what she does with her body, and what she dresses it in.”

Stylist Chelsea Fairless names Miss Piggy as her ultimate icon, but says she often doesn’t know someone is femme “unless they roll up with someone who is gender-nonconforming or if they are wearing a T-shirt from [queer, feminist-owned shop] Otherwild.” (Which, for the record, is the only way I’m usually read as queer; the “How Dare You Think I’m Straight” tank is helpful at delivering the message.)

“I wish that there was a telltale signifier of a femme lesbian, but even I often make the assumption that a femme woman is straight,” Fairless says. Which is why so many of us have taken to queering our wardrobes with identifying tops, pins, or pieces of jewelry. And luckily, in the past decade, there have been lots of fashion-forward ways to include nods to not-so-straight sexualities through personal style outside of the go-to rainbow wear or in-your-face slogan Ts (although my DYKE crop top surely helps make the point pretty quickly).

Passing as heterosexual may not sound like such a big deal to some people, but consider how annoying it is to be consistently assumed to be something you are not—something that you feel must be “proven” or detailed in order to be counted. And what we need more than ever as an LGBTQ community, and as minorities who are continuously having to prove not only our worth but our existence (yes, still!), is to show up shouting, “Hi! It’s me! I’m here and queer in heels, get used to it!”

This is especially important in communities where LGBTQ icons are even less visible, like in communities of color. One of the first black femmes I ever remember seeing was Samantha MacLachlan, in a very tiny part in the film Set It Off. Ursula was the original Amber Rose—the short-shorn blonde girlfriend to Queen Latifah’s butch Cleo who put on a pair of fishnets and black bodysuit with both a turtleneck and a thong to give Cleo a lap dance on top of a luxury car. Up until then, I had never seen anything like it—a feminine woman sexually expressing herself for her pleasure and the pleasure of another woman? Was this some kind of sci-fi fantasy?

Sometimes femme icons aren’t even necessarily femmes themselves; like Miss Piggy or Dolly Parton, they might not identify as queer (although there are certainly rumors). Looking back now, I pulled inspiration from icons like Cher from Clueless, who, at the outset, might seem completely straight, but, to me, read as queer for her specific disinterest in dating the boys at her school and always wanting to wear something different from what everyone else was. She took risks, and she was drawn to gay men (just like I was before I realized I was a total lez). Chloë Sevigny and Rosario Dawson in Kids—their skater girl-chic edge inspired me, as did their agency over themselves and their bodies. And then The L Word came around and provided thousands of viewers the chance to drool over Carmen de la Pica Morales—or, if you were like me, wonder where she got such banging black lacy lingerie.

For femmes, it’s not what you wear; it’s how you wear it. There are no rules—and that’s preciously the point. It’s how a piece of clothing or how pieces put together can throw off everything society thinks a lesbian is and how she should look. It’s about how men don’t get to decide what’s sexy or desirable because their opinion literally does not matter. Anita Dolce Vita, the creator of the Hi Femme!, an offshoot of the masculine-of-center style blog Dapper Q, says her work in the queer fashion space has made her "increasingly cognizant about the power of fashion to oppress or to be a tool for liberation,” and that she sees femmes “leading the way” in the movement toward doing away with conventional ideas of womanhood.

“The more we, as a society, cease making assumptions about people’s gender and sexual orientation based on clothing or makeup and the like, the more we become liberated from oppressive binaries and heteropatriarchal beauty standards,” Vita says.

Young femmes today have so many more out queer women to look to for inspo—Amber Heard, Cara Delevingne, Lauren Jauregui, Amandla Stenberg, Sarah Paulson—and they are blessed with the ability to not only recognize them but to hear them openly and proudly talk about their queer identity. And along with women taking more ownership over their feminism and sexuality and the things they do with and put on their bodies, the more power femmes have not to be assumed straight and to become more visible in the world.