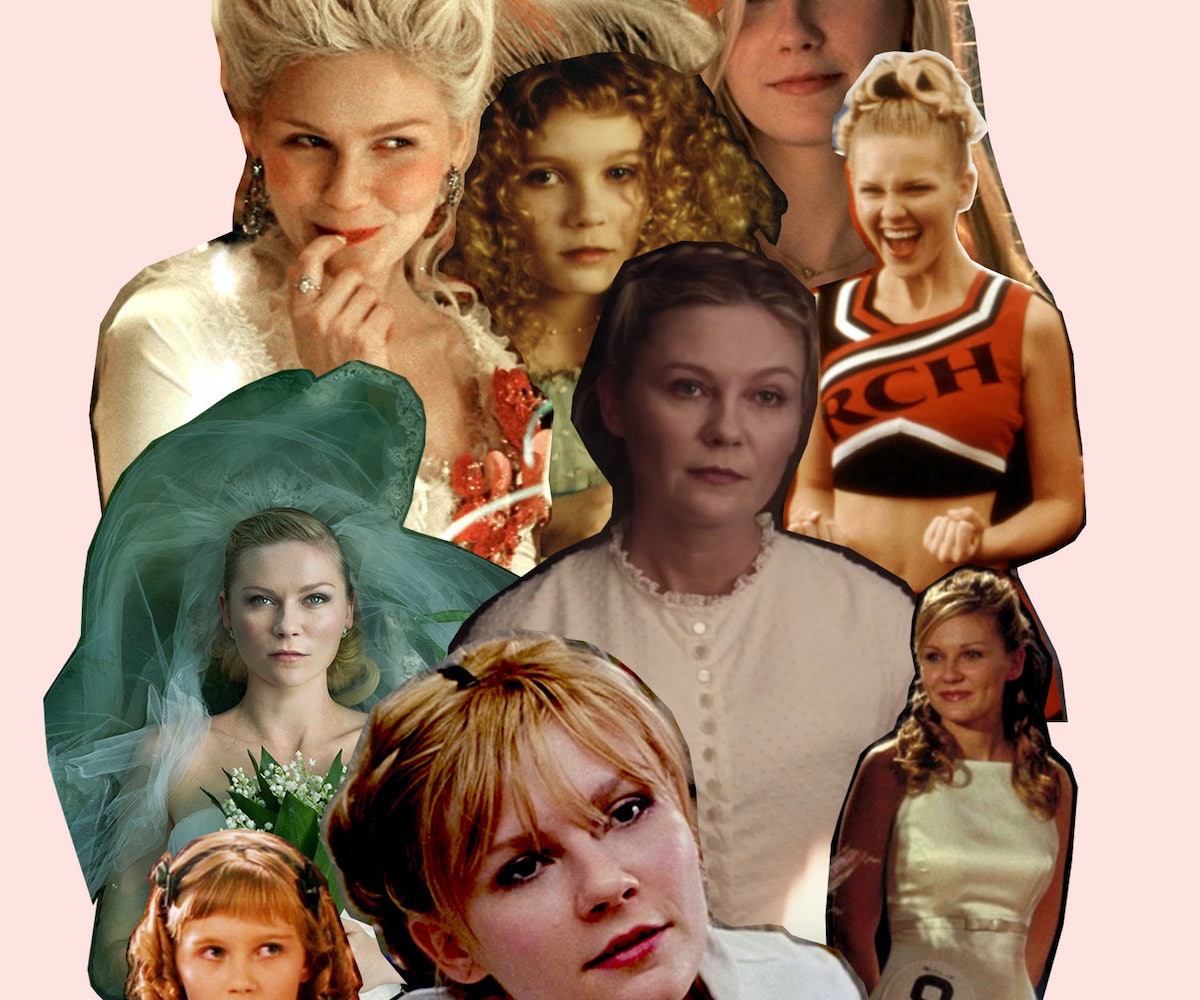 "Because I know things." So speaks Justine, the depressive apocalyptic prophet at the center of Lars Von Trier's film Melancholia. There were many reasons to believe Justine really did "know things" (even though the thing she knows is that the world was about to end), but none more compelling than that Justine was played by Kirsten Dunst, and it's hard not to believe that Kirsten Dunst is someone who knows things.

Now 35 years old, Dunst has been in the public eye for well over 20 years, first establishing her star power with a memorable turn as Claudia, a young blood-thirsty vampire in 1994's Tom Cruise- and Brad Pitt-starring Interview with the Vampire. Since then, Dunst has built one of the most fascinating and varied Hollywood careers of any actor in her generation by refusing to limit herself to a genre, demonstrating facility with comedy and tragedy alike, working with visionary auteurs, and seeking out the kind of challenging roles which would undoubtedly have earned a male actor untold critical accolades, but which don't prevent Dunst from being described in profile after profile for her blonde and dimpled good looks, rather than her clear intelligence and wild talent.

The long-established, though still tiresomely lazy journalistic trope of reducing an actress to the parts of her sum, has often been used in profiles of Dunst, and is only worth mentioning here because of how ineffective it is as a means of describing her. In many ways, Dunst's physicality would seem to be the most uncomplicated thing about her, an obvious contributor to her fame; she has markers of the type of beauty we've all been taught since birth to think of as desirable—the blonde hair, the clear skin, the high cheekbones, the blue eyes. It seems, then, that Dunst's appearance means she was born to embody the cheerleader, the beauty pageant contestant, the ditzy high schooler, the beautiful girl next door, the superhero's girlfriend, the blushing bride.

And Dunst has played all of these things, but much in the same way that her physicality defies easy categorization (and thus easy dismissal), thanks to eyes that have an uncanny ability to narrow and lengthen like a cat's as it prepares to pounce and a smile that reveals teeth that remind you their purpose is to bite, every one of Dunst's roles subverts the commonly held idea of whatever archetype she's portraying. Thus, the cheerleader is manically competitive but ultimately compassionate, the beauty pageant contestant wants nothing more than to help others succeed, the ditzy high schooler manages to dethrone the most powerful man in America, the beautiful girl next door is suicidal, the superhero's girlfriend has a career she's pursuing, and the blushing bride accurately predicts the end of the world. Perhaps it's precisely because audiences aren't used to seeing someone who looks like Dunst play such subversive roles that she's uniquely able to constantly upend any and all of our expectations. More than that, though, Dunst's refusal to do what might otherwise be expected of her, makes it impossible for Hollywood to do what it likes to do with actresses, namely mark them as a type so that they can be more easily digestible—all the better to eventually chew them up and spit them out.

Actresses who have careers as long as Dunst's usually go on one of two paths, toward mega fame and blockbuster franchise movies or toward indie stardom. Dunst is notable for having dabbled in both those paths, but ultimately choosing to be agnostic when it comes to determining what her own inimitable path would be. She has not limited herself only to indie films, acting in big-budget movies (albeit in secondary roles) like Hidden Figures, and she has also worked in TV, on the second season of ultra-dark FX drama Fargo. Her disparate career choices are not dissimilar to those of Nicole Kidman's (with whom Dunst next appears in Sofia Coppola's The Beguiled), but there are differences. Perhaps the main one is that Kidman's highly varied roles, for which she has won much acclaim, often feel like they are chosen because the actress feels like she still has something to prove—as if she is still trying to escape the shadow of her first husband, Tom Cruise. This has led to some fascinating work from Kidman, but it also led to a somewhat scattershot resume, one notable not just because it has as many hits as it does misses, but because of, thanks to how prolific her career is, just how many misses there are—a lot.

While Dunst certainly has her own bombs (hello, Wimbledon), they feel different because they feel reflective of a quality of Dunst's that is rare in Hollywood: She acts like she has nothing to prove. Perhaps because Dunst has been in the industry for so long, or perhaps because she experienced her own difficulties with life in the public eye, but Dunst tends to go for projects which are unified because they all feature Dunst in roles that are quietly revelatory. They all challenge our perceptions of what an actress who looks like Dunst should be doing. They all make it clear that Dunst won't allow audiences to feel like they know her just because of what she looks like and that, in fact, it isn't the audiences who know anything; they're in the dark, while she is in the light.

Because so much like Justine, Dunst just knows things. She knows how a slanted sideways glance can convey an interior world rich with texture and she knows how a simple lift of an eyebrow can demonstrate a world-weariness that few others can understand. She knows that we have an idea of what the best actor of a generation is supposed to be like and look like, and she knows that this idea is short-sighted and doesn't take into account all the multifaceted, many-pathed ways there are to get to the truth, unfamiliar though it may seem at first. Dunst knows things, and by watching her, we grow to know things, too.