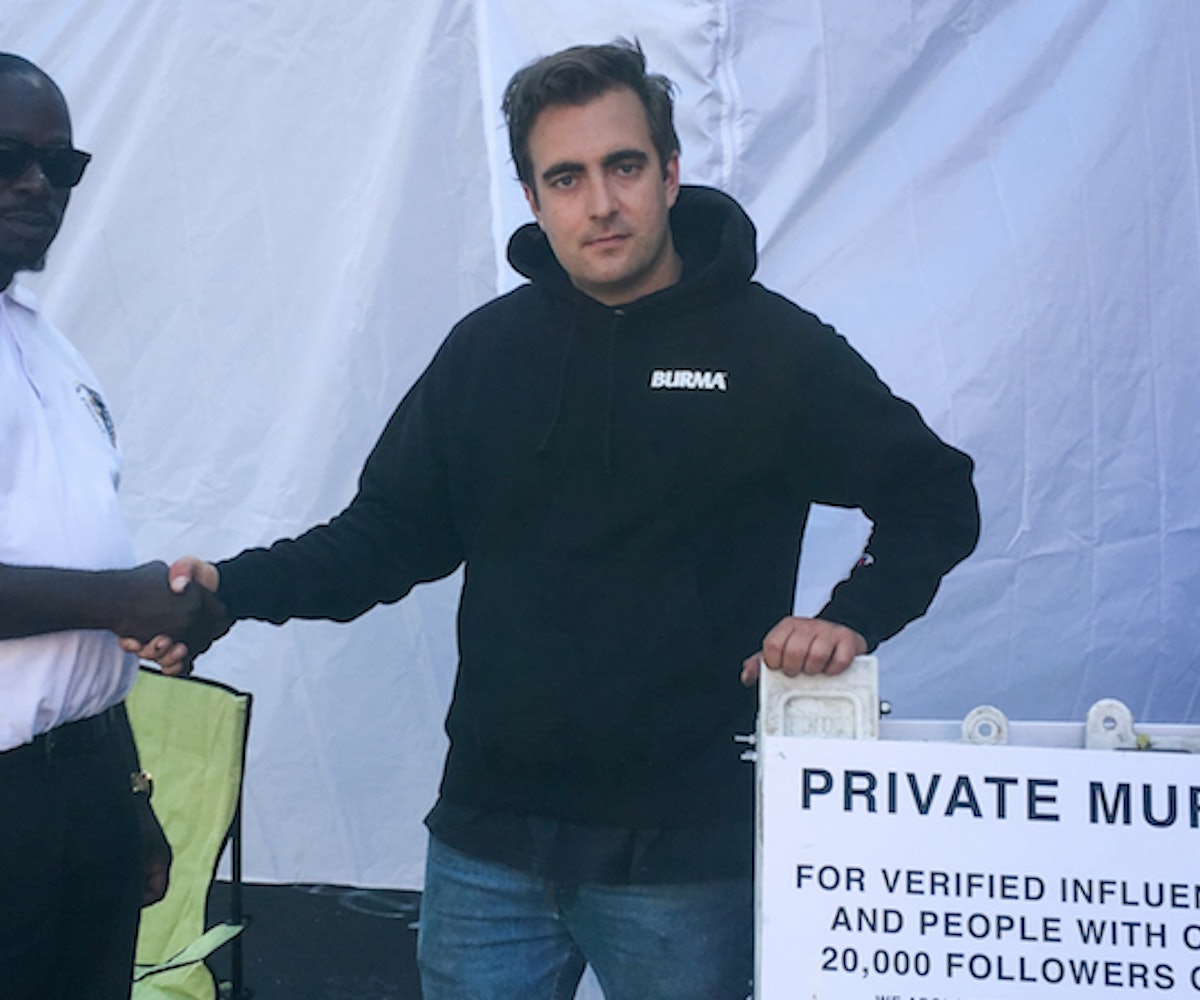 Earlier this week, news of an "influencers only" mural located in Los Angeles ripped through social media, enraging some and amusing others as those with verified checkmarks and/or over 20,000 followers began posting photos in front of it. However, it wasn't long until people began piecing the pieces together, eventually figuring out that it was actually a marketing campaign for a new show called Like and Subscribe.

The brainchild of Jack Wagner (aka @versace_tamagotchi), Like and Subscribe is a forthcoming satirical series on Verizon's video streaming service, go90. Set to air in early July, the show is a spoof on influencer culture and an exploration into an industry that Wagner sees as absurdist and somewhat exploitative. Starring Dillon Francis as a talent manager who attempts to capitalize on the viral influencer boom by continually signing ruckus-causing clients, he soon creates what Wagner describes as a "social media halfway house" in order to keep his problematic clients under control.

Directed by The Dads and with writers including comedian Brandon Wardell, former SNL writer Nick Rutherford, and Adult Swim's Cam Tang, Like and Subscribe is a verifiable who's who of some of the internet's funniest people (but don't call them influencers). But even they found it a challenge to keep up with the debased world of social media stars. Read our Q&A with Wagner to find out more about the show and check out the first trailer for Like and Subscribe, below.

I guess the easiest place to start is by talking about the show.

The show is about influencers and influencer culture. That was something dear to my heart that I really wanted to do something about.

As an influencer yourself?

I'd say I'm influencer-adjacent... I'm self-aware enough to joke about it. But at the same time, I say influencer-adjacent because I feel like true influencers are ones who have a manager and they're doing ads and making a living off of social media. Which would be tight. Like, give me that ad money, right? But yes, I'm in the world, so I do know the inner workings.

Was the mural concept your brainchild?

Yeah. I think I thought of it while we were shooting the show. I mean, the mural really was almost like an episode of the show in real life. To have it play out in reality and see how the world interacts with it [was crazy]. Because the show is a satire of social media and influencer culture, and just the entertainment industry, as well. So the mural... I would rather show people what the show is like than tell them.

But it's a narrative, serial show. So it's seven episodes. The basic plot is that it's about a powerful Hollywood manager, who's played by Dillon Francis, and his company that was signing all sorts of viral stars in the moment of their fame—which is something that happens now. It's just a reality. Some kid goes viral on a pogo stick, suddenly he has a publicist and an agent, and they're trying to figure out what to do with him, eventually realizing, "Oh, maybe he can only do that one thing once."

So the plot is he had signed all these people, just blindly, mostly just to say that he signed them. And then, of course, all these people are just existing in the world, and eventually it comes down and gets them in trouble. All of these people at once are just getting in too much trouble, and he has to do something about it. So he's inspired by another influencer to come up with a team to just keep them all together—out of the way, without getting in trouble—kind of like a social media halfway house.

What sort of hole in the market were you trying to fill with this show?

Nobody's really done a show about influencers yet that worked, I think. People have tried to, but it's very hard to do, and it was hard for us as well. The biggest problem was that I would [try to write these] cutting spoofs of real people—that you would look at and be like, "Oh that's supposed to be so and so"—but it ended up being more like people that don't really exist, as archetypes of these characters. In the process of writing this, I would write an episode where something would happen that I thought as so absurd, so ridiculous, [as] a way to satire something, but then a couple weeks later, it would happen in real life. Or something similar. Or something way more extreme than what I wrote. It would just ruin it, and I would have to go back and rewrite the episode.

Imagine trying to write a Logan Paul-type character, and then Logan Paul poses with a dead body. If you told me that in the process of writing, I would've been like, "This is too ridiculous. We need to be close to reality here."

These characters, I would start to get specific with them, or I started getting specific, but then things changed and everything. So a lot of people are hybrids [of real social media stars you may be able to recognize].

So this is a satire, and satire at its core is a critique. What other big messages do you hope that this show gets across?

What's funny is that [Like and Subscribe is just] completely absurd. I would say the show truly is just like a comedy. This is not some kind of Black Mirror [thing]. People aren't going to be like, "Whoa” [and freaked out].

I guess I haven't really thought about [the message] that much…. We just live in an absurd world. I think if there's anybody that were to watch this and have to think about what they do, it would be people in the industry. If anything, there's an overarching [theme throughout the show] about the vultures swarming on anybody who gets over a thousand likes on something. Like, “Oh, how do we make money off this person?”

That said, when this tweet surfaced yesterday, people were so pissed. Probably because it felt like a totally plausible, real thing.

I think the reactions were so funny. I wondered how many people [would] get it and appreciate the true hilarity of it. Inherently to me, it's funny, but there's a deep layer that I'm laughing at. I've seen a lot of influencers virtue signaling about how disgusting this is. People who 100 percent take advantage of [similar stuff] anyway. And there's just some people I'm surprised even care about it. They're patting themselves on the back for being mad about it. It's very funny to see the outrage.

Who do you think was most upset by it?

Like random influencer types. There's a genre of people that are verified for some vague reason, and you're not quite sure why... Like the type of people who would show up at a Sprite Lollapalooza influencer house event—the people who go to marketing events as an influencer.

Who painted the mural?

He's not putting his name on it, as of now. But he'll take credit eventually. I'm sure... It's not similar to what he normally does.

No. I wish. A funny thing that I've been doing to a lot of people who have been interviewing me is I've made defensive comments saying that, if Banksy were alive today, he would do the same thing. And nobody has corrected me on it. I hope people run with it.

I hope you're ready for the backlash—for all your trolling.

I mean, that's my favorite type of thing. [But] I think of trolling as just trying to make everyone mad on purpose, you know? I enjoy things where if the people who don't get it all the way get mad, it's funnier for the people who do get it. Which is what this mural is. A lot of people just saw it and were like, "Oh this is hilarious no matter what. Real or not, it's very funny." And the entire thing was really funny. It was funny to see people take a stance against it, especially in the world we live in today. Of all things to get mad at. That was the best part of it to me—is people are mad about it being exclusive and stuff. But you could see the mural. It's really bad. So I don't know why anybody would want to take a picture in the first place. That's the funniest part of all of it to me. Who would want to take a picture of this mural if it was public? Nobody. You know? The whole mural selfie culture is really funny anyway.

Everything is so fucking absurd. I can't.

[For this one video interview], I did it kind of in character. I praised influencers. I said that they were the hardest working people and I said that Pablo Picasso picks the finest canvas for his work—we're just showcasing this on the finest social canvases. But I feel like anybody with half a brain could piece it together. Also, in the interview, I'm wearing a Criss Angel Mindfreak shirt...

NEXT UP
The Art Issue 2022
From Renaissance To Gemini Rights: The Stories Behind 2022's Best Album Covers
Entertainment
Everything We Know About SZA's New Album
Entertainment
Caroline Polachek Announces Album ‘Desire, I Want To Turn Into You’
Entertainment
RM's "Yun" & 9 Other New Songs Out This Week