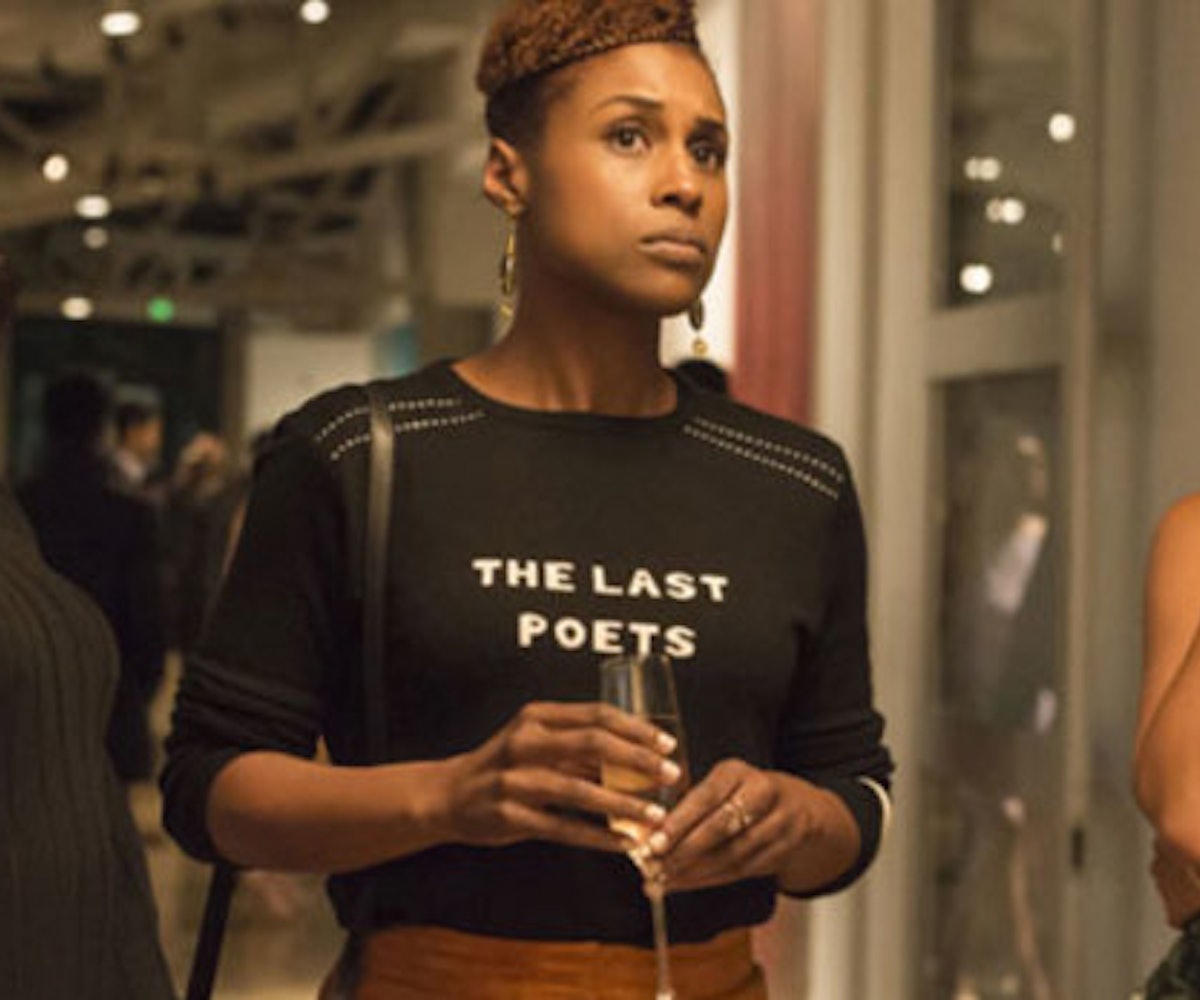 When music appears on TV it typically plays the supporting role. In period pieces it can be used to establish historical accuracy as when the bouncy synth in Corey Hart’s 1984 classic “Sunglasses at Night” played quietly in the background of hearthrob Steve’s car during a scene from last year’s nostalgic summer hit Stranger Things to underscore—if the coiffed hair and letterman jackets didn’t already—that it was an '80s show. Other shows like Fox comedy Bob’s Burgers have made music part of their joke structure; each episode’s outro is reserved for musical recaps of that episode’s theme. Donald Glover’s FX hit Atlanta evokes its namesake city with shout-outs to Atlanta-specific bites like lemon pepper chicken wings and a soundtrack that leans heavily on Southern rappers. On HBO’s Insecure, however, music serves a different purpose. Over the course of its two seasons the show’s soundtrack has often lead or landed the story of the episode and has become its very own character in the process.

A group of Redditors recently discovered that Rae’s show has been sneaking Frank Ocean lyrics into every episode of its second season. In the penultimate episode of this season, “Hella Disrespectful,” Issa apologizes to a coworker she’s been at odds with and offers the explanation that she’s been “lost in the heat of it all.” The quote is a line from Frank’s song “Lost” which appeared on his debut album Channel Orange. Lyrics from Ocean’s latest album Blonde and his first mixtape Nostalgia, Ultra have previously been peppered into scenes throwing shade or expressing disbelief and lust. Though it appears the writers room is playing a game with these lyrical drops, an examination of the musical choices on the show reveals that this interplay between music and the show’s script has actually been part of the magic of the show since it first aired.

Sometimes this connection is used to amplify emotion as when TT the Artist & Mighty Mark’s “Beefin” loudly blares during a scene when Issa furiously texts her friend Molly. Issa has just learned her ex-boyfriend Lawrence—who recently blocked her on Facebook, a modern-day act of war—is going to be at a dinner party she’s set to attend. The song lyrics about “being sick and tired of the bullshit” perfectly capture her pissed off mood. Even without the music, her stoic face is belied by angry typing fingers, but with it the emotional crux of the teleplay becomes reinforced by the song and vice versa. In a piece for BuzzFeed last year, writer Hannah Giorgis artfully teased out this link between script and score by analyzing a pre-breakup scene from the first season’s finale (“Broken as F**k”) where Moses Sumney’s “Plastic” accompanies a scene in which a guilt-ridden Issa who’s recently confessed to cheating on her boyfriend is now unable to reach him: “As the intractability of Lawrence’s absence and anger sinks in, a voice begins to sing above gentle chords. ‘Can I tell you a secret?’ it asks, high and angelic. ‘My wings are made of plastic.’ As the scene moves from Issa staring speechless at the bathroom mirror where she once found her greatest creative freedom to an eerily beautiful shot of the Los Angeles landscape, the final line of the chorus reverberates: ‘…and so am I.’” Giorgis remarks on the way the song appears to be narrating Issa’s inner thoughts, the vulnerability and ache in Sumney’s voice finding its complementary counterpart in the wave of emotional disintegration washing over Issa’s face.

The show, which is set in Los Angeles, often nods at the city by pulling tracks from SoCal-native artists like Kendrick Lamar, Anderson .Paak, and The Internet. In an interview with Complex, music supervisor Kier Lehman confirms it was a conscious decision to have West Coast sounds act as a geo pin for the show, authenticating it as a hella L.A. project. Equally deliberate is the decision to stack the soundtrack with lots of of hip hop and R&B—black musical genres for a show about black L.A. While the show does this to create an authentic and relatable black experience, it doesn’t settle for the familiar, often distinguishing itself by using this music in unexpected ways. In an early season one episode (“Thirsty as F**k”), the recurring use of ERIMAJ’s “Conflict of A Man”—whose lyrics follow a contemplative man as he goes back and forth about a relationship he can’t let go of—first while Lawrence is running and again while he’s driving later in the episode—turns the song into a teaser trailer for the Lawrence and Issa relationship storyline. In another episode, Molly finds herself cooking a meal from Chrissy Teigen’s best-selling cookbook for her insta-boyfriend Jared while wearing a colorful patterned apron like a smitten rom-com character as St.Beauty’s wavy neo-R&B release “Holographic Lover” plays. “Love’s got me in a daze/ Crazy how it makes me behave,” St.Beauty coos as the viewer realizes the show isn’t just using the song as mood music but also as a reminder about the ephemerality of honeymoon periods, a tragic lesson Molly would learn soon after.

This season coincided with the release of SZA’s hotly-anticipated debut album CTRL. Reviews of the album are quick to point out one of CTRL’s central narratives is that of a woman who is riddled with self-doubt and attempting to own her insecurities. Reviewer Kiana Fitzgerald writes, “CTRL is an introverted girl’s Lisa Frank notebook filled with scribbles and doodles about the life she’s lived and the life she wants to live.”

Issa Rae, who owes her career launch to her popular web series Awkward Black Girl, knows all about the introvert life. Hers is a personality geared toward self-reflection and on the show this manifests in mirror debates with herself or in her infamous original raps (Google “Broken Pussy”). These musical interludes aren’t just comedic relief though, they are a vital part of Issa’s character-building; Rae told WIRED the writers would knowingly leave gaps in the script for her to include them. Lehman says he used the show’s partnership with RCA to gain early access to SZA’s album and that upon hearing it, Rae and frequent collaborator Melina Matsoukas instantly felt how well season two of their show would pair with the narrative of CTRL. In the second episode of this season, “Hella Questions,” Issa stalks her ex’s new woman and it solidifies something she hadn’t yet accepted: Their relationship was over. She then returns home, enters her bedroom, and finally begins to clear space in the closet she used to share with him as one of the tracks from CTRL, “Supermodel,” plays in the background. The lyrics, “I'm writing this letter to let you know/ I'm really leaving/ And no, I'm not keeping your shit / Heard you got some new homies/ Got some new hobbies/ Even a new hoe too,” practically act as set direction for the character. After examining her work with the closet Issa finds her way to the bed and moves her pillow from its place on one side of the bed into the middle of the bed, her bed, and sighs. Shortly after the episode aired SZA tweeted at Rae, “Thank u for bringing color and dimension to a feeling I couldn't illustrate.”

In the official music video for “Supermodel” SZA finds herself literally face to face with her insecurities. It opens with SZA confronting herself in a mirror in whose reflection she sees a man laughing at her. In the corner of the room she sees young black girls in fairy wings giggling and calling to her. They draw her away from the mirror and onto a new path where they blow gold dust onto her and SZA’s confidence builds until she turns the path into a catwalk, strutting half-naked in black panties emblazoned with the name of her album. When the man from the mirror re-appears to block her way (still laughing) a visual effect makes it seem as though his laughter is sucking up the gold dust in the air, keeping it from adorning her. By the video’s end though, the man is brought to his knees and SZA blows fake heat off of her finger gun before she walks off victorious, glowing. When the artist previewed her album with Entertainment Weekly she explained, “I think I spent a lot of time hiding vocally, being super low and being super metaphorical because I was scared to get ugly and deal with everything.” The video gets at the heart of this ugliness and stares it down unblinking. “I welcome fear now,” SZA continues, “it’s my job to not be no punk.”

When Issa confronts herself in the mirror she is also chasing after ugly inner demons: her fear of not measuring up, her anger at being mistreated by the men in her life. SZA and Issa are two insecure women who are using their self-awareness to work through their issues and reclaim their time and space. What Insecure’s past and present musical consultants, Kier Lehman, Solange Knowles, and Raphael Saadiq, get right about the power of music is how well it brings home these ideas. Rae has mentioned one of the benefits of having Grammy nominated musicians helping to curate her show’s soundtrack is cashing in on their relationships with others in the business—Solange counts Moses Sumney and Kelela as friends and both artists have been featured on the show. But the true benefit to the show comes from the way these artist-consultants leverage their intimate knowledge of one medium, music, to add depth to another, TV.

One of the most noteworthy upgrades of the Peak TV era is that musical supervision has become an artform—this year for the first time in its nearly 70-year history the Emmys even created a category for it. Saadiq recently guested on an episode of “Wine Down,” a post-show discussion series hosted by Rae, and she told him that his compositions for the show “affect the mood and tell the audience how to feel.” The Insecure team’s insistence upon up-and-coming (mostly) black artists for a show about young black people trying to make it happen for themselves is a neat storytelling tactic that capitalizes on the way the emotions the musicians and TV characters are cycling through—heartbreak, confusion, scorn—bleed into one another and help sell the show’s heavier emotional arcs. Insecure is one of HBO’s most social shows. Every Sunday Twitter erupts into commentary with a fervor generally reserved for sports teams—after the two leads broke up fans quickly divided themselves into sides, Team Issa and Team Lawrence. Thousands upon thousands of tweets are posted about the blunders and hero moments of each of the show’s characters with even the cast weighing in. Around this time Rae also releases the episode’s soundtrack as part of a weekly-updated master Spotify playlist for the season. Last month she announced Insecure would be getting an official 23-song soundtrack featuring music from the show in addition to new music from SZA, and five original songs from Issa Rae herself. The much-anticipated album, released September 8th, is a major nod to music’s role in shaping the identity of the show that all but formalizes music’s character status.