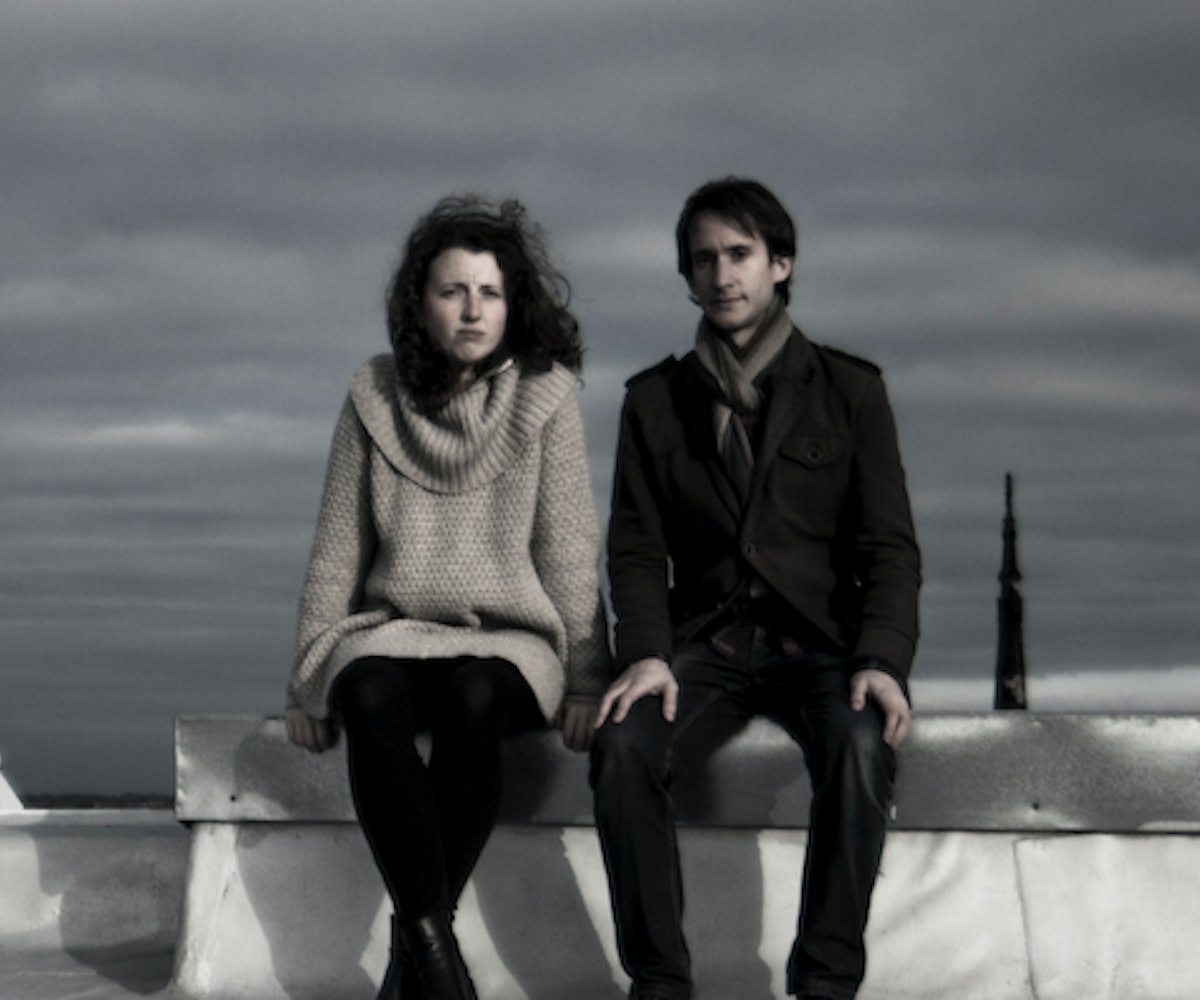 I am a failed cellist. Somewhere during my teenage years, I traded Bach for Belle and Sebastian, performance dresses for band t-shirts and Converse, and never looked back. But now, in the age of the playlist, this “pick your tribe" style of music appreciation seems antiquated.

This is particularly the case in Iceland, where the country's classical and pop luminaries have roots in the hardcore and metal scenes—and vice versa. (Think: Ólafur Arnalds and Sigur Rós.) It's here in Reykjavík, on the coldest weekend in January, that I rediscovered a bit of my teenage self at Myrkir Músíkdagar (in English, that means "darkest days"). At its core, the festival, located at the Harpa Opera House and surrounding smaller venues, is dedicated to showcasing the best in upcoming instrumental, experimental, and modern classical music.

Don't let those genre descriptions intimidate you. As composer Bára Gísladóttir helpfully tells me, the best way to start any exploration into the musical unknown is to stop assuming that words like "classical" or "instrumental" translate to inaccessible or hard to understand.

“I feel like it's about opening up," she offers. “We are so occupied with what is art, what is music, what is culture? Who cares?! Everything is about an experience."

It's true, over the course of three days, Myrkir Músíkdagar proved to be much different than the stuffy music halls of my youth. Sopranos growled like punks, clarinetists looped themselves into abstraction, and—in a moment that proved teenagers really are the coolest—the Reykjavík Youth Symphony took over the lobby of Harpa, performing an interactive piece in which a musical drone was passed between orchestra members positioned across all three levels of the venue.

Below, we highlight five of the instrumental scene's most exciting performers. From a future film luminary to a member of Björk's brass section gone rogue, here are the five standout artists and composers on the scene.

For many who dream of becoming a full-time musician, aspirations come with a backup plan in tow. But for San Diego-based composer Bryan Jacobs, who originally envisioned a career in agriculture, making music felt like the safer of his two options.

“At that time I figured if I’m going to be on a farm and spend as much time by myself as I want to, I want something to entertain myself,” he says. “Someone has to make the food we eat. And maybe I will someday. But I got more and more interested in some musical projects and that just seemed more realistic.”

Although Passepartout Duo was given the honor of playing his frenetic score “Piano+Electronics” at Myrkir Músíkdagar, Jacobs also performs live with his Ensemble Pamplemousse. In the past, the outside-the-box collective has produced a series of creative concerts that has even included a symphony played on four car horns. Still, Jacobs promises that none of his creations are created for the sake of being obtuse. He firmly believes anyone can appreciate the emotion behind music—even when it’s difficult to describe.

“I’ve never found an elevator pitch that works because everyone’s reference point is totally different,” he muses. “Most everyone I’ve met in the world has a connection to music. It has meant a lot to them at least in some point in their life… I want to see if anything I do has to do with what you like. Usually, it does somewhere. Sometimes people understand it totally right away.”

Although a violinist and double bassist since an early age, it took showing up unprepared for an Icelandic Youth Symphony Orchestra rehearsal for Bára Gísladóttir to truly understand the power of her craft.

“We were doing Romeo and Juliet,” she recalls. “We started out with this movement in the piece called ‘Montague and Capulet.’ It starts with this really loud brass scale and really loud percussion. While this is happening, the strings are doing this [very soft] chord that is inaudible while the others are playing. And then suddenly, the loud part of the orchestra exits and you hear this wonderful minor chord. I think it was this moment. Why are we supposed to be so quiet? This is so weird and everyone is so loud! It was this magical moment when I knew that I would be in music forever.”

Since then, the Iceland-born, Copenhagen-based composer has taken a less traditional turn, her conceptual compositions veering from orchestral structure to play with dissidence and ambient tones. This has included her recent album, Mass For Some (her take on Latin Catholic mass—even though she assures she’s not out to mock the intuition), and her Myrkir Músíkdagar-premiered piece, “Seven Heavens (of Different Heights (and Depths),” in which Gísladóttir experiments with layers and textures, blending them into a divine cacophony. It’s an exploration that she hopes other female and female-identifying musicians won’t be afraid to attempt.

“I feel that things are changing thanks to all the fantastic women who are fighting to have a space in the contemporary music scene, as well as every other scene,” Gísladóttir notes. “If you’re not familiar with music history, when you think of a composer, you think of a really old white guy. I think that is a huge problem. If women aren’t featured in concerts, nothing is going to change. Especially in the contemporary music scene. A lot of people think they’re not supposed to go to it. They don’t belong to the class that belongs to those sorts of concerts. That's why people don’t become familiar with what this world is. It’s super closed-off. But it’s changing.”

In another leg of her career, Bergrún Snæbjörnsdóttir was a member of both Björk's and Sigur Rós’ touring brass sections. But as of late, the Icelandic artist has been focusing on composing—and breaking from the traditions that came before her.

“I always feel like an odd one out,” she confesses. “I don’t really feel like I’m building on anything in particular that has been done before. Instead, I go for whatever it is I want to do, inspired by these people I’ve come to know in bands who just do it without worrying about what came before… I work with visual elements and mostly acoustic instruments. But I also do sound installation. Audio-visual installations. It’s almost like hallucinations—in broad daylight. I see these things that I try to put in front of myself and in front of an audience. It’s hard to explain.”

To keep things fresh, Snæbjörnsdóttir writes in a series of blocks, which she calls systems. Rather than moving from one measure to the next, performers are given the freedom to mix up the blocks. Which means even when presenting interactive video performances, like “BAE (Before Anyone Else)” which Stirni Ensemble premiered at Myrkir Músíkdagar, an element of chance sneaks in. For her part, Snæbjörnsdóttir enjoys seeing what stamp the musicians will put on her work.

“Inherently, in the score, I have little control,” she says. “In a way, it makes it easier for me to let go, I guess. But, of course, there’s always a part of you that has the ideal version in mind and is kind of hoping they do this and not that. But you have to just learn to let it go. It’s okay. It’s okay for me now.”

Thanks to a video game on his dad’s computer, and a patient piano teacher that allowed him to experiment during lessons, Chris Roe discovered composing at an early age.

“I always preferred, when I was playing piano, to learn the piece but come up with a different version of it,” he recalls. “I’m very drawn to jazz, as well. So I did lots of jazz, which has a lot of improvising in it.”

But it was film scores, including that of M. Night Shyamalan’s The Village, as well as the later work of Radiohead’s Jonny Greenwood, that really tipped his hand. Most recently, Roe composed the haunting score for the BBC documentary, Murder in Italy. But even when writing standalone music (such as “Wired,” the spritely composition performed by Riot Ensemble at Myrkir Músíkdagar), Roe says he often pictures an imaginary film to go with his work. His goal: to distill emotional complex emotional experiences into easily understandable pieces.

“I want to have a direct impact in an interesting way,” he muses. “To have an impact on people, you need to use things that are familiar to them. It’s a balancing act, to trigger an emotion in someone. I want them to react on an emotional level. But it’s all about the performance at the end of the day. There needs to be a way to get people to focus on that and worry less about every single bit. Let it wash over them. That’s the goal. There are different levels you can enjoy contemporary classical music on.”

The instrumental world is generally divided into two camps—composers and performers. Passepartout Duo, Nicoletta Favari and Christopher Salvito, fall into the latter camp. When they met (and fell for each other) two years ago at the Atlantic Music Festival, they formed their musical partnership as a way to continue working and traveling together. Cut to now, when the two are full-time vagabonds, currently spending a year in residencies across the Nordic countries. Even with their impressive string of accomplishments, both members find it tricky to describe the specifics of what they do.

“We would say we play jazz,” Salvito offers. “But, at the same time, we totally don’t play jazz. We would never go around saying we’re on the level of jazz musicians.”

With Favari’s piano work and Salvito on percussion, the duo tends to lean toward lighthearted pieces, sometimes performing on toy instruments or even tapping out Morse code to each other. Currently, they’re working on a series of pieces based around the lofty idea of the solstices—but the results make for a simply enjoyable, streamlined listen.

“The hardship that we face in our practice occasionally is a spectrum of elitism, for lack of a better word,” says Salvito. “We get pulled from these very elitist groups that say, ‘What you’re doing isn’t arty and weird enough.' And then, we’re not close enough to the other side to be accepted there. I don’t know, I think that little area in between is where we like to sit. It stirs the best out of both groups.”