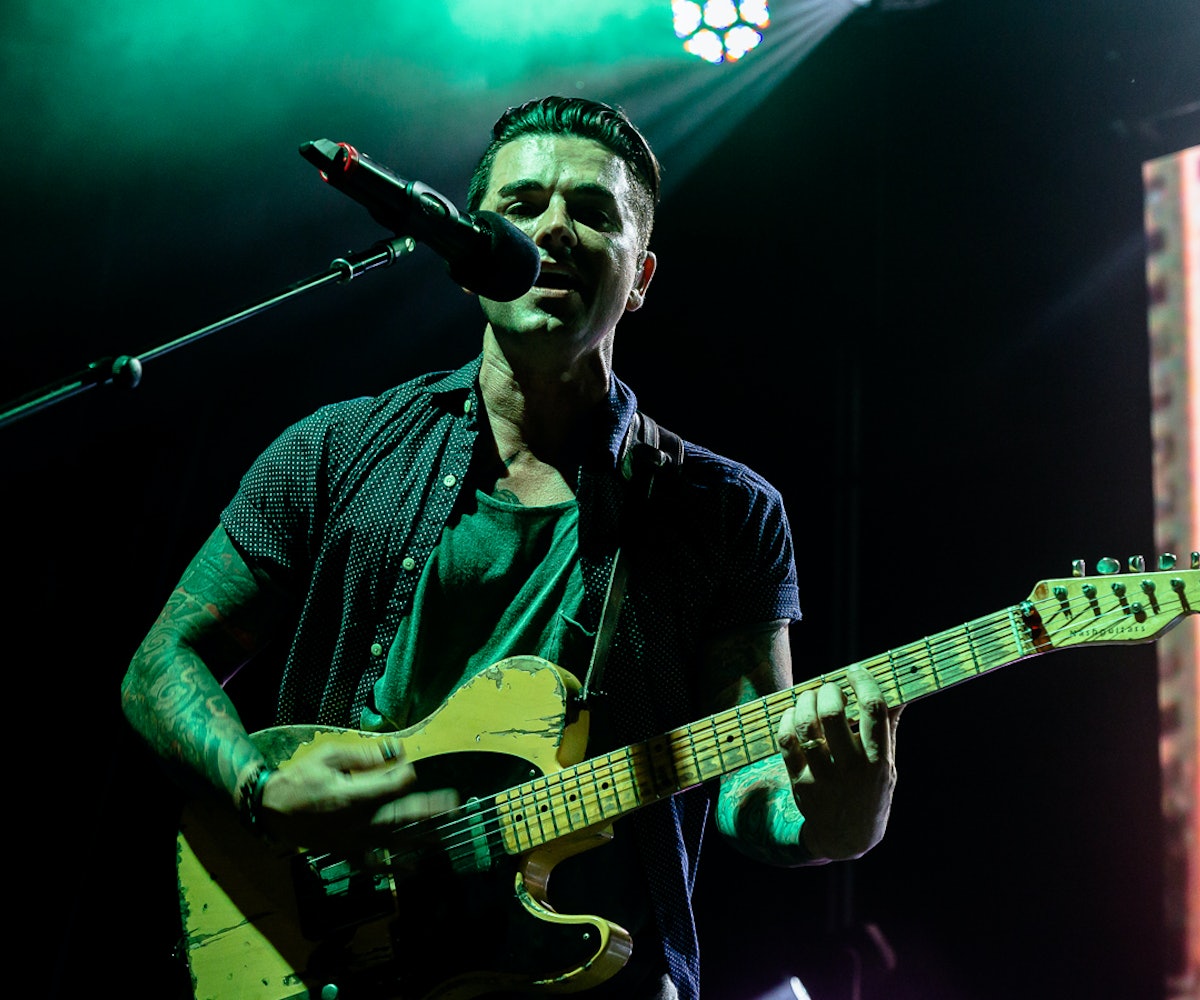 Even the prince of emo sometimes forgets his own lyrics. And when he does, it's incredibly endearing. I’m on the phone with Chris Carrabba, Dashboard Confessional frontman, and I’ve just asked him what his favorite lyrics he’s ever written are. He takes a long pause and apologizes.

“So hand me the rocks to help weigh me down, and tether my legs...” Carrabba trails off, trying to remember how his song goes. He pauses, then softly half-sings the rest, starting from the top.

“So hand me the rocks to help weigh me down, and tether my legs with a cord tightly bound/ to the end of an anchor thrown into the sound/ and test me to see if I will rise against the worst that it can get…" There it is.

It’s been 16 years since Dashboard Confessional's debut album, The Swiss Army Romance, and eight since their most recent album, Alter the Ending. Still, when I ask Carrabba if he’s nervous to release his forthcoming record (hopefully dropping in 2017), he confidently responds, “No, I’m not. Not nervous at all. At this point, after this long, I feel like I'm back to the place I was when I released Swiss Army and The Places You Have Come to Fear the Most. I made those records with nobody paying attention and without expectations for them to do well. The only expectation I had was that I'd make a good record, and I'm confident as hell in that."

He should be confident. Last month, the band announced a small club tour—a big contrast from the arena shows they played the past two summers with Third Eye Blind and Taking Back Sunday, respectively. When tickets went on sale, a majority of the tour dates sold out almost immediately—a testament to how seriously dedicated Dashboard fans are. But why downsize venues after having experienced success at arenas with 15,000 seats?

"I missed it. Playing amphitheaters and arenas… I can't pretend it's not glorious. There's a sweeping nature of the interaction you get from the fans, it comes in waves," he says. "But you can't look every person in the eye. You can't meet every person that's there. And that's kind of what I hold as very important in the nature of a live show."

As an outsider looking in, I can't help but wonder if it all becomes awfully monotonous, tour after tour, or even night after night at the same places, singing all of the same songs. Carrabba, thankfully, doesn't share this concern.

"I generally don't write a setlist for small shows. A unique thing about our band is the relationship with our fans being so vocal: singing so loud, singing so much, and pushing a song that I might've played yesterday to a place I wouldn't have expected today. So monotony isn't something that I say really comes into play for us in any size venue."

If you've been to a Dashboard show, you're familiar with this push he's describing—the intensity of the voices that fill the air as the audience sings along to every single song. As words leave Carrabba's lips, they simultaneously leave everyone else's too. Though showgoers may not have heard a particular song in years, once they hear the opening chords and first few words, all the lyrics come rushing back into their heads and off of their tongues as though they'd never left—in much the same way that the emotions and memories related to certain melodies are also always close at hand.

It's a common phenomenon, this strong association between songs and memories. But if a string of words can bring a mere listener back to a moment of pain, what must it do to the songwriter? Does singing of those old heartbreaks still hurt? Carrabba says, "The same song can evoke the same feeling that you had the moment you wrote the song, or, more accurately, the feelings you had that led you to write that song. And in that moment, you are sunk deep in it. Other times, it relates to who you are now and what you're going through now. And even other times, you're surprised that you're reveling in how that instance in your life changed you for the better or that relationship for the better. Even further, the audience can drive you to a place that you don’t expect. I don’t want to sound too arty, but it's like [the music is] a vessel for the way the audience is feeling it at that moment. That's really magical. The spirit of the room grabs you."

It's safe to assume that a large part of the connection between Carrabba and his fans is due to his lyrics, which have become iconic within the emo genre. These words were afforded the highest honor of the '00s: They served as AIM away messages for countless people, who undoubtedly still find that those words ring true today. Surprisingly, then, record labels used to discourage Carrabba from keeping his main focus on lyrics, something evident in his later work. In other words, if the last three albums weren't your favorite, don't worry—they weren't his favorites, either.

"Can I be completely frank?" Carrabba asks. "I know people say this about bands they love, and it's based on what caught their ear first and how deeply it got them and what made them fans, right? And artists don’t—I hate that word, 'artist,' sorry—I don't know that they often feel this way. I certainly never hear them say this, but, I like my older shit better."

However, this sentiment of Carrabba's will change for his upcoming album, because at long last, as a lyricist, Carrabba is free. He even goes so far as to say that he's hit his lyrical best with this record since he's able to do his own thing after being (wrongfully) told that people don't care about lyrics.

"I like all my records, but feel particularly strongly about the first three records and then bits of the next three. But by that time, there were so many cooks in the kitchen. There were so many people with opinions, and, for the first three records, nobody was around. So that’s what I've done with this record. I didn't say I want to make sonically the same record, although I think I accidentally did make it closer to the first three, but the process was exactly the same. I did not tell anyone I was recording. I wanted autonomy and anonymity. Which, if you have a long career, you do have to go away for eight years if you want to get that."

Of course, I had to bring up the concept of "being emo," since it feels like the obsession these days is as intense as it was in the early- to mid-2000s. And this renewed interest in emo isn't just about nostalgia. It's about a continued need to find joy in the melancholy, a glimmer of hope amid despair. It's not about being sad or gloomy or focusing on any one feeling, but rather is about embracing a full spectrum of emotions. Carrabba gets this, because, as he tells me, he is not sad, and beyond that, he didn't always consider himself or the band to be emo.

"In the very very beginning, I didn't think it applied to me because there were other bands that came before me by quite a few years that everybody in my scene called 'emo,' and that's not what any of us sounded like. We were just doing our thing, and we didn't really sound like each other. We knew the tie that bound us together was our weird work ethic and our dedication to these fans and our belief that the wall between the artist and the fan should be paper thin."

"I've had long conversations with people in other bands who don't like that term, and I just maintain that it doesn't matter what the word is. If it's good enough for the people that love us to call us that—of course, the people who hate us will call us that with a tinge of callousness—but the people that love us call us that out of pure-heartedness, so who am I to scoff at that term? So, simple answer, yes, I identify with that tag. I don't think that the generic use of the word as an adjective used to describe a sad sack—I don't think that's what emo is. I think emo is something that is fearless. It's fearlessly happy. Fearless in all the facets of emotion."

Carrabba will fearlessly release this next album. He will fearlessly write lyrics, and he'll continue to be surprised by the love and support he still receives from his fans. He has words of wisdom for all of us, emo or not. "I think that the power of being around live music can make sense of your world in a very unique way. So my advice is to go to more shows than you ever did."

Starting with this tour, we will.