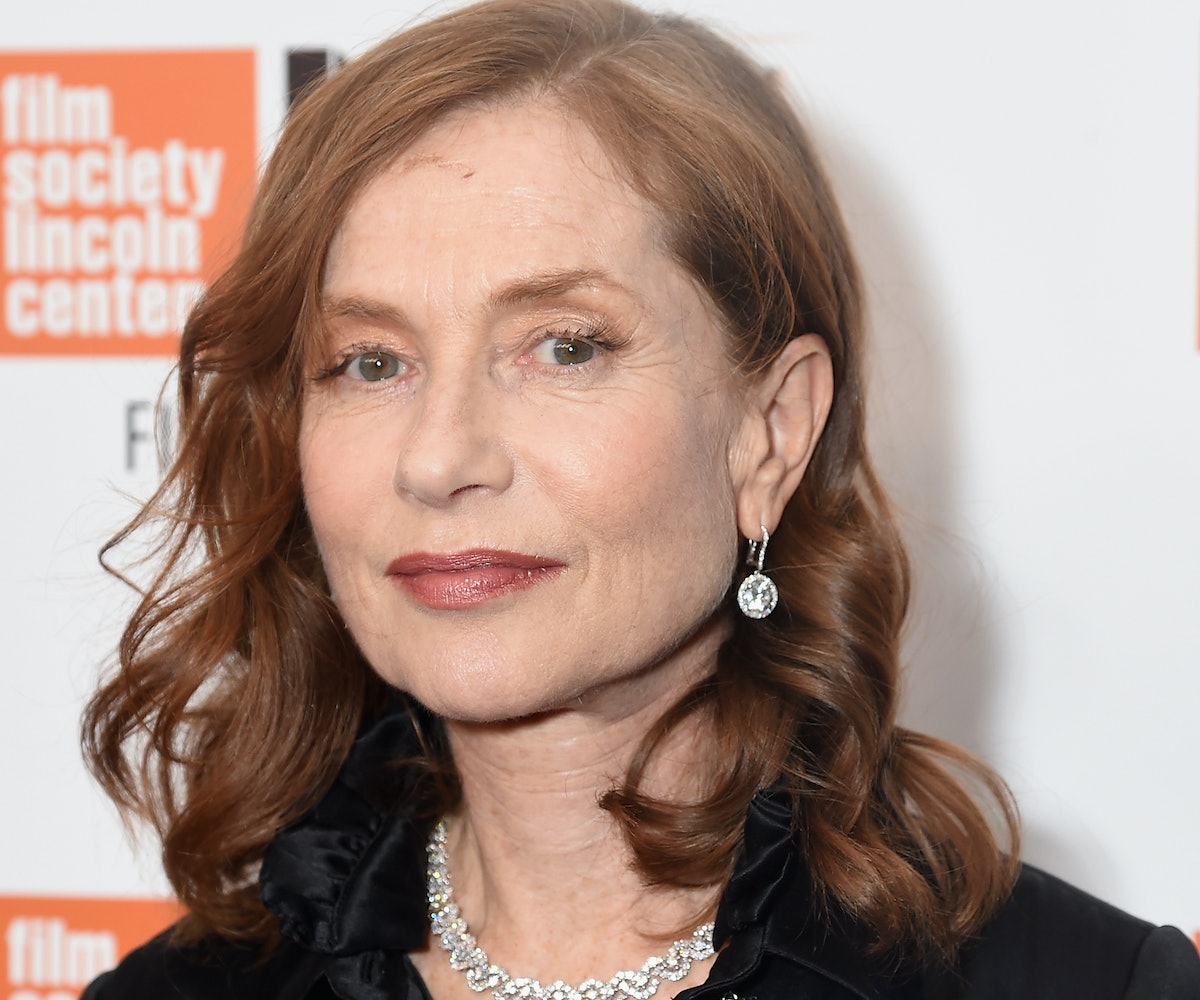 When Paul Verhoeven set out to make his latest cinematic provocation Elle, the Dutch director first approached five well-known actresses for the lead role of Michèle, a middle-aged businesswoman who reacts unconventionally to a sexual assault. Verhoeven himself won’t say who these actresses were, but reports indicate names like Nicole Kidman and Marion Cotillard were among those who turned the role down because of its moral ambiguity and subversive treatment of rape trauma. That Isabelle Huppert is the one who agreed to help Verhoeven realize his perverse vision is all you need to know about the fearless and legendary French actress.

Often referred to by the press as “France’s Meryl Streep,” Huppert is earning career-best nods for her work in the film, which follows Michèle as she balances running a successful video game firm with handling the aftermath of her rape in surprising and sometimes troubling ways. Rather than call the police, Michèle, whose own father committed a ghastly crime decades earlier, casually sweeps up the shattered glass on her kitchen floor, takes a bath, and then orders sushi. When her son asks about the bruise on her face, she tells him she fell off her bike. She never cries, panics, or seeks counseling. She just goes on with her life, which includes dominating all the men in it, until finally discovering the identity of her attacker. Where the film goes from there shocked and delighted audiences when it premiered last May at the Cannes Film Festival.

Huppert’s tight-rope act in Elle is in stark contrast with her second role this year, as a philosophy professor dealing with the end of her marriage in Mia Hansen-Løve’s delicate drama Things to Come. That film, which comes out in December, has also earned Huppert some of the best reviews of her storied career and compounded her chances of being nominated for her first Academy Award, a prospect that greatly excites the 63-year-old actress. We spoke to her recently about understanding her mysterious character, her unusual working relationship with Verhoeven, and why Michèle is unlike any other woman depicted in fiction.

Do you see the film as reality, or is it more of a fantasy?

A little bit of each, but reality because whatever happens to this woman happens in reality, so you can’t avoid that. But the way the event is being shaped, that’s more to be taken as a fantasy, of course. It’s completely imaginary, but it takes you on some kind of interesting path, the way this event has been taken in the book first, and then in the script, and then the film.

She’s a very mercurial character, and her motivations are sometimes hard to interpret. Is more of her revealed in the book than on screen?

No. The script is very similar to the book, and so is the film. We had the same kind of complexity, and what really resonated in the book, which does resonate in the film as well, is the way she is constantly moving on, and she has so many things to care [about]. Her life is really full. So many people are dependent on her, and she has the crazy mother and has to deal with the past of her father. And she has to deal with her son. I like this accumulation of so many people that are dependent on her. Within all this huge amount of people and situations dependent on her, she’s a lonely character. I like that opposition. I like the way she was living in this big house in the suburbs of Paris. I think it also makes the story universal, like a blank environment or background. A suburb has no distinctive elements.

So you understood her right away?

No. I never really understood her, but this is how I like to play my roles.

Is it easy playing someone you don’t understand, or is it harder?

No. I think it’s easy because understanding too much of a character would mean giving answers that would confine me in certain categories which I don’t want to be confined to. I like to be more open. I like the film and the experience of doing the film to be precisely that—an experience—and to make the spectator be part of that experience. So you literally see her thinking, not thinking, making the decision, not making the decision, and certainly never in a predictable way. I like that. Paul Verhoeven never directed me. He never said a word.

Never. In 12 weeks, he never said a word. But then we thought, Imagine if we sat down before we started the film and started to say, “Is she a sociopath? Is she whatever?” Oh, my god. I think we had very, very burning material, and in order to set the fire—otherwise, it was like we were extinguishing the fire before it started, if we answered those questions.

Do you think this is a film about a woman’s sexual assault, or is it a broader character study and the assault is just one aspect of it?

It is a character study that includes an assault, and we want by no means to exclude that. But it’s being shown as almost a non-event in her life. It’s almost shown as an apparent non-event because she’s been raped, she takes the broom, she sweeps whatever was broken in the kitchen, she takes a bath, washes the blood, and orders sushi. She even asks [over the phone] about the kind of sushi, because she wants to know something about the....

She has a plan, but she doesn’t even know which plan she has. Obviously, something happened in her life, and she has to do something out of it. And then as the story goes on, you grab information about her past, you can imagine that there is an answer [to her behavior] in the fact that she confronted violence in her childhood, witnessing her father committing murder and being suspected of being an accomplice to him. But it’s not a psychological study. That’s why I thought it was also interesting that she keeps moving on all the time. And for me, she’s a non-crying woman—she never cries. She never reflects about what happens to her. No, she’s somewhere else, which I thought was interesting, because she’s a fearless character. And at the end, to be very precise and clear, it is revenge. It’s not like you try to excuse the man—there is a sense of punishment.

Do you think the film has been misunderstood by some people?

No. Well, we’ll see when the movie comes out. Or maybe I don’t want to hear misunderstanding reactions to it. Most of the time, in France or in Canada, people really got the film. Some people have been disturbed by the film. You expect to be disturbed by a Paul Verhoeven film, or the world is not the world as it is. The cinema planet would be different. Paul Verhoeven is always on the razor’s edge, and we love him for being on the razor’s edge.

What is it like working with a new director for the first time, in this case, Paul Verhoeven?

Once we were clear on what he wanted to do, especially with the rape scenes, we did a lot of work, we rehearsed a lot, and it was very technical—but frankly, we were completely in tune for 12 weeks. It was a complete dream of a collaboration because it was a collaboration in the sense that he never said a word to me. I even heard him saying that he was interested in what I was doing no matter what, because I was a woman, and it was almost like a documentary about an actress doing this film and reacting to all these situations. And whatever I did was good for him because he said, “She knows better than I do.” So he never said a word to me. Never.

Was the rape scene difficult to play?

No, because it was technical and very physical.

What is it like having these two films that are both getting a lot of attention in America come out at the same time?

It’s just a nice synergy and coincidence that they’re both being released at the same time. It’s interesting that I did the two movies that same year because, with Things to Come, there are similarities. There is a cat in both films, there are real characters in each film, and there were two crazy mothers, very different from their daughters, and that’s interesting too. They’re both crazy women, who apparently gave birth to more constructive daughters.

Do you think these films will play differently to European audiences than American audiences?

That, I cannot tell. I can’t predict anything. I’m not in the stars. What I can say is that ever since Cannes, we immediately felt the international reaction, including the North American reaction, and it felt like this most of the time—it might’ve been the only reaction that I have heard—but people seem to get the film and to understand the film.

Do you pay attention to all the Oscar talk surrounding your performances?

And do you find yourself enjoying it?

Who wouldn’t enjoy it? Can you imagine I said, "No, no, no, no, I don’t want that." Elle is the French entry for Best Foreign Language Film [at the Academy Awards]. I’m really glad for the film, and that was a very nice surprise, so we were very happy for that choice, which was quite a daring choice. And I was very happy for Paul Verhoeven.