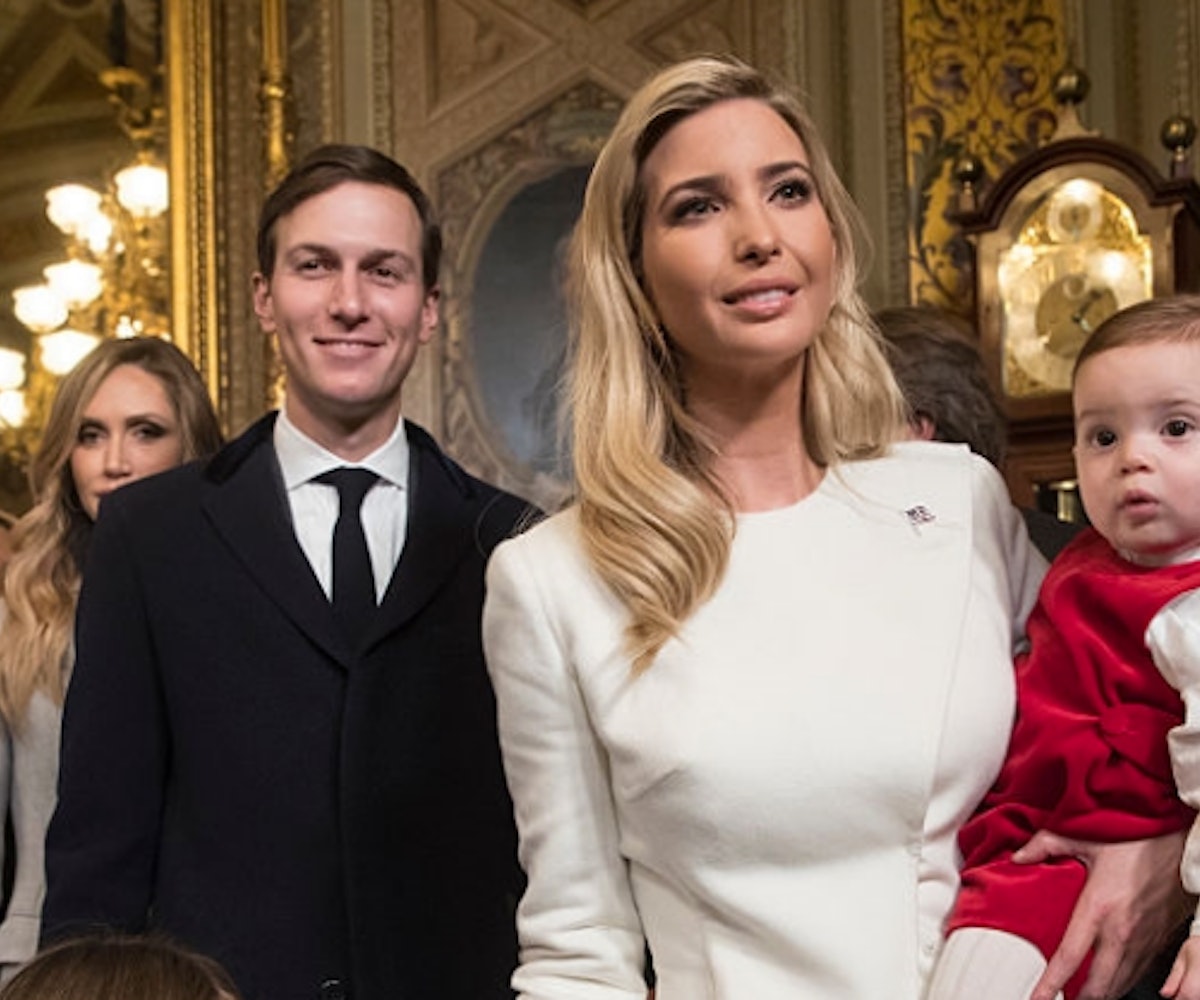 Saturday January 28th was a monumental day in American history. Donald Trump signed an executive order that stands as an effective ban upon tens of thousands of Muslims wishing to legally enter this country. Thousands of Americans across the country protested this horrific political act by peacefully demonstrating at airports around the country. And Ivanka Trump and her husband Jared Kushner, who also serves as Trump's senior adviser, posted a photo on Twitter of the couple decked out to attend a gala; Ivanka was in a metallic silver dress, her husband was in black tie, his hand, visible in the mirror behind the two, resting on her backside.

The incongruity between Ivanka's tweet and the political turmoil that was rocking the country at the very moment that image was posted did not go unremarked upon. Rather, almost instantly, Ivanka was denounced for her Marie Antoinette-esque attitude, and tweets questioning who wore silver garb better, Ivanka or a Syrian refugee, ran rampant across the social media platform.

The mere fact that Ivanka decided against deleting the tweet in question seems as telling as the fact that she posted it to begin with—if Ivanka doesn't realize why this photo felt like an example of, at best, obliviousness, then she is either completely out of touch with what's going on in this country, or she is completely and utterly callous. Or, perhaps, both.

Months before the fateful election, Ivanka Trump and Jared Kushner were hailed by many as being a potentially moderating presence on the then-presidential candidate. To be sure, there were some people who thought that Ivanka's facade of liberalism was a dangerous distraction from her father's inflammatory and despicable rhetoric, but many others couldn't help but remark upon how well put-together Ivanka was and how beautifully modulated were her voice and actions. This type of pass is usually given to attractive white women of a certain socioeconomic class (see also: Melania Trump), but it was sometimes surprising just how devoted Ivanka's supporters were to perpetuating the narrative that she actually gives a damn about anyone other than herself and her family. This type of willful blindness surrounding Ivanka even manifested itself post-election, when artists started a protest group called "Dear Ivanka," under whose aegis they worked to appeal to Ivanka's better nature, hoping that she would be a voice of reason in her father's ear. It appears that they trusted her and Kushner because the couple are avid art collectors.

But if there is one thing that these past 10 days under Trump have taught us all, it is that if Ivanka and Kushner do indeed have any influence over the president, then it is not a positive one. More likely, though, is that Ivanka and Kushner have been sidelined by the many other malignant presences surrounding Trump, perhaps most notably white supremacist Steve Bannon, whose fingerprints can be seen in all that Trump has done in his short time in office, including removing any reference to the Jewish people in the White House's official statement regarding Holocaust Remembrance Day.

And, as others have noted, Trump's explosively controversial Muslim Ban was passed on Shabbat, the lone day of the week upon which observant Jews like Kushner and Ivanka are not working and steer clear of communication. Perhaps this was a coincidence, or perhaps it was Trump—and Bannon's—way of signaling that even his beloved daughter and son-in-law will not be allowed to interfere with his despotic goals. No matter the case, one thing is perfectly clear: Not that she ever intended to, but Ivanka Trump will not be saving anyone now from the disastrous effects of her father's presidency. Least of all, herself.