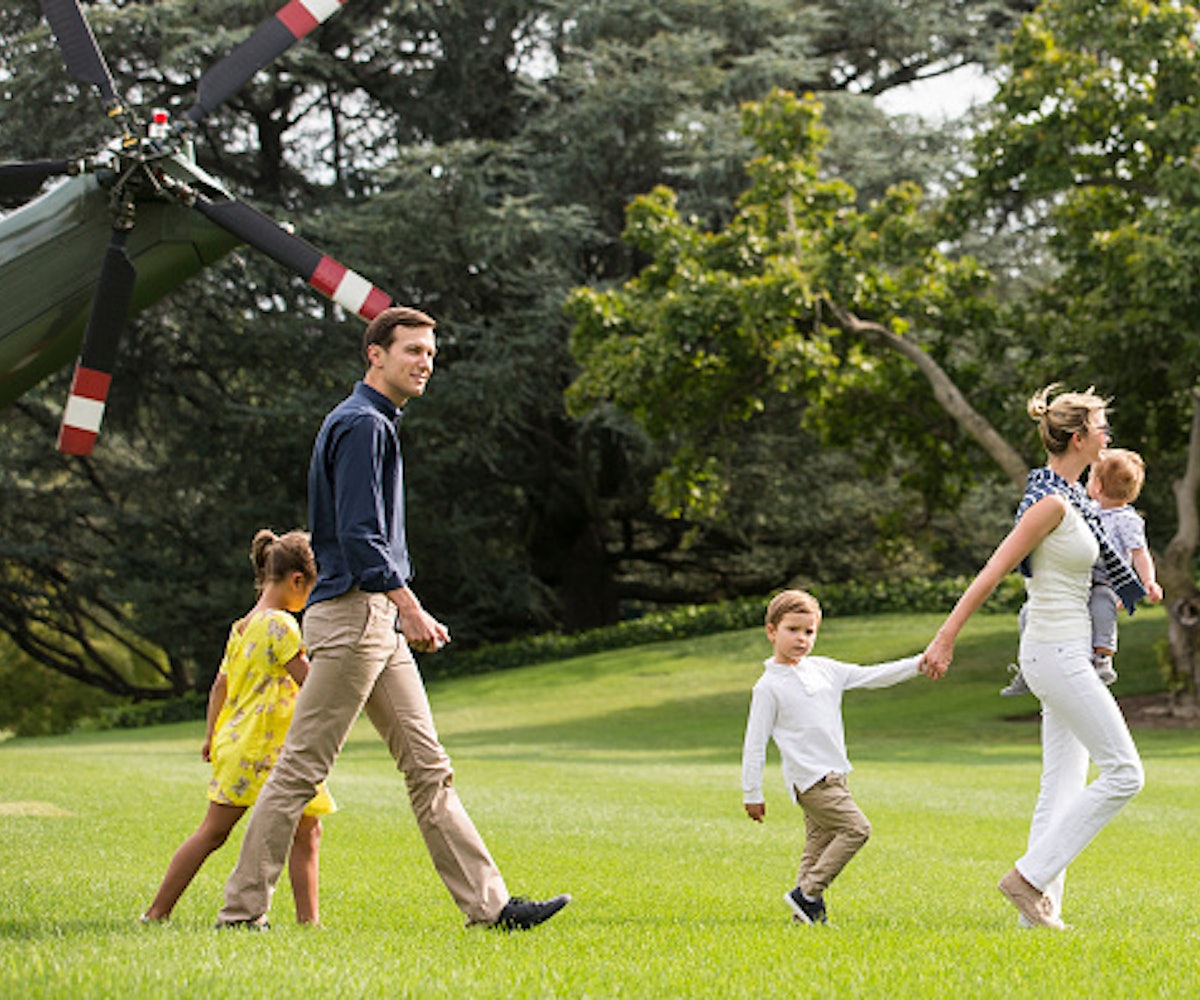 Today is President's Day, and after reading about how, probably, teens should be allowed to run for president (not least because our actual president is a raving mad man who doesn't seem to know what an apostrophe is for), I'd like you to take a minute—just a minute!—and think about Ivanka Trump's low-key obsession with the Kennedy family. Why? Because it's something I only recently discovered and so I don't want to be the only one in possession of this ultimately useless bit of trivia.

Anyway: While you might think that the Kennedy family name should never be invoked in the same breath as that of the Trump's, well, stop being so precious about the Kennedy family, because it's not like they were actually all that perfect. Besides, even beyond Ivanka's fixation (just one second, I'm getting to that), comparisons between the Trumps and Kennedys have happened ever since Ivanka and husband Jared Kushner were named as senior advisors in the Trump administration. Charges of nepotism were instantly—and rightfully, considering neither Ivanka nor Jared had any government experience—brought, but, ultimately, the two were allowed to serve in the administration, with the fact that Robert Kennedy served as Attorney General during his brother John F. Kennedy's administration as having established a precedent.

Do you think Ivanka was upset about this comparison? No! Of course not. Because Ivanka has demonstrated at least two important times that she has a real thing for the Kennedy family, and wants to insinuate herself and her family into the Kennedy legacy. What times am I thinking of? Oh, just when she named two of her children. First, with her daughter, whose name is Arabella, the same name as John and Jacqueline Kennedy's first daughter, who was stillborn. Then, Ivanka and Jared's first son, Joseph Frederick, just so happens to have the initials JFK. Coincidence? Maybe! Or maybe... there are no coincidences.

Beyond this, Ivanka has invested a great deal in perpetuating a fairy tale narrative of her and her family's lives in Washington via copious Instagram posts of her children scampering around the West Wing or riding in Air Force One. These photos are strongly reminiscent of those featuring President Kennedy's young children playing in the Oval Office, and Ivanka's devotion to crafting a meticulous public image is not unlike that of Jackie Kennedy's, which resulted in one of the most successful and significant public relations coups of all time, namely, that the Kennedy administration was akin to Camelot.

Now, look, you might be thinking that this is not enough evidence to go on, that I can't rightly call these random bits of information evidence of Ivanka's fixation with the Kennedy family and their mythos. And probably you're right, except... EXCEPT: The greatest evidence that Ivanka is obsessed with the Kennedy family comes not through anything Ivanka has done, but rather something her stepmother, the First Lady Melania Trump, has done. Or, rather, worn.

First, we must acknowledge that Melania Trump is the queen of passive-aggressive dressing. Exhibit A is when she wore a bright pink pussy bow blouse to the 2016 presidential debate immediately following the release of a recording of her husband saying that he likes to "grab" women "by the pussy." Exhibit B is when Melania wore a white pantsuit—an outfit choice closely associated with Hillary Clinton and the women who voted for her—to her husband's 2018 State of the Union address. Both of these outfit choices are examples of Melania sending a message to the world. What is that message? That she totally hates this life that she still chooses to participate in, so the only way she can assert control is by making her clothes a sartorial subtweet and making everyone around her fully uncomfortable? Possibly!

And exhibit C of that happening was on Trump's inauguration day when Melania wore a powder blue outfit highly reminiscent of one worn by Jackie Kennedy. This outfit choice followed weeks of speculation that it would be Ivanka who would serve as a de facto First Lady once Trump assumed office, that it would be Ivanka who would be the new Jackie. Well, Melania clearly wasn't having any of that, and used her platform to show Ivanka who was the real Jackie heir. Of course, maybe Melania wouldn't be so free in her Jackie-channeling if she thought much about how that presidency ended, but, you never know with Melania what exactly she's thinking.

But Ivanka? You know exactly what she's thinking. And it probably has to do with the Kennedy family.

Okay, let's go back to thinking about how teens are great. Happy President's Day!

NEXT UP
Culture
6 Shows To Binge Once You've Finished 'The White Lotus'
Entertainment
Meet Andreas Metaxa, The Man Behind The Miami Jet-Setting Memes Of Supersnake
Fashion
Collina Strada & Vans Team Up For A Chiller-Friendly Collection
Astrology
How to Use Astrology to Access Past Lives
Style + Culture, delivered straight to your inbox.