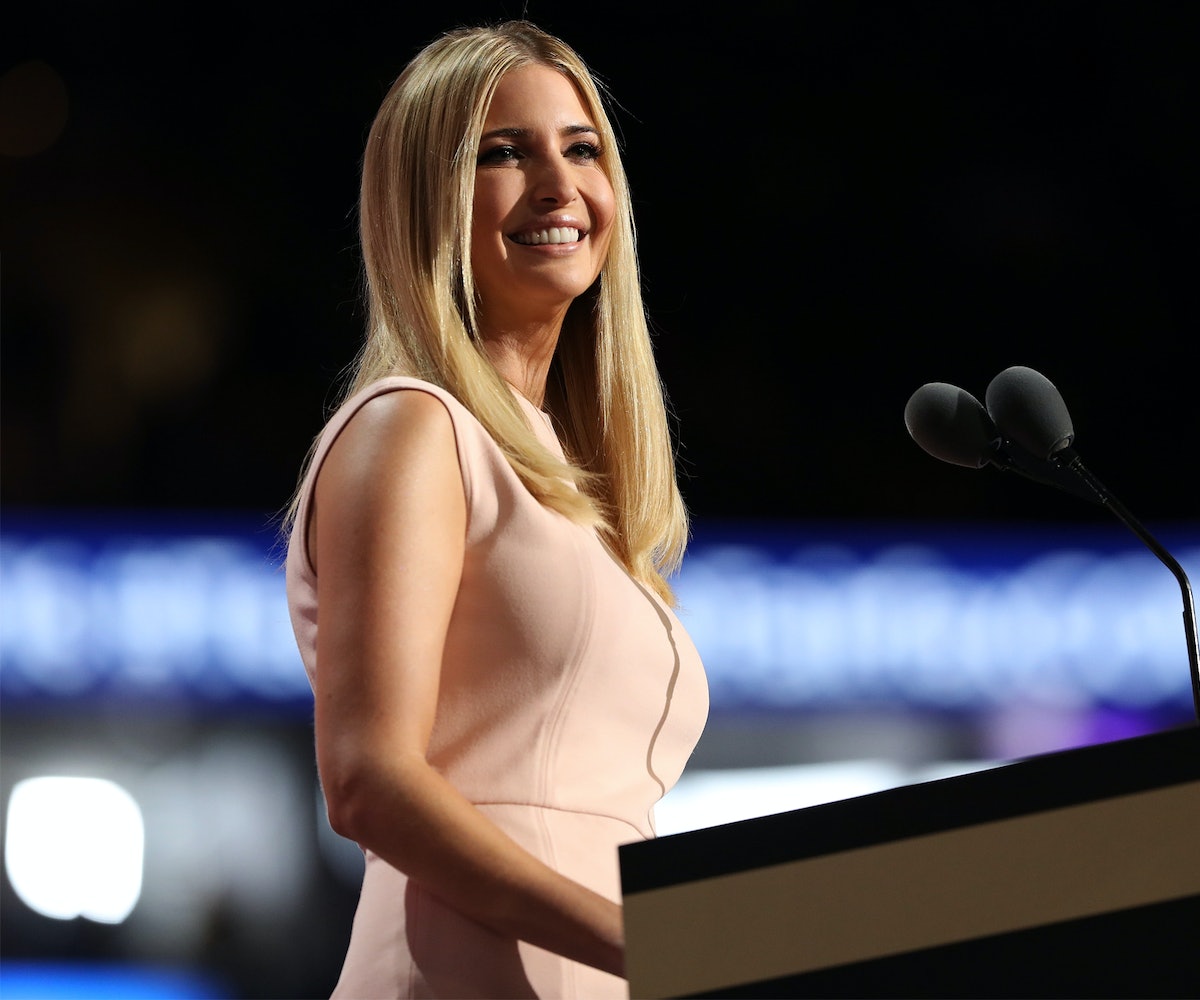 Yesterday afternoon, in a fit of needing to know when the nightmare also known as the 2016 Republican National Convention would be over, I found myself typing into my search bar "when will it end? when will it end whenwillitend whenwillitendajkhkfafkafalngd." If that's not a sign of pure despair, well, then, I don't know what is. But while despair might seem as good a word as any to describe what I was feeling after what seemed like endless days (though had actually been only three!) of hate-mongering, virtual white power rallies, radio hosts giving Nazi salutes, and a racially tinged plagiarism scandal, I was not feeling the resignation which usually accompanies despair. I wasn't just sad, I was angry.

And so it was with that anger that I prepared for the final night of the RNC, the one during which Trump would speak, which would undoubtedly mean visual pageantry so grotesquely over-the-top that Leni Riefenstahl would be rolling in her grave; declarative sentences possessing a technical sophistication level akin to a beginning reader's first book (though of less intellectual value); and truths and half-truths (and no-truths) alike, all repurposed to fit Trump's agenda. Plus, it would all be delivered as inflammatory rhetoric out of a mouth that looks like nothing so much as a meanly puckered anus, which makes me sad, to be honest, because I generally like butt-related things. All of which is to say, I was prepared for the horror show that was Trump's speech. I was prepared for my visceral reaction to his misleading statements (of which there were many). I was horrified to think of all the millions of people in this country who respond positively to this type of base pandering. I was, at least, a little cheered by the fact that Trump's refusal to tone down his hate speech might very well serve as a rallying cry for supporters of Hillary Clinton, and for anyone who was on the fence before Trump's speech. There is no denying it now: This man is a fascist nightmare come to life, and he needs to be stopped.

And yet, despite the fact that Donald Trump is a Cheetos-dusted, hate-filled monster, if last night's convention speeches proved anything, it is that it's his daughter, Ivanka, who left me feeling truly unsettled.

Throughout the convention, each of Donald Trump's children had their time to speak, each of them proving their moral turpitude to some degree (we can safely assume that Donald Trump Jr. models himself completely after Patrick Bateman, can't we?), but none of this really mattered, because they were all just setting the stage for the golden Trump child: Ivanka. There is little doubt that Ivanka has always been her father's favorite (he's even said that if she weren't his daughter, he would date her), but beyond that, she's consistently presented publicly as a refutation of her father's ostentatious ways. She's preternaturally well-spoken, a successful entrepreneur, lives a relatively low-key life with her family, and never makes a misstep with the media or in public at all. Plus, the agenda that she promotes as a working mother is one that is explicitly feminist; it's pro-woman in a way that seems at such direct odds with what her father espouses that it is hard to believe they even know each other, much less are related. In spite of that, Ivanka has spent plenty of time reassuring the public that, despite the fact that women working on the Trump campaign make far less than their male counterparts, her father is "a feminist."

Considering Ivanka has spent the last few months working tirelessly to promote an enlightened, progressive version of her father, it was not surprising that she continued to do so last night when she introduced him at the RNC; it was not surprising, but it was disheartening. In her speech, Ivanka reiterated her stance that her father has "made it a practice his entire career" to treat and pay women equally, and that one of his primary concerns would be to "fight for equal pay for equal work." Ivanka also singled out the plight of the working mother, noting that the gender pay gap is closing for single women, but remains cavernous for working mothers, stating, "gender is no longer the factor creating the greatest wage discrepancy, motherhood is." The idea that Donald Trump—whose campaign manager, Paul Manafort, had implied earlier that same day that the economy needs to get better because women's "husbands can't afford to be paying the family bills"—is an advocate for women is laughable, but the talking points Ivanka was hitting are important ones, particularly when it comes to revamping the workplace for parents in this country, specifically mothers. In fact, these talking points are so important that they are an integral part of Democratic nominee Hillary Clinton's candidacy; these are issues Clinton has been fighting for alongside other Democrats for years. And yet Ivanka was presenting these ideas as being part of the GOP platform, and she was doing so with a million dollar smile and what seemed to be a wind machine gently blowing back her hair. (NB: The wind machine was removed when Donald Trump took the stage for obvious reasons.)

This then is why Ivanka is dangerous. It's not because she is just another fount of hateful rhetoric, like her father. Rather, it's a more insidious problem. She is the smiling nurse promising that the injection she's about to give is for the best, that it won't hurt a bit, even while she knows—she has to know—that she's inserting pure poison into the blood of this whole country. But because so many people want nothing more than to think that no woman so smart, so pretty, so rational, and seemingly in control, would ever support the vitriolic blowhard that is Donald Trump without good reason, they stick out their arms willingly, wanting to believe that maybe Trump isn't so bad, maybe he does know what he's talking about, maybe he won't destroy this country if elected. "Come and join us," Ivanka beckons. "Only we know what's good for you." But they don't.

A Trump administration will hurt the millions of Americans who Trump is more than happy to marginalize in order to promote his 1850s-esque Nativist agenda, one which explicitly denies rights to people for reasons as varied as the color of their skin, the religion they practice, the sexuality and the gender with which they identify, and the country from which they come. It will hurt those of us who aren't specifically threatened by a Trump presidency (so, like, a few rich white guys and Ivanka) because a Trump administration is a threat to anyone who wants to believe that America can be a place of opportunity and progressive values, a highly imperfect and constantly evolving one, to be sure, but one which will do nothing but regress under the administration of a man prone to ad hominem attacks that even a schoolyard bully would disdain for being pedantic. Ivanka is the most dangerous Trump simply because she seems like the least dangerous. Ivanka claims to represent and be an advocate for things that progressively minded Americans want, but those things are not part of the Republican party platform (no wonder then that Ivanka is still not a registered Republican). And so it doesn't matter if Ivanka promises that her father will look out for women if elected, because when it counts—like when Trump chose Indiana governor Mike Pence, who is ardently anti-choice and anti-LGBTQ rights as his VP-pick—it turns out that Trump's actions speak louder than Ivanka's words, no matter how much we'd like to believe her.