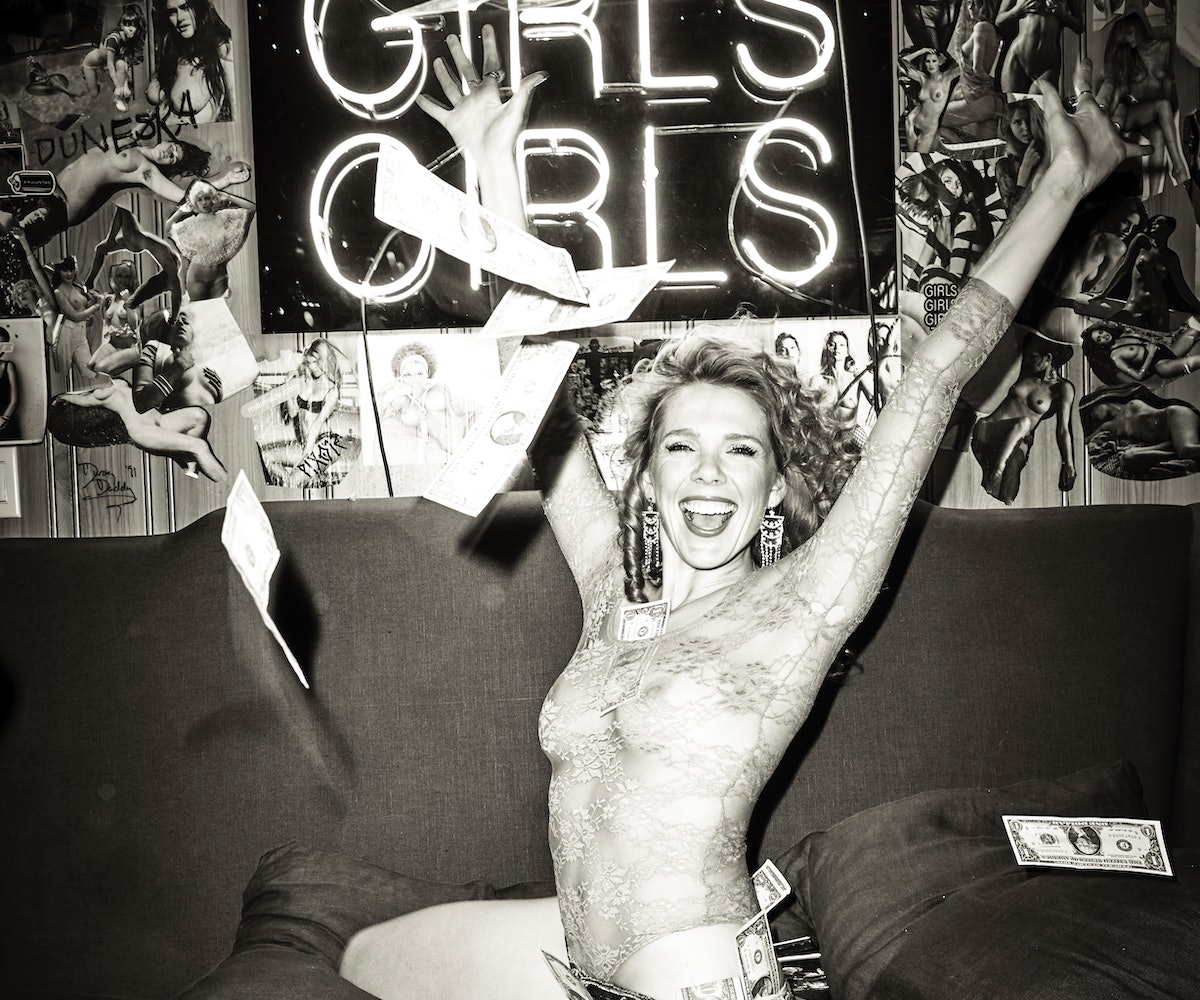 The video starts with a pretty platinum blonde smiling coyly directly into the camera, her tongue pressed lightly onto the surface of a mirror in a club as she moves up and down in a titillating dance with her own reflection set to the psychedelic-inspired “Vicious Cycle" by The Mystic Braves. Just as she seems on the verge of upping the ante with something more explicit than this tease, she begins puffing her cheeks in and out into the mirror, the reflection back making it appear like two puffer fish in a dead-serious mating ritual. She contorts her face, wide eyes and protruding teeth over sucked in cheeks, as she fondles her boobs, never once losing eye contact with herself or cracking a smile. The jig is up. The fantasy girl is a goofball. The boner is dead. The patriarchy sighs a collective groan that yet another woman has ceased to give a fuck about its standards.

The video in question is one of many humorous creations by Jacqueline Frances, a comedian and stripper who goes by Jacq the Stripper across her various social media platforms and as a performer and author. With 62.7K followers (and counting), her Instagram is a favorite of fellow strippers and general enthusiasts of women who prioritize being hot and funny for reasons besides the affections and attention of men, her stand-up shows are uproarious, and she even has a successful line of crass, pro-woman merchandise in her online store. (I highly recommend the pin of a pink cat with a dollar sign for an asshole.)

Her latest creation is Striptastic: A Celebration of Dope-Ass Cunts Who Like Money, a coffee table book of illustrations that she successfully Kickstarted last summer and fall with a tongue-in-cheek video inspired by '80s infomercials. Though Jacq has built the bulk of her online and comedic presence through her crass and hysterical observations, her most consistent break from irreverence is when she is addressing other strippers. On the “Welcome" page of Striptastic, she writes, “These pages are a love letter to the women who have inspired me to live brazenly, to always stand up for myself, and to turn all that pent-up slut energy (I have a lot of it) into cold hard cash. Everything I am, I owe to them."

What follows are 175 pages of comics and short texts that pack hard punches of truth and humor, often in the space of a single panel. Jacq says that writing comics was naturally analogous to her work in stripping and comedy. “In stripping you've got a really short amount of time to distill what you're trying to sell because time is money," she tells me. “Making comics is the same thing: It's how to sell, how to make someone laugh, and how to do it in a really short amount of time."

The comics are mostly aimed at strippers who will recognize their own lives in the ludicrous interactions that take place in the club. (Clients who think you'll actually date them, clients who just want to smell your asshole, clients who insist you two visit Mecca one of these days, clients who just really want to see your butthole). Others serve as more of a What Stripper Life Is Really Like 101 crash course for people who don't even come close to understanding what life is like in this job. (Hot men think they're entitled to shit because they're hot, clients want you to solve their marital and parenting issues, huge swaths of the population even outside the club violate your boundaries.)

Jacq is also clear about whom the book is not intended for. “This book isn't for men. There's this pressure on women to be accessible and desirable and cross-platform and appealing to everyone," Jacq says. “But I've been pandering to men for a really long time, and it's liberating to say, 'No. It's not for you. Girls only.'" She says that it isn't so much about actively deterring men from reading it but that she hasn't made their enjoyment of it central to the message.

The portrayal of men in the book is one of Striptastic's many strengths as a clever subversion of most commentary on sex work: It casts them largely as hapless goofballs rather than as knights in shining armor or predatory sleazes that we are so accustomed to seeing in portrayals of sex work. They are boneheads with boners mostly. One comic starts with a man asking, “What's a girl like you doing in a place like this?" only to be met with a no-nonsense girl saying, “Looking for my father," then pausing a moment, looking concerned and asking, “Are you my father?" Another features the words “A stripper needs a man like a fish needs a..." over a central animation of a hot but cocky-looking young guy with the words “FUCK YOU PAY ME YOU ARE NOT SPECIAL HERE" in red bold letters beneath.

In sharp contrast to these men are the comics showcasing strippers: savvy, hot, and hilarious. “I feel like 'classy' is such a four-letter word," reads one comic featuring a blonde girl in a visor with her tongue out, tropical beverage in one hand and Cheetos in the other. “Like, why be a lady when you can be a broad?" declares Valerie Stunning of Las Vegas, one of many strippers asked to contribute their thoughts to the book. “Clean the fucking pole; staph infections are real and we're all disgusting," reads an acerbic contribution from Charlie Glen of San Francisco. In another submission from Natalie in Hungary, one stripper asks another, “Why are you putting perfume on your tits?" The reply? “So when men try to lick them they taste DISGUSTING."

The book doesn't shy away from portraying the raunchy and raw elements of working as a stripper but does so by portraying such quotidian goings-on that they're more akin to jokes about people who take a shit in the work bathroom at your standard office job than they are secret parlays into some filthy underbelly of society. It's funny that it's sometimes gross.

Behind these portrayals is, what Jacq refers to as, her own “pathologically optimistic" viewpoint and her experience of stripping as something that can be enjoyable for a diverse range of reasons. “The positive aspects of this job are hardly ever showcased. The first fucking question I get asked by people is, 'What's the worst thing that has ever happened to you?'" she tells me, a question I, too, received and still receive when people learn that I was a stripper not especially long ago. “How fucked-up is the fact that that is what people feel comfortable leading with? That's a testament to the way mainstream media drives the narrative, so I really want to be the counter to that."

The camaraderie developed between strippers, and “uncovering and exploiting the fact that patriarchy is at its weakest when its dick is hard, which, let's be real, is all the fucking time," are part of Jacq's project of elevating stripping above the grim discourse in which it usually is discussed. This doesn't mean she's in denial about its tough realities; Jacq is well aware of and enraged by how it's unsafe for so many to come out to friends, family, and partners. As a queer woman with a wife who has always supported her work, Jacq is also aware that straight women who are sex workers often have a harder time in their relationships with men. She says, “I have a lot of friends who are strippers who have a really hard time dating but I think that's not a stripper problem, that's patriarchy's problem." But these negative aspects of the job are precisely why her book is boisterous, irreverent, and in on its own joke.

Though Jacq made clear that the book is first and foremost for strippers, she is open to the prospect of it being a tool that helps change attitudes. “I do want to educate people because humanizing sex workers is still really important, which is still so infuriating that we have to prove we're people," she tells me. “If this book helps normalize stripping, that'll be amazing." And for those women who keep finding assholes who don't get it, “Find a feminist dude. Or be gay. It's fun."