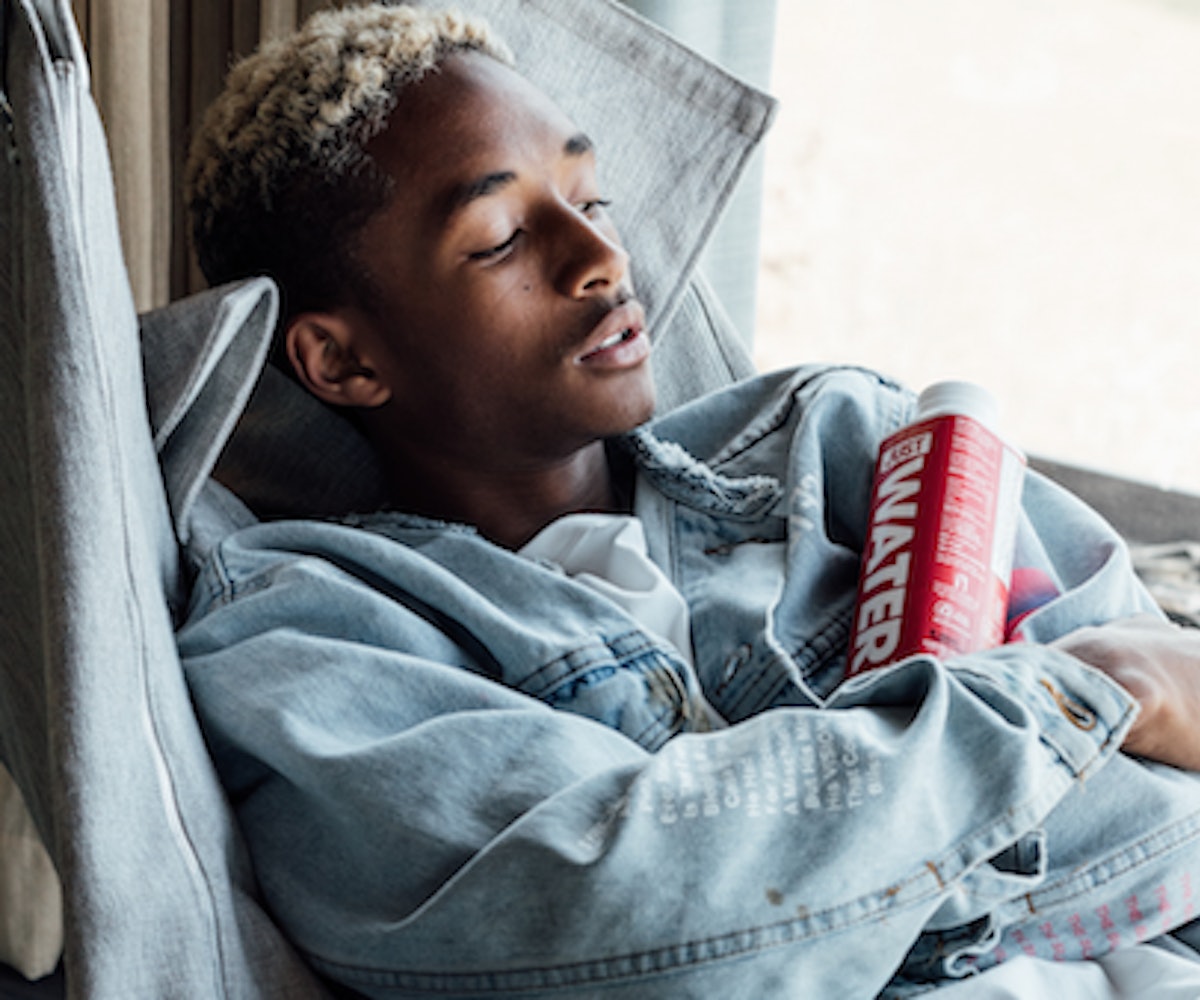 My relationship with water is... contradictory. While I love taking showers, the unrelenting energy of torrential downpour and the musky scent of the ocean (hey, I'm a Cancer, the original water sign) when it comes to drinking water? It's a hard pass for me.

Most days, I barely make a dent in a single bottle of water (unless, of course, I'm on the brink of passing out from dehydration or the flu, both of which, admittedly, have been plaguing me more than they should—because I don't drink enough water). It's just hard for me to muster any enthusiasm about water, much to the chagrin of my water-obsessed friends and family members. Honestly, I had lost all hope about changing my water consumption habits—but then, I interviewed Jaden Smith on an abnormally warm January day in Brooklyn, and everything changed. No, really.

Why did it take Smith to get me to change my dehydrating ways? Why didn't I just listen to one of my mom's many lectures on the subject? I mean... do you really have to ask? Sorry, mom, but Jaden Smith has a preternatural authority. When Smith speaks, you can't help but listen. And not just half-listen and nod accordingly, as I often do when I'm being pestered by, um, my mom (love you, mom!!), but truly listen and understand and make changes.

And if there's anything that Smith knows about, aside from being an incredible musician, philanthropist, and environmentalist, it's water—or, actually, it's a little bit of everything, but also water. After all, he's got a water company, JUST Water, of his own, so naturally, we talked about water. The fact that we also talked about philosophy, depression, sustainability, and a traumatic time in his life when he nearly died after consuming too much meat was less expected, but also not surprising because Smith is an open book.

You can read our conversation in full, below. (I wrote it while drinking a glass of water because, it turns out, even this complicated Cancer can change.)

JUST Water went from being an idea that you had when you were 10 to being a real thing. That must feel incredible.

It feels really good. I mean, it's like the dreams of my 11-year-old self are coming true, so that's the best anyone can ask for. People are always like, "Man, would your younger self be proud of you now?" I feel like my younger self definitely would be, so I'm just blessed to have an opportunity and being able to share something like this with the world.

Is there an age requirement to change the world?

No, I feel like anyone can change the world. I feel like it's about education and creation; those are the things that led me to be here to talk about my passion.

Do you think that children experience things on a different intellectual or creative plane than adults?

Yes. I feel like as we get older, we get programmed into thinking this is how we should be. People will say, "This is how it all works," and then you kinda get confined in that way of thinking. There have been certain times where we've believed certain things about the world. Like, there was a point when people believed that the world was completely flat. But there were people who thought the world was round. Those [other] people completely neglected the [round earth] theory by saying, "No, the world is flat." But when they realized the world was round, then they said, "Oh, okay. Cool, it's wrong."

But if the non-believers would've just listened to the intuition of those who first thought the world was round, it would have been realized sooner. The same goes with people that thought cigarettes were actually good for them, you know? So, it's like the world changes all the time and people always discover new things, especially in science, but I feel like there have been so many amazing movements that have started around the world by all different types of people and all different types of ages, so I feel like there's no age range. I think as soon as you can start expressing your ideas, is when you can start making change.

I know many people think this, but do you consider yourself to be a modern-day philosopher?

Yes, I do in a way, but I'm a learning philosopher, you know? So I get to learn new things every day. When people say "philosopher," they think of somebody that's all-knowing. But if I think of Socrates and Plato, I think of people that just have a really well-rounded education on the whole world and on the things that they were speaking on. For me, personally, I am growing to have a well-rounded education on everything, because you're never gonna know everything. So I feel like yes, I am a modern-day philosopher in training.

Have you seen a difference in the amount of waste created since you started this company? How much more change do you want to see?

I want to get it to the point that we can see an extreme difference in the amount of the waste that goes out into the ocean and landfills. I feel like we have definitely seen a difference, because the people that have switched over to JUST [Water] from a normal company, they're reducing their footprint of CO2 when it comes to water by 74 percent. They're reducing the amount of petroleum-based plastic that they use by 82 percent. So over somebody's entire lifetime, if they make that switch, that's a really big difference as far as plastic production is concerned. So yes, we have seen that difference, and we know that difference is there, but it's time for it to grow and expand even further.

My goal would be to go to landfills and take a picture of a landfill and be like, "Here's a huge landfill." And then take a picture a year later and be like, "Here it is now," and it's completely empty because I would want to take the things in the landfill and turn it into, you know... I would wanna take a table out of this, make one of these out of it, make furniture out of it, and also create art out of it so that we can start using our trash for multiple reasons.

So... do you only drink JUST Water?

Did this water launch change the way you feel physically?

Definitely. There was this science article that came out recently that says one of the best things for fighting depression is drinking water, and it says that when your body gets dehydrated that your brain, inside of your skull, it floats around in the fluid. So as your body continues to get hydrated, once it gets to crazy points of dehydration, it starts to suffocate your brain.

Yeah. [laughs] It starts to squeeze it, and then it starts to make you think thoughts you wouldn't normally think, and then it can be a real leading cause of depression. In the desert when people need water, they start hallucinating. They start seeing things. Or if you start drinking saltwater because you don't have normal water, you start going crazy. If you drink a lot of water, you will really, really stay level-headed in the subtle way that you would normally. A lot of times people feel that they're hungry or tired or they're cranky, but really they're just thirsty.

Has your global awareness changed the way you eat?

Yes, I became vegetarian recently. It is very environmentally friendly to become a vegetarian, because the amount of CO2 emissions that go up from all of the places where they manufacture meat, it's one of the top CO2 emissions and methane polluters in the world which is really bad.

But I became vegetarian because I almost died one time. I had eggs and bacon for breakfast and then I got in a hot car for two hours straight without moving, without working my metabolism while getting my muscles going or anything. I went to In-N-Out. I had two burgers and fries and a milkshake, and then I went to this video shoot, and I almost died during the video shoot. I almost couldn't finish shooting the video. It's a video called "Uno Dos" by Teo. I almost passed out during the video shoot, and it took me the whole day, and then I fasted for the next 36 hours after that, and then after I came out of that coma, I just became a vegetarian.

Yeah. I encourage people to become vegetarian, but only if you have an experience like that. You can't just say that you're gonna become a vegetarian. You can't say, "You know what? It would better for me to become a vegetarian." That's not gonna work out for your life. It's only gonna work if something happens to you that really changes you and if you really, genuinely feel inside that you need to do it. I did it because I didn't want to feel sick.