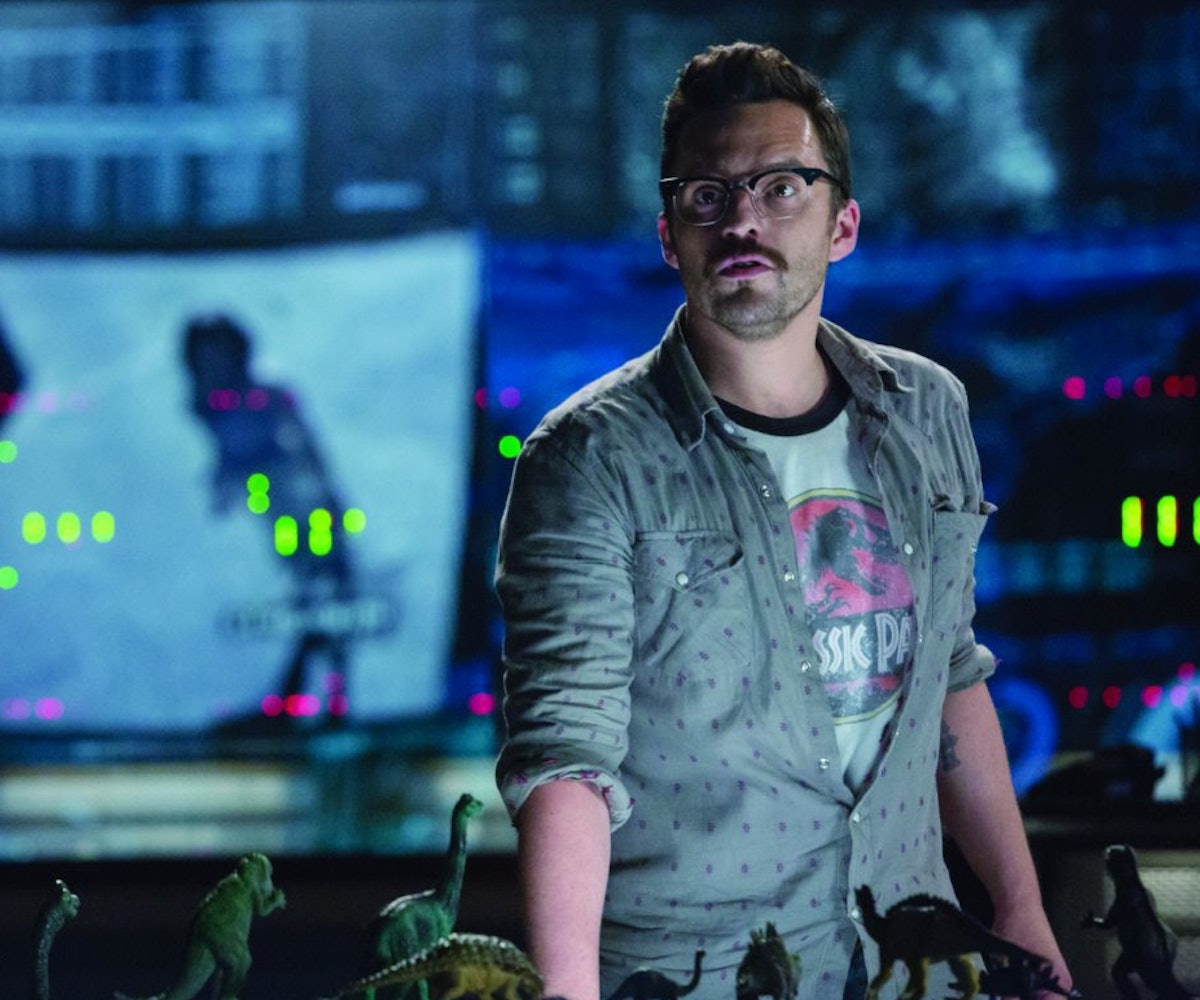 In case you missed it, Jurassic World made about a bajillion dollars this weekend, and although Jake Johnson wasn't the reason herds of people packed theaters over the weekend (that would be the genetically engineered, computer generated dinosaurs), he was the movie's most welcome surprise. Playing the requisite computer geek who spends all of his time in the control room, the New Girl star is not only the film's comic relief, but also a stand-in for the audience members who see the original Jurassic Park as sacred territory, not to be tampered with. In a movie that stars Chris Pratt, it's saying something that Johnson gets the best one-liners. We spoke to him recently about his blockbuster debut and the future of New Girl.

You worked with Colin Trevorrow on his first film, the indie Safety Not Guaranteed, and was the only actor on set to see him make the jump from that to this. What was that like?

What’s interesting about that is as an actor, you can see if a director has ‘it’ or not. And you can see very quickly. Some directors don’t have it, and the whole crew knows it—there’s no hiding it. It’s like being a captain of a ship—everyone knows if you have a bad captain. Sometimes in movies, even with a bad captain, the story is strong enough and the acting is clean enough and the editing is amazing that you can make it work.

What’s nice about Colin—and you learn this day one on Safety Not Guaranteed—is that you’ve got a good captain. And what makes a good captain is someone who is confident—they know what they want and they’ve thought about it. There are directors that just pretend to be confident, but they don’t actually know. Colin does his homework. And so he’s able to explain to you exactly what he wants. And if you question it— which a lot of talented people do —he gives you a reason that makes you say well ‘oh, you actually are right.’

Jurassic World is this sprawling blockbuster, but your character is confined to one room. Did it feel like you were acting in this CGI extravaganza or a smaller film?

That’s an interesting question. It felt kind of in between, because I was there after they had shot everything. My first day of work was Chris Pratt’s last. It was one of those weird ones. We shot all of Pratt’s stuff in the control room and then he said his goodbyes. And every day of work for me was like another great actor’s last day. The whole cast and crew had three months together of an experience, and I didn’t, so I felt like an outsider in a really nice way. In a way I am an outsider so it was a very natural feeling for me, that there’s this thing going on and I’m slightly on the outside. But I felt invited to the party, I just didn’t feel like a family member.

In many ways your character feels like an avatar for fans of the original, with all his references to the first park. How did that come about?

New Girl was recently renewed for a fifth season. Do you ever look beyond the show and wonder what life will be like once it’s over?

Yes and no. I still have another year at least. We’ve been picked up for 18 more episodes. That’s 18 episodes more than a lot of shows get to do. The truth is the day that New Girl ends will be a very sad day. I’ll definitely miss the people very much and I’ll miss the fans. We’ve had an unbelievable fan base through it, but I’ll cross that bridge when we get there in a long time.

Do you have any other upcoming projects you’re excited about?

I’ve got a movie coming out in August called Digging For Fire, directed by Joe Swanberg with this ridiculous Robert Altman-esque cast. It’s about a married couple that has a 5-year old kid and feel like you’re losing yourself in that relationship. Each of them take a weekend apart – her with her girls and him with his buddies looking for a dead body in their backyard. It’s about what happens to each couple having a different adventure outside of being a parent.