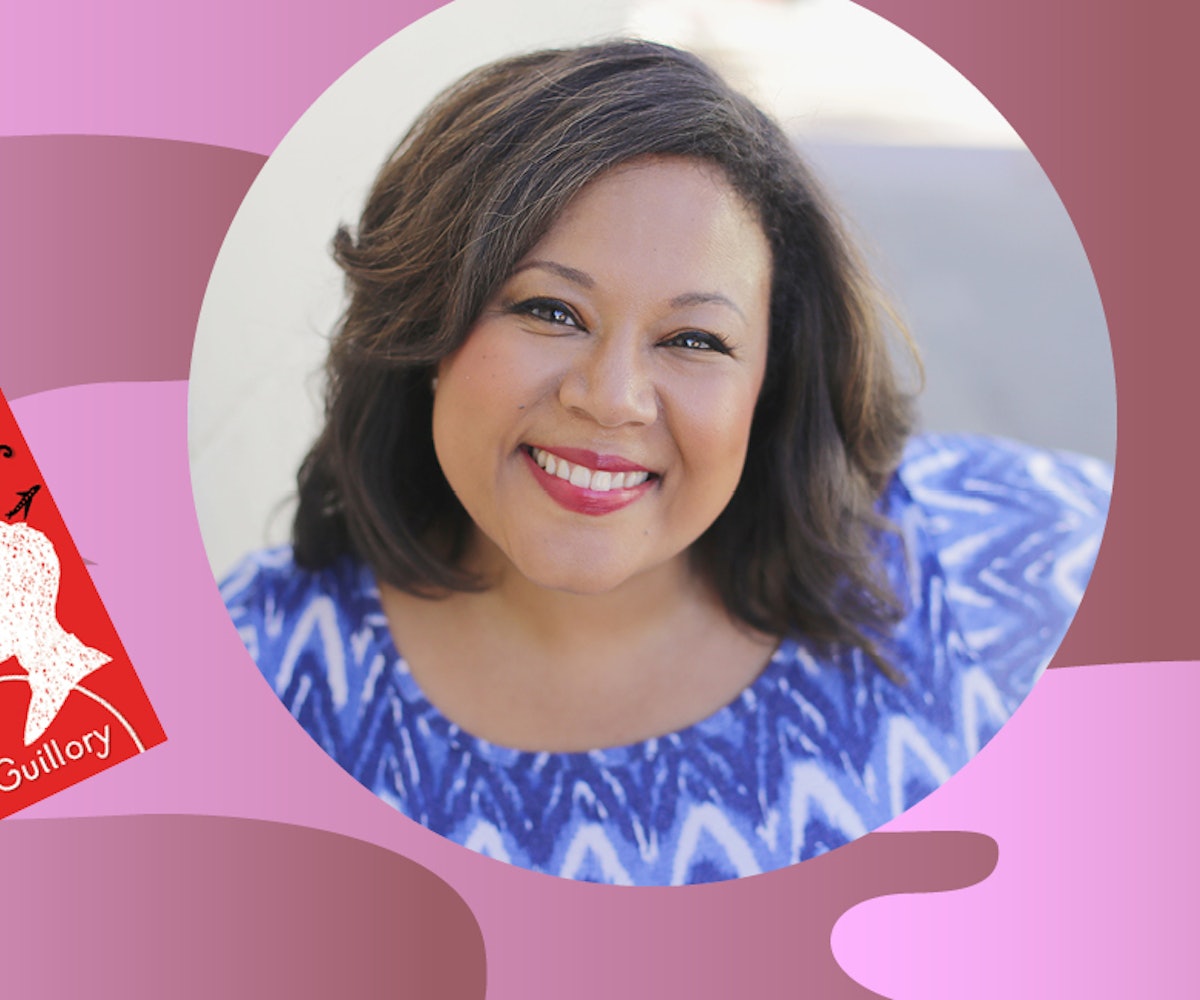 It feels like there's a collective craving for escapist pop culture right now, so desperate are we all to take our minds off of the basically nonstop stories of existential doom that pervade our news feeds. And while it's essential to stay well-informed about what's happening in the world, paying attention to these things almost necessarily means being angry, and who can maintain those levels of outrage 24/7? Nobody. We all need something to take our minds away from the world's problems for at least a little while, even if only to allow ourselves to believe that happy endings exist somewhere, hard though they may be to see off in the distance.

Romance novels were Jasmine Guillory's personal form of escape a little while back, when she was, she told me recently, dealing with "some pretty scary medical issues, which are all resolved now." Guillory explained that during that time she started "reading a ton of romance novels... and they made me happy and relaxed, and got my mind off everything. And they made me feel better in an emotional way." And, really, perhaps there has never been a better time to be reading romance novels than now. The genre is more densely populated than ever before with, as Jaime Green made note of in a recent BuzzFeed article titled "Who Gets A Happily Ever After in 2018?", works that don't just offer regressive fairy tale endings, but also make powerful statements and serve as "a reflection of America, in more ways than one."

And now Guillory, who is not only a practicing lawyer but also a newly minted novelist, has contributed to the genre that helped her through a difficult time with her just-released book, The Wedding Date. Though Guillory told me that when she started reading romance novels, "I wasn't thinking about writing one at all," she soon started thinking of a plot line and realized that just the act of writing the book made her happy. And it's easy to understand why pretty much immediately. The plot centers around Alexa, a lawyer who works in a high-profile position at the mayor's office in Berkeley, California, who has a meet-cute in a San Francisco hotel elevator with Drew, a pediatric surgeon from Los Angeles, who's in town for his ex's wedding. One of the things which makes The Wedding Date so fun to read is how recognizable the characters are. These aren't people who only care about marriage; both Alexa and Drew have high-powered jobs that really mean something to them. And unlike the historical bodice-rippers that used to embody the genre, this is not a book populated only by white people. Though Drew is white, Alexa is black, and Guillory handles issues related to race with a frankness that is not only welcome but also vital for any narrative set in modern times.

Below, I talk with Guillory about how she knew this was the book she wanted to write, the importance of having a creative outlet in your life, and the trouble with texting in relationships.

You're a lawyer, but did you always know you wanted to write fiction? How did this novel come about?

I actually didn't even think of writing for most of my life. I have loved reading since I was little and I read compulsively. For some reason, writing never seemed like a path that was open to me, I'm not sure why. And then, about seven years ago, I realized that I didn't really have a creative outlet in my life. I'd been driving myself toward one career for such a long time that when I got home, I didn't have anything, like, fun to do or something that I was learning, something that exercised a different part of my brain. I'd always loved to read, so I thought, I think I might like writing. It seemed like a kind of scary thing to start to do. I think particularly as you get older, it feels weird to learn new things because you think, Well, what if I fail at that? And then you realize it doesn't really matter if you fail. It's okay, nothing was riding on it. And so I talked to some friends about it, some of whom had published already, some were other writers. And they were all really encouraging of me, which I didn't really expect. So that was really helpful and that helped give me the push to start writing in general.

It's so true that it doesn't really matter if you fail at any creative endeavor you're trying out, because you're doing it for you.

Exactly. And I think, especially as someone who had been in professional school and kind of driving yourself to a specific career for so long, it seemed like everything was riding on, like, that one exam or that one brief that you write or that one job that you get. It was kind of a relief to work on something where nothing is riding on this. I'm doing this for me because I like doing it. And if it's not good, I could stop. I could try to learn more, I could try to get better. It doesn't matter if it's not good right now, it's okay. We've all not been good at things. But it's also hard to kind of do that... I think it's hard at any point in life, right? But to learn new things as you get older, it can be scary and exciting all at the same time.

Yeah, definitely. Which then makes the reward, like when you actually complete something, all that much more validating and great.

When I finished the first draft of my first book—which is not The Wedding Date—I was like, I can't believe I finished it, you know? It was a way too long first draft, it needed a ton of work, but I wrote a whole thing. Which was really exciting and wonderful.

In The Wedding Date, one thing that I really loved is how nobody's job was an afterthought, which is something that happens, especially women's jobs, in many romantic comedies.

I'm really glad that that came through. That was one of the things that I wanted in a book—to have characters who felt like real people, who cared about their jobs, like me and most of my friends. I think also that's something that I think about in watching Shonda Rhimes shows, which are about people and their relationships and their friendships and dating but are also very much centered around their work. And I really kind of liked that aspect—that these are women who care intensely about their jobs but that doesn't mean that they don't also care a lot about their friends or go out drinking or have romantic relationships that are wonderful and terrible. And so I really wanna show that side of being a professional woman.

What were some of the most fun parts of the book to write for you?

A lot of the wedding chapters were a lot of fun to write. I've been in a lot of weddings, too many weddings. And so there's a lot of stuff that I kind of love about the whole wedding culture and stuff. It was kind of fun to, like, gently make fun of just, you know, like the bouquet toss or the clothes or the hashtag. It's all weird and funny and people feel really intensely about it. And I love writing all of that stuff because I'm so familiar with weddings, and it was especially fun to have Alexa as kind of an observer who doesn't know any of these people. Most of the time, when you're at a wedding, it's people that you know relatively well and you kind of understand why they make certain choices. But it was fun to have Alexa kind of thrown in the middle and barely even know the person who she's with and think like, What is going on with all these people?

A lot of the time in narratives like this the conflicts that come up between the couples fee really manufactured. I was preparing for that while reading this, but instead, the only kind of issues that arose were ones that would legitimately crop up when you have a commitment-phobic guy and distance between where the two people are living.

I think I very much didn't want the conflict to feel manufactured or that it was, like, someone flying in from the side, like Drew dates some other girl or Alexa sees him with somebody else and there's a big misunderstanding. That wasn't what I wanted for the book. I worked hard on thinking of conflicts that felt real to them. One of my favorite moments actually was right when I was telling a friend of mine, who was at that point in a long-distance relationship, about it, and he said, "I really hope that they have a fight about misunderstood text messages." And I was like, "As a matter of fact, they do." But that made me feel good because he was like, "Yes, that has happened in my long-distance relationship a number of times." And so I was really glad that conflicts like that are things that happen in a normal relationship. That was what I really wanted.

Misunderstandings via text have happened in close-distance relationships quite a bit too. A missing exclamation point can be interpreted a whole bunch of ways.

I've been to a few writer's talks with people who write, not quite historical but not quite contemporary books, set in the '50s or '80s, even, and they talk about how much easier it is to do that because you don't have to deal with texting and people have misunderstandings you have then, you can't just call someone from your cell phone. There are so many things that crop up around texting. There's so much human drama around having cell phones with you all the time. If someone does not answer you for two hours, what does that mean? Have they seen your text? Do they have read receipts on? I mean, as humanity progresses, it's not like we have resolved these human emotion conflicts. They just come up in different ways.

The Wedding Date is available for purchase now.