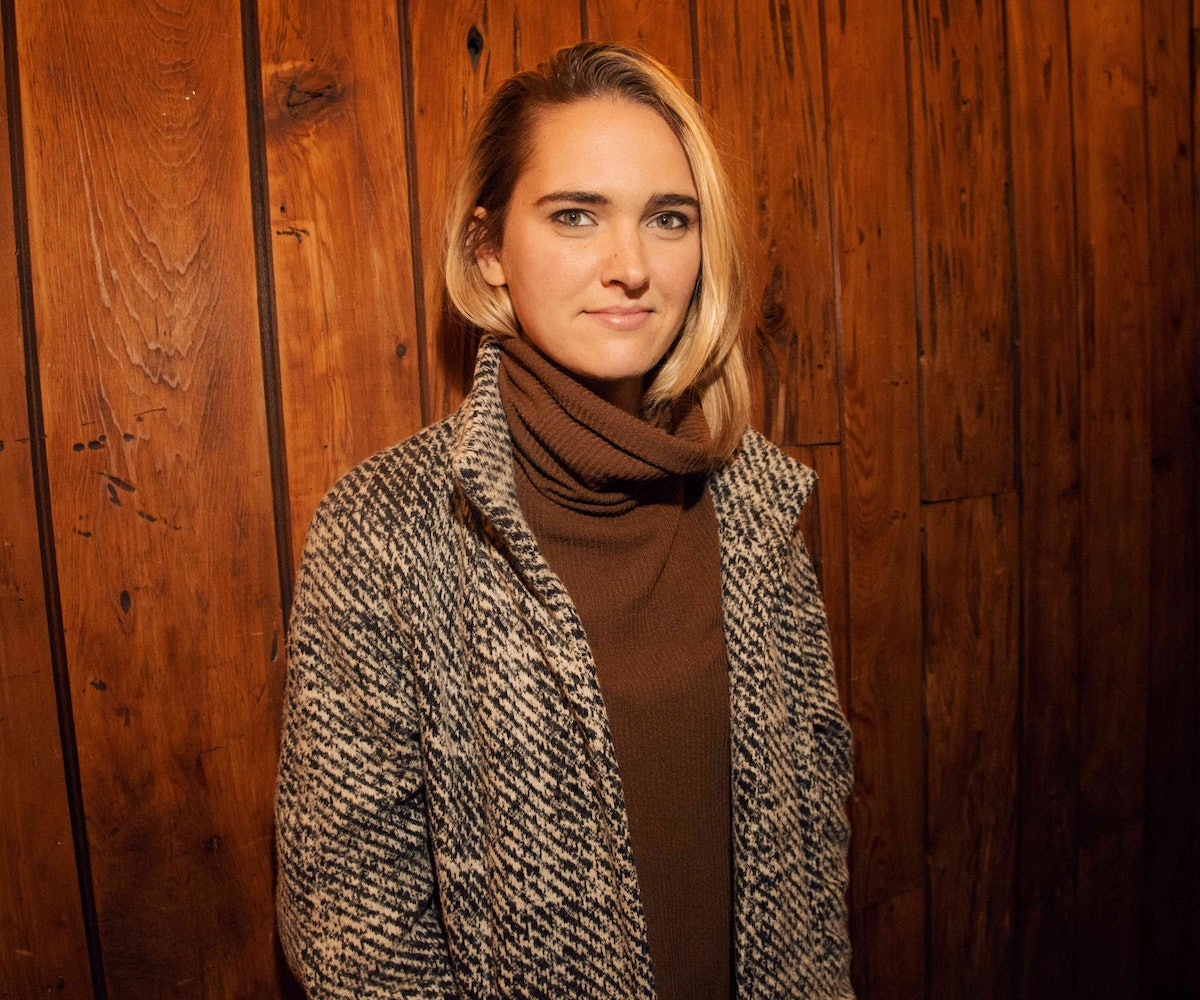 The first time I spoke to Jena Friedman, she was shopping for a white pantsuit, Hillary Clinton-style. It was November 7, and Friedman, a stand-up comedian and writer who had worked on both the Daily Show and the Late Show, was preparing for her appearance on Stephen Colbert’s Election Night Special. The conversation was meant to be about how we, as a nation, can move forward after such a bruising and divisive election. Why was Clinton so disliked? And what would Donald Trump do after he lost? Friedman, like most people she knew, fully anticipated—and prayed for—a Clinton win.

On November 9, our conversation became like a transcript from a dystopian fiction, two people discussing an alternate reality where humans didn’t engineer their own demise. “It feels like an asteroid has smacked into our democracy,” is how Friedman described the election results as they poured on, live on Colbert’s show. “It is so scary and sad and heartbreaking, and I just wish I could be funny. Get your abortions now, because we’re going to be fucked.” At the time, Friedman had just premiered her stand-up special American Cunt a mix of social and political humor, on Seeso. Now, she’s gearing up for the release of the special’s album version, which comes out on the same day Trump is sworn into office. We caught up with her to see how she’s been adjusting to life in this new reality. Ahead, our conversation.

Did you get any sleep on election night, after the Colbert taping?

I don't know. I don't even remember. I blocked it out.

How are you feeling today as opposed to in the immediate aftermath of the election?

I don't accept that he is going to be president, but I accept that democracies are fragile and that empires fail. I'm better. I'm trying to figure out how to talk about it and, like, be funny. I think a lot of comedians are not talking about it, or the ones that are are struggling really hard to make it funny. Before the election I was excited to work on anything that wasn't political, that wasn't just women and gender and all this kind of stuff. But now we have to double back on that.

Are you going to Washington this weekend?

For the Women's March, yeah. We're trying to get guys to go, too.

How are you doing that?

Tweeting, asking people. I had a show the other night and a guy kind of—he was sweet, but—jokingly heckled, and we brought him on stage, and we were like, "What are you doing on the 21st? Do you want to come?"

What are you doing on the 20th? Are you going to watch the inauguration?

I think I'm flying back to New York from L.A. I don't want to watch it. I feel like we should've done that all along with him. I watched a little bit of his Thank You Tour, and it's kind of funny. But I think that's our problem. If we find him funny, we're a part of the problem.

You’ve been performing stand-up since November 8. What is your routine like now? How has it changed?

It's all new stuff. Psychologically, if I have something that's out there, I feel happy doing it, so I'm trying to do new stuff. I was away for three weeks after the election and really didn't do any comedy. And then, the past couple of weeks, I've been back doing shows. It's hard because people are tired of it and they're also scared. And we don't really know how to attack it or what to say, and some people seem to say they just want to be safe and not talk about it. I personally can't get on stage and talk about my personal life right now but to each his own.

How are you planning on opposing this presidency?

I'm working on some political comedy projects. I'm teaching a class at a comedy school in New York, that's a political comedy class, to try to answer people's questions on how they can use comedy to protest. I don't have answers, and I try to not feel totally deflated because of all the effort that we did prior to the election. To say that it didn't work is a misnomer because we reached a lot of people. I feel like I'm getting over a breakup. I'm, like, "She did it, she won by 2.8 million votes." I can't get over it. But it did feel discouraging if you were on the trail all year and making constant comedy that spoke to people and then have this be the outcome. It's so discouraging. I tell myself we didn't fail. The system failed, all the systems failed. To answer your question, I'm trying to figure out ways that activate people and share whatever things I have to try to help people channel their frustrations to a productive, creative place.

Stand-up comedy, in particular, feels like a medium that lends itself well to protest. You’re literally speaking into a microphone.

I'm not shying away from it. I was looking forward to taking a breath and not taking the politics to heart but, at this point, just doing stand-up, even if you're not funny, is like a form of protest. We have free speech, and we are exercising it, and this might sound dire, but I honestly don't know how long we're going to have it. How far we've already split before he's even been inaugurated is so shocking.

Do you think tweeting can be effective? Can it bring about change if enough people do it?

It is a bit like screaming into a void, but I don't necessarily know because sadly outrage is actually effective—outrage changes politicians. A&E was going to have a show featuring the Klan. We all freaked out on Twitter, and now they're not doing that show. I don't know if Twitter was the reason they're not doing that show, but it does feel like a powerful tool to have. Sadly, you can tweet at Paul Ryan, and he might not read it, but he might also read it.

When the news of the Russian hacking came out, was there any part of you that felt comforted or happy about it, in the sense that it delegitimizes him further?

Am I happy about it? No, I'm devastated. And I'm more devastated that people don't seem to care. That's the craziest thing. It's crazy that Russia hacked us, but, like, Donald Trump was asking Russia to hack us. This is out of their playbook in what they've been doing in other countries, so it's not like it was ever remotely a shocker. It's more the shocker that Republicans seem to not care. Conspiracy theorists are bringing loaded guns into pizza places when they're ignoring the actual conspiracy that's right in their faces. That, I don't get.

How much space in your head does this occupy on a daily basis?

Are we on a date? I don't know, it's a lot. I don't have kids; I'm freelancing and working for myself right now. So, it's a lot. A lot of my friends, especially friends who are writers and who work from home or for themselves, are trying hard to focus. I'm getting better, but I have to selectively turn off the news more than I used to because there's something new every day. If you had talked to me a month ago, I'd be like, "Ugh," but now I feel like we're settling into this new reality, so I don’t necessarily tune it out but just navigate carefully when the crazy news comes in and figure out how to respond to it and how to, like, also function.

Have you been using Twitter to find voices of reason amidst all the noise?

I really have. I'm trying to calm down, but I stopped reading the news so much and really just follow the journalists who I like on Twitter. It's like going to a farmer's market for your news. I follow Sarah Kendzior, Jonathan Chait, Summer Brennan, Andrea Chalupa. Michael Moore has been really great, actually.

You've created your own media bubble.

I totally have. But I also think the bubble is a bit of an illusion because it's news that’s, like, fact-checked, you know? People who just cover stories responsibly that are grounded in reality—is that a bubble? I don't know.

Do you have any New Year’s resolutions?

It has nothing to do with the election. Us, comedians, we talk a lot, so I want to listen more and read more and explore more. Patience, I think, is always good.

Do you think it’s important to reach out to people who voted for Trump and communicate with them?

I think it's critical, especially to women who voted for him, because they're going to be hurting. How do you get through to them? Maybe because you look like them, they might listen to you, I don't know. It almost feels racist to try to see through the point of view of a racist person who lacks empathy. I know that people are struggling and they're hurting and that they wanted a change and that they're not all racist, misogynists, or idiots. People are really struggling because they're left behind. How do you talk to that section, you know? And then there are people who are sick, and I don't really need to talk to them at the moment. I just want us to evolve.

How are you preparing for the next four years?

I think we're going to keep fighting. I'm not looking at it as a four-year period of time. I'm looking at it as the future. For as long as I feel safe in this country, I'm going to be fighting for people who are vulnerable.