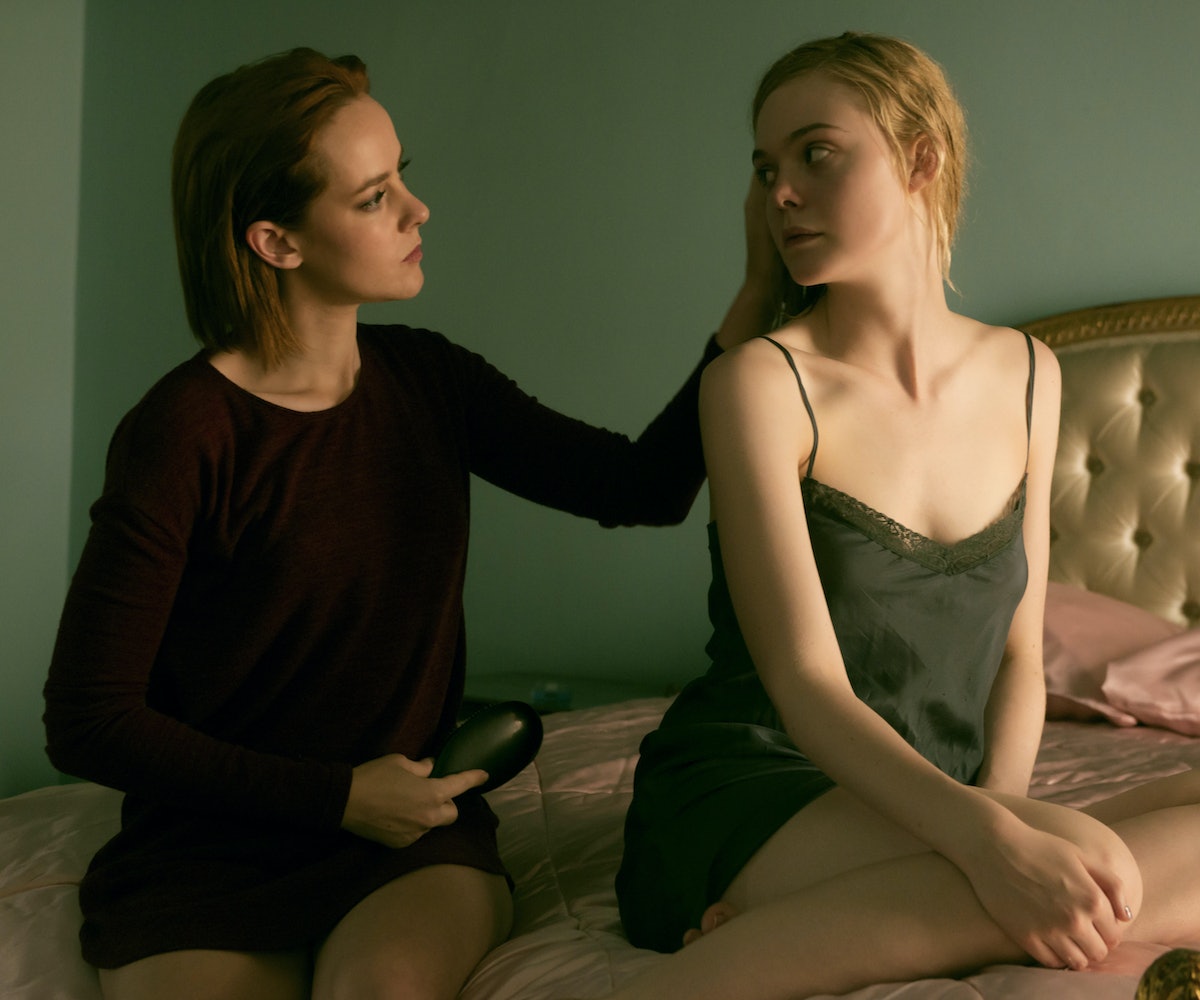 Nicolas Winding Refn's The Neon Demon poses a lot of questions about humanity and society's priorities. From the nature of beauty—its importance in creating a hierarchy, its dangers, and its advantages—to the exploration of sexuality and commentary on the desperation of loneliness, the psychological thriller stands as a cautionary tale, and forces the viewer to look at themselves and criticize their shortcomings and priorities.

Like all films that successfully tackle the nature of the human existence, The Neon Demon morphs in its meaning and implications depending on the state of the watcher's mind-set. For one of the film's stars, Jena Malone, the film has taken on an entirely new interpretation through filming and post-production. Ahead, she explains the meaning behind her character, her buzzed-about necrophilia scene, and how it carries a heavy significance in our current gun violence-ridden society.

One of the things that was really relatable about Ruby was her loneliness. What do you think she is trying to say about the human condition?

I think it’s more about the fact that she is a natural caretaker. And that under this caretaker, she kind of brings people in and warms them to her. Yet no one is taking care of her. It’s sort of this really interesting film where you kind of become the person that you want, and love the way that you want to be loved. That’s where she lies, and it leaks through. The loneliness, the desperation, and the depravity that she finds herself engaging in is because of the lack of love that she is receiving.

This movie is saying a lot about the nature of beauty—both its power and its danger. As a makeup artist, Ruby creates this art, enhances the beauty, and gets to manipulate it. Do you think that she views beauty differently than the other characters?

Yeah. I think that’s what’s so interesting. They’re kind of these three witch characters, like the three wise men. Sarah offers the fable that age is what kills you in the beauty industry. Jesse symbolizes that you will eat yourself alive if you know that you have to constantly be perfect and fake. And mine is about self-love and about that beauty is basically in the eye of the beholder. But if the beholder is never held, then there’s no way for beauty to thrive; beauty becomes very deprived. I think that her relationship with makeup is similar. She’s not saying that she’s beautiful. She’s taking other people’s beauty and controlling it, caring for it, and nurturing it. It’s a very manipulated relationship.

One of the scenes that stands out and stays with you the most is when your character engages in necrophilia. What was your mind-set like in that scene?

Every time I would be on set, I thought about how much Ruby wants to be loved and how desperately she wanted love in that scene. That’s an easy thing to conceptualize or to distance yourself from, but once I got into the nitty-gritty of what that was, it allowed for these long takes. And at the end of each take, Ruby would end up crying, which they didn’t use in the film.

The necrophilia was actually a cathartic release of her own loneliness. I initially thought it was going to be a very lustful thing or a very lonely thing, but when you start engaging in that ritual—which you’ve never done before in your entire life—you don’t know what to expect from that. I realized how deeply human it was. That’s what was so shocking to me. In expressing that raw need, it just drew out Ruby’s vulnerability. It almost felt good to be crying at the end. That was the orgasm—that was the release of fear or the release of deep loneliness. To be able to release that onto someone else was a cathartic experience for her.

How do you interpret your character's final scene?

The only way I could think of it was that I had to be very literal. I couldn’t think of it as, "This is the seventh girl she’s eaten, and this is a ritual of magic," although it absolutely could be. For me, it was a ritual that happens after you are able to be close to someone. It’s a highly teenage state, actually, where you’ve just left the lips of your lover, and you come back, and you’re swooning at the moon, and you’re touching where they’ve touched. It’s a very beautiful, nostalgic point of view. But within that, there’s the twist of sort of this bloodletting, which you feel it’s almost like something’s happening inside of her body that’s going back to the birth, or menstruation, or a rebirth. It feels so positive, where, normally, blood feels so negative. I like that I was able to create a holistic, love-like ritual that ended in a rebirth.

Has the way you view the film changed since becoming a mother?

Your priorities shift, your hormones expand, and everything changes in a really beautiful way. If anything, it’s not so much becoming a mother that’s making me look at the film differently; it’s more the time that the film is being released. When we’re dealing with such depravity in our own American society, extreme loneliness, a lack of understanding, and what happened during Orlando and Germany... It’s just interesting for me to have engaged and presented this character that was engaging in such extreme levels of depravity and seeing that I was able to love her. As a mother now, I'm finding myself really engaging in these extreme acts of depravity and finding it harder to find that lesson of love. We’ve created a fable of the sort of extreme lack of self-love and the consumption of beauty and the expression of loneliness. And in a lot of ways, you can kind of strip it of its glamour, and you can strip it of its context. But the root of it is so similar to what we’re facing on the front page of CNN. That’s what’s making it a little bit more challenging for me to talk about the film because we’re all at a place where it’s very hard for us to process what’s going on.

How are you going to teach love and beauty standards to your son?

Humans have the greatest capacity for both fear and love. Without the understanding of both, we can only live a shallow existence. It’s an important lesson. These are very important times, and it’s really about: What are we teaching ourselves right now? What are we learning from this experience? How are we processing it to be able to become better, fuller, more human? How do we have a better understanding of humanity from this, instead of pushing it into fear and pushing it into angst and pushing it into anger?