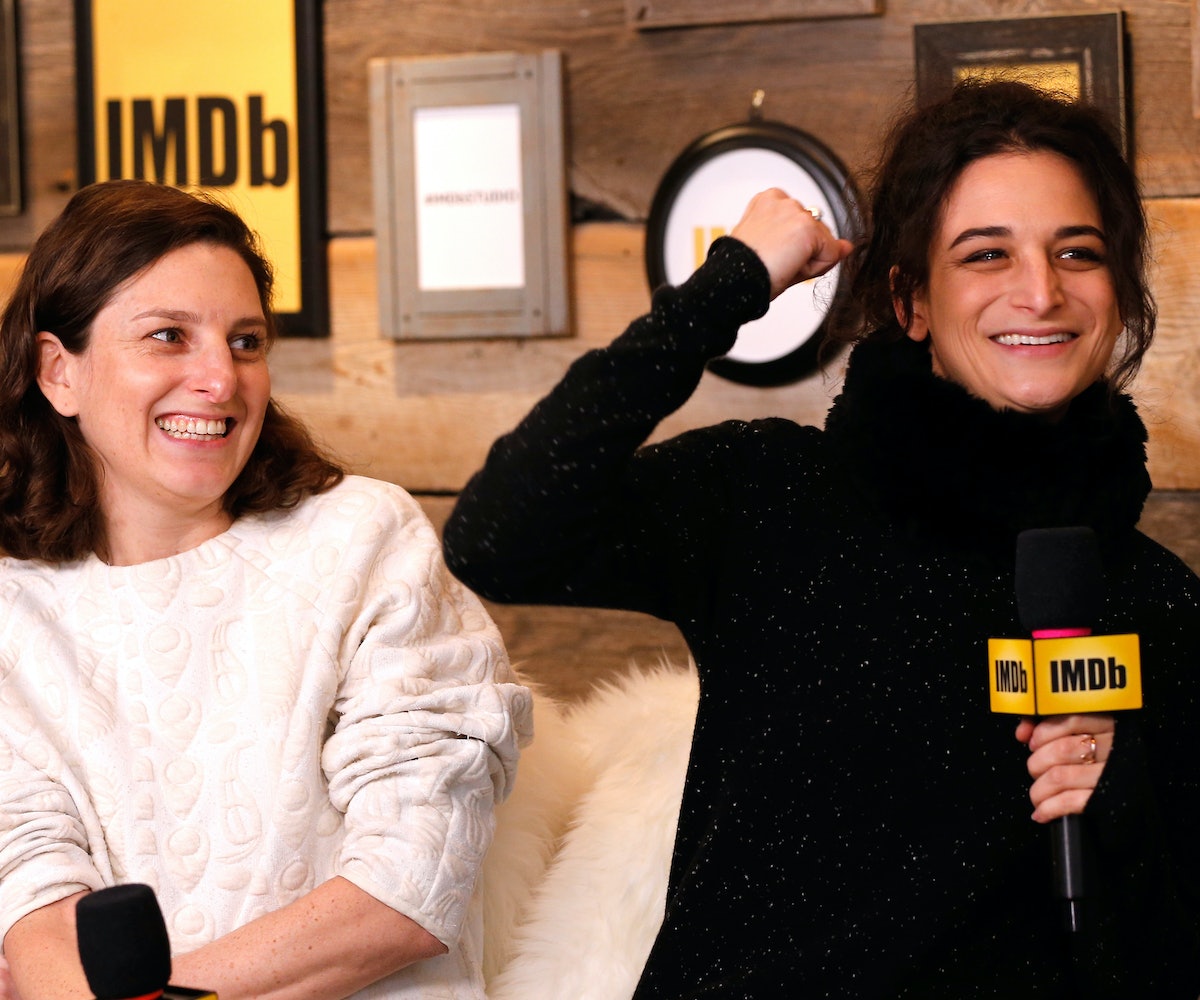 Expectations were high when Jenny Slate and Gillian Robespierre returned to Sundance this year with their new movie Landline. Two years ago, the duo premiered their edgy romantic comedy Obvious Child at the festival, and its ecstatic reception launched both of their careers, Robespierre as a director and Slate as a budding movie star. So with Landline, a story that on the surface is about two sisters who bond when they discover their father is having an affair, audiences were anticipating another truthfully told comedy that balanced raunch and sweetness while exploring some pretty serious thematic territory. Don't worry: Those expectations were met.

Robespierre, who co-wrote the movie with her Obvious Child collaborator Elisabeth Holm, set the story in New York circa 1995, which allowed her to make amusing references to ‘90s touchstones like CD-listening stations and Curly Sue. Landline’s pre-smartphone milieu also asks us to remember a time before texting, when characters had to talk on the phone and face-to-face and conflict couldn’t be avoided with a convenient Twitter check. In the film, Slate plays Dana, a 30-something who’s questioning her own engagement to her fiance, played by Jay Duplass. When she runs into an old college friend (Finn Wittrock), sparks fly. Meanwhile, her teenage sister Ali is experimenting with boys and drugs and clashing with her parents (John Turturro and Edie Falco, great as always) in their Upper West Side apartment. The family loves each other, but are tied together mostly by their shared history, and as their lives begin to spin in opposite directions, they struggle to stay together.

We met with Slate and Robespierre on a Saturday afternoon in Park City, Utah, shortly after the two of them and thousands of others took to Main Street for the Women’s March organized by Chelsea Handler. We spoke about that, the differences between being creative and being famous, and why cell phones are making us worse people.

You two spent the morning at the Women's March on Main Street. Why do you think it's important to protest and what do you hope to get out of it?Gillian Robespierre: I think the only way to organize is through people power. The only way to meet people now is to get the fuck out of your house, and it's hard to do that, and we have busy lives, and we're addicted to our couches and Netflix and our little computers that are in our pockets. I think it’s very easy to unite that way, and we should use and abuse it, but I think we miss a tremendous amount of actual gathering and human-to-human contact, which is what our parents did for civil rights and the women's rights movement. I don't know if social media will be as effective without people actually being on the streets together.

Jenny Slate: Donald Trump and the people who have aligned with him—his cabinet and the people he has chosen to run this country—they are predators, and predators will convince you that you are alone and that your voice doesn't matter, or that you're saying something that just won't be heard because it's not strong enough. And I think that courage comes from the heart, and your heart is activated when you are around people and things to love. Predators and bullies will also try to convince you that change has to happen in an instant—like when they knock you down, that's change. But the fact is that change and human progress happens at many, many different rates, and part of being an activist, as Gil has always told me, is doing it in your own style, and that means believing in many different timelines and having a real wellspring of hope and ingenuity and resourcefulness, and I was out there because our country was founded by people who were protesting. And that history is very, very, very, long.

Do you feel that, as a public person, you have a specific obligation to be vocal about what's happening?JS: Sure. There are many different schools of thought about what you deserve if you have decided to become a public performer, a public person. I don't believe that just because I'm a performer, that my private life should be documented and that I deserve to be stalked or feel that I'm in danger or have my picture taken when I don't want it to be. I think anybody that says that doesn't really have an understanding of the full experience, and they're confusing being famous with wanting to be an artist or a creator. But I do think that when I'm out there on Twitter, it comes with a great responsibility, and I'm proudly an activist, and it is a privilege to have so many eyes, and it's also a great responsibility. I think that at this point, anyone who's not out there saying, "I am a feminist, something is terribly wrong out there," isn't doing enough, because a lot of people are about to get fucked with, and that is real.

What's it like coming back to Sundance with a new movie after the success of your first one?

GR: It's very different. In 2014 I walked in really not knowing what I was walking into. I had never been to Sundance before, I never participated in any program, I was never accepted, even though I applied. I applied to the director's program and got rejected twice. My shorts have been rejected. I didn't come here with a chip or anything, but I did not know what to expect, and we went through this process of one-on-one interviews for what felt like 24 hours straight. When we sold it to A24, it was life-changing, but [first] we all went back to our lives, and it didn't happen immediately. Jenny went back to L.A., I went back to New York, to my desk job. A24 was setting up little interviews along the way before the release of the movie in the summer, and I was meeting with the New York Times on my lunch break.

Jenny, that was a life-changing movie for you too.JS: Yeah, it was the first time I felt like I could prove to myself, and other people too, that I was a legit actress. I did comedy because that was the most natural thing for me, but if I could just be in dramatic films, I would. But not to be a celebrity. I feel so precious about that. I always had this image of myself of what I would be like as woman, and what it would be like to go to work, and my father even one time let us stay after a play to watch the actresses come out the back door at the A.R.T. in Cambridge, Massachusetts, to say, like, "Jenny, it's not glamorous. They do their job, and they go out into the day. Do you want that?" And I was like, "Yeah, I want that." I want to get up and shower, go to work, and do this beautiful fucking thing, and then go and make dinner for someone I love or with someone I love.

GR: But, it is nice being acknowledged for your work.

GR: You know, we do this work in a bubble, and then we are doing it for other people, and hopefully those other people connect to it and they like it.

JS: And accept it.

Gillian, after Obvious Child, was it a priority to link up with Jenny and Elizabeth once again to make your next film?GR: Oh yeah. While we were on tour with Obvious Child, going from state to state, having these deep conversations with strangers about reproductive rights and justice, we would go back to our hotels, and it was one of the best times of my life.

GR: We would go back to the hotel and maybe have a drink and relax. Maybe a couple of beers. And we'd start talking about not what the next project was going to be, but our lives, and how we felt. And then it just turned into this story about a family, and it was very organic for Liz and me to come up with this story, and it was always with the idea that Jenny was going to play the older sister. And the story changed and mutated over the course of writing it, but this role of Dana was always for Jenny. And it's always nice to write for somebody who you—I mean it's not like I knew how she was going to perform, because there is so many surprises that happen during rehearsal, so many surprises that happen on set, and Jenny pulls things out of nowhere that I didn't expect while we were shooting. But writing for her voice is comfortable and exciting, and I love collaborating with her. And Liz, we're not related, but we feel very much sisterly toward each other. But, that doesn't mean we're always nice to each other. We are tough on each other, and we push each other to be better.

You set this movie in the mid-'90s, before the texting revolution. Was it liberating not having to deal with that?GR: One hundred percent. I mean, that's the reason why we set it in the '90s.

Was it difficult to go back and write truthfully about a time before we all communicated via text? Were you able to remember what that's like? JS: Oh, I feel like I can remember it so well. I feel like everything in me is oriented toward times before cell phones, and I don't like them. I feel like they make us worse. I really do, and I feel like the worst parts of myself come out because of phones. I'm suspicious of people, I'm suspicious of what are you doing on your phone. You know, people behave on their phones in ways that they would never behave in life, and a lot of really disturbing and gross and dishonest things are done on cell phones, and it's so fucking easy. Also, intimacy is really corrupted. The fact that a lot of people now will know what a dude's dick will look like before they even meet him—someone that you might want to try to fall in love with. Before you meet someone you know what their penis is like. Like, that's crazy.

GR: It seems like teenagers get the breadth of the pain and suffering from Facebook and feeling the need to flash your titties to your fellow eighth grader. Like, Josh does not need to see your titties. Or he should take you on a date.

JS: And then show him your titties, after the date.