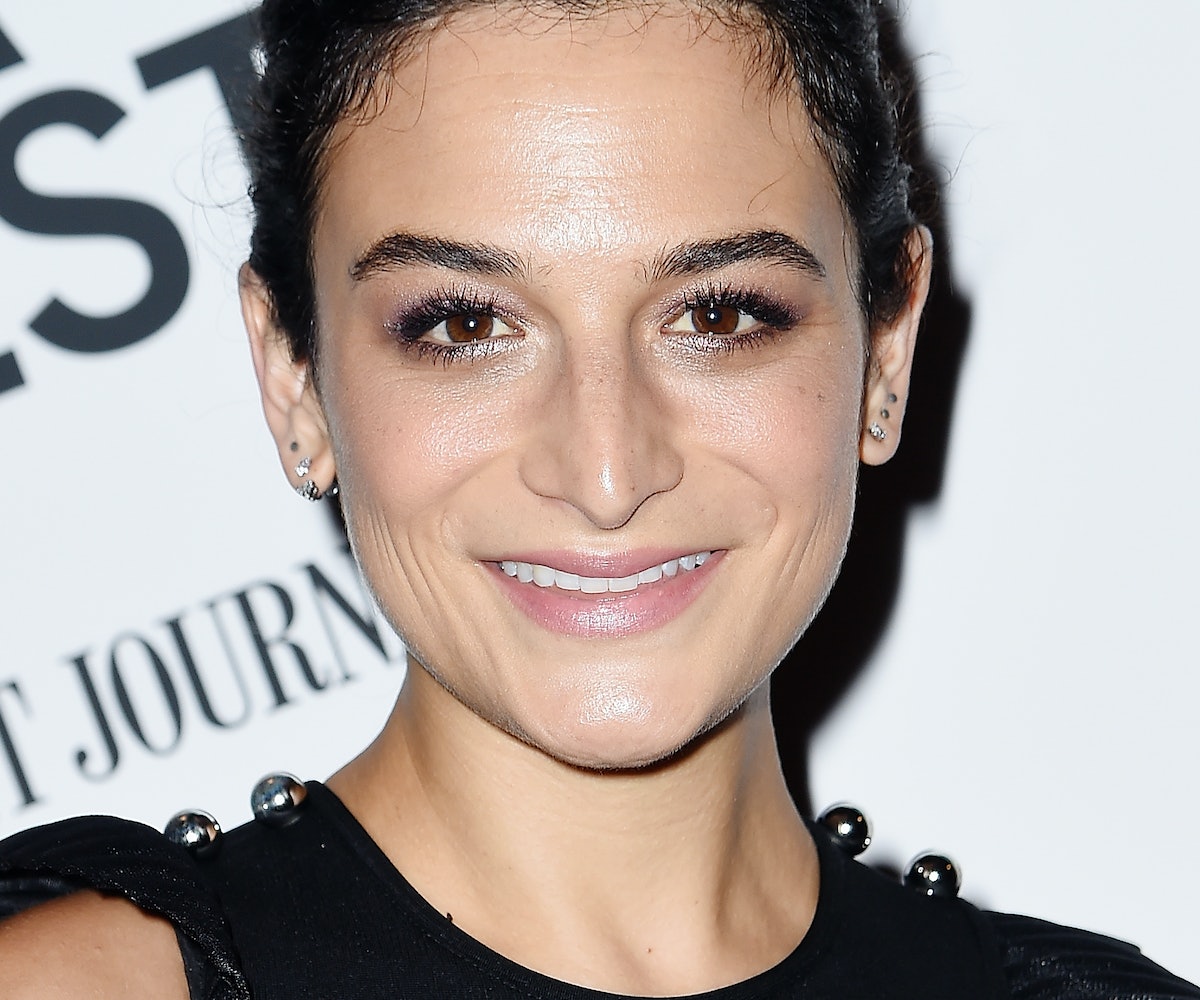 In the pages of every profile on Jenny Slate, you’ll notice a few recurring adjectives: honest, vulnerable, candid, brave. These are the terms used to describe the multi-hyphenate talent from Milton, Massachusetts. Of course, platitudes are platitudes. They’re reductive by nature, and therefore kind of boring. However, a different kind of dialogue occurred last week when Slate went on the interview podcast Talk Easy with Sam Fragoso. She was there, ostensibly, to promote her latest collaboration with Gillian Robespierre, Landline. On the heels of Obvious Child, this new film is a lovingly told story about two sisters (Slate and Abby Quinn) who discover that their father (John Turturro) is having an affair. Full of floppy disks and turtlenecks, it’s set in 1995 Manhattan and is driven by Slate’s biting, uproarious humor.

On the podcast, though, Slate recalled a different story of romance: a first date that she went on. But this wasn’t any kind of first date. Told in painstaking detail to Fragoso, who kindly provided the transcript, Slate—one of the best storytellers around—recounted an interaction so unbelievable, hilarious, and infuriating that you need to hear about it yourself. And if you’d like to hear the full, hour-long conversation with Slate, you can do so below. We highly recommend it.

So what happened on this date?

It’s hard because I did not act like I wasn’t having a good time, so that’s why I feel bad about it. But I was having a really bad time. I got set up on a blind date by the husband of my best girlfriend, and he set me up with a man that he didn’t know very well and she had never met. My friend Zach was like, “This is going to be a real blind date. No pictures, no last names,” and I was like, “Okay, fine,” because I’ve never been on an internet date. I also wasn’t very interested in dating. I’m just not there right now. So I was like fine, I’ll do it, but it actually took like a month for me to do it. The guy gets my number and he’s like, “Where should we go?” I’m like, “I don’t know, what do you think?” And then he’s like, “Uh, I don’t know, something normal like the Renaissance fair.” Which was like a joke, you know what I mean? He didn’t mean it. He wasn’t like a Renaissance guy. It was a joke. But for me, I am a comedian, so I was like, "That’s not a funny joke."

It was a weak bit.

Because it’s already been done. If he had been like, “I don’t know, do you want to go to the La Brea tar pits and scoop some tar out and give ourselves a facial and burn ourselves and then only be able to know each other?” I would be like, “Haa, what?! Okay.” I mean, something new is going on here. He basically did the equivalent of like when guys do “fat guy in a little coat,” and they act like it’s not a Chris Farley callback. It’s like, this is a joke that’s in our system, so you’re a little bit unoriginal or even worse, you don’t know you’re unoriginal.

Does he know it’s you?

I do think he knew that I was a comedian named Jenny. So anyway, he’s like, “Let’s go to the Renaissance fair,” and I call my friends, and I’m like, “I’m not going on this date.” And they’re like, “Oh Jenny, come on, don’t be so closed down, you need to get out there.” I’m like, “UGH, fine.” Then we have a series of text messages back and forth that I’m just kind of like, What is this? Is this what dating is like? I was with my ex-husband for nine years, then I was in a very serious relationship that was passionate for a year, and I’m like, I don’t know, maybe I just don’t know what’s going on. And he’s asking me these questions that I’m like, What. The. Fuck. Why don’t you just wait?

What is he asking you?

Like, “Where was the last place you flew on an airplane?” And I’m not a rude or cruel woman, but I was like, I don’t... dude... just wait. Sit me down, I’ll tell you anything, just wait. Just wait until Saturday.

Also, that’s the kind of question that is like, “I’m gonna go on the internet and search random questions to ask someone.”

Yeah, it’s not great. It’s a real speed-dating question. I would love it in other circumstances if it was like a page in Entertainment Weekly, you know? So then I’m like, “I made us a reservation at this restaurant, will you meet me there?” He’s like, “Yes, is it fancy?” I’m like, “No,” and he’s like, “Okay, should I wear something like this?” And he sends me a picture of a knight’s costume. Like from the Renaissance fair. At which point I’m like what the fuck, dude? Because I didn’t even jump on this riff in the first place. It’s not like I was like, “Yes, and I will wear my wench's costume and bring a cup of mead!” I’m just like... Heh?! What? Why are you doing this?

You didn’t respond positively to the bit.

I just don’t know about that. Is he gonna look like a barista from a Verizon ad? Like what Verizon thinks “hipsters” look like? So he’s like, “I’ll be wearing a blue shirt and a blue hat to match.” I’m like, he’s wearing a hat?! What the hell? And why does he already know? It’s 1pm. So I’m like Jenny, no, don’t be a c***. It takes you so long to pick out an outfit before you leave your house. Pick one out now and stick to it. So I pick out an outfit. I’m like, “I’m going to be wearing a multicolored skirt and a black shirt.” I go to the restaurant. I’m like, “I’m here, I’m in the booth. Where are you?” He’s like, “I’m just settling up at the bar. Be right there.” He comes around the corner inside the restaurant... this dude, and I’m not kidding, is dressed in full chain mail. He’s got a full authentic knight’s costume on, including a floor-length tabard, which I called a tunic and then he corrected me and was like, “It’s actually a tabard.” It was made of a thick, smoky blue suede. He had a crest, like a coin purse. It was authentic. He told me later he had rented it from the Russell Crowe Robin Hood movie. My heart sinks. My heart sinks because I was already worried that he was maybe going to be a dork—which is my own opinion of what a dork might be, whatever. That he was not going to be for me because of the humor. This, I didn’t even… I was shocked, you know? I’m rageful because I’m like, you asshole, whoever you are. You’ve now put me in a heightened version of a position that women are put in all the time. A man gets an idea of himself, puts himself in this narrative, drags a woman into it because he’s the focal point. Now you’re just dragged in against your own will, and either your choice is to crush his dreams and be a c***, or be like a dream girl by being positive and supporting him in this thing that you are not a part of and you don’t care about and is totally about him. It’s the worst.

Which is a lot on a first date, by the way. All of this.

So, of course, I pick option two because I don’t want to be mean. And this is also why I will one day be kidnapped, because I can’t say no. And why I often find myself in situations with people who don’t satisfy me because I don’t want to hurt their feelings. So I jump up, I’m like, “Oh my god, callback! Whoa, I feel so underdressed!” And I sit in the booth. I have a whole date with him. His chain mail is like getting caught on stuff. I am feeling feelings which I never even felt as a teenager, which are like, you’re embarrassing me. I’m mortified, and also just mad. He’s trying my pasta with the chain mail clinking across and stuff, it’s insane. I’m enjoying soothing him or something. I’m enjoying being kind. I’m enjoying not being totally freaked out, which by the way I also am. And I feel despair, because I don’t want to be alone forever and why am I here? So eventually, when I don’t feel like it looks like I’m running away to make fun of him, I go to the bathroom. I’m like, “‘Excuse me, sorry, I have to use the ladies’ room.” I go to the bathroom, I text like a bazillion people being like, “Yo, I’m on a date with this fuckin’ knight right now, okay? He has like a coin purse and chain mail and a tabard and suede riding pants and boots and stuff. And it’s major, it’s happening." I didn’t say where I was. So I go back to the table, he goes to the bathroom, at which point one of my friends who I had texted just happened to walk into the restaurant. I flew over to her like one of those women who has been kidnapped by a weirdo and has been kept in a basement for 10 years. And because I’m like a “good girl” or whatever, he’s like, “You’re a good girl,” and like takes me to the mall and I see someone from my church and they’re like, “Jenny, where have you been?” and I’m like, “WITH MY BOYFRIEND,” giving like SOS and they’re like, “Wow, you lost your tan, have you been inside for 10 years?” or whatever.

So I’m like, “DID YOU CHECK YOUR PHONE?” And my friend Mae is like, “What?” And I’m like, “Did. You. Check. Your. Phone?” She’s like, “Jenny, you’re freaking out right now, like what’s going on? No, my phone’s in my car, I haven’t checked it for like two hours.” And I see her gaze shift from me to slightly over my left shoulder. She’s like, “Jenny, I... eeh?” And I’m like oh, fuck, the knight. He’s like right behind me. I know it. I know he’s like right there. He comes up, he’s like [makes bulky metal sounds]. I’m like, “This is my new friend blahblahblah,” and Mae and my other two friends are like, “[gasps] Hey, what’s up?” No one even mentions his chain mail because it’s too weird. It’s too weird. So then we leave and in the parking lot, he’s like, “You know, this chain mail, as I said, is authentic, and it’s like kind of digging into my legs. Would you help me disrobe?” I’m like, “Sure dude, you got it.” At which point I take off the tabard, which as I said is made of a thick, smoky blue suede. It gets caught around his chest, I have to be like, “Arms over your head!” Like, lift it up, take off the chain mail, belt, coin purse. You know, hug him goodbye. I’m just at a total loss. I went back into the restaurant because I canceled my Lyft and was like, I’m going back inside to get drunk until I die, obviously. I went back in and was so weirded out that I think I ordered a whiskey vodka which is not even a drink.