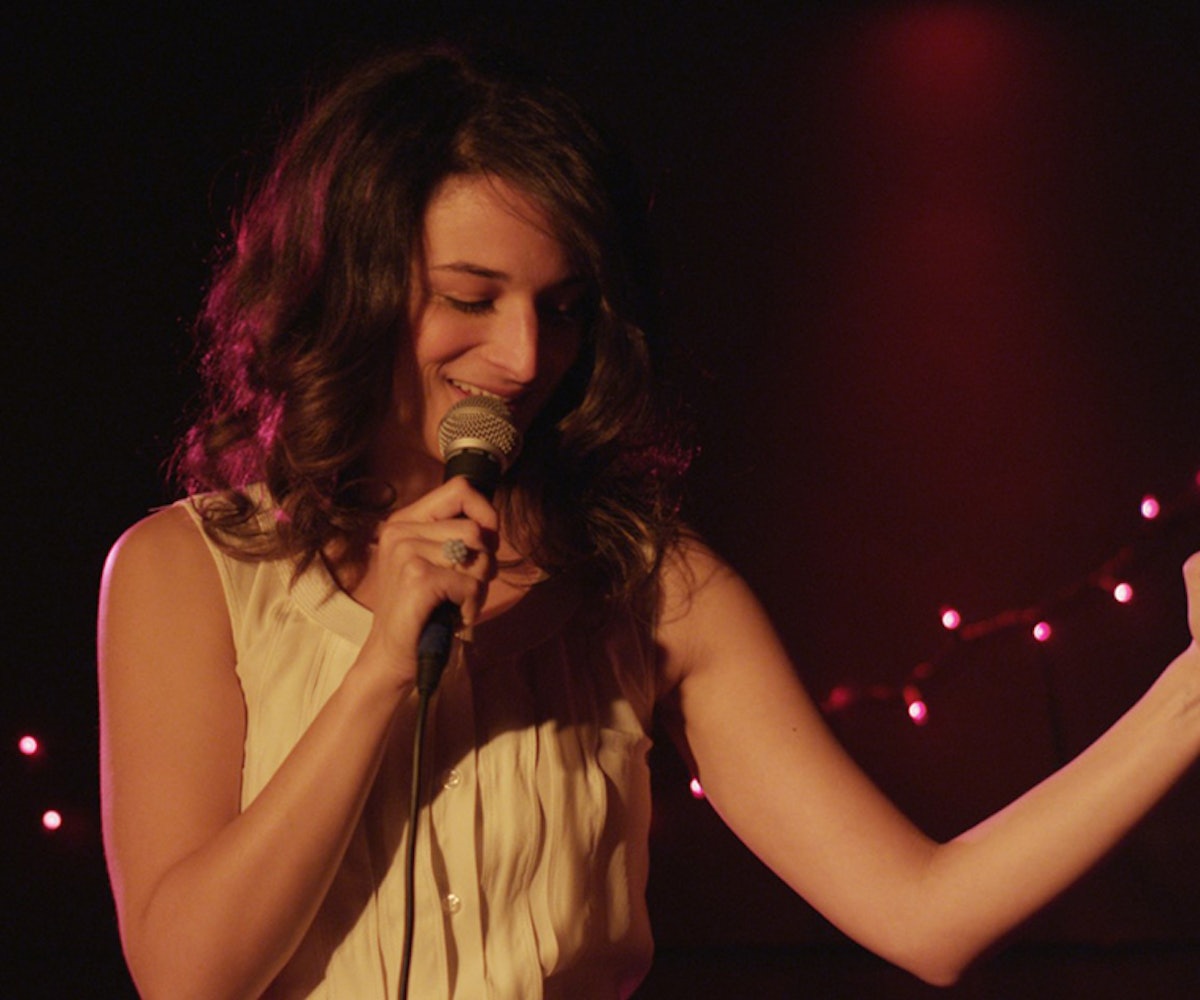 Even if you don't know her by name, chances are you'll recognize Jenny Slate. For the past few years the comedian's made TV cameos on Girls, Parks and Recreation, and Bob's Burgers--as well as voicing the internet's cutest shell, Marcel--and now she's about to get her well-deserved star turn in this spring's new movie,

It's dubbed an "abortion comedy," but the hilarious flick is so much more than that. It's uncomfortable, intimate, and true to life...and most importantly, 100-percent genuine. The fact that Slate steps into her character Donna (a recently-dumped struggling comedian, who finds out she's pregnant by a one-night stand) so perfectly is just the icing on an already-sweet cake.

Before the film's premiere, we hung out with Slate in Soho to talk about her first feature role, dealing with awkward moments onstage, and not laughing between takes. (Which, in a movie as funny as this one, is easier said than done.) Get the scoop from our newest girl crush below, then see

So this is your first full-length film role-- why did you decide to do this one?

Well, its not like there’s a s***load of movies coming my way. But, Gillian wrote this movie for me. To have a really funny smart woman write you a part where you're not just being funny, but you can show your vulnerability and have a variety of relationships on screen? It’s just really dreamy.

Did you get to improvise a lot in the comedy part? Did you bring your own jokes in to what she'd written?

The style of the standup in the movie was inspired by my own standup style…which a lot of people would call over-sharing or confessional, but I just tend to call it storytelling.[Laughing]  I just talk about what's interesting to me.

How did you even manage not to laugh during a movie as funny as this one?

I think I ruined a lot of takes. One time on Parks and Rec I like could not stop laughing and Aziz Ansari taught me that if you put your thumb and forefinger together it somehow focuses you. It’s some kind of mind trick, so sometimes I'll do that.

Was the filming as fun as it looked?

Yeah. The hardest part of making this movie was that it was over in 18 days.

Donna has so many awkward experiences doing standup. Could you relate to that in any way?

You know, Donna causes a lot more damage than I do at this point as a person. I do keep a close eye to make sure that I am comfortable and that other people are comfortable. I try and make that happen as much as possible, I realize my comedy is often blue and is very much about like, my body and whatever. But I feel like it comes from love and so people are comfortable, so I feel like I have more control over it than Donna does.

I would never tweet anything that was mean. I don't like that. I don't like tweeting things that are shocking just to be shocking. But I also think that, its a bummer cause I feel like the kind of humble brag thing has made people think that they can't talk about things that they're proud of. It’s something that I've encountered with this movie. Oh... and no nudie pics!

What do you hope that people take from this movie?

Regardless of gender, I hope that people are satisfied by the comedy and romance of it. Straight up, as a rom-com.

I thought it was very sweet.

I hope it encourages people to approach their unique stories and express them in thoughtful ways. I think the thoughtfulness and the intention of just sharing the human experience is what I hope people come away with.

If somebody offered you to do a movie based on Marcel the Shell...

I would say yes! We've just taken our time. It’s something so special and we don't wanna be overly precious about it.

What's next for you after this?

, its called Married it stars Judy Greer, Nat Faxon, Brett Gelman, and I am married to Paul Reiser. I'm gonna be on Kimmel on Thursday.

When you're stuck, and uninspired whats your cure?

Obvious Child is out today, June 6.