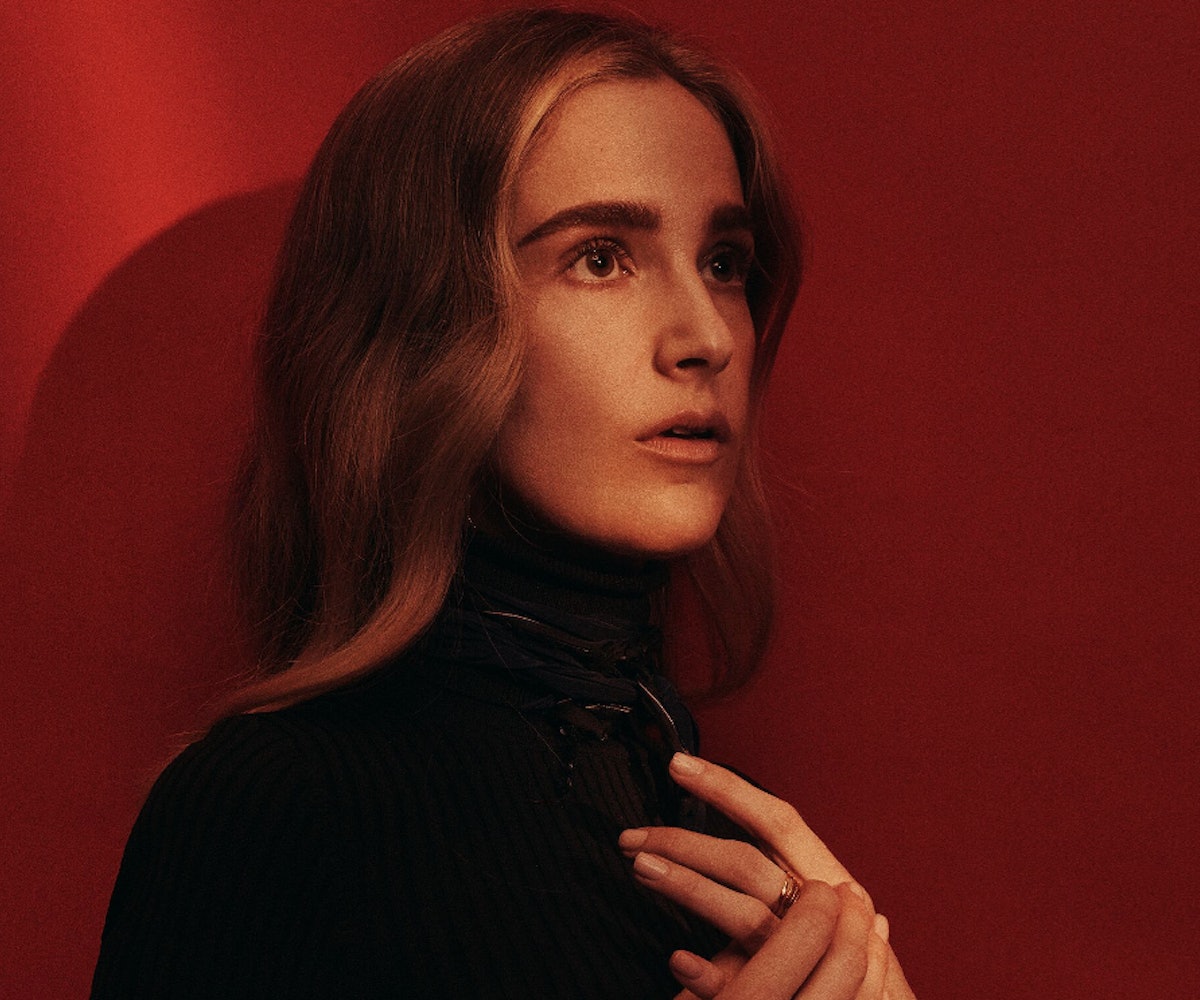 Jessica Yatrofsky's art often seems like an invitation. Through her photography—including, notably, her books I <3 Boy and I <3 Girl, which explore themes of gender and identity and liberation in a provocative way—Yatrofsky addresses body politics in a compelling, conversation-inducing manner. And now, with the limited-edition release of her poetry book, Pink Privacy, she brings that same artistic viewpoint to a new medium. (She has also just released a video for her song "Cunt Keeper," made in collaboration with VR artist Lauren Moffatt.)

Tomorrow, Yatrofsky will perform in an immersive pop-up performance at Miami's Art Basel, and, in anticipation of that, we spoke with the artist about her recent ventures into poetry, what privacy means to her, and... vaginas.

You're well-known as a photographer and a visual artist, but this is a book of poems, so I wanted to talk to you about your interest in writing.

When I introduce myself, I introduce myself as a visual artist. That is confusing to people sometimes, I think, because they want to really identify what it is that you do. But as a creative, I feel like that is very limiting, and I see myself as allowing ideas to dictate the medium. I was trained formally as a painter, but as I moved through my experiences as an artist in different modalities, different training, up through college, through graduate school, I was investigating ideas through many different mediums and picked up skill sets along the way. And I think writing is one of those things that... it’s sort of one of the first things, after reading, that you learn to do as a child. When you start doing creative writing in school, it’s very much about your imagination and creativity, and then, for some people, there’s a catharsis because you’re expressing something.

For me, I was always visual, but I loved creative writing. I used to write a lot of poetry when I was younger, and I had gotten out of touch with that. And when I moved into the college years, all of the writing was academic, and I didn’t have time to really keep a diary or do any sort of writing that I would consider as creative. And when I started to write this book, it was if I was getting back in touch with my former creative writing self, and that was so empowering. People approach me in this serious way because of the subject matter that I tackle in my visual art. So [when they do], we’re talking about body politics, we’re talking about gender, we’re talking about the nude form. All of these sort of very heavy topics. So when you think about the visual art, there’s a directness to it that is heavy, but then when you read Pink Privacy, there’s also a directness to it, but you also get to see my sense of humor.

[But] it’s not this different person writing Pink Privacy. I am the same person, with the same sense of humor, and I think this particular project highlights that aspect of my personality a little bit more. Because Pink Privacy is a self-portrait in many ways that the photographs are not. The photographs are... you can see what I care about, you can see me in them, but I don’t necessarily feel like I am always representing myself in a portrait of someone else.

It’s so true that it can be so limiting, the way that most people ask a creative person to define themselves by whatever medium they’re either working in at the moment or better known for. But it’s fascinating to think of the way working in those different mediums, how the end products all show different sides of you as an artist and person.I feel like artists, specifically ones that I admire—and don’t ask me to list them right now, because that will take me down another thinking path—create worlds, and I think that we should remember that as artists, and I think that that would help to lift these limits that we place on ourselves, especially if you’ve gone to art school. They really place these limitations on us. And also think of the way we treat people in pop culture and the media. We criticize people that jump genres, but I think it’s beautiful because they’re sort of opening up the possibilities of their limitlessness of expression. But what I like to think about is, again, my ideas dictating the medium. And personally, if I like somebody’s music or I like them as an actor, if I’m just a true fan of them and who they are as an artist, I am curious about their other pursuits. So when I think about that in relation to Pink Privacy, [it] is another extension of my creative process today.

Speaking of how artists create their own worlds... Even the title, Pink Privacy, implies a secretive space and something that’s discrete from everything else. So I wanted to talk to you a little bit about this world you’ve created and what that means to you, and also a little bit about what the title means and what the idea of privacy means to you. In the current political landscape, there’s a lot of stuff that you can go into and meanings that you can draw from this and gender politics just based on the color pink. But, just to sort of sum up where Pink Privacy came from, for me, is that I have a room in my apartment that used to be an office, and I had always dreamt of turning it into a closet. And when I moved my studio, I had that opportunity to create that space, and I’m very into the idea of having a space where you can go and reflect and sort of make it your own. Have a little shrine, just a place where you can populate it with the things you love and care about and give gratitude and just be surrounded by beautiful things.

When I was in college and in art school, the idea of me embracing the color pink felt antithetical, in a lot of ways, [because I was] like, everything’s black, everything’s masculine. I wanted to be one of the guys. I wanted autonomy the way that I saw men having it. And when I got into graduate school, I realized that I don’t have the same privileges as men do, and during this process, I had been sort of rejecting these things that I could have either liked or not liked just based on my own interests, not because I was going against this idea of femininity as a color. So, for me, I've reclaimed the color pink in my 30s and being like, “You know, I really like that, I’m going to get that, I’m going to buy that." I just wanted to see that color more; I wanted to bring it into the fold of my life again. And I also feel like it is this nod to my mother, also, and keeps me in touch with her somehow, because she loved that color so much, and it sort of defined her femininity. And those are good memories, and I feel like our experiences with the feminine, if they’re experienced firsthand from your mother, that’s something really sacred. These are things that, off the top of my head, I think of when I think of pink. But the whole privacy part of it is that I started calling [that space] “pink privacy” because it was pink and it was my private space, but it has a double meaning because what’s in the book is also private, but I’m making it public. And the other meaning is that it is a sort of reference to the vagina because it’s pink and private.

It definitely is. Speaking of vaginas, obviously, the poems have a high level of sexual frankness. Were there any points where you felt like you were revealing a lot? Typically, your art focuses on other people, but this is more interior.Yeah, I think it’s important to point out. When I started writing, the poems were writing me, because I had no intention of publishing a poetry book or making these words public. They were personal, and I feel like I just needed to get it out on paper and not judge the process. And as I accumulated so many poems, I was amused by what I had written, so those more amusing ones, I would share with my girlfriends, and they would just be dying laughing, like crying. And I thought, Oh, there’s something interesting going on here. Maybe this is something that could be shared, and maybe this is something that other people could relate to.

When I started writing this, I had no intention of anyone even reading it. It was just cathartic for me to get it down onto paper or, you know, iNotes. So I feel like there was no self-consciousness when writing it, and that’s what I think a lot of people have connected with. When I did decide, "Okay, I’m going to publish this as a collection," I purposely did not go back through and edit these poems, because I wanted them to exist as direct and raw as the way they exited me. And so, I feel like that in itself for me was a bold move, a bold statement, and just was so empowering. I mean, the copyediting that occurred for this book was like, “Oh, where should I put a line break, and where does there need to be a comma.” There was no changing of the content, there was no milling over different words, it was like, “Let’s just figure out how to place this.”

How did you feel about the final product?Once I got the physical copies back, and even now when I flip back through it, I was like, “Oh my god, I really went there.” It’s almost like I’m reading it through someone else’s eyes, and sometimes it freaks me out that this and that was said, but I think that ultimately, it’s this empowerment piece. If we’re looking at it as another art piece, this is an empowerment piece, I think, and it’s a self-portrait, so it’s a directly-from-the-source thing, experiences that I have had being expressed.

And I think it’s a little bit different because I feel very excited about Pink Privacy in a way where these are my experiences, these are things I said. If people want to approach me about these things, they can feel free to do so. Because I wrote all this, these are my words, this is my expression, and this is my contribution to this revolution that we’re in right now, and I feel very excited about that. And this also opened up the opportunity to bring more women in and have them also perform their work. Because when I first wrote this, I was like, “I’m not going to read out loud and perform, and do stuff like that.” Again, placing limits on myself. And I thought, You know, I’m going to allow these experiences to come into my life and just say yes to them because I don’t know where it can lead. So when I was invited to read some of this writing, I thought, Yeah, why not, let me try this. And it was really mind-blowing to discover a community of women that were embracing of my personal expression as a poet. And that’s what started me with the New York Fem Factory, just hosting events that supported other female writers and performing artists.