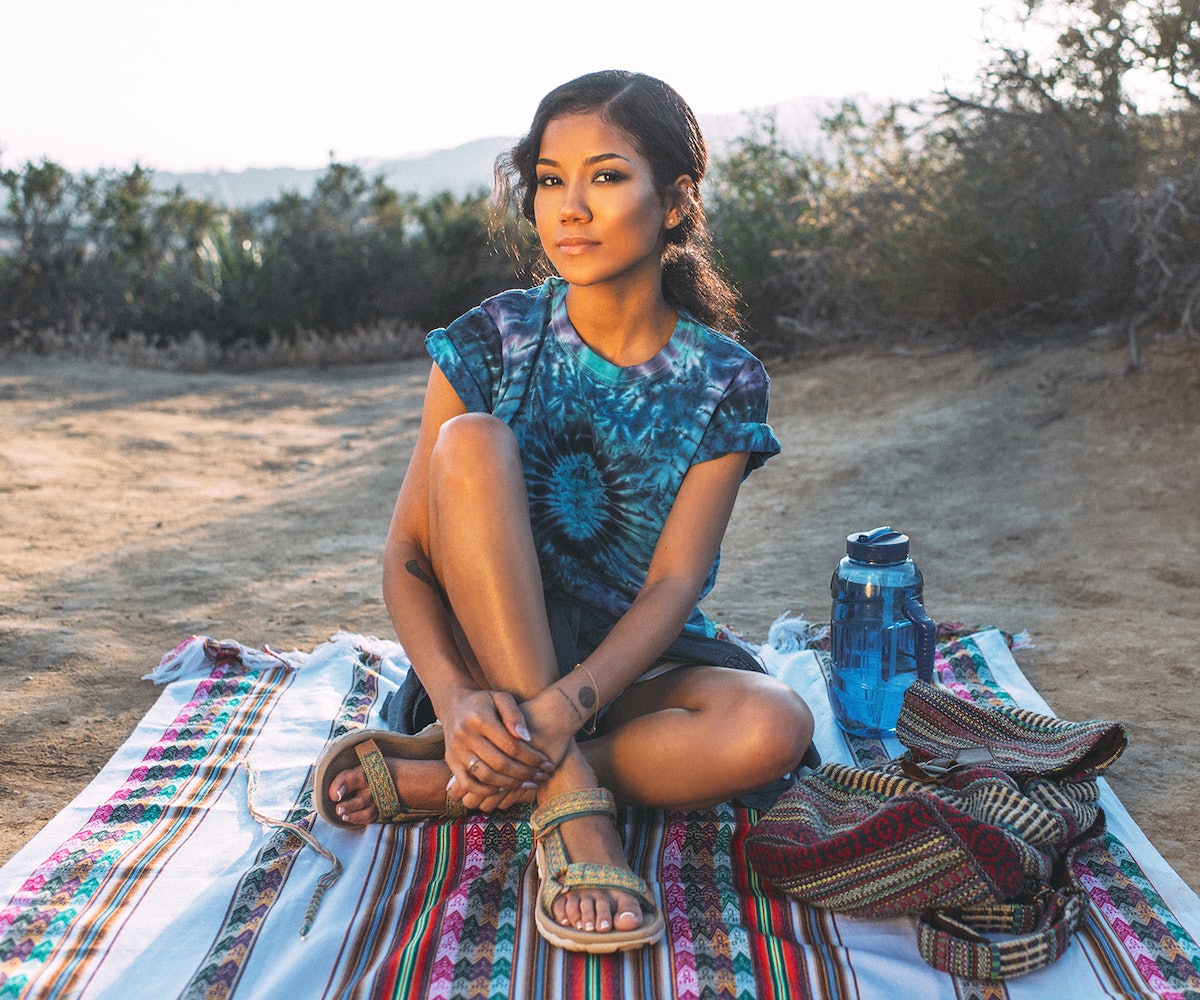 Teva footwear has always evoked a sense of laid-back chill and, since its beginnings, has established itself as a brand that values being in touch with nature just as much as it merits creativity and independence. So when it came to selecting a partner for its first-ever celebrity collab, it came as no surprise that Jhené Aiko would fulfill that role, considering that the three-time Grammy-nominated singer-songwriter’s whole persona is crafted around everything that Teva stands for. The limited-edition collection, that launches today, is comprised of Aiko’s take on the Original Universal, Hurricane XLT, and Flatform Universal sandals, with designs that reference the friendship bracelets that the artist used to make with her siblings growing up. With three styles, the collab offers the perfect options for your lifestyle, whether you prefer to spend your time chilling, hiking, or rocking out at festivals.

Of course, that's not all that Aiko's been busy with. After the release of Twenty88, the bedroom-y album and short film that she created with Big Sean, we couldn't wait to see what solo work she had up her sleeve. Fortunately, she has a "special project" on the way—she told us all about it, her Teva collab, and her first encounter with her idol John Mayer, here.

What made you a Teva fan?

I went to Maui a few years ago, and I had just started getting into hiking, and I wanted to get hiking sandals because in Hawaii, it’s hot and tropical so I didn’t want to wear a hiking boot or tennis shoe. I went to the store and they suggested Teva, so I ended up buying a pair. I went on a hike in them, I went out to dinner, and ended up wearing only my Tevas for the whole trip. And so, to me, they were the perfect the sandal. They approached me about the collaboration, and it was just perfect.

It definitely seems perfect, considering that you’re so in touch with nature.

Yeah, I think especially for this generation, the internet generation, we’re always on our phones, and I think that Teva really encourages us to explore and be outside.

How do you apply that to your daily life?

I take time out of every day to go outside, even if it’s just for a little while. I love staring at trees [laughs] and just listening to the birds and the wind. It’s like a form of meditation for me. I do it even if I just have a little time during the day; I make sure that I connect with outside at least once a day. And at night, too—I love following astronomy news about what star or planet is visible that night. Hiking is my choice of exercise because it’s outside and you never know what you’re going to see on a hike.

Why did you decide to incorporate friendship bracelets into the design of the sandal?

In the design process, there were so many cool things to choose from. With Teva, they literally have everything you can think of. I did want to keep it simple and keep it true to myself, and friendship bracelets are definitely something that I love to make and love to share. And for me, being able to offer it to people that listen to my music—and even people that don’t—it’s just like a friendship sandal [laughs] because I really wear mine, and I’m excited for other people to have them and to experience the versatility of them. I literally have a dress that matches the Tevas so perfectly—I didn’t even realize, and it’s my favorite dress. Now it goes with my favorite sandal! So yeah, I think that the friendship bracelet thing is very true to myself, and I wanted the sandal to be also.

My mom gave me a friendship-bracelet-making book when I was in elementary school, and it just became my thing. I was so into it because it’s so calming. It’s something that I like to do when I’m thinking about something too much. I used to ask all my brothers and sisters and friends to pick their favorite colors, pick a design, and then I would make them a friendship bracelet. And then as I made the friendship bracelets, I would sort of bless them with good luck and good intention and love. I made up my own little rule as far as what they meant, or I would tell them to make a wish and when it falls off it means that wish is going to come true. So it just became a thing. There’s so many that I never got around to finishing. At one time, I would have like six bracelets that I’d be working on. But yeah, I still do it to this day—I actually made a bracelet that matches the Tevas exactly, in that color.

Where do you imagine people wearing the sandals?

The Flatform I would say is for festivals or dates—it can be a little more dressed up. It’s probably my favorite because it makes me taller [laughs]. The Original Universal is more for every day. It’s flat so it doesn’t give much height. The Hurricane XLT is for hiking. They’re so comfortable and, like I said, when I was in Hawaii, I didn’t take mine off. I went hiking, I went to eat, I went to the beach. I think that’s the cool thing about Tevas, that they’re all-purpose. There are three styles in my collection but you wouldn’t have to get each one. You can wear them at any time. For summer, especially, they’re the perfect shoe. There're so many different colors in there that you can wear. There're so many things that can pick up the color. I’m excited to see how people wear them.

Read the rest of the interview after the jump.

So it’ll be similar to Twenty88, in that it’ll be more than just an album?Yeah, that’s why I just want to call it a project. An experience. I would say, it’s definitely bigger than anything I’ve ever done. Writing has always been my real passion. If I wasn’t gonna do anything else, I’d be writing and creating—and I feel like writing is creating. This is why it’s taken me so much time. Nothing I do is rushed. How I work is very grassroots, with a small amount of people that just really care about what I’m trying to do and my vision.

I saw the Snapchat video with John Mayer that you posted on your Instagram. I’m sure you guys were joking about the “John 3:16” thing, but what have you guys been working on together?[Laughs] He’s helping me with some music. My publisher helped set that up. I’m a die-hard John Mayer fan—there're only like three people that I’m die-hard for, and he’s one of them. We met a while ago and had a session, and I was really, really sick. It was bittersweet because I couldn’t give all my energy to the session, but I knew that I had to be there because I didn’t know if it would ever happen again. So during that session, I worked on some stuff and he was like, “Let’s do more.” The day that we did the Snapchat is when we had the other session. He’s so fun. He’s one of those people that—because I’m a fan, it’s really easy to be disappointed in someone that you are a big fan of. I don’t like to have expectations, but I do look up to him, so it would really suck if he was mean to me, or just not personable. But he was everything and more. He was so funny, so nice, so talented, and so real that it was just a really, really good experience. The group obviously was a joke, but you never know.

Who are the other two people you’re a die-hard fan of?Kid Cudi and Tupac.

I loved that photo shoot you did! The one where you re-enacted iconic Tupac pictures.That was fun! That was really, really funny because we were pulling up each picture and were really trying to get it on the head, and at one point I was like, "You know, it still can be me. I’m not Tupac. I’m not trying to say I’m Tupac. I do want the images to mirror his, but I do want to bring my own thing to it."

Considering that you were part of an early wave of alternative R&B, what’s your opinion of the state of the genre today? Are there particular artists who you think are standouts?I think R&B right now is [comprised] of like, all of the kids who grew up listening to everything—myself included. The lines are blurred. I did grow up listening to ‘90s R&B like Brandy, Mariah Carey, and TLC, but then I was listening to Tupac and Biggie, and then the Spice Girls, and Alanis Morissette, Fiona Apple. I think that you can hear all of that in my music, but it’s titled “R&B” because I’m young and I grew up in an urban area. From me to PARTYNEXTDOOR, our music doesn’t sound the same, but it’s gonna be categorized as R&B because we’re urban and the songs are about love. But—especially because of the internet—we’re exposed to so many different sounds and so many different styles of music that it’s all just coming together. What R&B stands for is “rhythm and blues,” and we all have a sad story to tell, we all have a story of love lost or love gained, to some rhythm, so I feel like that is what is happening right now. But I’m really waiting for Frank Ocean. [Laughs]

Same!He uses different sounds and instrumentation that, to me, is the best example of the R&B that we’re creating right now. It’s getting harder to prove the artist because, right now, there're so many songs, instead of artists who have proved that they have this discography of this sound. Everyone is more so on a wave, and then they just hop around to whatever producer is hot or whatever sound is hot. But Frank Ocean is one of those people that, even when he writes a song for someone else, it has that distinct sound. So, yeah, I’m excited to see what else people are experimenting with.