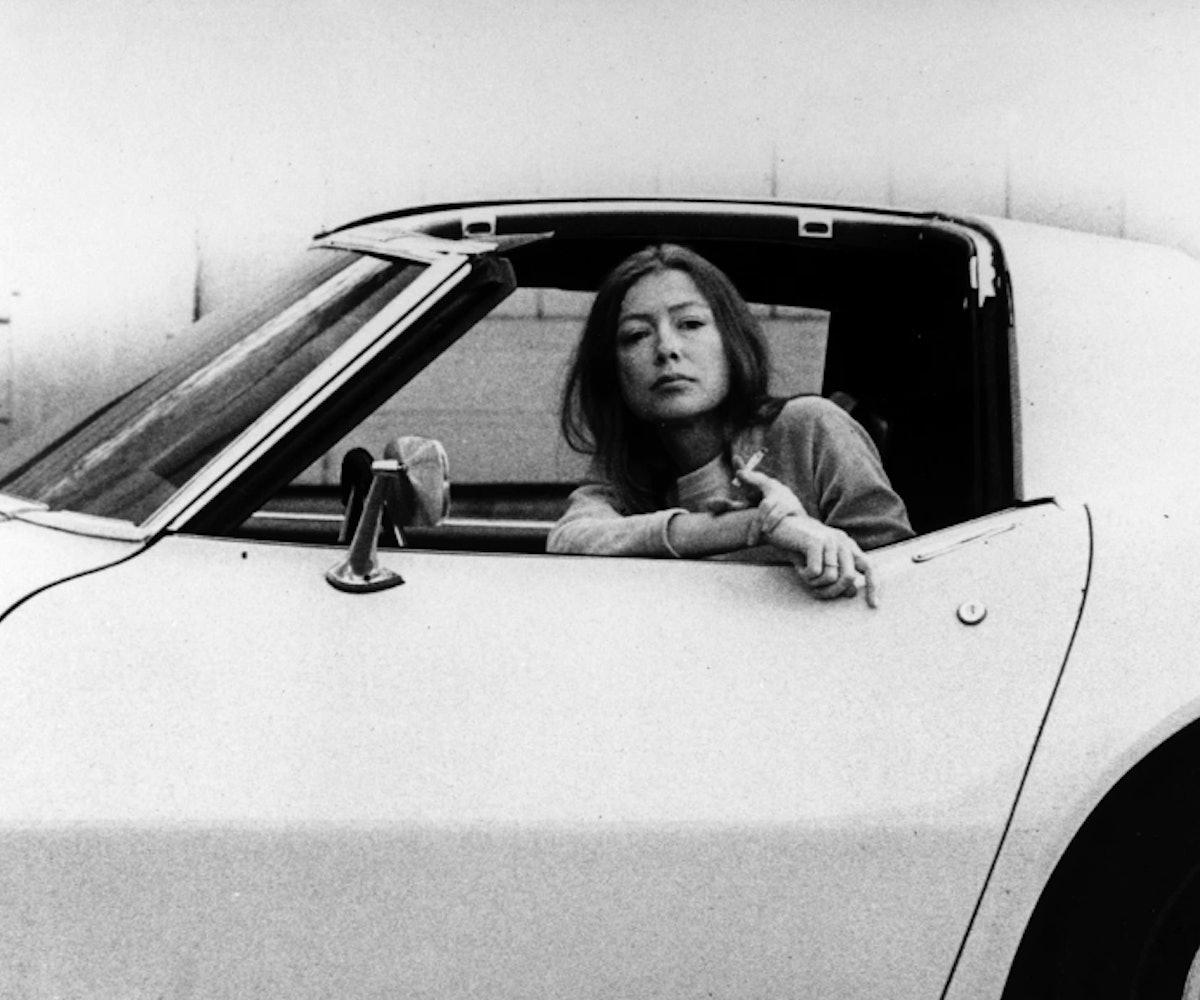 To most of the world, Joan Didion is a generation-defining writer who chronicled the seismic cultural shifts of the ‘60s and ‘70s with a clear-eyed precision that felt both personal and universal. Later in her life, writing about the deaths of her husband and her daughter, Didion became a symbol of grief to many, a symbol of how to, if not overcome devastating loss, then at least learn to live with it. But then to actor and filmmaker Griffin Dunne, she was always just Aunt Joan.

In 2011, Dunne, whose uncle John married Didion in 1964, shot an extended trailer for her memoir, Blue Nights. It was during that experience that Dunne realized a documentary about Didion didn’t exist—and that if anyone were to be granted the access to Didion necessary to tell her life story, it would be him. Six years later, Netflix has just released Joan Didion: The Center Will Not Hold, Dunne’s intimate look into the remarkable life of one of the most revered literary figures of the last half a century. We spoke to Dunne over the phone recently about his approach to making the film, Didion's connection to California and New York, and why the renowned writer has stayed out of the country's toxic politic debate.

Was your goal to create the definitive Joan Didion documentary, or was your focus more narrow going into it?

I knew that I would be making the only Joan documentary, so it had better be definitive. I was aware I was making this because I was the only one in the position to be able to do it, and I felt a responsibility to her fans, which are a passionate group of people whose lives have been influenced by many of her essays and what she represents. So I was always aware of the burden of responsibility of getting it right. You gotta get it right or you get it terribly wrong—there's sort of no middle ground there.

I was surprised to a see a running time of under two hours. Was it difficult to document such a rich life in that amount of time?

I went from feeling what apparently every documentarian feels before they start editing: that they don't have enough. And I went from thinking that I don't have enough to that I have way too much—that I could easily make a series out of this. And then I would have been able to cover all of her work, all of her books and novels and the non-fiction pieces. But that wasn't my goal, so it was a constant process right up until they pulled it from my cold bare hands. I was cutting for rhythm as much as I was for content, and hopefully, at the end of the hour and a half, the audience feels that they witnessed a life lived.

What was her reaction when you first pitched her the idea of a documentary about her life?

It was two sort-of words. When I realized no documentary had ever been made about her, I asked her if she would let me make a feature film, and she took a slight pause and went, "Uh, ok."

How much time did you spend with her during the making of the movie?

The sit-down interview was over the course of a whole day. And then the other parts were going to locations or her walking through the park and us going to meet the president. Sometimes I would just bring a crew, and we’d be in her apartment, and she was just cutting cucumber sandwiches, and I knew I would end up using every frame.

Did you learn anything new about her in the course of making the documentary?

When she said, "Uh, ok," I started to read in order every word she's ever written. Having been her nephew, I never did that. I read her books, but with the idea that I'm gonna make a movie about the person that wrote this. From that, I gleaned a lot of insight into her character. She is famous for writing about California, I saw why—I saw where that was coming from. When I look at Joan, I see the ancestors that came across and homesteaded in Sacramento. She had a frontier character and mentality that I don't think I would have been as attuned to, had I not made the documentary.

When you were growing up, was Joan the iconic figure she is today?

Yeah, she was pretty much iconic for the majority of my life. Particularly when Slouching Towards Bethlehem came out; there was a real change in the air about her sudden fame. I was a little kid when she was writing for magazines, so I knew both she and my uncle John were incredibly impressive people. John would write about the grape strike, and if we had grapes on the table, he'd throw them in the trash. We would read her and John's columns, and we would learn about what was going on with them. We didn't know they were getting a divorce until we read about it in writing. So she was already a deeply impressive person, but she became a deeply impressive famous person when Slouching came out.

When asking about the death of her husband and daughter, did you have to be careful to not dredge up painful memories?

I didn't have to be careful because she, of course, knew I would be talking about this. I think she would have lost respect for me if I didn't ask. She knows that was my job.

Joan is somehow the quintessential Californian and New Yorker at the same time. What is it about her, that she can symbolize these two places simultaneously?

I think both she and John were very location-conscious. It affected their work and the way they saw their world. If any of the locations dried up for them, it dried up on a creative level. So they had an agreement: If anyone feels that way, they should both leave, and they would. So they moved quite a bit. New York was probably the longest place that they stayed, and I think New York, for both of them, was really like a homecoming. That's where they both got their following. And I think while they wanted to continue to be in Hollywood writing movies, they wanted to get in touch with their literary roots and their literary friends.

Why do you think New York suits her at this stage in her life?

I think it's where her closest friends are. There are no more jobs left in California, and everyone eventually sort of migrated to New York. So I think it's that, but I also think it's where she's had the most memories—it's the apartment she lived in with John and Quintana, and it's virtually unchanged. She lives right off [Central] Park, and she goes there every day. She just got a dog that she loves. She's got a really full life here, and it's with friends that have been with her; she has company four nights a week.

Joan has written about politics many times throughout her career. Why hasn’t she weighed in on today’s political climate and Donald Trump in particular?

The 24-hour news cycle plays in her kitchen—she certainly keeps up with what's going on in the world. I haven't talked to her in great detail about this, but I think that someone like Trump is just a less interesting figure for her to weigh in on because there's really no subtext. He's so impulsive and everything comes out of his forehead; what she specialized in, when writing about politics, was the message that politicians were trying to send and what the message really was. There's no there, there with Trump, and he’s not even consistent. It's sort of the reality TV aspect that I don't think holds much interest for her.