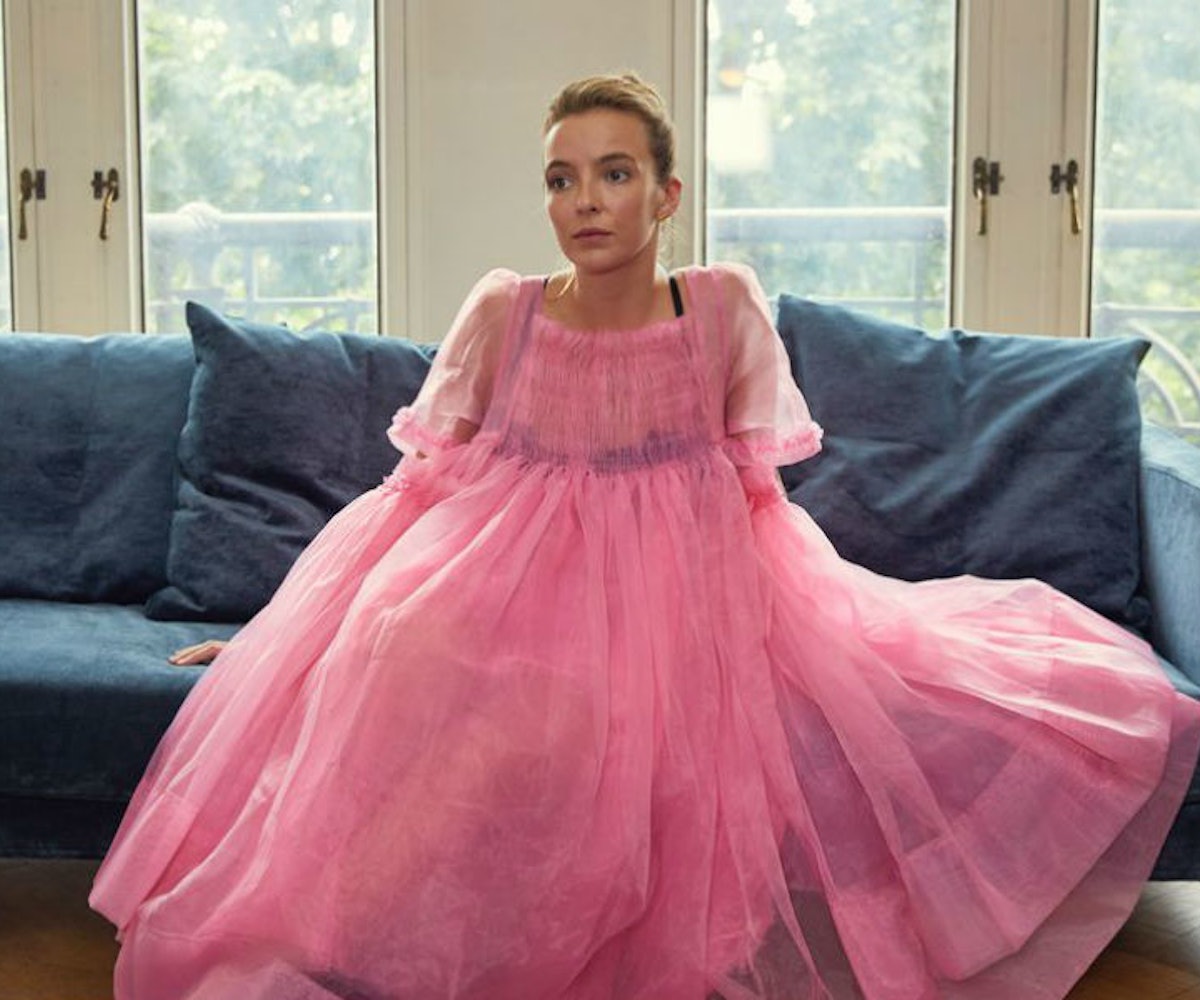 I tuned in to Killing Eve for Sandra Oh, but I wasn't prepared to fall so hard for Jodie Comer. The 25-year-old actress plays opposite the titular detective Eve Polastri (Oh) as Villanelle, a character you find yourself rooting for one minute and despising the next. She delivers lines like, “I'm going to kill you nicely. But then I'm going to make a mess of your body afterward so it looks worse than it is. Just letting you know, okay?" in a way that makes you think she's doing her victims a favor. Which is sort of crazy, because she plays a cold-blooded killer with a lack of remorse. And yet, with the assistance of Phoebe Waller-Bridge's brilliant writing, Comer has turned someone we should fear into someone worth respecting. Together, she and Oh engage in one of the most complex, clever, and exciting cat-and-mouse chases to appear on the small screen.

Ahead, we chat with the talented Comer about Villanelle's relationship with Eve, how she detaches from being a killer once the cameras stop rolling, and about that final scene of the season.

How did you come to work on the show?

I initially got the episode sent to me by my agents and, as soon as I had seen Phoebe's name as the writer, I was just like, "Oh my god!" No matter what it was, I knew that it was going to be pretty special. Then, I had an additional audition in London, then they had a recall in L.A. I found out a couple of weeks after that I had gotten the role. It wasn't actually a grueling process. A lot of the times with these big shows, there's kind of a lot of rounds of auditions that you have to go through. This was a really nice process actually.

What drew you to Villanelle as an actress?

I think it was the fact that she kind of went against every stereotype. I thought she was going to be the femme fatale, mostly using her sexuality to get herself out of situations or gain what she needed, and I feel like Phoebe's approach to her was really fresh and original, and there was a lot of humor in her. I think there was a lot of realism, even though there is a lot that we can't relate to about her, whether it be emotionally or what she does. I feel like she has a lot of humanity in her and I think that enables people to relate to her sometimes or find her funny. I didn't feel like I had ever read a character like her before, especially in terms of being a female assassin.

One part that stuck with me is when she's about to kill Frank and he begs her not to kill him because he has children, and she goes, "I don't want your children." When he explains what he meant, she goes, "This will give them something to bond over." And I felt that was so telling of how much of a sociopath she is.

Yeah, I love that line, because I just think that she hates children, which is what I think is so nice about when she gets stuck with Konstantin's daughter, and she finds the kid annoying, but she actually is like, "I kinda like this kid." It's a nice contrast.

I want to talk about the different accents you take on and the different languages you speak throughout the show. You are a master of them all in the show, but I know you only speak English in real life. What kind of prep work goes into something like that?

I have an amazing voice coach, Paula Jack, who helped me so much with all of my accents and languages. But, it's kind of amazing when you're a part of a TV company—they have all of these contacts and there is actually an organization around production that specializes in sending actors and actresses voice coaches. So you will have someone who that is their native language, and they will speak the lines out for you.

I had a lot of voice clips sent to me in normal speed and really slowed down for me to try and get to grips of the vowels and stuff. Then, I wrote the words out as they sounded rather than how you spell them, just so that if I was ever on set and I needed a quick glance at my script, I knew the pronunciation. We shot in Tuscany and I had to speak Italian and we had a lovely Italian crew over there, so I asked them, "Look, if I'm pronouncing it incorrectly, could you just let me know?" I'd rather someone told me. So, they were really lovely and helpful and gave me a nudge when I needed it.

Those different languages are a part of her different personas that she takes on. It's kind of like you're an actress playing an actress, and I'm wondering what was it like to live with Villanelle for an entire season? How did you detach from her at the end of the day?

It was actually really easy to detach from her because I had so much fun playing her. I know that she is dark and twisted, but she was honestly just so much fun to play. It wasn't as if I was going home and tormented by her at all. And that is exactly how I viewed her when I read for the role—I thought she was an actress. And I imagine that she goes home and she does her homework and she learns her lines in a sense of: What am I going to say to this person? And she takes off her shoes and makeup. So, that was actually how I thought of her sometimes. Honestly, she's just so naughty and mischievous that it's hard not to love her and enjoy her. Some of the days that were more physical, then maybe that would be a little different. Other than that, she's the best.

Villanelle's relationship with Eve is very cat-and-mouse, but at times, it's almost unclear who the cat is and who the mouse is. Was that something that was enticing to you coming into the show?

Yeah, I think so. I think it's something that me and Sandra are still working through when we're doing those shoots because they don't spend a lot of time together, so when they do, they seem quite intense. I think we're still trying to figure out what the infatuation is and what it is that has kind of thrown these women together.

It's another reason why I love that scene in episode five, when they meet for the first time, because the power is constantly switching between the two of them, and I think that is the first time that Villanelle realizes that this woman isn't as naive or gullible as she thought, and she clearly knows a lot more than Villanelle thought she did. So, I think there's a lot of intrigue and curiosity, and I think that she is attracted to Eve, sexually and otherwise. I think that Villanelle deep down—like deep, deep, deep down—wants normality and she just wants someone to sit on the sofa with and watch a movie, and I think she craves that. She sees Eve in this happy marriage and with this job and living this normal life, and I think Villanelle wants that, and so she's like, "I just want to have dinner with you." But Villanelle being Villanelle kind of gets in her own way when it comes to being normal. Whatever normal is.

That idea of her just wanting to be normal is also displayed in the final scene of the season when she finds Eve in her apartment. That's probably one of the most confusing, thrilling scenes of the season, which is saying a lot. What was it like to shoot that?

It was a funny one because I remember there were a lot of rewrites for that scene. Up until, like, the day before, they were trying to figure out where our characters were and also how much Villanelle actually lets her guard down because she doesn't trust anyone. But, then again, she lets her guard down in that scene and allows herself to get so close to Eve, and [Eve] gets [Villanelle] right where she wants her. I think that's a lesson Villanelle is going to have to learn from.

But, it was brilliant. Any scene I have with Sandra is just amazing because our characters talk so much about each other, but it's very rare that they're in the same room or that close in proximity, so it's also kind of electric when we get to do scenes together. And it was actually the final scene that we shot of the whole season, so we wrapped after, and that's always kind of sad. And obviously, you don't know [at the time] if you're coming back for a Season 2.

Now that we do know the show's getting a second season, what do you hope happens for Villanelle in her next chapter?

I hope she gets her sass back. When we see her at the top of the series, she's kind of prissy, isn't she? She has her apartment, she's living this extravagant life, and then compare that to the end of the season when she's lost everything. And I don't think she's lost her mojo, but it's just like, Come on, get back on track. I think she's lost her control a little bit.

I really want to see a lot more of the disguises she has. When we did Season 1, I had a list of different colored wigs that I wanted to wear, and we obviously didn't get through them all, so I hope she has more. I'm excited to see what happens with her relationship with Eve and how that progresses, and also with Konstantin more, because he was kind of the only person who she was vaguely close to and trusted, and that got tested a little bit, so I'm wondering if they come back from that.

I mean, it was just so exciting getting a new episode every single time because I could never, ever guess what she was going to get herself into or who she was going to meet, so I'm just super-excited to read more of the script.