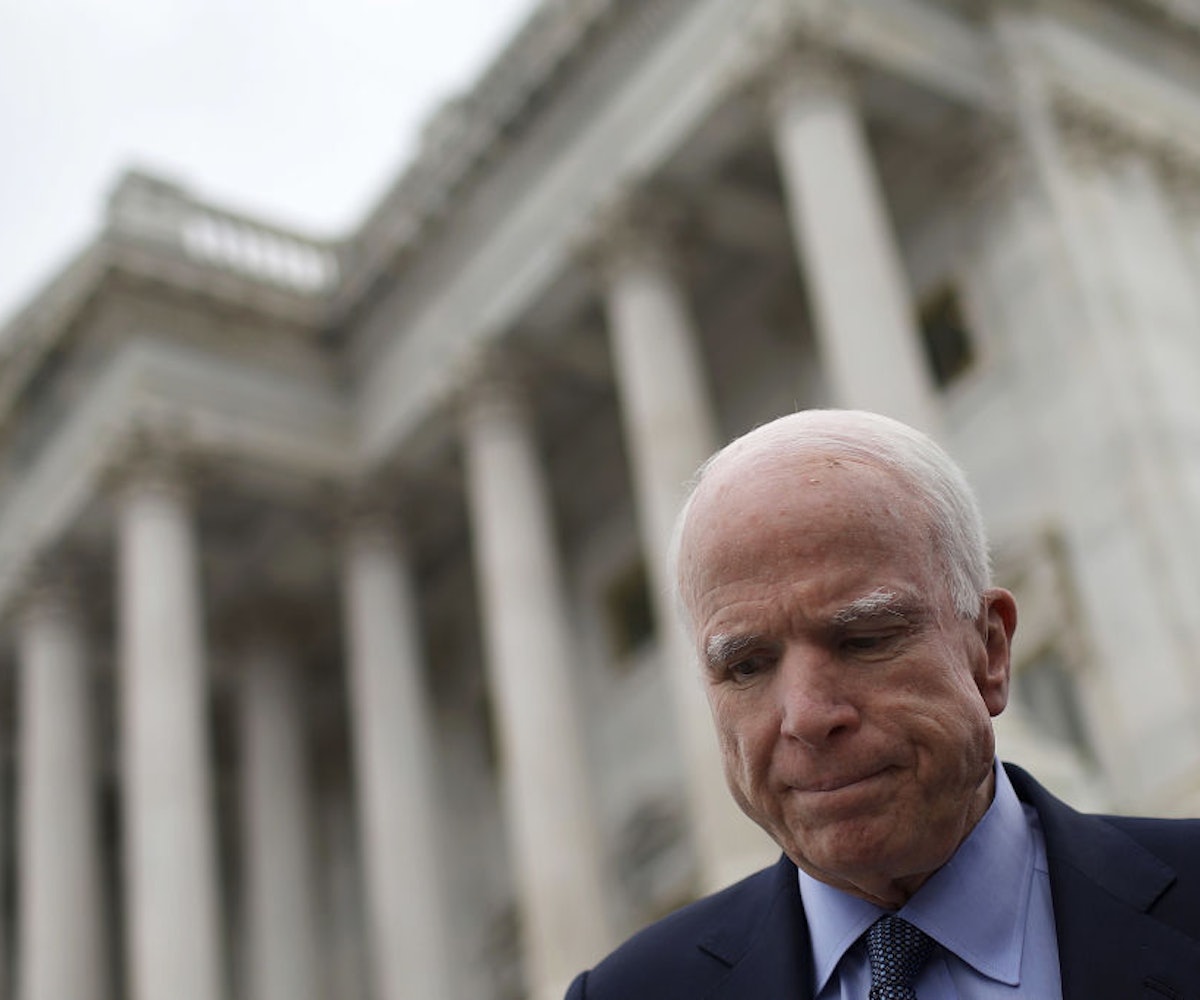 Today, following a tie-breaking vote by Vice President Mike Pence, the Senate agreed to begin a debate on a bill designed to repeal many provisions of the Affordable Care Act. As the New York Times reports: "The 51-50 vote came only a week after the Republican effort to dismantle a pillar of former President Barack Obama’s legacy appeared all but doomed."

The effort to move forward on the debate seemingly took a hard hit last week when it was announced that Republican senator John McCain was diagnosed with aggressive brain cancer, had undergone an operation, and would be receiving treatment. Outpourings of support for McCain came from all points on the political spectrum, with Barack Obama and Hillary Clinton offering eloquently worded best wishes, and Donald Trump saying, "Get well soon." (Because brain cancer is totally just like having a bad cold.)

Despite personally loathing McCain due not only to the facts that his voting record is atrocious (he was one of a small minority of congressmen to vote against making Martin Luther King Day a federal holiday) and he once viciously mocked the physical appearance of a teenage girl, but also because he attempted to put Sarah Palin a mere heartbeat away from the Oval Office, even I felt slightly bad that a tweet I made making fun of McCain's spaciness during the Comey hearing might actually have been a tweet making fun of the tumor effecting McCain's brain. I got over it, though, because then I remembered all the ways in which McCain has supported Trump and his despicable agenda and just thought to myself: Retire, John.

But perhaps buoyed by all the well wishes from supposedly liberal politicians who just can't get enough of McCain's "maverick" ways, the senator from Arizona flew to Washington, D.C. today solely to participate in the Senate vote and guarantee that this atrocity of a healthcare bill (which mainly functions as a tax break for the wealthy, and a means of dismantling the first black president's crowning policy achievement) would be up for debate. In doing so, McCain managed to shock countless alleged political progressives on Twitter, who just couldn't believe that even though McCain himself benefits from excellent health insurance thanks to his government job, he has no qualms with risking the health insurance of millions of other Americans, who have nothing like the multiple safety nets a millionaire like McCain has in place.

Some people are pointing out that after voting yes today, McCain made a speech which seemed to indicate that he would vote no on an actual bill. To those people, I ask: What more proof do you need that John McCain is not a hero? While it is true that today's vote was only about debating the potential repeal of the ACA and that the ACA is not dead yet, it is also true that the debate could have been prevented if McCain had voted no or abstained from voting. And for anyone who still wants to cling to the idea of McCain as a hero because of his military service in a war that America should never have been a part of anyway, let's be really clear here: A hero does not risk the lives of millions of others in order to line the pockets of millionaires. A hero does not make a decision that threatens the rights of childhood cancer survivors to get health insurance as adults and then immediately backtrack saying that he feels terrible about that decision. John McCain is no hero, that much has been clear for some time. But today's vote just made it clearer than ever before.