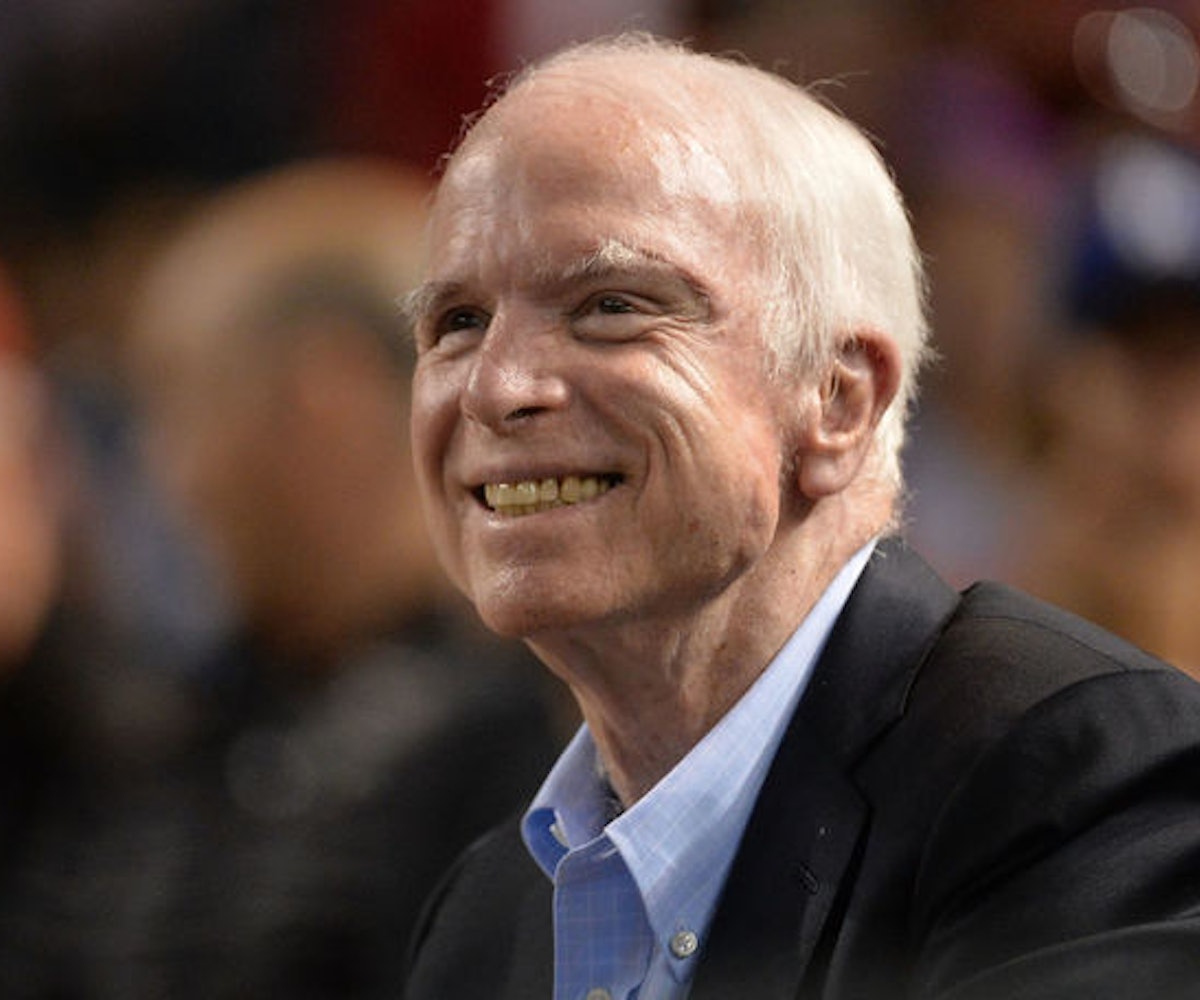 Early this morning, as he is wont to do, Donald Trump tweeted that “Rand Paul, or whoever votes against Hcare Bill, will forever (future political campaigns) be known as 'the Republican who saved ObamaCare.'" Whether he is right or not (he might be!), this afternoon, Senator John McCain once again claimed that mantle. This afternoon, he announced that he would be voting against the Graham-Cassidy bill that had been gaining steam over the last week, likely sinking the GOP’s latest—and probably last—effort to get rid of Obamacare. It’s a stunning rebuke, not just because senators rarely vote outside party lines, but because McCain is BFFs with Lindsay Graham, the South Carolina senator who drafted this bill alongside Bill Cassidy, senator of Louisiana.

“I cannot in good conscience vote for the Graham-Cassidy proposal,” McCain said in a statement. “I believe we could do better working together, Republicans and Democrats, and have not yet really tried." But McCain was not done there. It’s fun to imagine Graham reading the rest of this. “Nor could I support it without knowing how much it could cost, how it will effect insurance premiums, and how many people will be helped or hurt by it. Without a full CBO score, which won’t be available by the end of the month, we won’t have reliable answers to any of those questions.” McCain is basically saying what every member of the GOP knew privately but refused to say publicly.

McCain has said in the past that he believes that bills as important as this one require a healthy process of debate and deliberation before being voted on, as opposed to the sketchy, rushed approach Republicans have chosen with Repeal and Replace. McCain’s vote does not officially sink the bill, as his dramatic no vote on the last one did. But as of now, Lisa Murkowski, Susan Collins, and Rand Paul are all expected to vote no, and unless Republicans can somehow turn them to the dark side, Graham-Cassidy is all but dead in the water. Somewhere, Jimmy Kimmel is surely smiling.

As I have repeatedly stressed, health care reform legislation ought to be the product of regular order in the Senate. Committees of jurisdiction should mark up legislation with input from all committee members, and send their bill to the floor for debate and amendment. That is the only way we might achieve bipartisan consensus on lasting reform, without which a policy that affects one-fifth of our economy and every single American family will be subject to reversal with every change of administration and congressional majority.

I would consider supporting legislation similar to that offered by my friends Senators Graham and Cassidy were it the product of extensive hearings, debate and amendment. But that has not been the case. Instead, the specter of September 30th budget reconciliation deadline has hung over this entire process.

We should not be content to pass health care legislation on a party-line basis, as Democrats did when they rammed Obamacare through Congress in 2009. If we do so, our success could be as short-lived as theirs when the political winds shift, as they regularly do. The issue is too important, and too many lives are at risk, for us to leave the American people guessing from one election to the next whether and how they will acquire health insurance. A bill of this impact requires a bipartisan approach.

Senators Alexander and Murray have been negotiating in good faith to fix some of the problems with Obamacare. But I fear that the prospect of one last attempt at a strictly Republican bill has left the impression that their efforts cannot succeed. I hope they will resume their work should this last attempt at a partisan solution fail.

I cannot in good conscience vote for the Graham-Cassidy proposal. I believe we could do better working together, Republicans and Democrats, and have not yet really tried. Nor could I support it without knowing how much it will cost, how it will effect insurance premiums, and how many people will be helped or hurt by it. Without a full CBO score, which won't be available by the end of the month, we won't have reliable answers to any of those questions.

I take no pleasure in announcing my opposition. Far from it. The bill's authors are my dear friends, and I think the world of them. I know they are acting consistently with their beliefs and sense of what is best for the country. So am I.

I hope that in the months ahead, we can join with colleagues on both sides of the aisle to arrive at a compromise solution that is acceptable to most of us, and serves the interests of Americans as best we can.