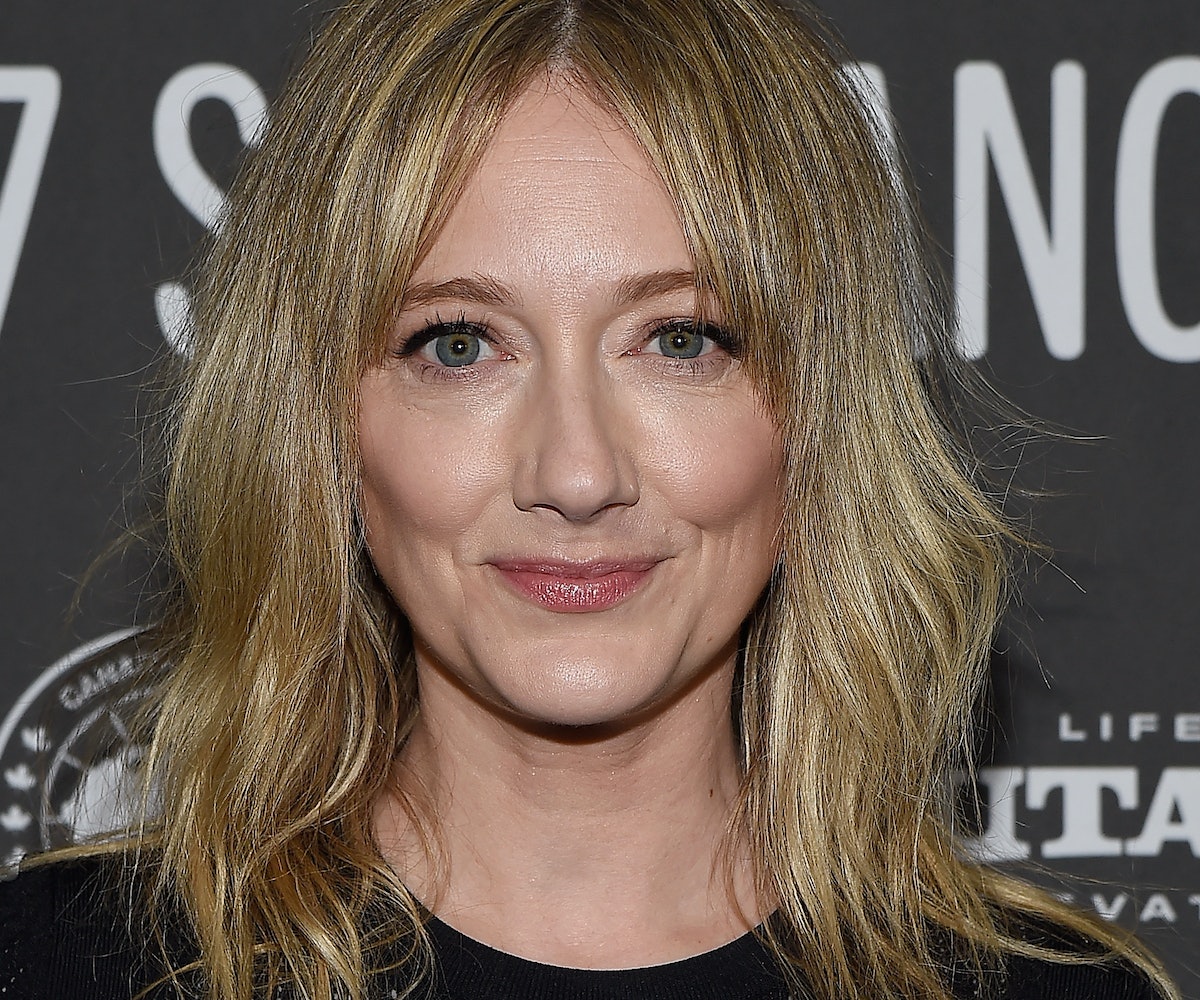 Judy Greer has pretty much done it all. She’s had on-screen dalliances with Nicolas Cage and David Duchovny. She’s been to the Planet of the Apes, Tomorrowland, and Jurassic World. Whether she likes it or not (and she mostly likes it), she’s fully laid claim to the “kooky best friend” archetype, a pillar of the modern romantic comedy. It’s all in a career’s work for one of Hollywood’s most reliable character actresses, the sort of familiar face that pops up everywhere once you start looking for it.

Before she makes her return to the rebooted Planet of the Apes franchise for the third installment (playing a motion-capture primate), Greer goes indie with a clutch role in Wilson, the new adaptation of Daniel Clowes’ comic strip chronicling the various exploits of a lonely and slightly off adult man. Greer acts as a tonic for the curmudgeonly title character, appearing as a bubbly friend who agrees to look after his dog and eventually strikes up a romance with Wilson (played in the film by Woody Harrelson). The role was a balancing act, requiring warmth and firmness, but, of course, Greer made mince meat out of it. In a career where no two roles offer the same challenge, it was just another day on the job.

Your character meets Wilson because she agrees to look after his dog. Are you yourself a dog mama?

Yes. I love dogs, must love dogs. I wouldn’t say I "work with" them, but I help out at a dog rescue. I really believe strongly in the goal that Best Friends Animal Society has, which is a no-kill nation by 2020—no more kill shelters. I could go on and on about dogs. I have one, she’s terrible, her name is Mary Richards after Mary Tyler Moore’s character on The Mary Tyler Moore Show.

So then, getting to work with dogs on this production was kind of a perk?

Oh yeah, big perk. But working with them isn’t like hanging out with them. Dogs at work aren’t really allowed to play and have fun and do silly things. Even if there’s a minute of downtime and Pepper was there, maybe while they were moving a light or something, I couldn’t play with Pepper. I technically could, but Pepper does not give a shit about me.

Looking through your recent work, it’s pretty evenly mixed between small-scale projects like this and studio jobs. Do you do one to afford the other, or do you find ways to enjoy it all?

I don’t make a ton of choices based on money. I definitely should. But I’ve been lucky to work with really great people, and then I’m fortunate enough that some of the people I work with move on to direct big giant franchise movies. I knew Colin Trevorrow from his indie work, and then he brought me with him when they hired him for Jurassic World.

Does the size of a production have any bearing on your process as an actress?

I don’t really feel a difference, not in how I perform. I really messed up on day one of Ant-Man, though. They told me, “Judy, some early press is here, can you be cool?” And I was like, “Yeah, totally.” One of the reporters took me aside and asked my favorite comic book hero, and I don’t remember what I said, but I do remember I did not say a Marvel person. The guy said, “Yeah, that’s DC, you may want to rethink that answer,” and I just thought, “Oooh, fuck.” So I called my agent and freaked out, and he told me I should’ve said Ant-Man, and I told him I thought that would’ve been too obvious—it was a whole big thing. Next day, FedExed to me was a big hardcover encyclopedia of Marvel characters.

What attracted you to Wilson, then?

I was attracted to Woody Harrelson. In a physical way. Like, helloooo.

No, I was attracted to the story of this person who, I think, is easily misunderstood. I hear people think he’s a misanthrope, but there’s more to it. He loves people, and he wants to talk to everyone. I find that he has high expectations of people and that he wants people to be their best selves, and he’s gonna tell them how to do it. I’m attracted to that quality in people in general.

I also wanted to ask about Archer, which is coming back soon for season eight. Is recording the show as fun as I imagine it to be?

It’s really fun to record Archer, in part because I can wear whatever I want and nobody sees except Josiah, the recording engineer, who’s always like, “Please don’t come here right from working out. You smell in my booth.” He loves me, and I love that part of my job. The cast can’t record together, with everyone on different schedules, but I sometimes fantasize about how much fun it would be if we could. And then when we do Archer live, I see that it would be a disaster, and everyone would be blackout drunk before we finished recording the episode.

What does it feel like being one of those “oh, it’s that lady!” actresses? Is that take on your career at all frustrating?

Definitely not frustrating, because I’ve been so blessed even though I don’t really believe in God, so it’s more like that actress-y "blessed," hashtag gratitude, all that—I can’t take it. But I’m thankful for having an awesome career and the ability to shop at Target or get drunk at a bar without it ending my career or whatever. I’d love to talk to these other character actors and ask if they ever really wanted to be the big star. People ask why I never wanted to be the star, and I’m like, “Dude, it’s not like we didn’t want to. It’s not like I turned that down. That’s just how it happens sometimes.” But I do feel like I’ve got insane company on this level of my career. I feel lucky to still be working, and still getting great roles, and still being able to build my house.

Is that a metaphor?

No, literally, my husband and I are renovating our house together right now, and I can only afford to do that because I work a lot. The only thing that’s sometimes frustrating is losing roles. I don’t wanna name any names, but I just auditioned for a movie, and it went to this other girl because she’s more of a… whatever. And for all I know, her audition was better than mine. But in the event that they’re the same, it would go to her, because some actresses just have more marketability. Sometimes there will be a big movie that I think I’d be perfect in and it goes to an A-list actress, and I’m like, “That’s my bread-and-butter role! And it’s supporting! I could do that.” But that’s the same with any job. People in offices think, “Grr, why’d he get the promotion and not me?” Well, if it was me and a dude, I’d probably know why, actually.

In one scene in Wilson, you loosen up Harrelson with some therapeutic massage. Care to comment on that experience?

Well, I do kinda give a great massage. I was giving Woody a massage, and kind of doing it how I massage my husband, and I got a little paranoid that I was hurting him. He was like, “Ha ha, hey, you got some strong hands.” And I worried I made him hate me because I was massaging him too intensely. And it’s like eating ice cream, in that you remember, "Oh, we have to do this for a while, I can’t go full force on every take."

I never really thought about the mechanics of eating food onscreen.

Watch from now on. I watched a movie on the plane ride over here, and there’s a big feast scene. They have spit buckets but watch what people have on their forks. It’s like [mimes using forks to eat what appears to be a single pea]. Oh, but I recently saw Loving, and there’s a big scene where they’re all sitting down at the dinner table and you can see everyone’s going to town. It was like, “Thank you, yes! This is how people eat!” And that is the reason that that is a great movie.

What’s the role you’ve been recognized for most when you’re out and about?

Still, weirdly, 13 Going on 30 slash The Wedding Planner. Those movies are old! I’m curious about what people’s favorite romantic comedies are. I’d like to take a nationwide poll.

What do you think about the current state of the romantic comedy?

Bridesmaids was a romantic comedy, and it was also about friends. With a coming-of-age angle, too, because every romantic comedy has the montage where the girl pulls her shit together. She resolves not to let stuff happen to her anymore! We gotta bring that back. Romantic comedies need to come back in a big way.