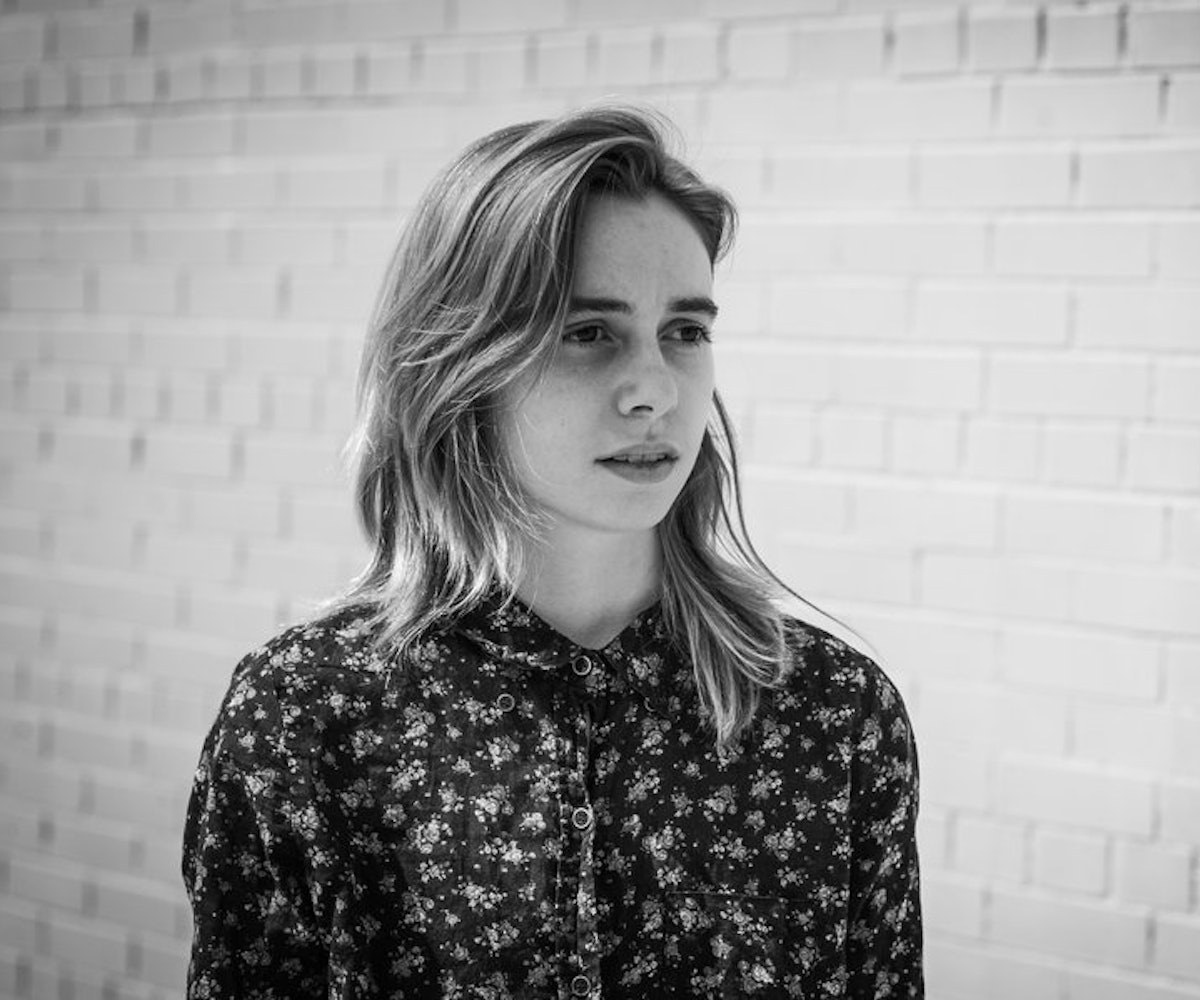 Julien Baker's music is a study in contradiction, both fragile and steely at the same time. Her song "Brittle Boned," which we're premiering here, begins starkly and painfully until it emerges as something defiant and even triumphant. The song comes off Baker's upcoming album,

, a collection of raw confessionals that marks the 19-year-old's emergence as a solo artist. While growing up in Memphis, Baker played in a band with her friends called Forrister, but when college took her to another town, her necessity to create saw her pick up a guitar and go at it on her own. She didn't plan on releasing a solo album, but we're glad that she did.

Oh wow, I have no idea. I asked my friends for help, and responses included, "level-one runescape clothes" and "mallrat trash monger." Not sure if this refers to my appearance, sound, or personality; I think as a person, I could say my existential aesthetic is "one giant coffee stain." As far as my music goes, I jokingly call it "sad bastard music," but that may be a little profane. I mean, it's pretty sad, truthfully. Just reverb-soaked sadness music. I hope that appropriately answers the question—I've never been good at describing my work.  My apologies for not having a clear response!

I started playing music when I was very young and have been playing shows either with myself or the band I am in, Forrister, since I was in junior high. The very first gigs I played were at Otherlands Coffee Shop in Memphis and later, I played house shows really often with the band in high school. I don't know what I could point to that constitutes the start of a formal "career" as much as just steadily touring, releasing, and performing since my youth.

Right now, I just hope to be out of school and supporting myself with music and/or other artistic pursuits to the point where I can fully devote the energy and care I want to give to producing more art.

As of now, I am not sure! I have been pretty preoccupied with the release of Sprained Ankle, but I am always steadily writing more material and staying plugged in as much as I can with my musical peers. With school, though, I always end up being marginally involved in many smaller things peripheral to music; right now, I am working on some formal essay submissions through my school's Lit department, and later I'm hoping to start helping one of my friends who is organizing a local art collective and zine. Smaller endeavors like that help me stay motivated and inspired in different ways.

That's a tough one! In a shallow way, the NPR feature of my song was a surreal experience—that is the coolest thing to me. I think when I released the first full length with Forrister (then The Star Killers), it was a one of the greatest musical accomplishments. We were in high school at that point, it was a local, independent release. But to have created something ourselves that our friends and community responded to was so meaningful, and it made me sure I always wanted to pursue music so I could keep doing that.

Perhaps a guilty admission, but as far as famous people go, probably Demi Lovato. Love her music—"Skyscraper" is a fave post-heartbreak power anthem. But she also gives off a vibe like she actually has her mess together, and I respect her speaking so candidly about sobriety, recovery, and things of that ilk.

I would have to say Springsteen. Nothing like driving around listening to The Boss.

Someone like Sufjan Stevens or The National. To me, those artists have always maintained their artistic vision and integrity, and have consistently released great records. Not to mention, they put on a great show

Reading, drawing, walking. I am studying or reading for my courses, so I find myself doing solitary reading or writing quite often. But alone time is still very important to me, so I try to set aside a period in the morning to read or pray, or just think before I take on the day.

In the morning when I am walking to work and it is really still and quiet—too early for anyone to be around, and I can just kind of observe things in a calm way. I find that very relaxing.

I was really outgoing, but kind of weird, for sure. I had a ridiculous mohawk with a rat-tail that I bleached and dyed weird colors. I did stupid teenager stuff like pierce my friends' lips with a safety pin and get a home tattoo. But I wasn't violent or reckless, and I actually did really well in school. Me and an old friend and fellow guitarist actually won homecoming King and Queen by some fluke, which was just hilarious. I feel like it was a very cliche punk-rock-rebellion trope, but then again, high school is the most apt time for being that, so perhaps it's fitting.

Car crashes. I absolutely hate traffic and chaotic driving situations—especially on the highway. When I am in the passenger seat, I always get so anxious—I just have to look away, to the frustration of some of my friends.

People are probably unlikely to know how big of a space my faith occupies in my life. It's discussed within the lyrical content of my songs, but it doesn't come up in the regular dialogue of the music scene very frequently—which is okay. I don't often explicitly state it, because I want to stay away from any perceivable pedestal. But truly, my faith and spirituality is a source of inspiration, hope, and peace that is crucial to my life and a huge part of my personality.

I would love to spend more time working on music and writing organically as opposed to piecing together songs mechanically, which I think will be easier with a little more free time.

Lately, I have been trying to frame things in a positive way, and have been using an Alexander Pope quote that really struck with me that might be applicable, it goes: "All discord, harmony, yet understood; All partial evil—universal good."